Welcome to my series of posts on THE VIKING AGE!!

Odin is the Norse god of wisdom, death, and the runic alphabet. He is also known as Woden in English and Wuotan in German.

Old Norse texts portray Odin as one-eyed and long-bearded, frequently wielding a spear named Gungnir and wearing a cloak and a broad hat. He often rides a flying, eight-legged steed Sleipnir and is often accompanied by the two ravens Huginn and Muninn ("thought" and "memory") who bring him information from all over Midgard (Earth).

Odin also rules over Valhalla ("Hall of the Slain") in Asgard (the world of the gods), which is a hall to which fallen warriors go after they die. 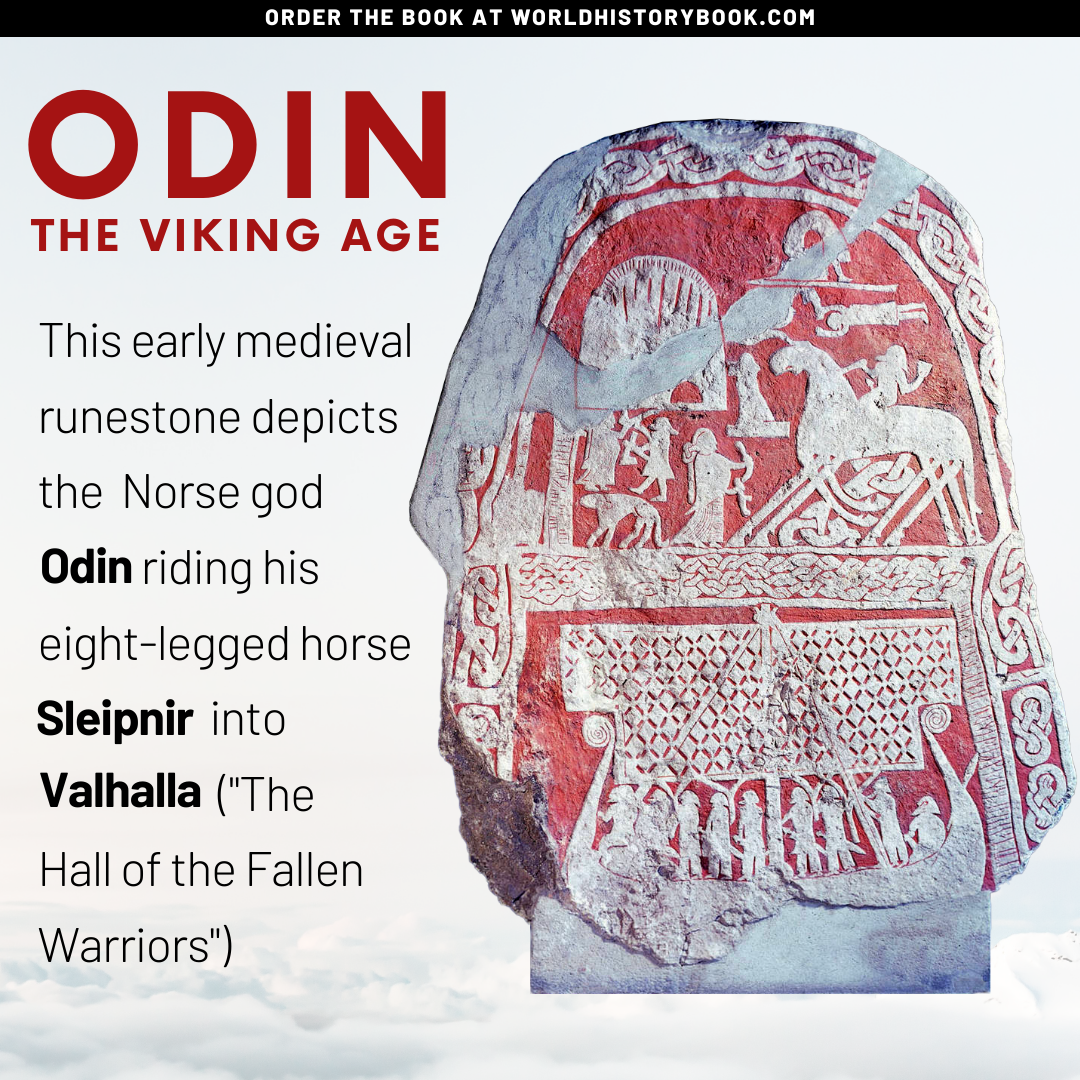 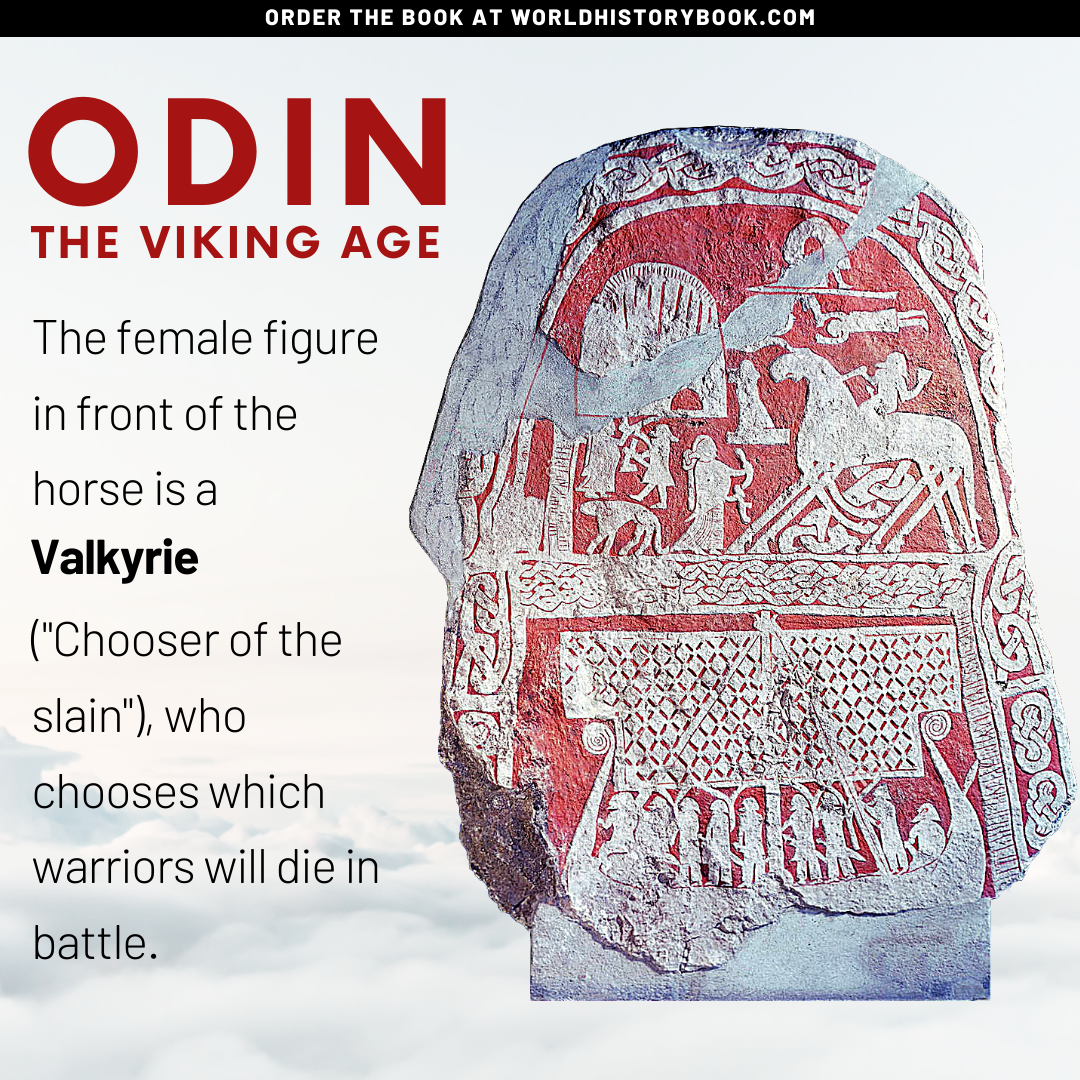 Odin is the Norse god of wisdom, death, and the runic alphabet. He is described as having only one eye. He had traded his other eye in exchange for drinking from a well of wisdom, guarded by the giant Mimir. The well was said to be located beneath one of three roots of the world tree Yggdrasil.

Odin as often disguised himself, wearing a cloak, and a broad hat. This allowed him to travel the world without revealing his idenity. Tolkien, the author of the Lord of the Rings, claimed to have modelled Gandalf in an 'Odinic wanderer.'

In the image, we see Odin riding his flying, eight-legged horse Sleipnir and wielding a magical spear named Gungnir. In other images, he is often accompanied by the two ravens Huginn and Muninn ("thought" and "memory") who bring him information from all over Midgard (Earth). 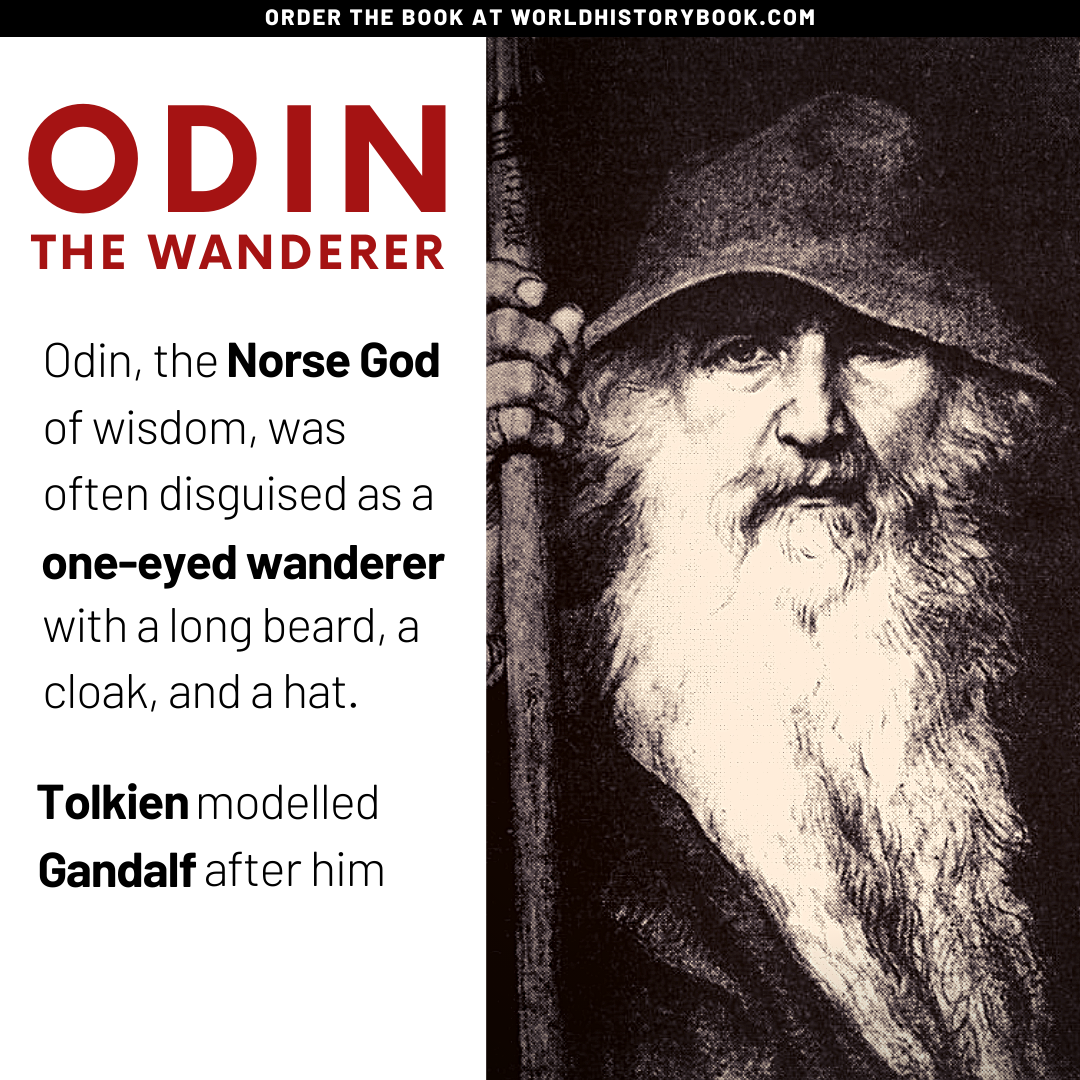 The Viking Attack of Lindisfarne

The Viking Age started in 793, when the Norsemen from Scandinavia made their first signifcant attack on the rest of Europe.

Their first attack was on the famous monastery of Lindisfarne—one of the most important centres of early English Christianity. Irish monks had settled here in AD 635 and the monastery became a great center for learning. The masterpiece now known as the Lindisfarne Gospels was created here in the early 8th century (gorgeous Celtic images!).

The ruins in the image are in Lindisfarne, but belong to a now a 12th-century priory, which claimed direct descent from the early monastery.

The quote is by the scholar Alcuin of York, he had also worked in the famous Aachen school of Charlemagne. 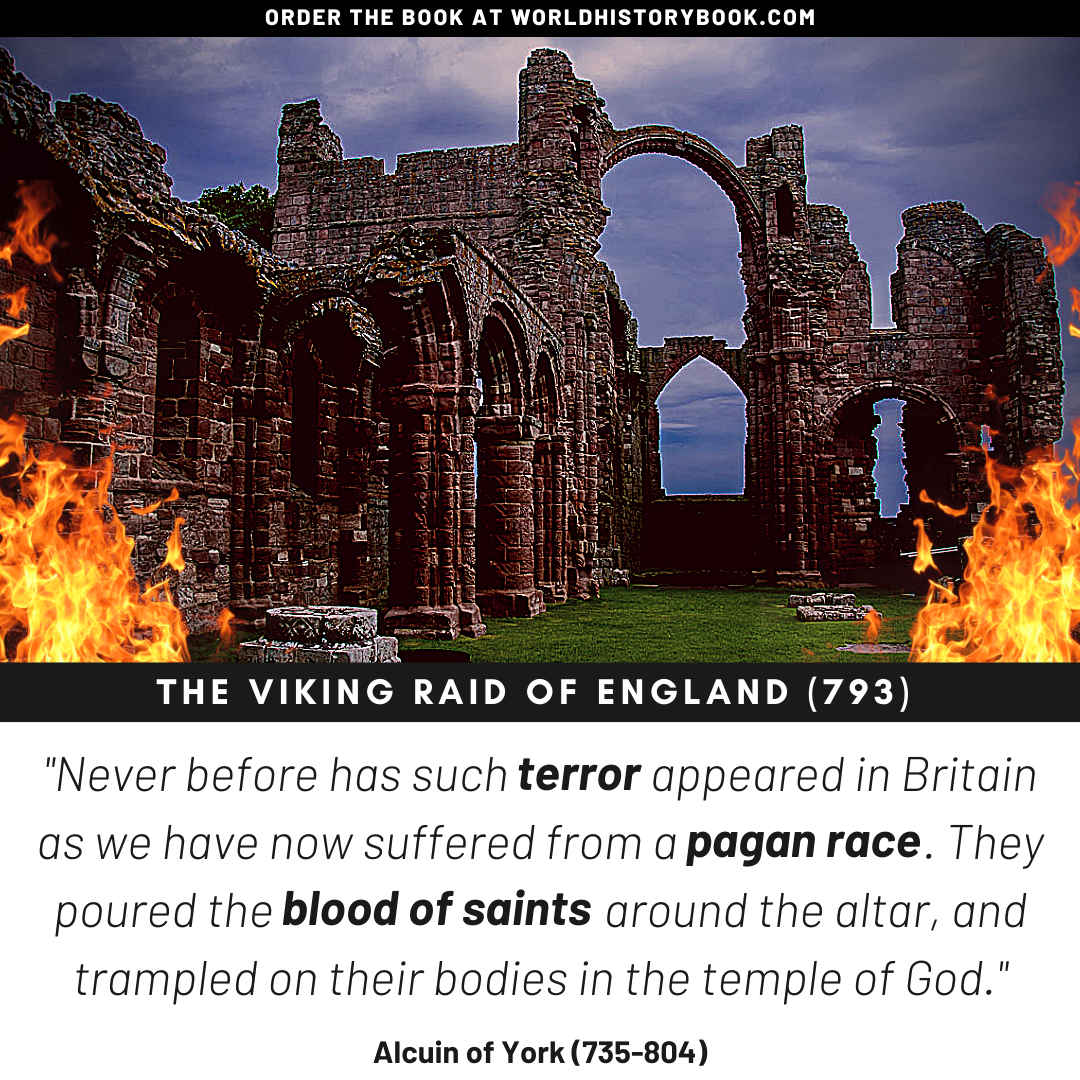 During the early Middle Ages, Western Europe came under attack from many sides. There were the Arabs, the Hungarians, but the enemy that frightened them the most were the Vikings. Viking raids could appear as from nowhere, as they had managed the skill of sailing in open waters without land in sight.

The Vikings set out on large-scale raiding, colonizing and conquest and soon dominated large parts of Europe (as we will discuss in later posts).

Their raids often targetted monasteries, as these were places were rich booty could be expected, while these places were not as well defended as cities (an example of such a raid can be found in the previous post).

The poem in the picture, from a 9th century Irish monk, describes the fear for the sudden appearance of the Viking dragon ships on their shores. We read that the people can finally sleep without worry, as the seas are too wild for the the Vikings to sail in.

The photo depicts the reconstruction of the Oseberg ship. A well preserved Viking ship from about 800 AD. 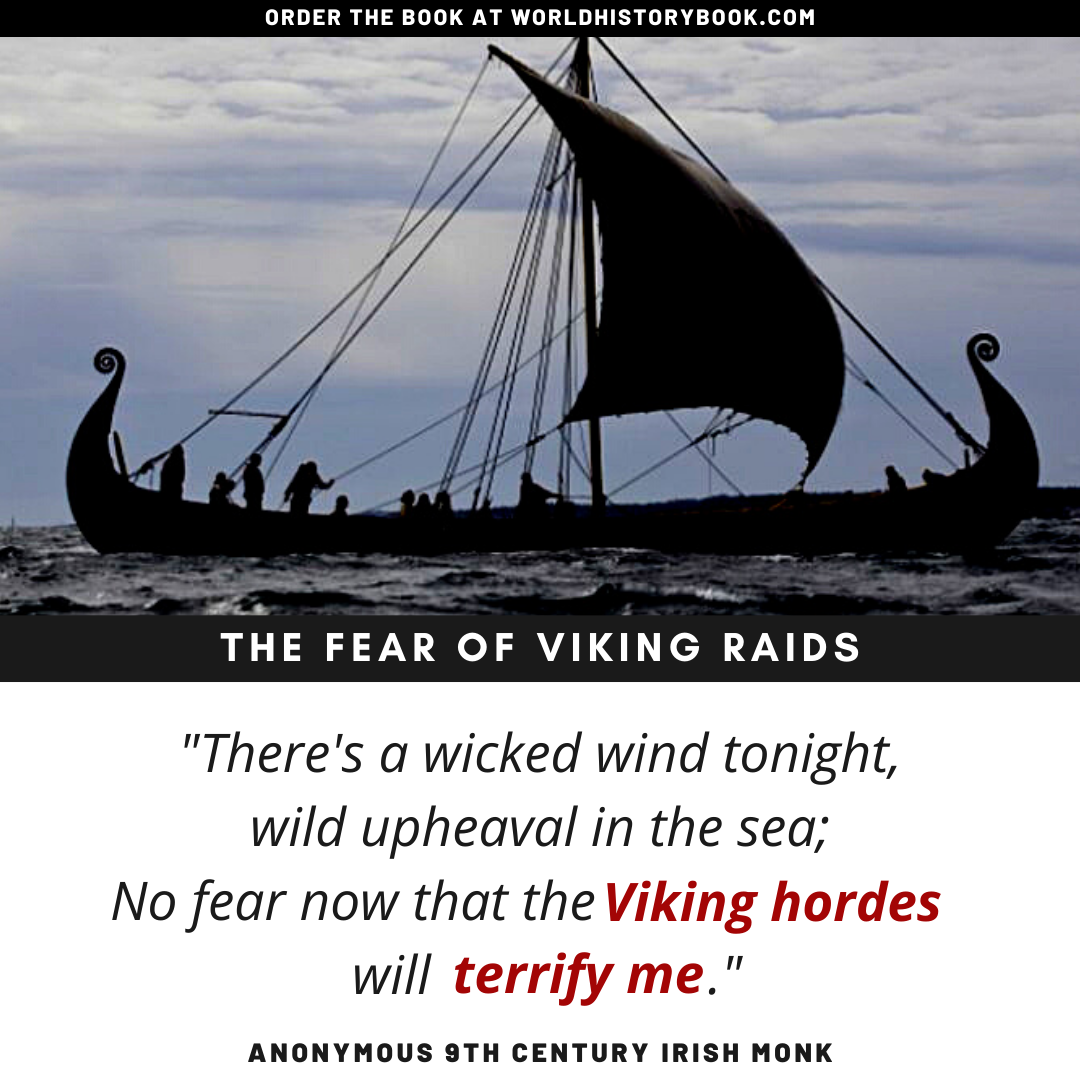 The Oseberg ship from around 800 AD is the best preserved Viking ship. It was used as part of an elaborate burial.

The Viking ships were sometimes called dragonships, since according to sources of the time, they often had a dragon carved out at the tip of the boat. This one has a coiled serpent (you will find at the top of the image).

Unfortunately, a real dragon tip has never been found. The dragon depicted in front is one of the grave goods. Its purpose is unknown. 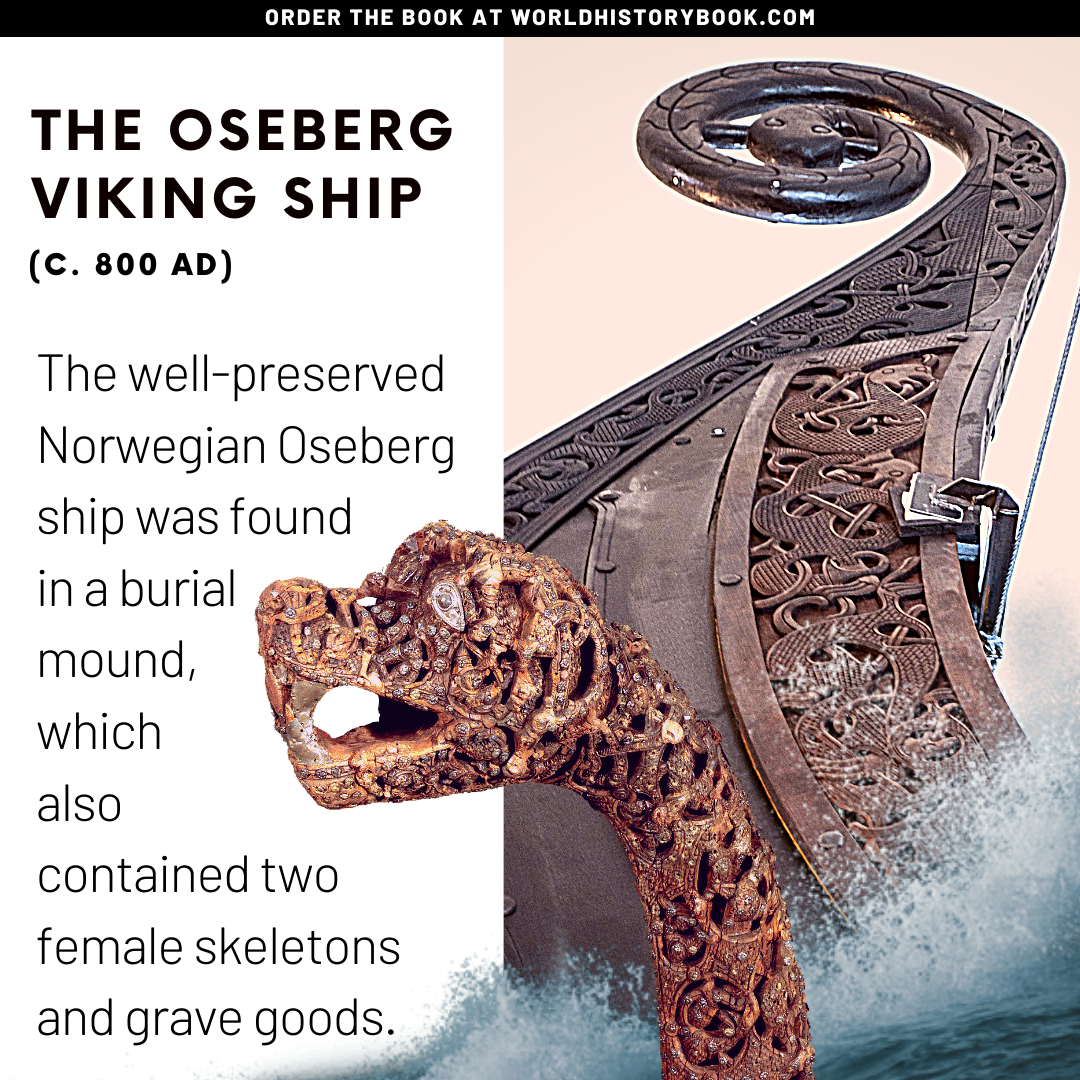 The Viking Takeover of England

Such great Viking names! So Harald Bluetooth (after which the modern bluetooth is named) was king of Norway and Denmark. He had a son named Sweyn Forkbeard, who in 1013 took over England, forming the North Sea Empire. His victory, however, was shortlived. In 1016, his son had to redo the attack and also took over England, which he kept till 1035. His successors finally lost in 1042, when the Saxons took over England. The Saxons finally lost control once more in 1066, when the Vikings of Normandy (France) took power, making French the official court language. In 1154 all the way up to 1485, the house of Anjou (another province in France) took power. 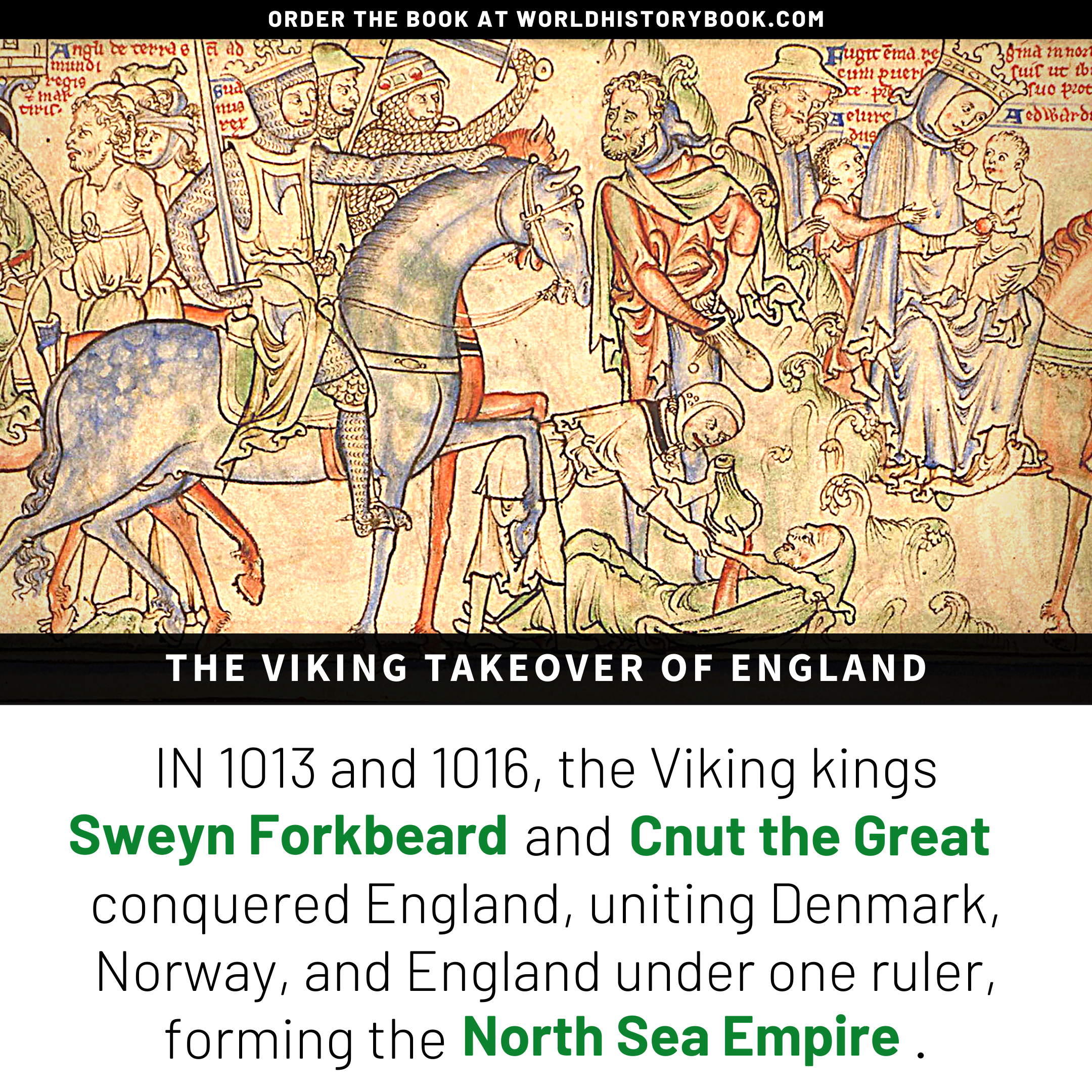 The Vikings also conquered a coastal province in northwestern France, now known as Normandy (Land of the Norseman). In 1066, the Norman William the Conquerer sailed to England and occupied the country once more!

His voyage and his battle are depicted on the famous Bayeux tapestry, that tells thw whole story like a comic book and is a stunning 70 meters long! The image depicted shows one small part, showing William sailing to England. Notice the Viking dragonship and the typical striped sails. 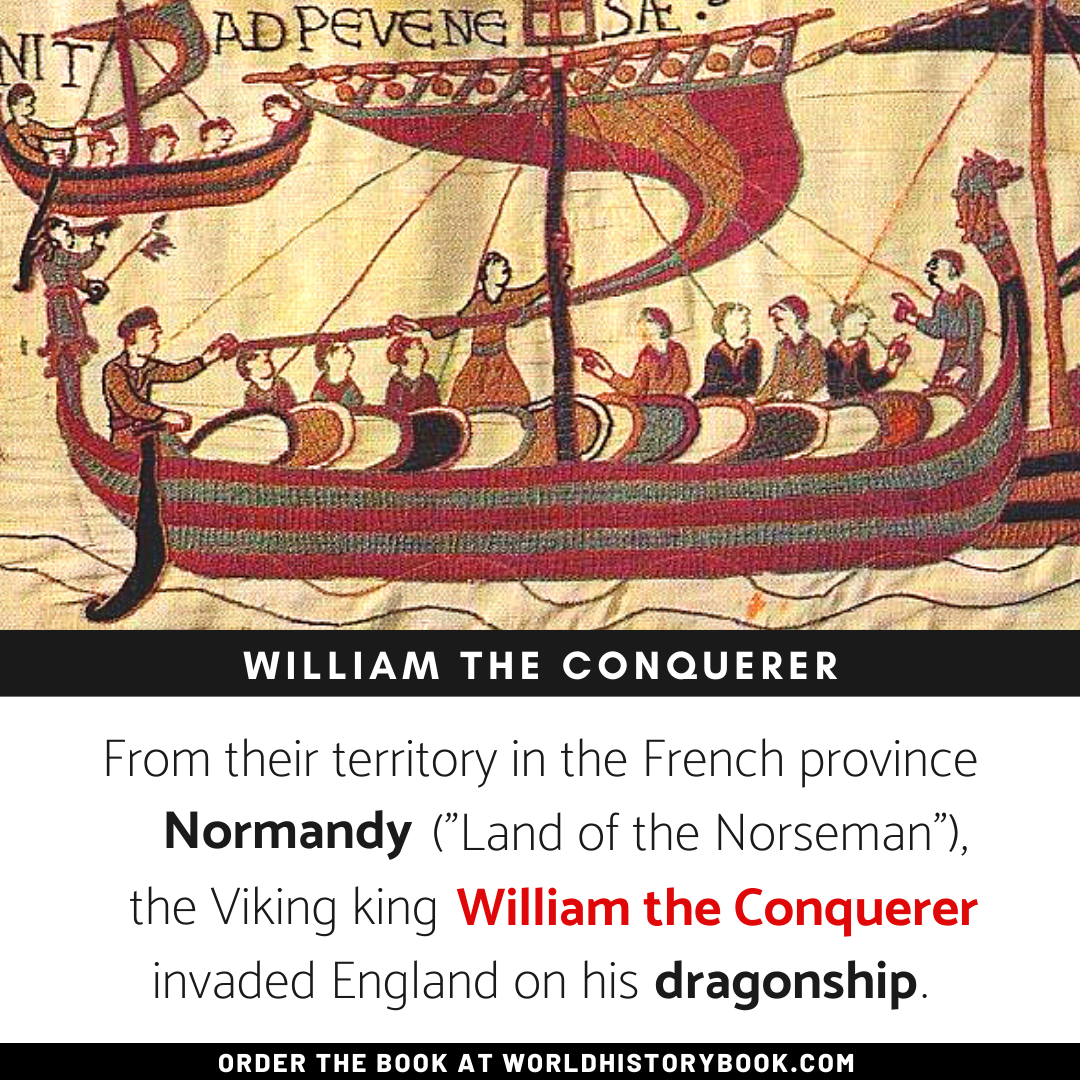 The reach of the Scandinavian Vikings was enormous. Besides terrorizing the Western European coast, they also headed all the way to Constantinople (modern day Turkey), which was at the time the capital of the Eastern Roman Empire, also called the Byzantine Empire.

Here they served in the Varangian guard, an elite unit guarding the Byzantine Emperor.

In the image they are depicted on top of a building with axes in their hands. 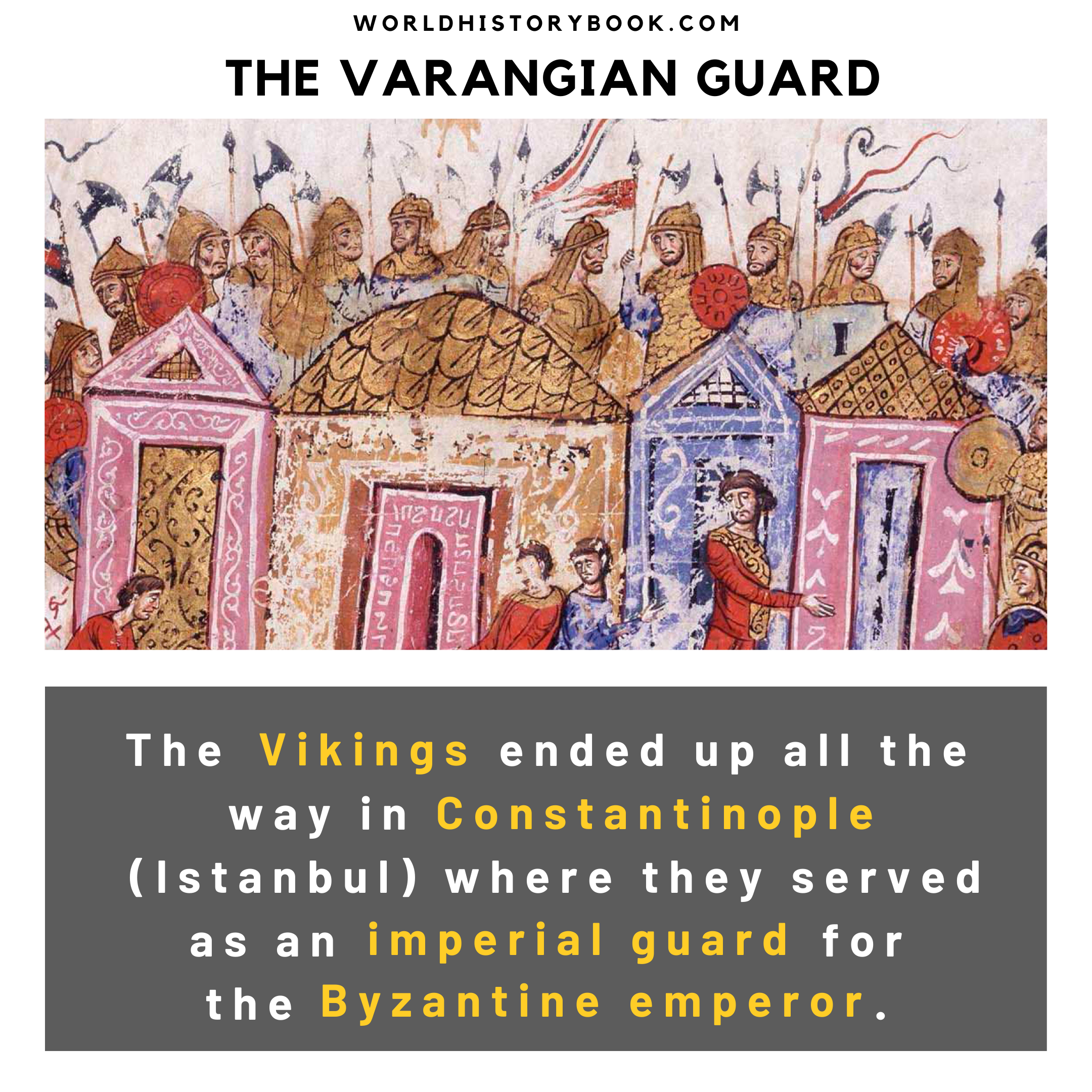 Erik Thorvaldsson (950-1003), better known as Erik the Red (so-called because of his hair color) was part of a family of great explorers.

Eric became the first scandinavian to settle on the island, where he started a community that would last for more than four centuries. He called the island "Greenland" to make the island sound appealing. This was a marketing tool to attract new settlers to his island. 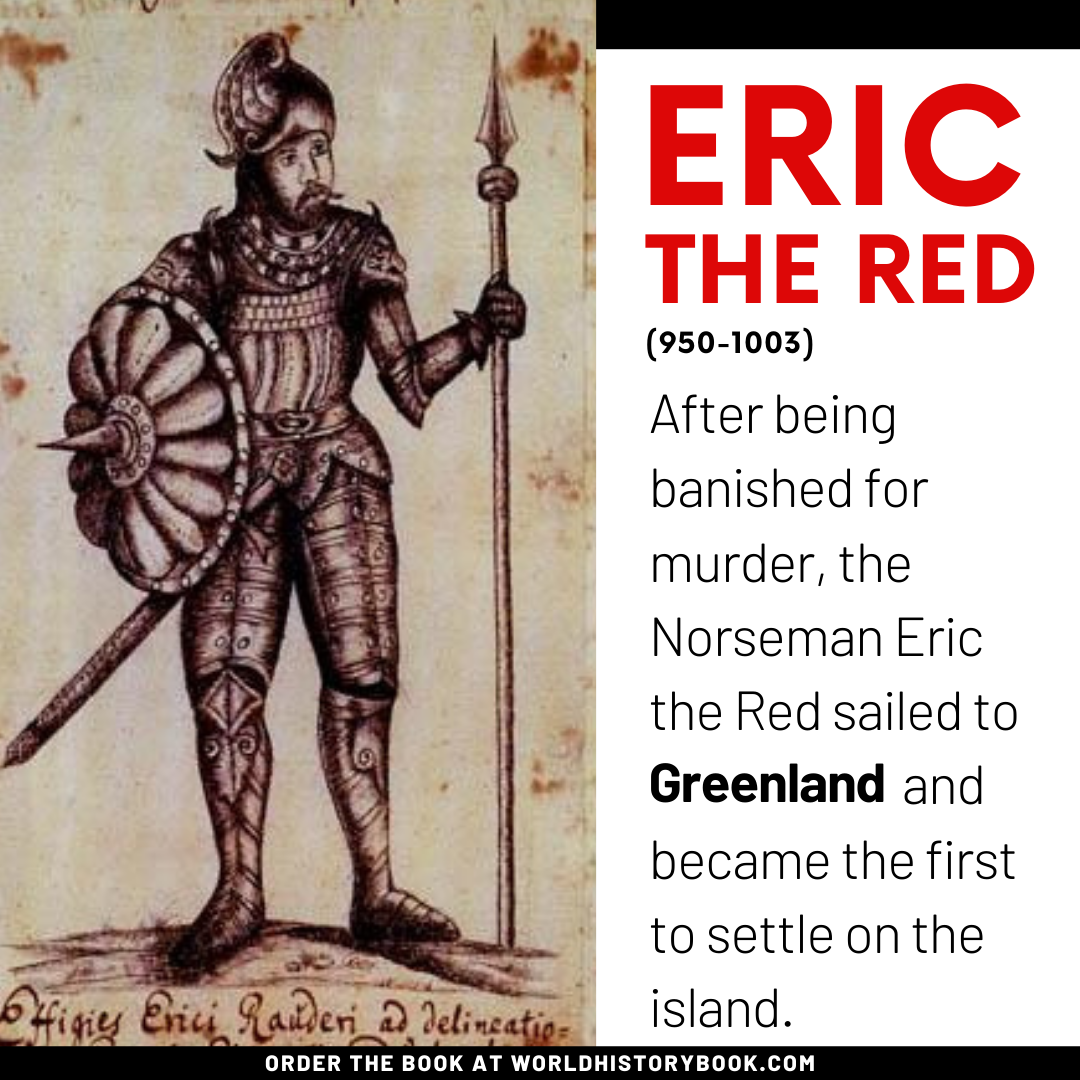 Already in the 10th century, the Vikings discovered America. Bjarni Herjolfsson wanted to visit his family on Greenland, but was blown off course and instead reached the coast of America.

Because he wanted to see his family as quickly as possible, he didn't go ashore. Once in Greenland, he told his story. His listeners accused him of a lack of curiosity for not having a look on land. Later other expeditions followed. 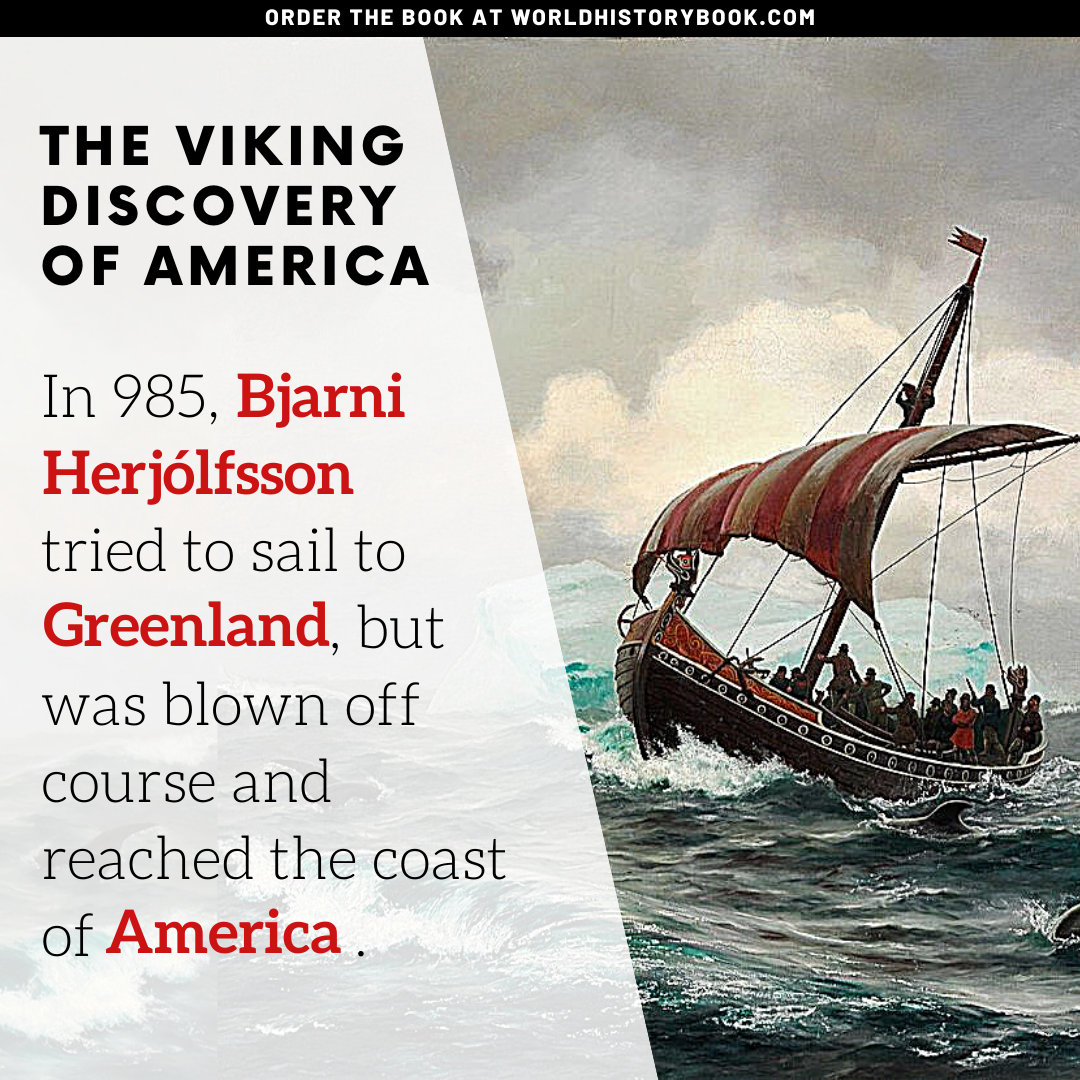 The Viking Bjarni (see the previous post) reached America, but didn't go ashore. Back home, he spoke about what he had seen, making others eager to explore. One of them was Leif Eriksson (c. 970-1020), son of Erik the Red, whose explorations at sea were recorded in the Saga of the Greenlanders.

Leif reached North America in 1001 AD with 35 men. They spend the winter there and build large houses. When one of his men found grapes on the island, Leif named America "Vinland". We read: "Leif named the land for its natural features and called it Vinland." 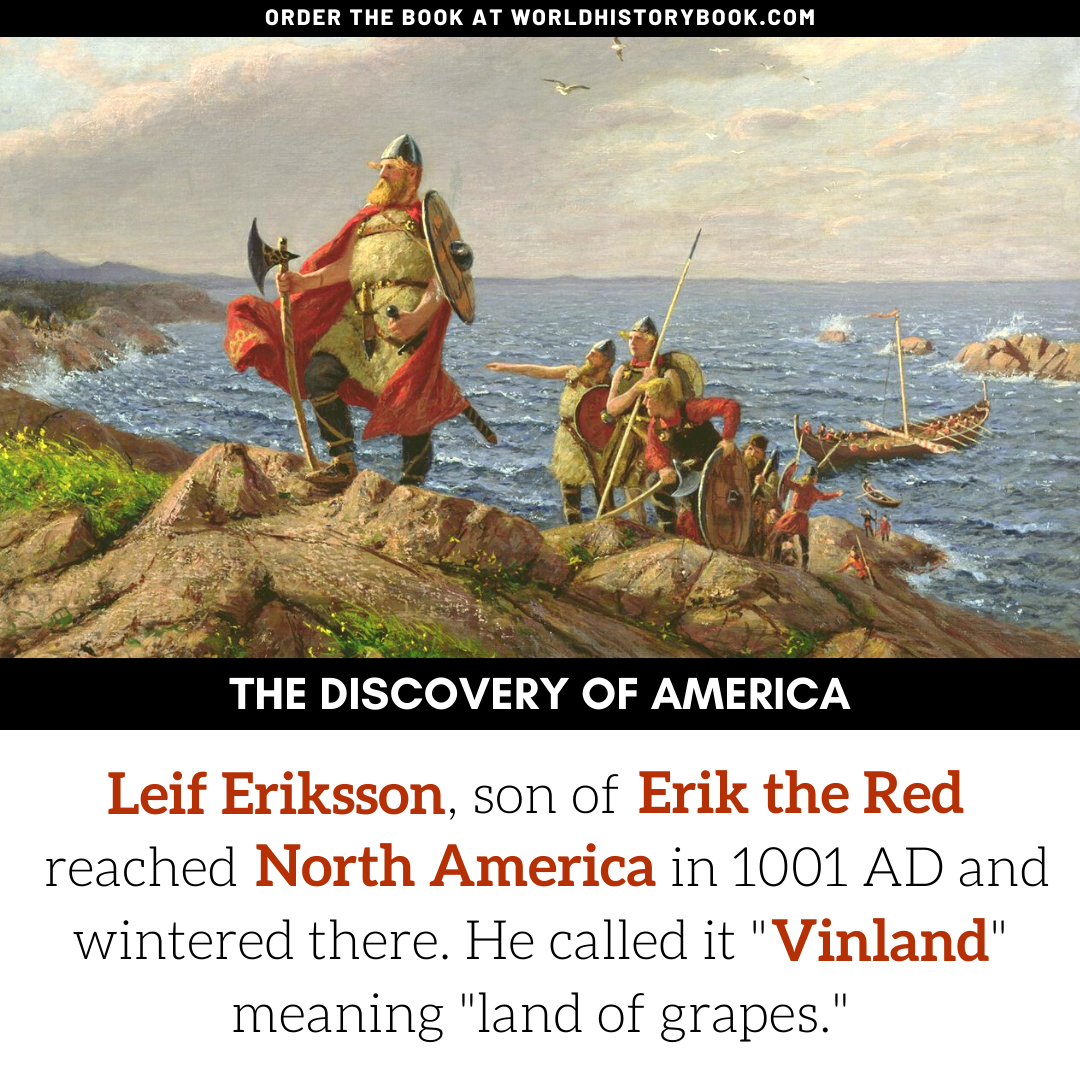 The Vikings Versus the Native Americans

After Leif Eriksson made his trip to America, his brother Thorvald did the same. His crew soon clashed with Native Americans. We read about these encounters in the 13th century manuscript called "The Saga of the Greenlanders".

At some point, they saw "three hide-covered boats with three men under each of them. They divided their forces and managed to capture all of them except one [...]. They killed the other eight.".

Soon after, a vast number of these boats came for them. The natives (called Skraelings by the Vikings) shot at them with arrows. Thorvald was hit: "An arrow flew between the edge of the ship and the shield into my armpit. Here is the arrow, and this wound will cause my death." 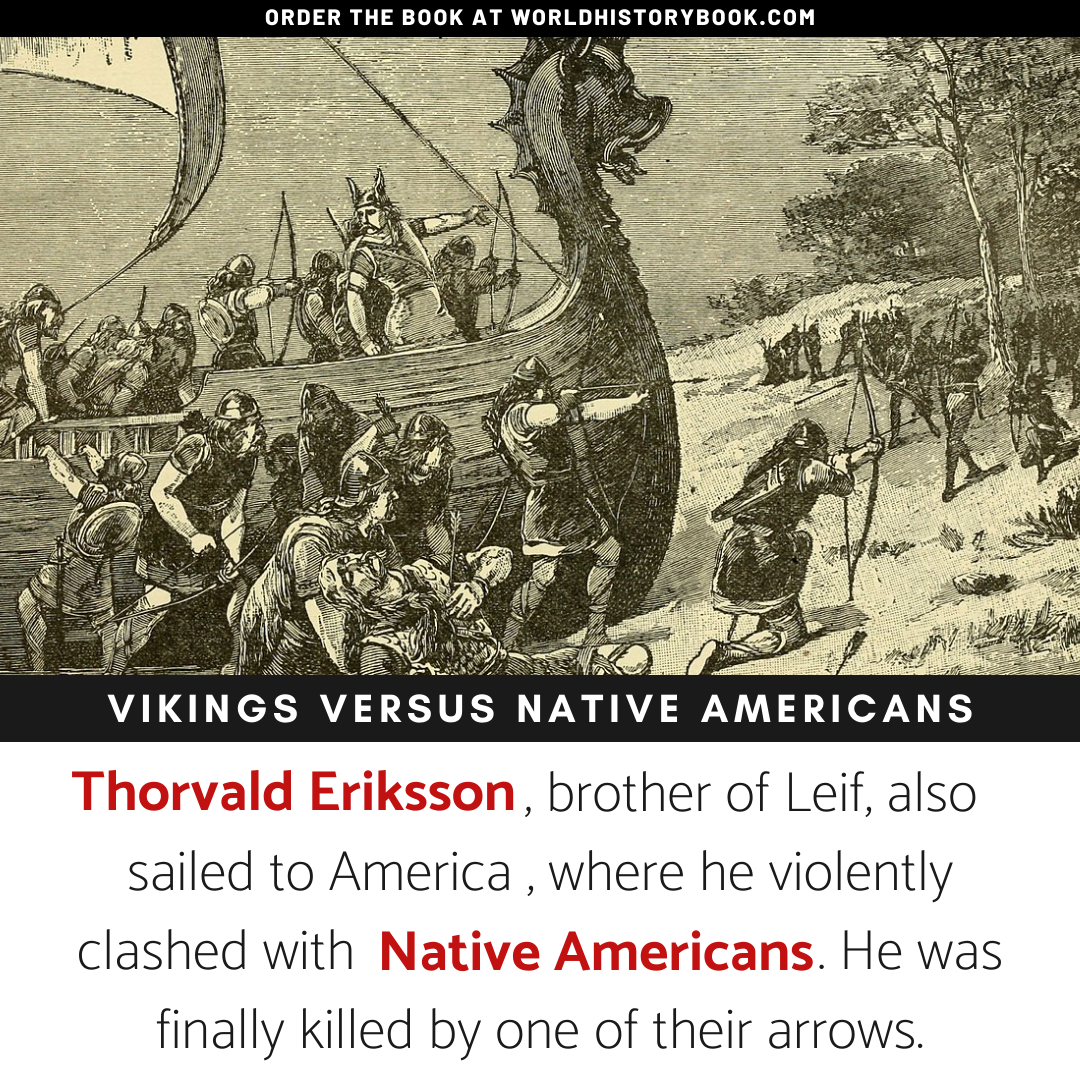 In the 1960s, a Viking settlement was found in Newfoundland, Canada. The buildings are similar to those found in Iceland and Greenland. This gave definitive proof that the Vikings had been to America. 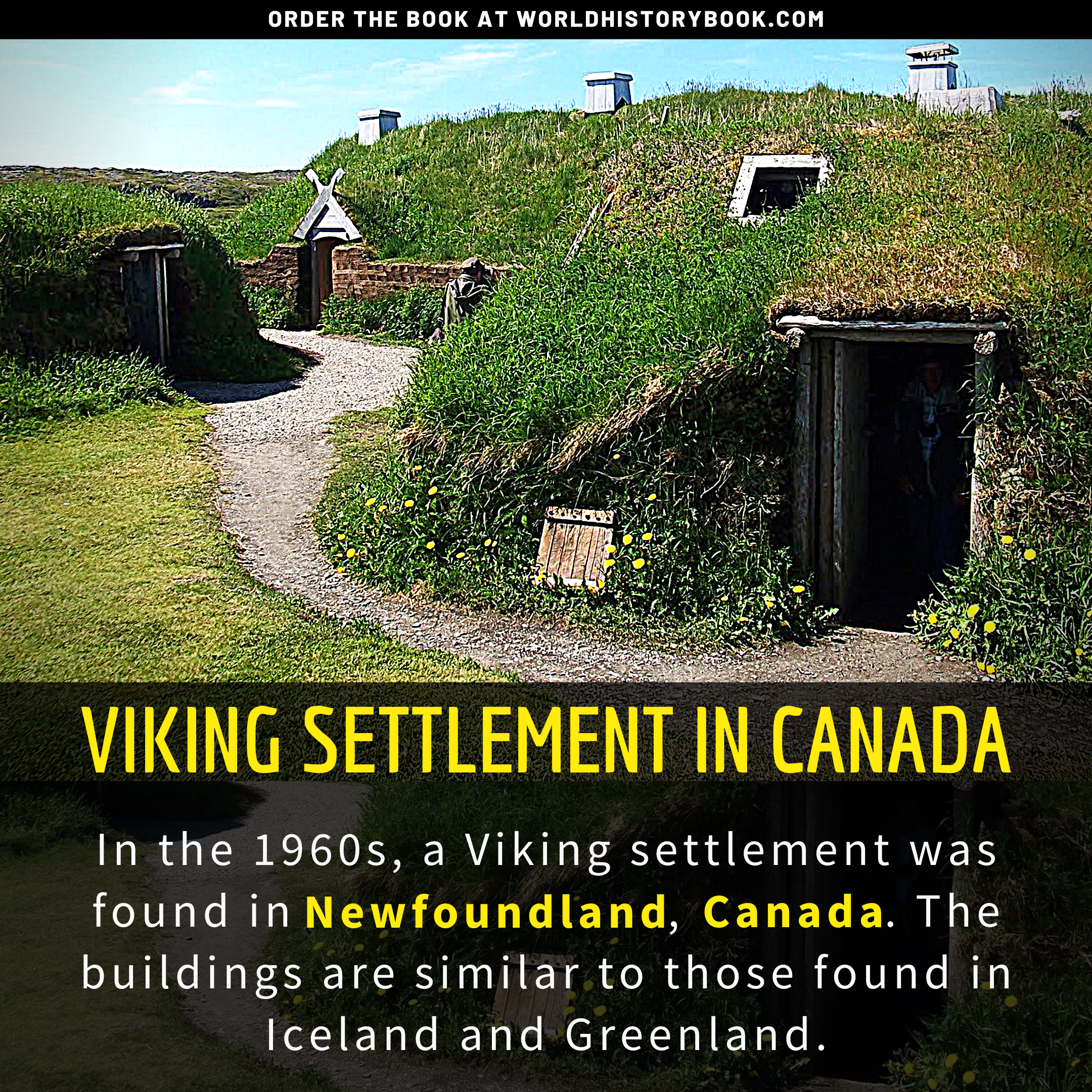