The Republic of Florence

With this post I will start with an analysis of the Renaissance, which started in Florence, Italy.

Based on the Roman model, Florence adopted a democratic form of government. The great humanist and historian Leonardo Bruni is quoted here celebrating the system:

What city, therefore, can be more excellent, more noble? What descended from more glorious antecedents? Which one of the most powerful cities is able to be compared with our own on these grounds? Our form of governing the state aims at achieving liberty and equality for each and every citizen. Because it is equal in all respects, it is called a popular government. We tremble before no lord nor are we dominated by the power of a few. All enjoy the same liberty, governed only by law and free from fear of individuals. 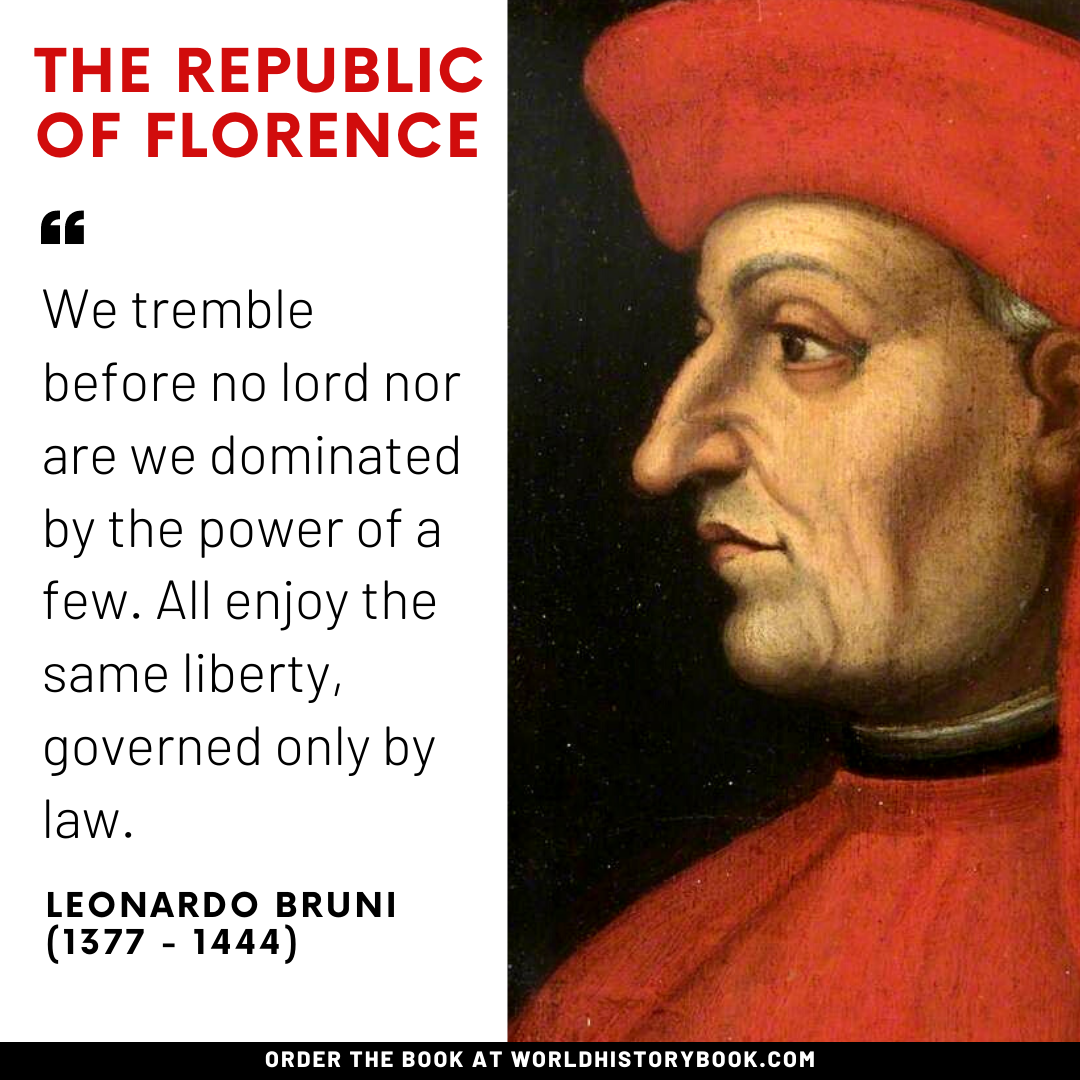 600 years ago can suddenly become scarily relevant with the current pandemic. Luckily, the current virus seems to have only about 0.6% mortality rate conpared to 30% for the bubonic plague of the 14th century. Nevertheless, stay safe everyone. 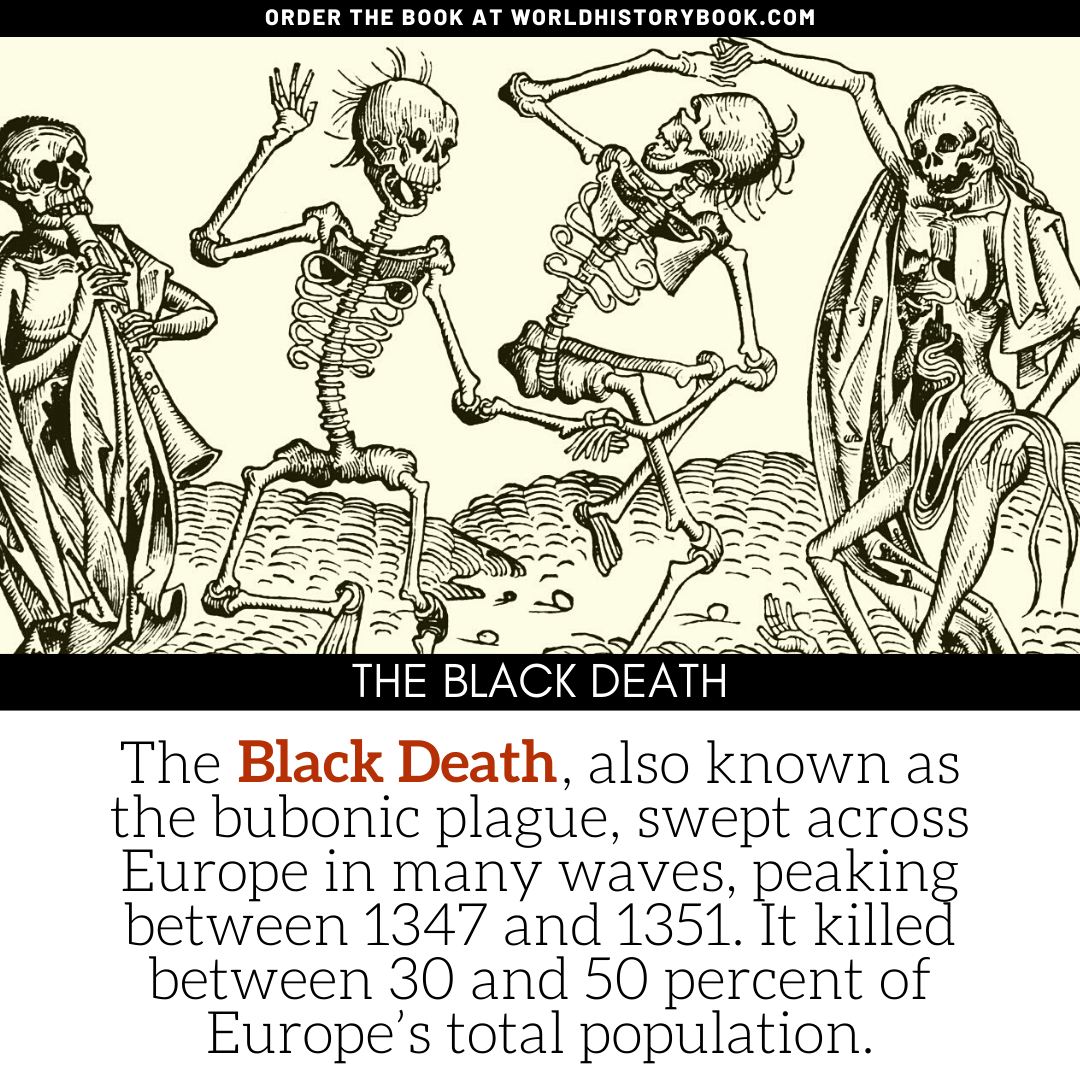 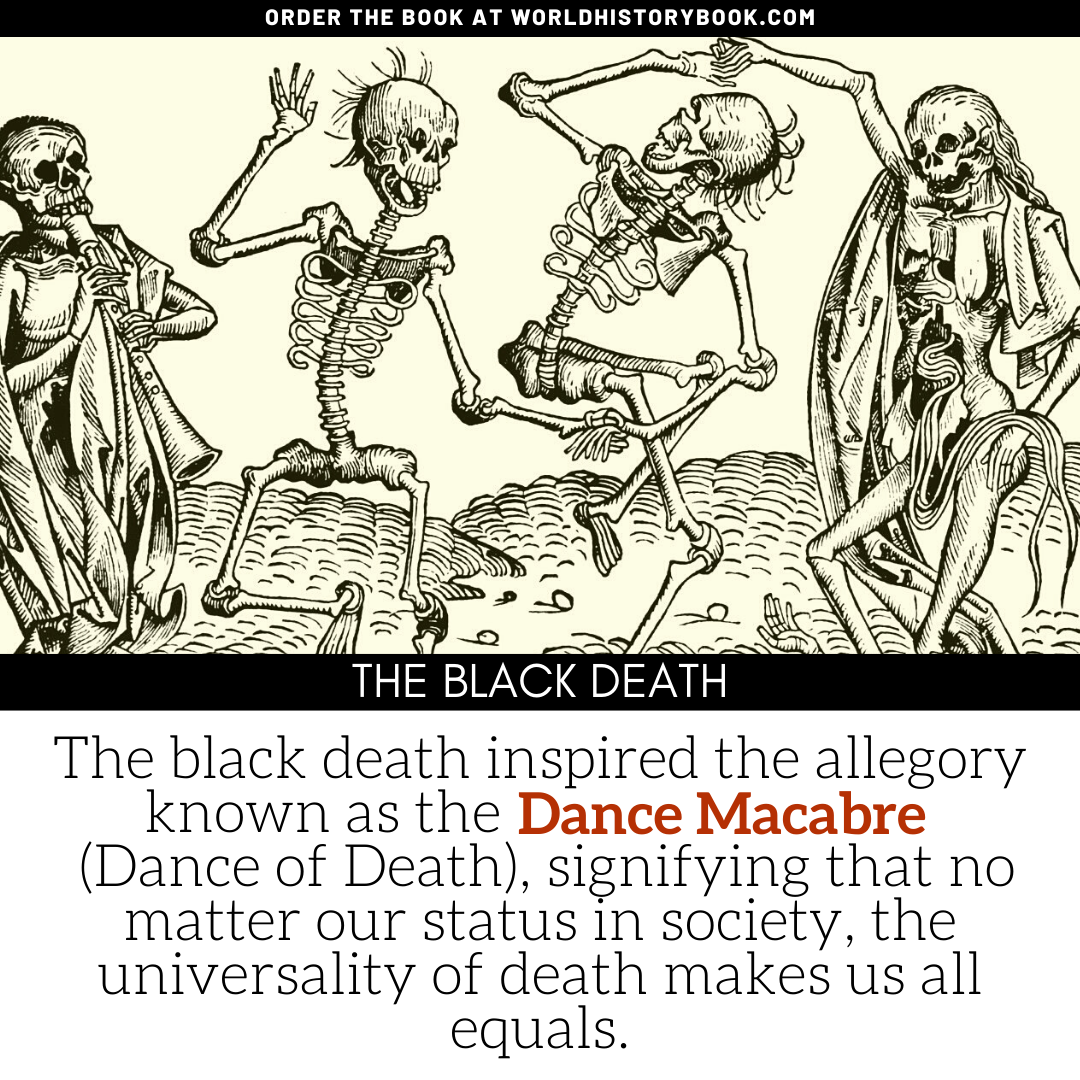 In this post I will share an account of the plague by the 14th century historian Agnolo di Turo (luckily the current pandemic is much less lethal—yet, stay safe everyone!):

"The mortality in Siena began in May. It was a cruel and horrible thing. It is impossible for the human tongue to recount the awful truth. Indeed, one who did not see such horribleness can be called blessed. The victims died almost immediately. They would swell beneath the armpits and in the groin, and fall over while talking. Father abandoned child, wife husband, one brother another; for this illness seemed to strike through breath and sight. And so they died. None could be found to bury the dead for money or friendship. Members of a household brought their dead to a ditch as best they could, without priest, without divine offices. In many places in Siena great pits were dug and piled deep with the multitude of dead. And they died by the hundreds, both day and night, and all were thrown in those ditches and covered with earth. And as soon as those ditches were filled, more were dug. I, Agnolo di Tura, buried my five children with my own hands. And so many died that all believed it was the end of the world."

The image depicts a plague doctor, who wore these costumes from the 17th century onward. They wore a beak-like mask which was filled with aromatic items, which were supposed to protect them from the disease. 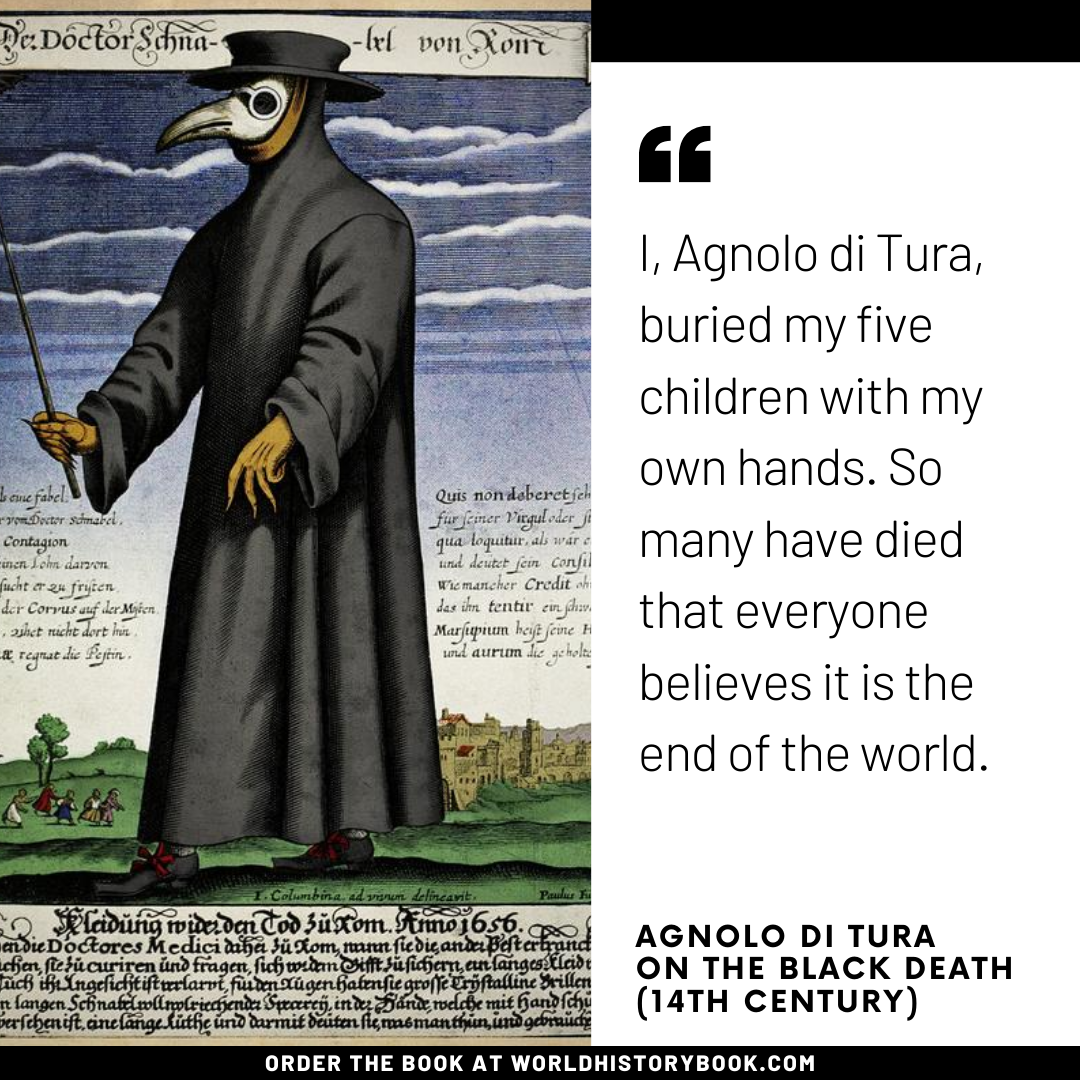 Petrarch on the Black Death

A quote by Petrarch on the Black Death. You will learn more about Petrarch soon, as he rightfully considered to be the founder of humanism, the great intellectual movement behind the Renaissance. 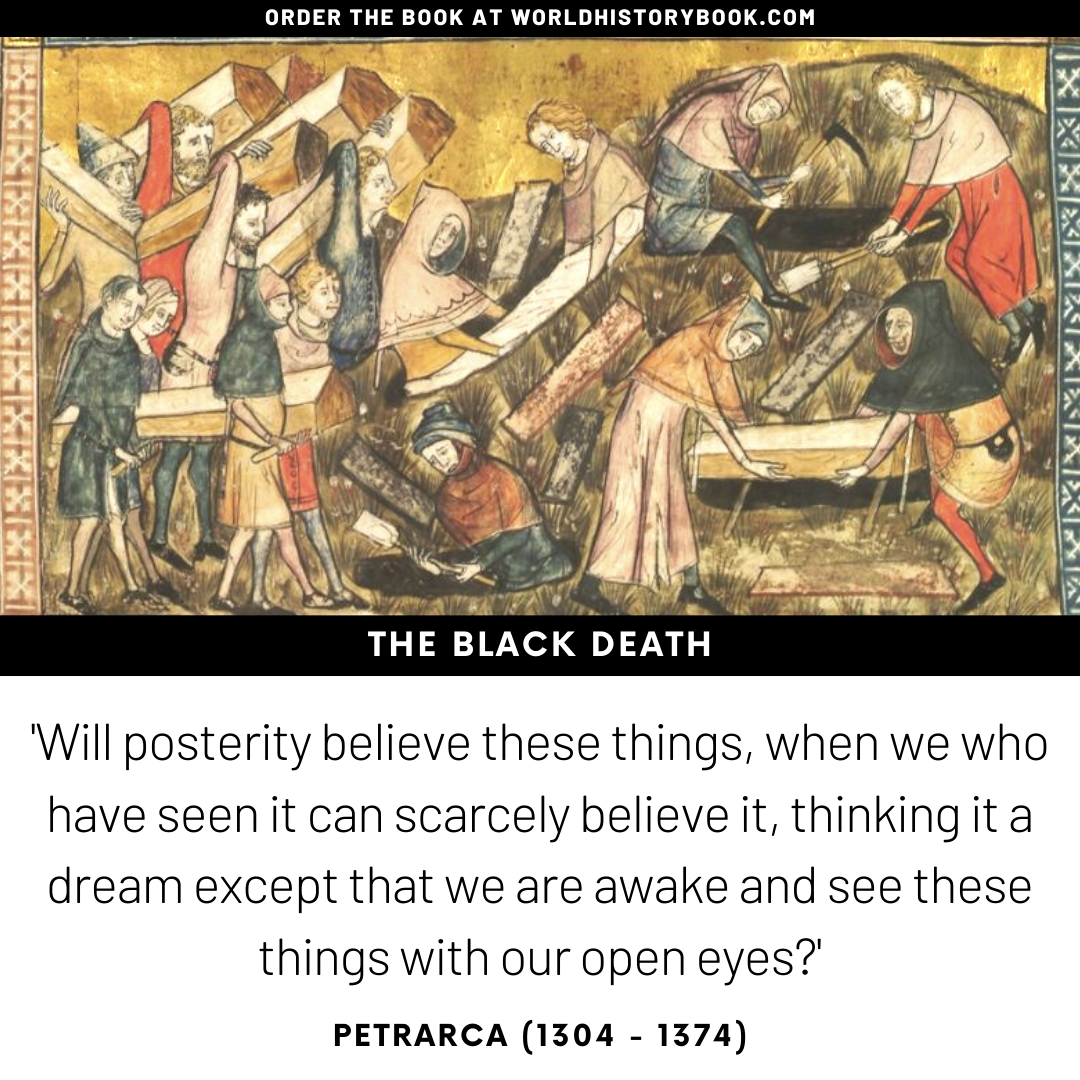 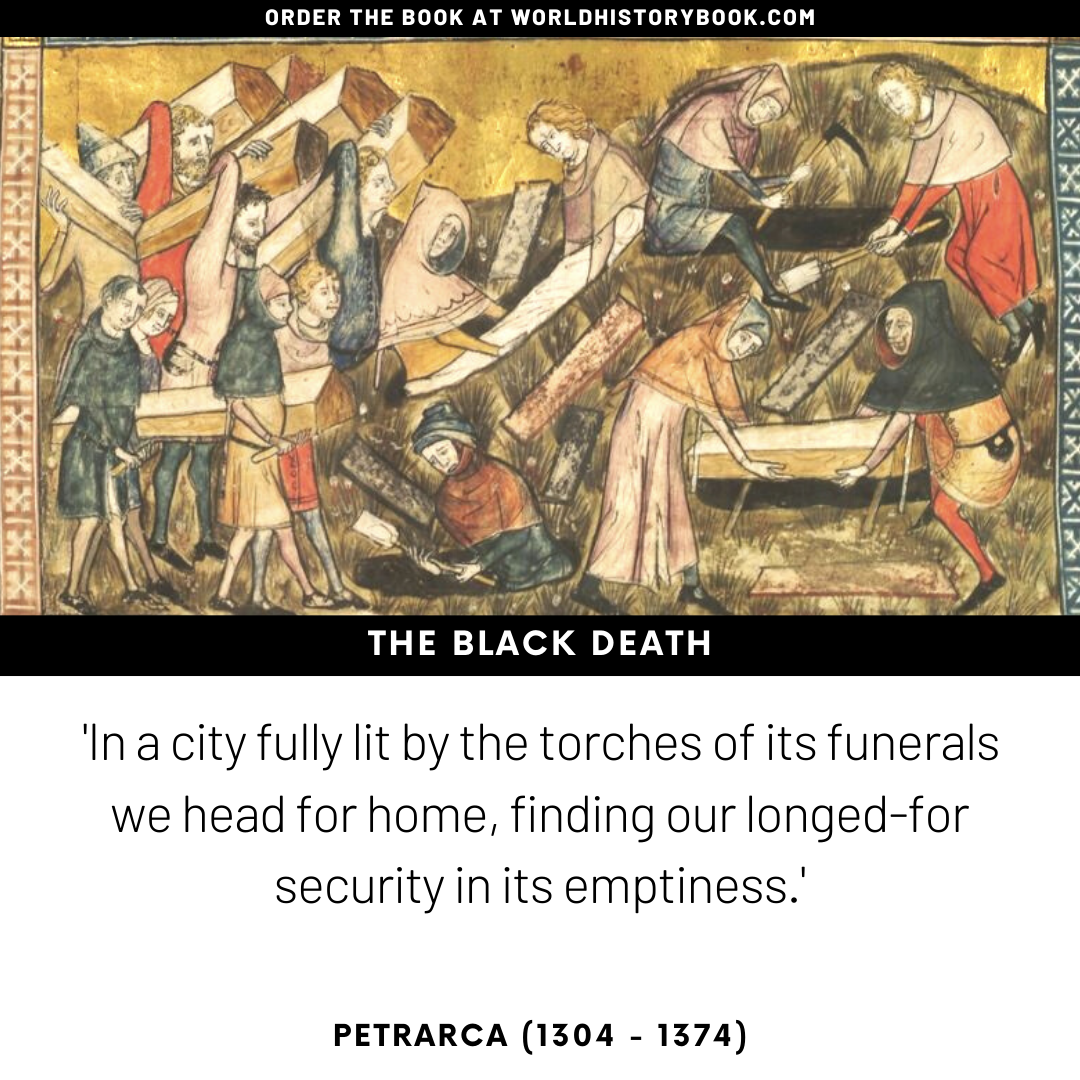 The Rise of the Merchant Class

The rise of the consumer economy in 14th century Italy created enormous wealth that increased the standard of living. This was especially true in Florence, where the Medici family became the richest bankers of Europe and leaders in Florentine politics. They used much of their wealth to support education and the arts. 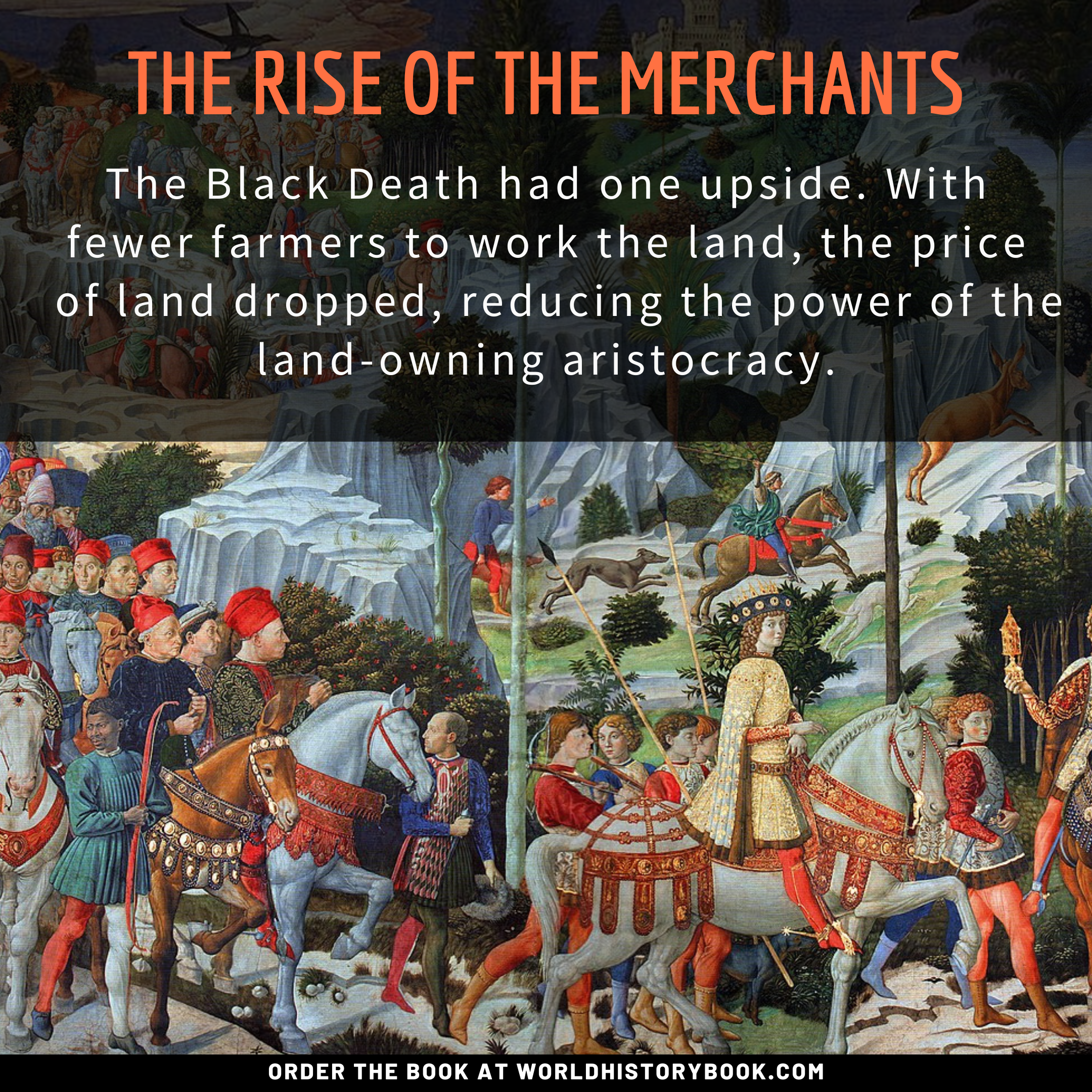 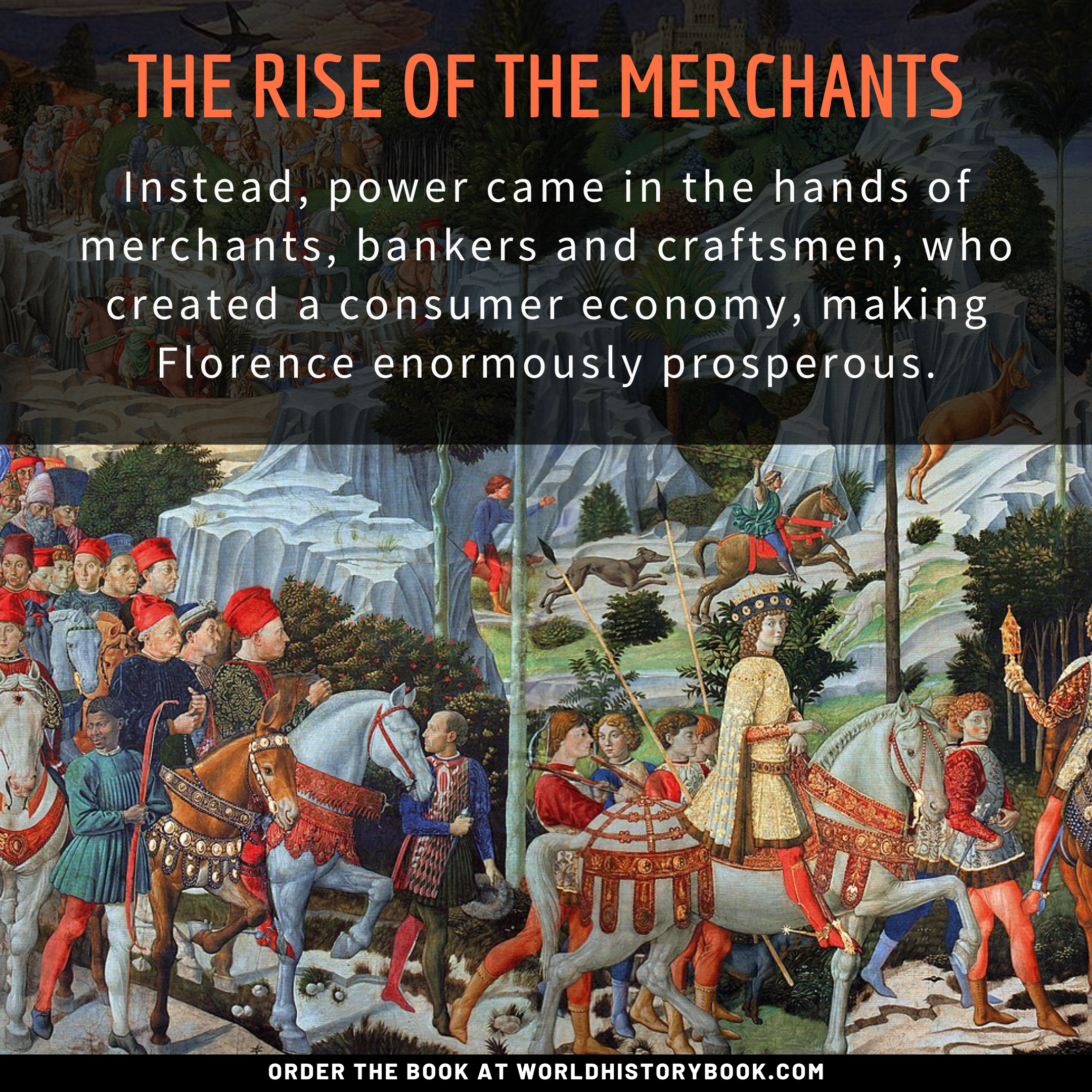 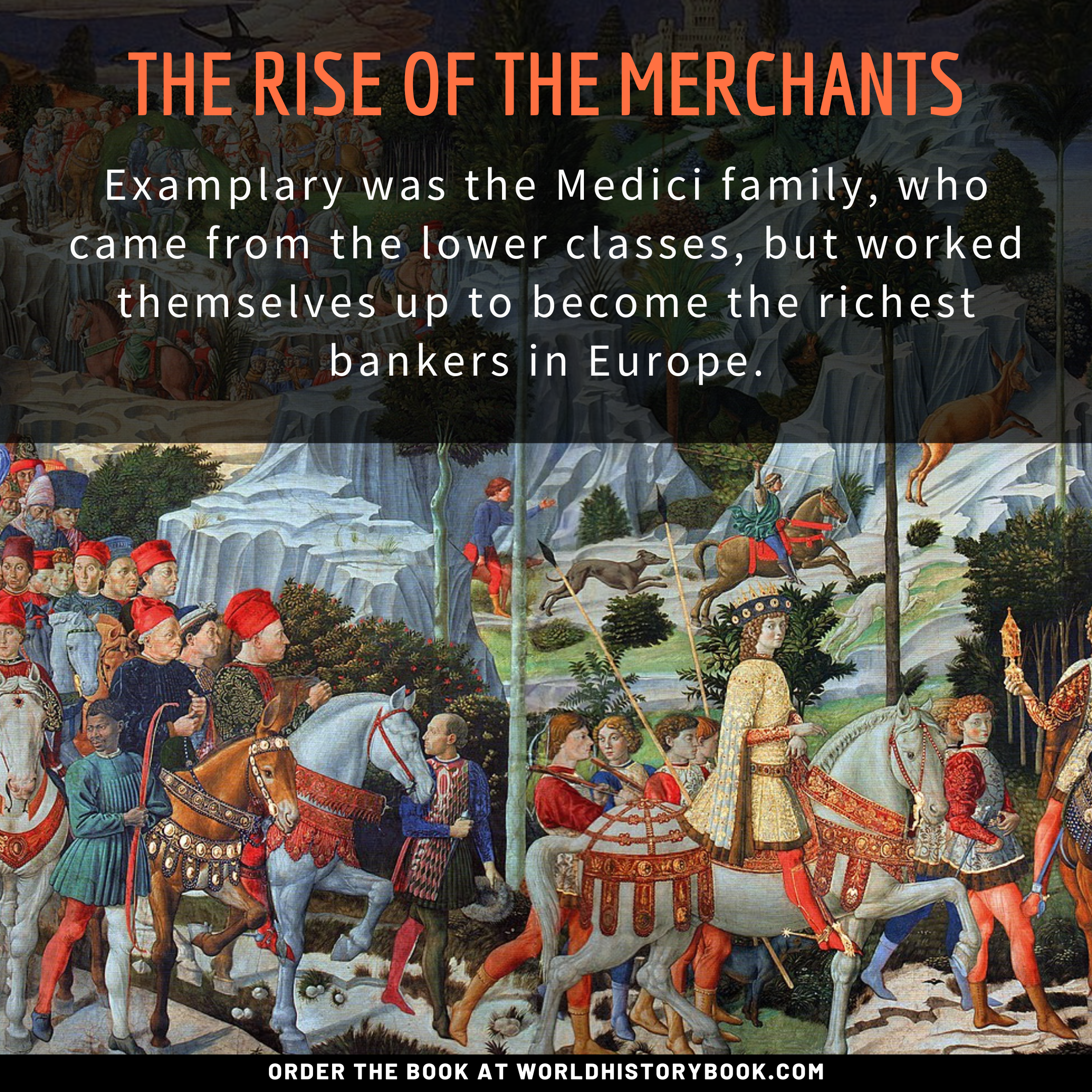 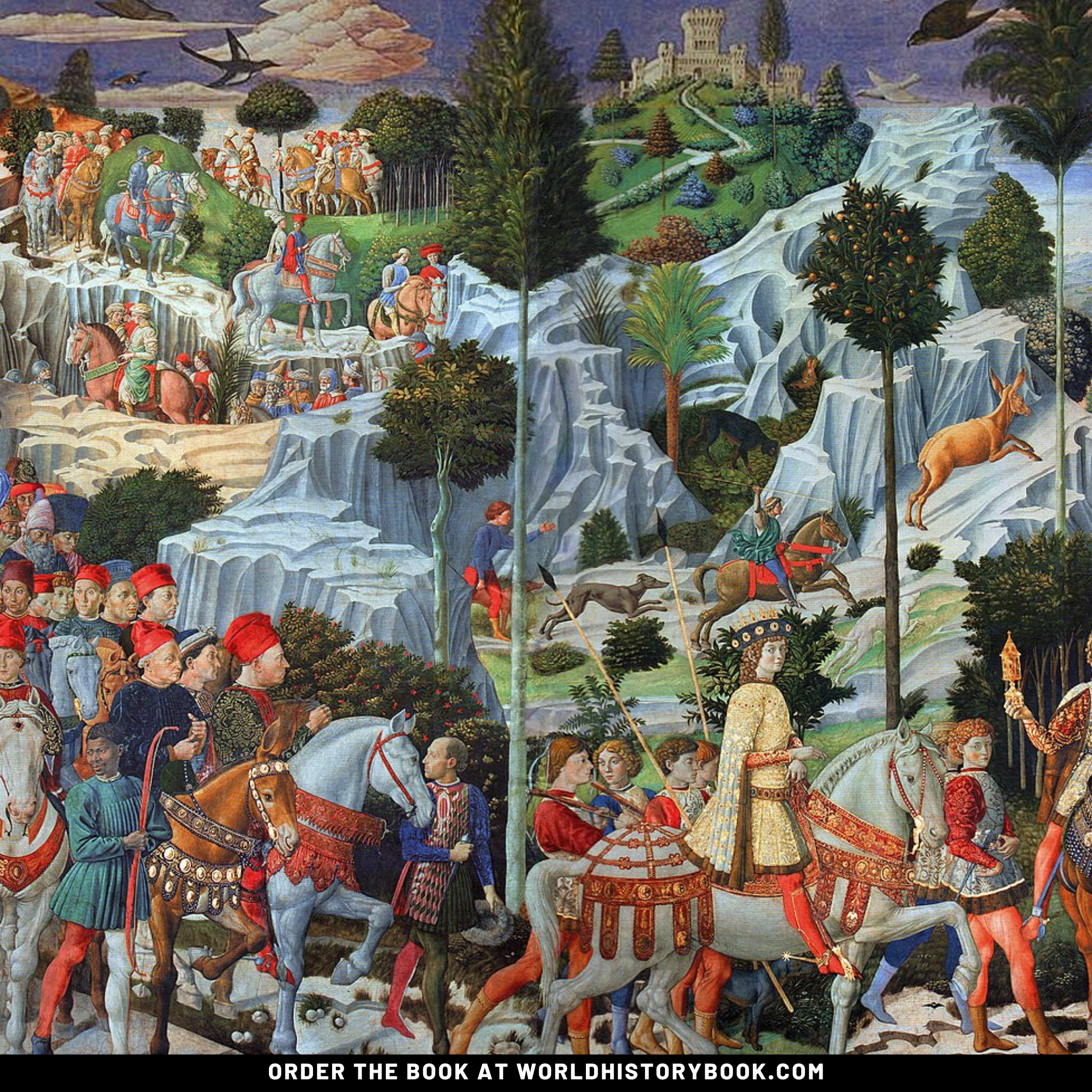 The Siege of Florence

While Renaissance intellectuals where already rediscovering the work of Roman authors, the politicians of Florence only caught up when they were on the brink of total destruction in a war against Milan (the painting depicted as actually another war against Milan a century or so later)

Shocked by the defeat, they came to believe that ancient Roman ideas about how to run a state effectively were superior to their own politics, which created a culture in which education became highly valued among rulers. This movement is today called civic humanism. 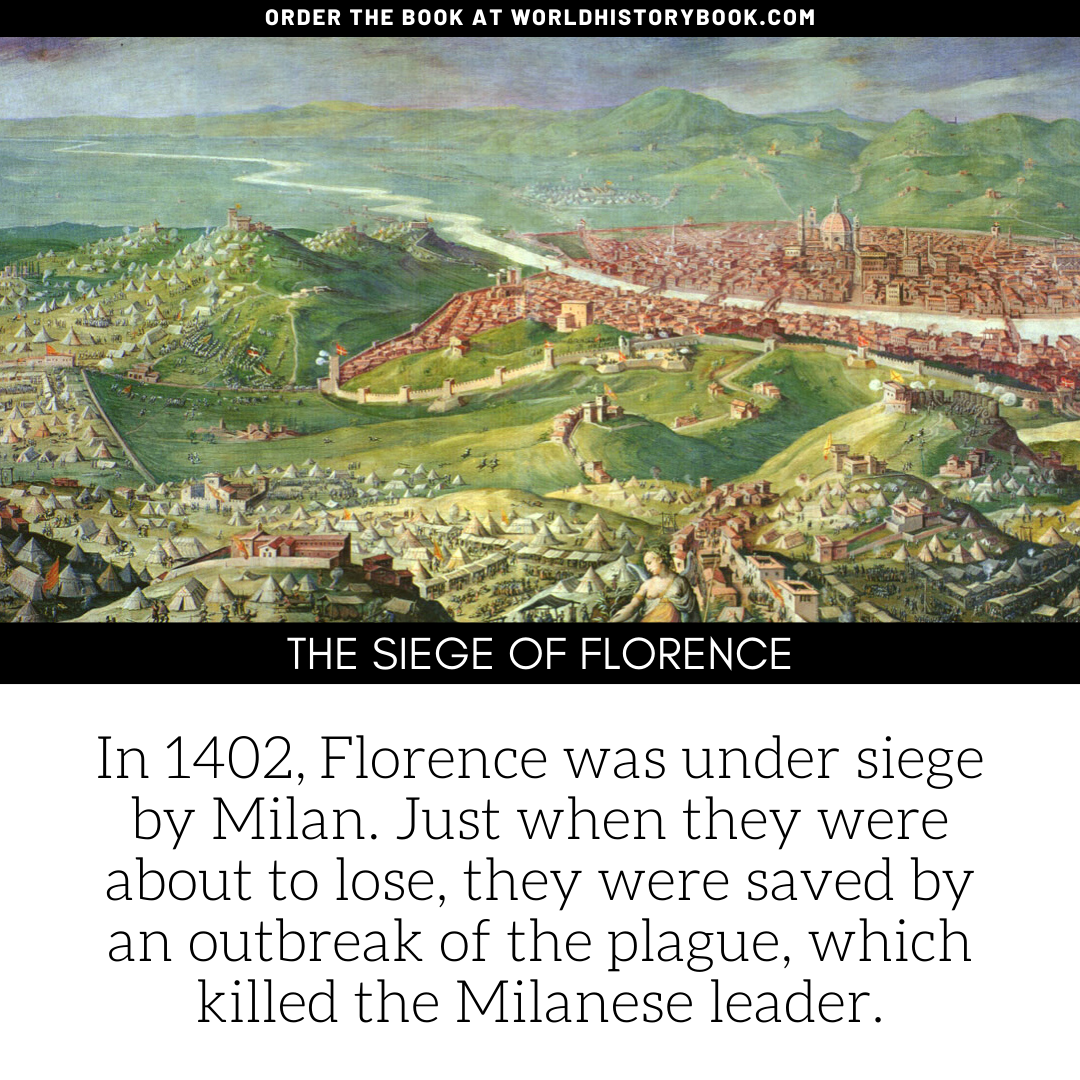 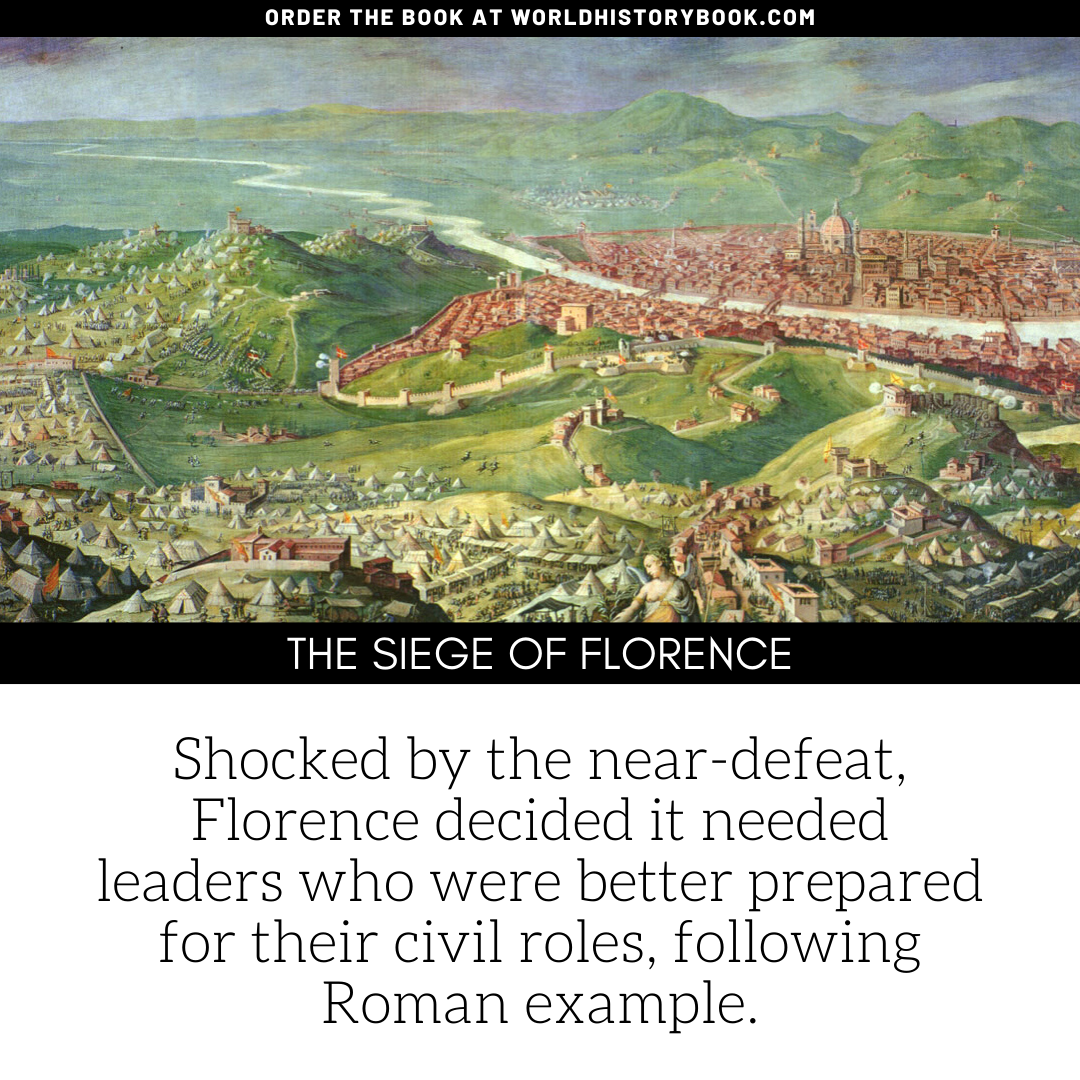 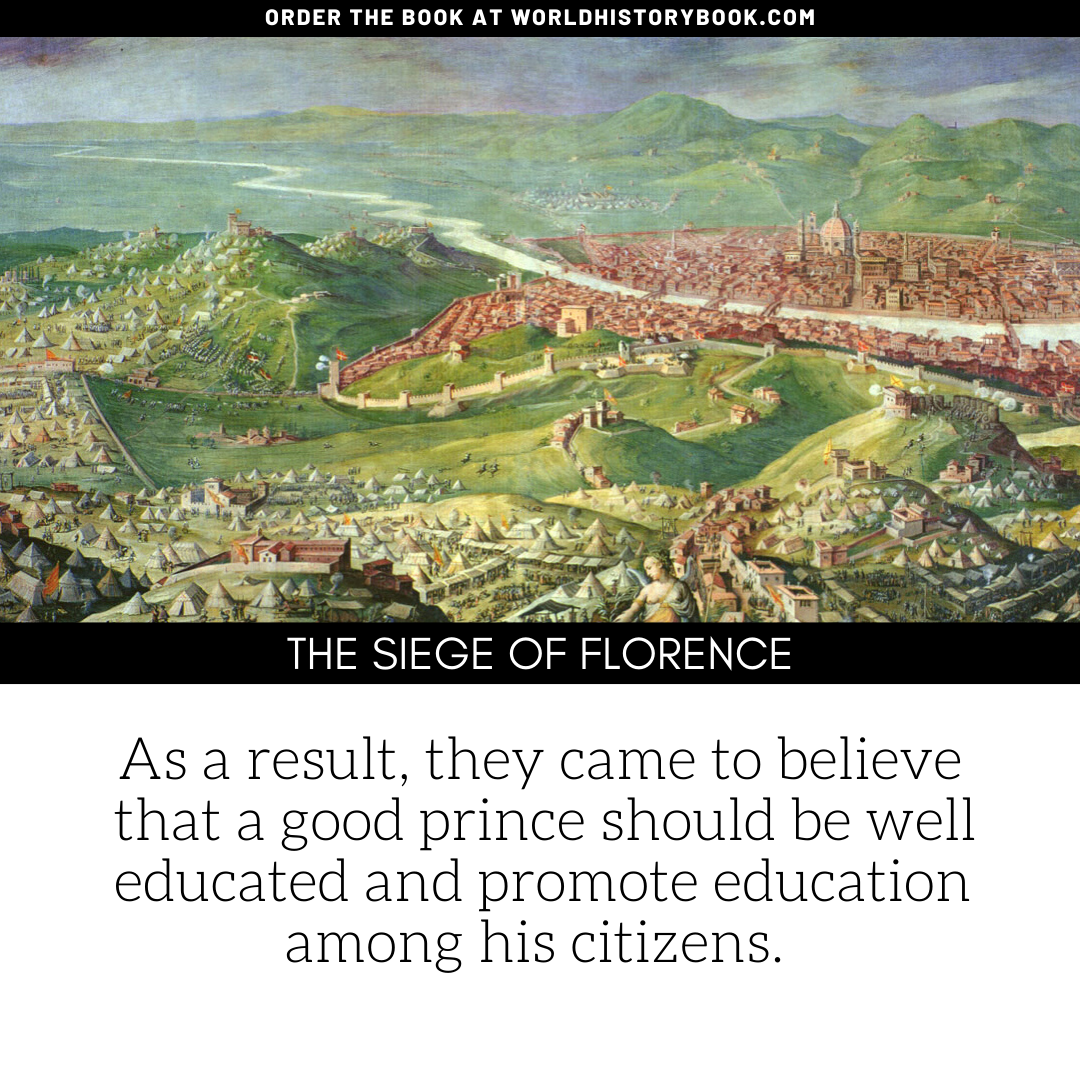 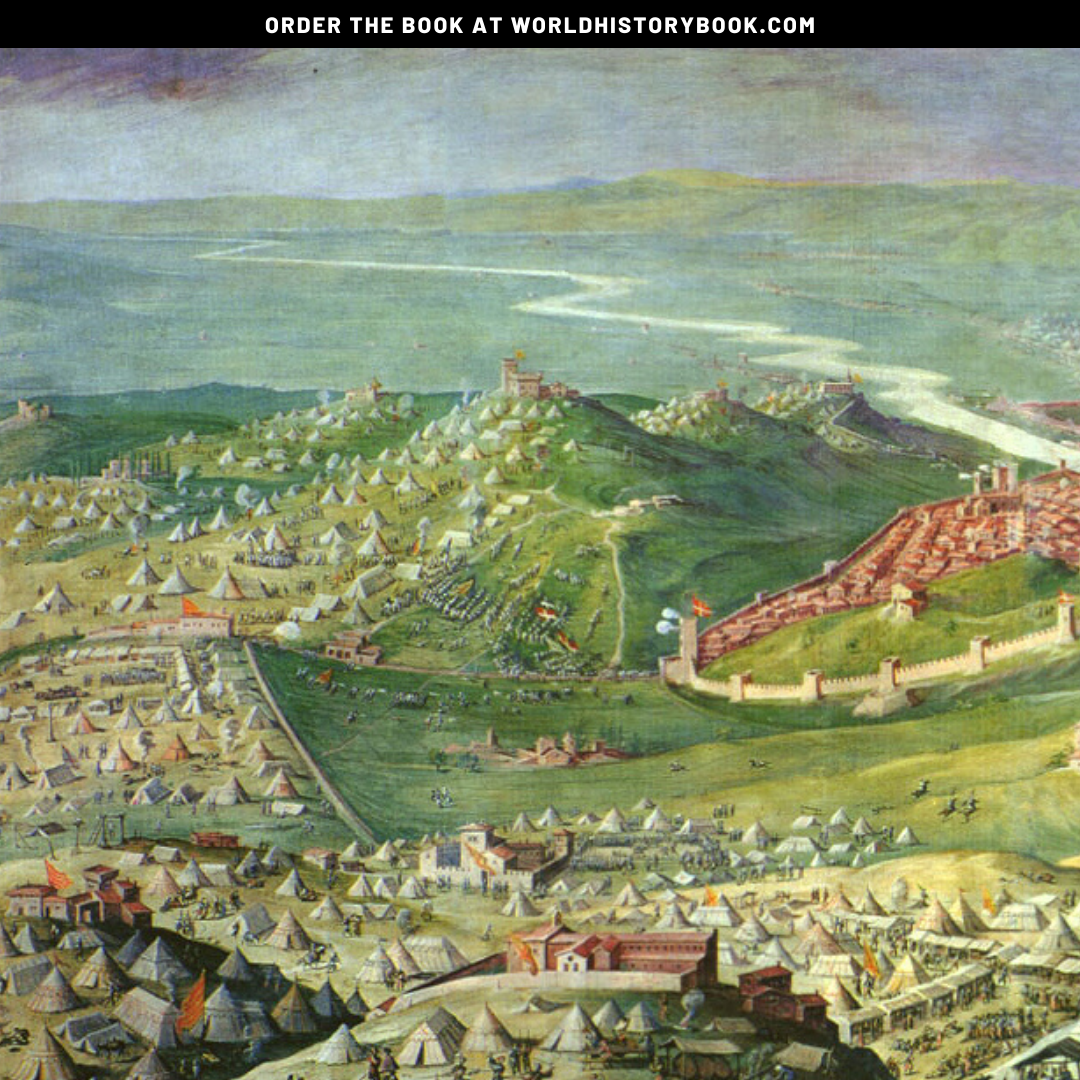 De Medici banking family grew in political power and became the de facto rulers of Florence in the 15th century, ending the democratic elements of the government.

Yet the family also did much good for the city. They were great patrons to the arts, hiring the legendary painters Botticelli and Michelangelo. They also spend a mindboggling amount of money on books and charity. 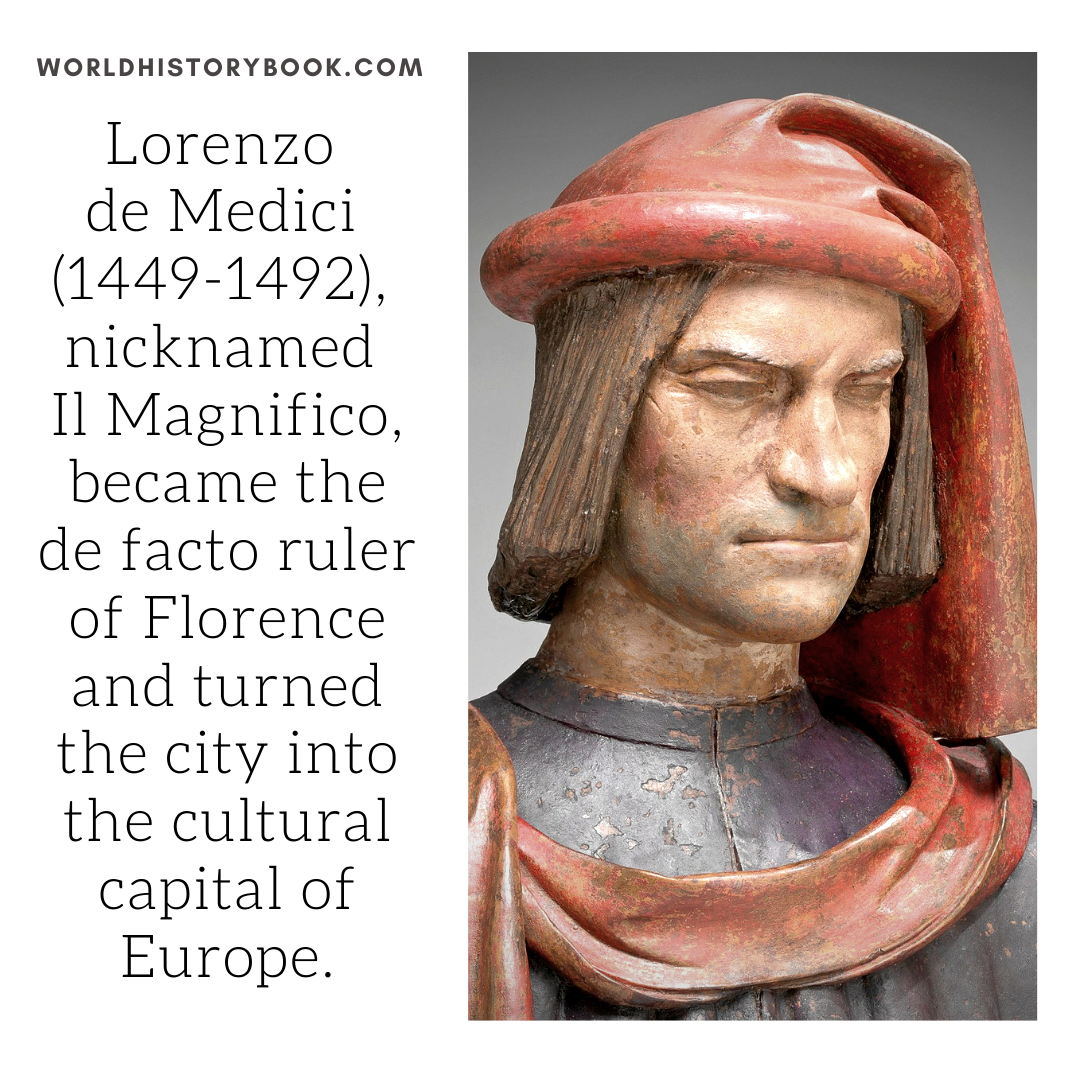 Searching libraries doesn't sound very revolutionary, but finding Cicero's letter, he initiated the Renaissance and helped pull Europe out if the Middle Ages.

Searching old monastic libraries, Francesco Petrarca (1304-1374) found personal letters from the Roman philosopher and statesman Cicero. Reading his beautiful Latin, he discovered the Latin language has degraded over time. Shocked by this, he termed the period after the fall of Rome the Dark Ages. Leonardo Bruni (1370-1444) was confident enough to claim they had entered a new era of rebirth, or Renaissance. 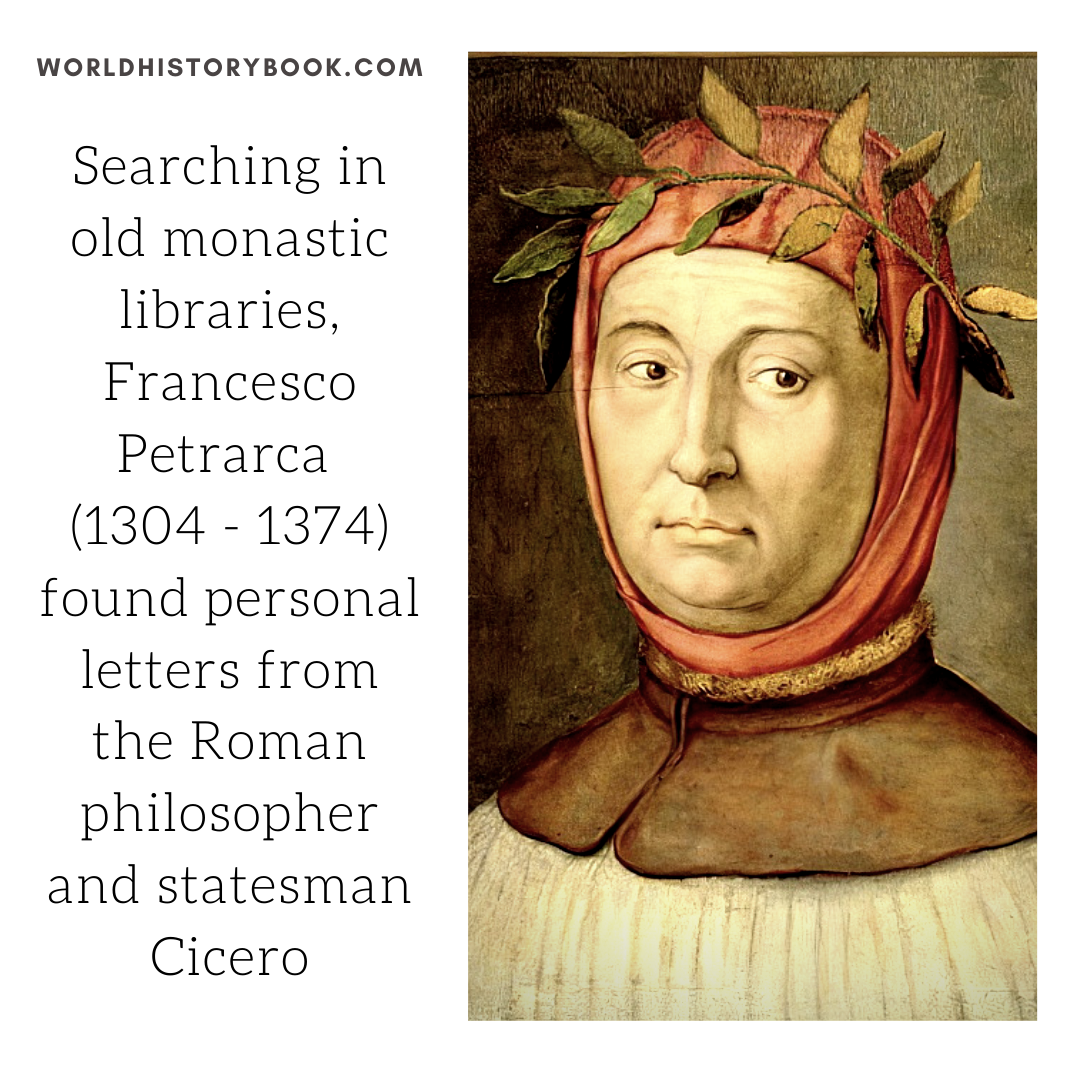 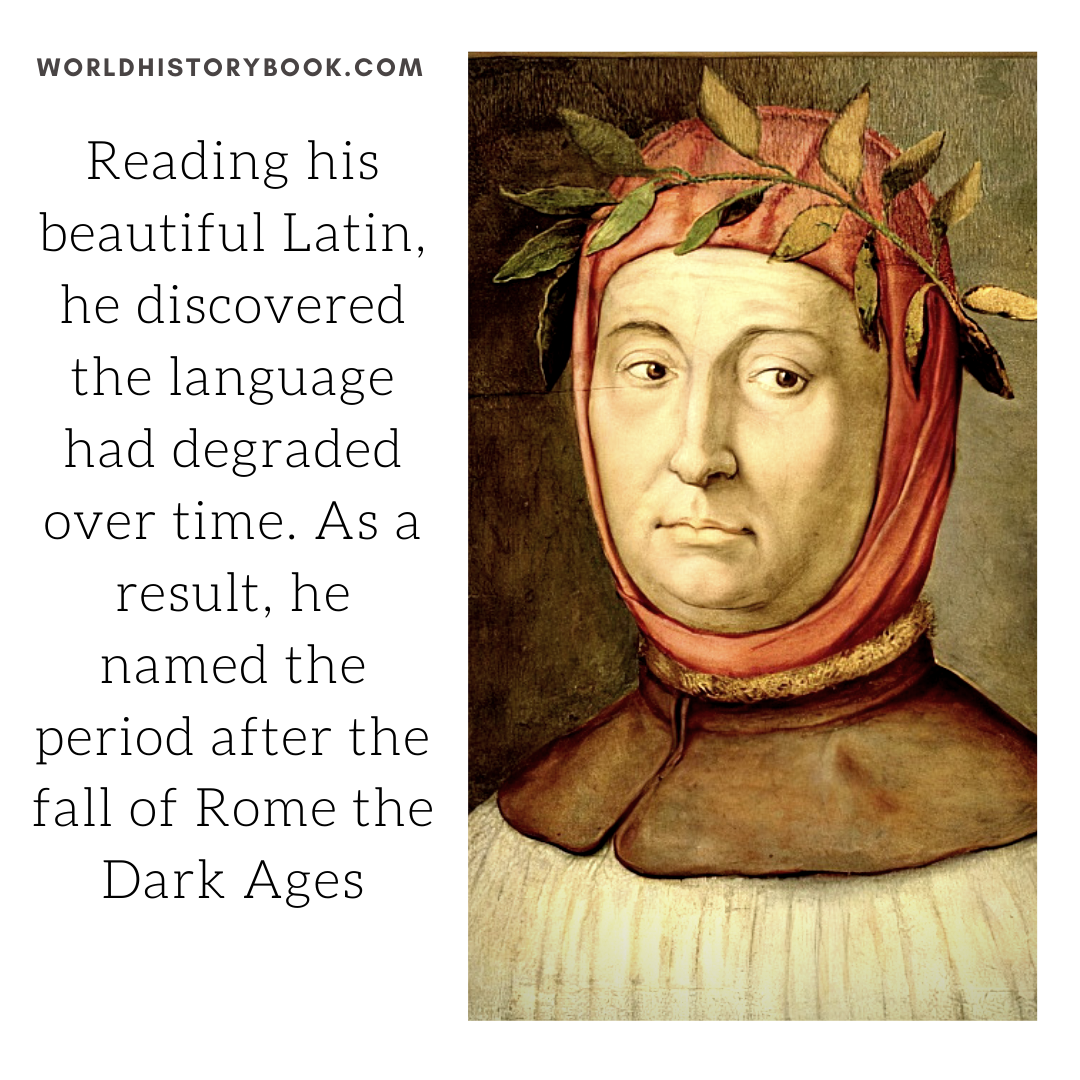 The Renaissance saw the start of a redefinition of education, called the 'studia humanitatis' (the humanities). This was a broad education, which included instruction in grammar, rhetoric, history, moral philosophy and poetry. The goal was to create well-rounded individuals, better capable of executing their civic duties. 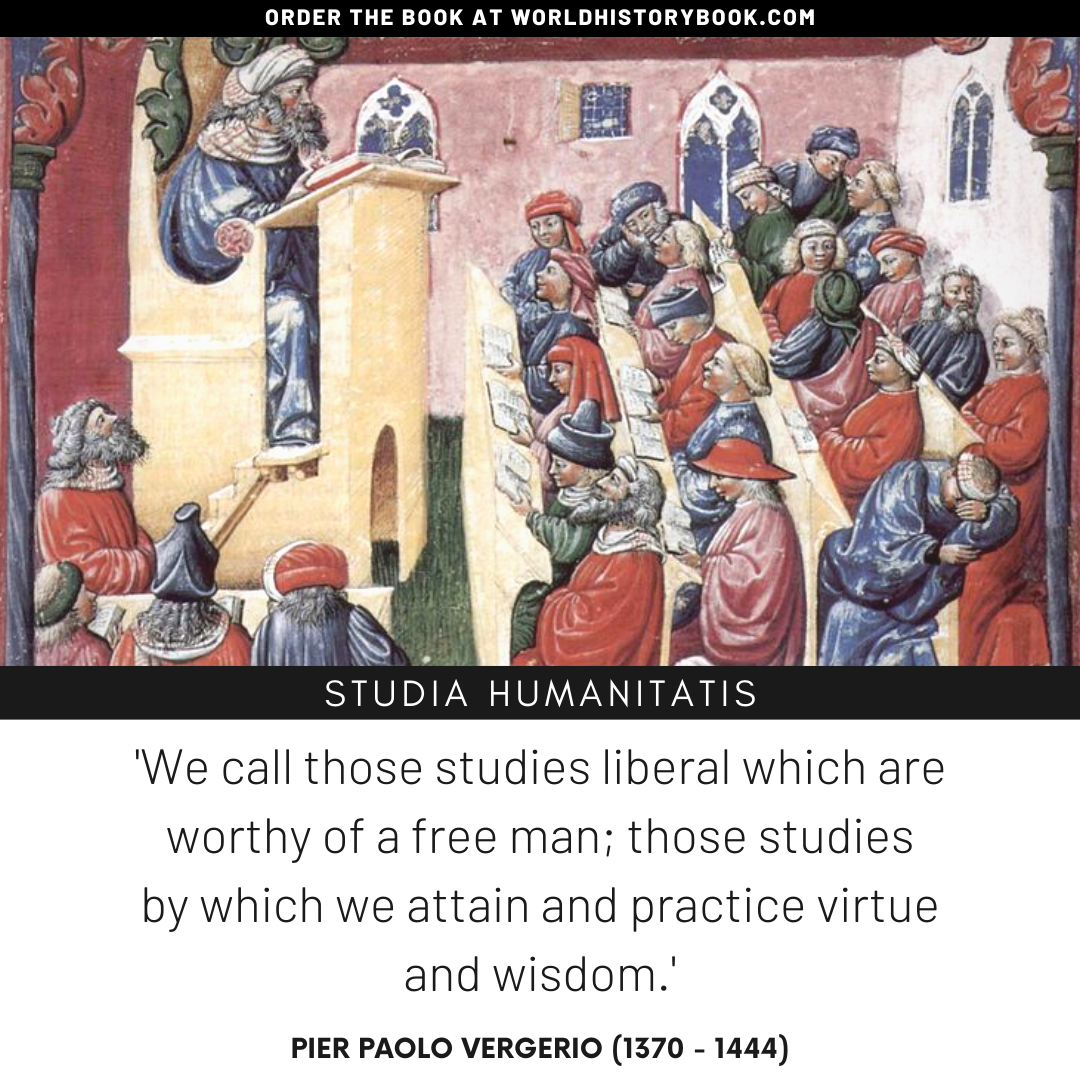 The Renaissance saw the start of a redefinition of education, called the 'studia humanitatis' (the humanities). This was a broad education, which included instruction in grammar, rhetoric, history, moral philosophy and poetry. The goal was to create well-rounded individuals, better capable of executing their civic duties.

Depicted here is the young Cicero during his studies. 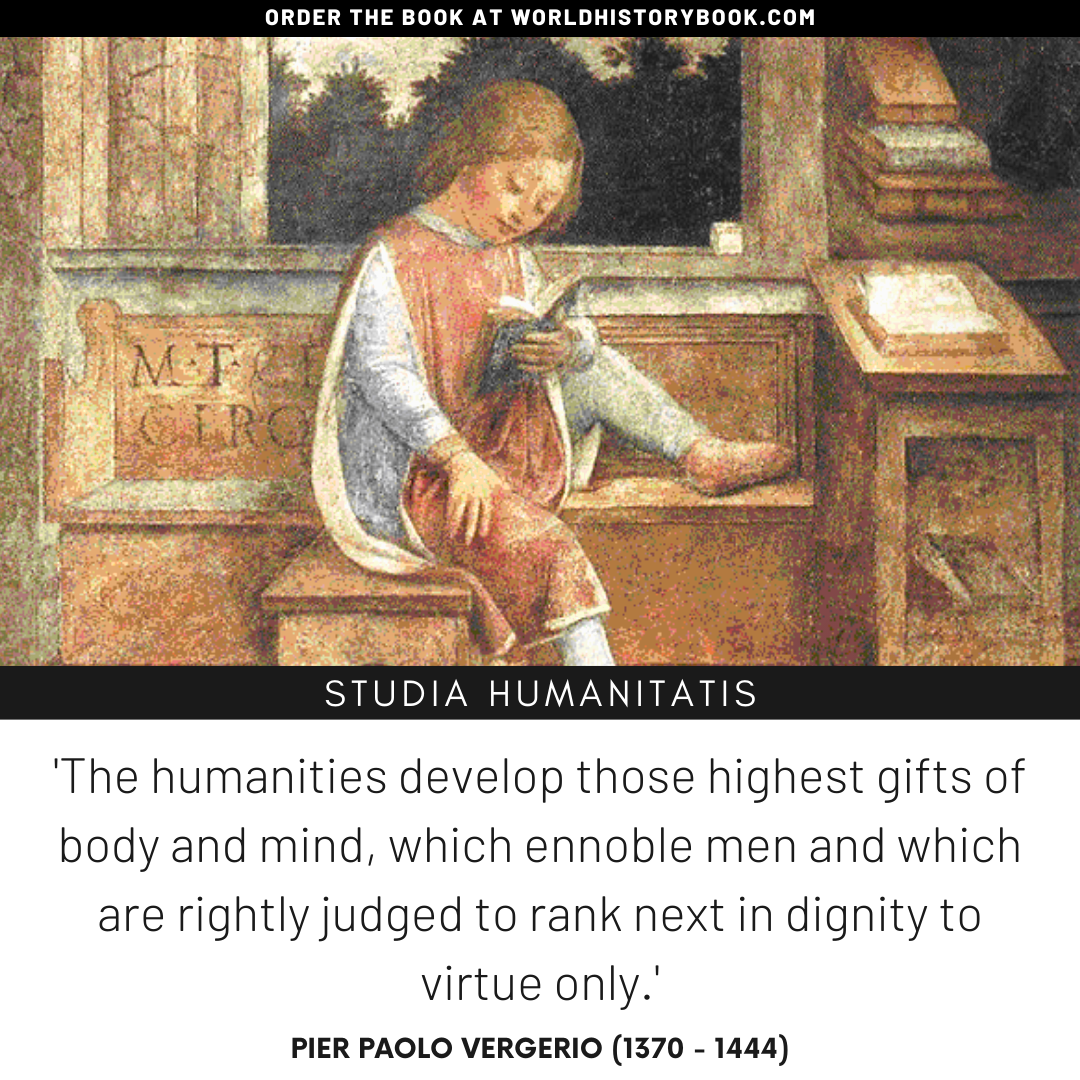 Back to the Sources

AD FONTES means ' back to the sources'. It was a movement in Renaissance Italy to search for the original Greek, Roman and Christian sources, because many works had been lost or altered during the Middle Ages.

The content of these texts allowed Europe to wake up out of the slumber of the Middle Ages. 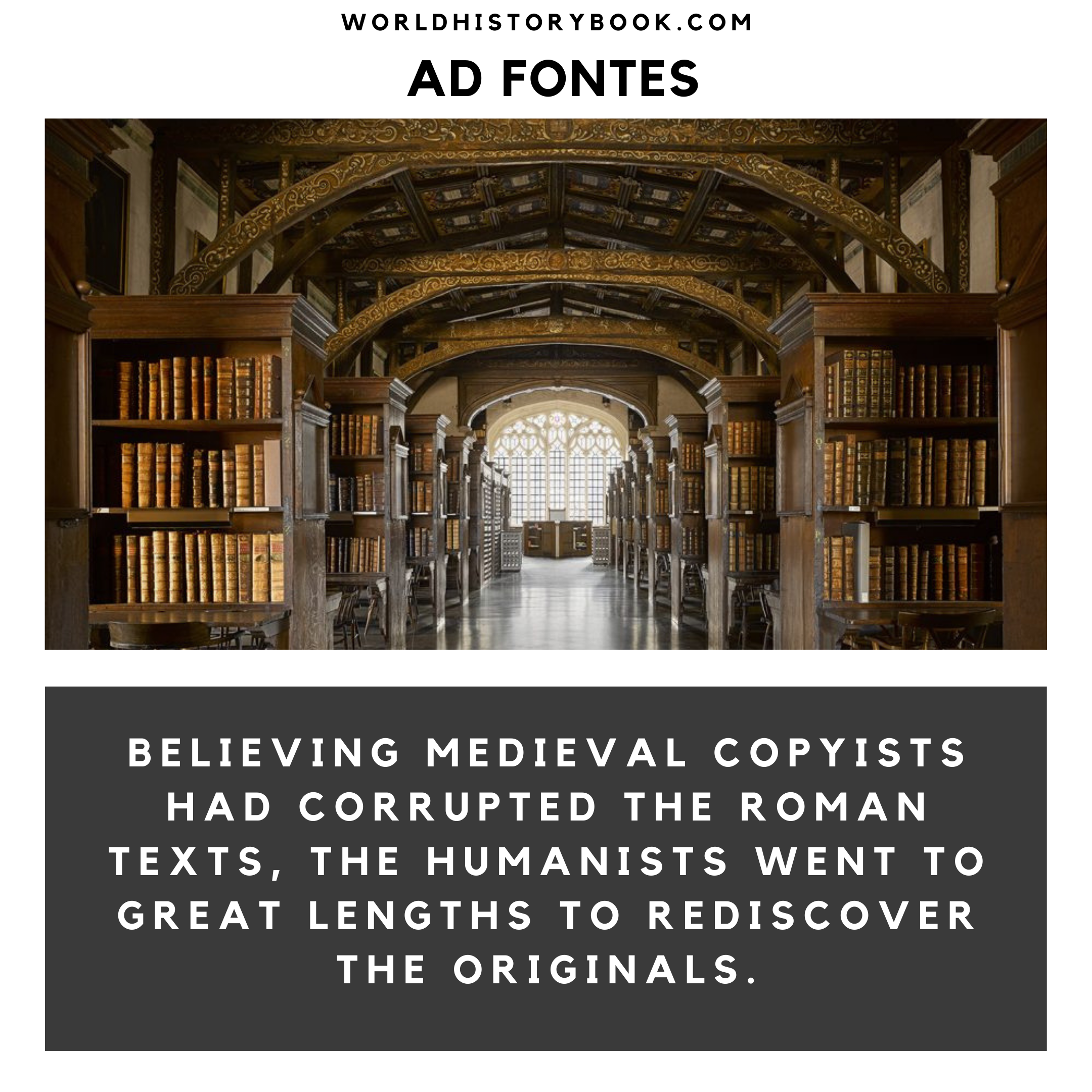 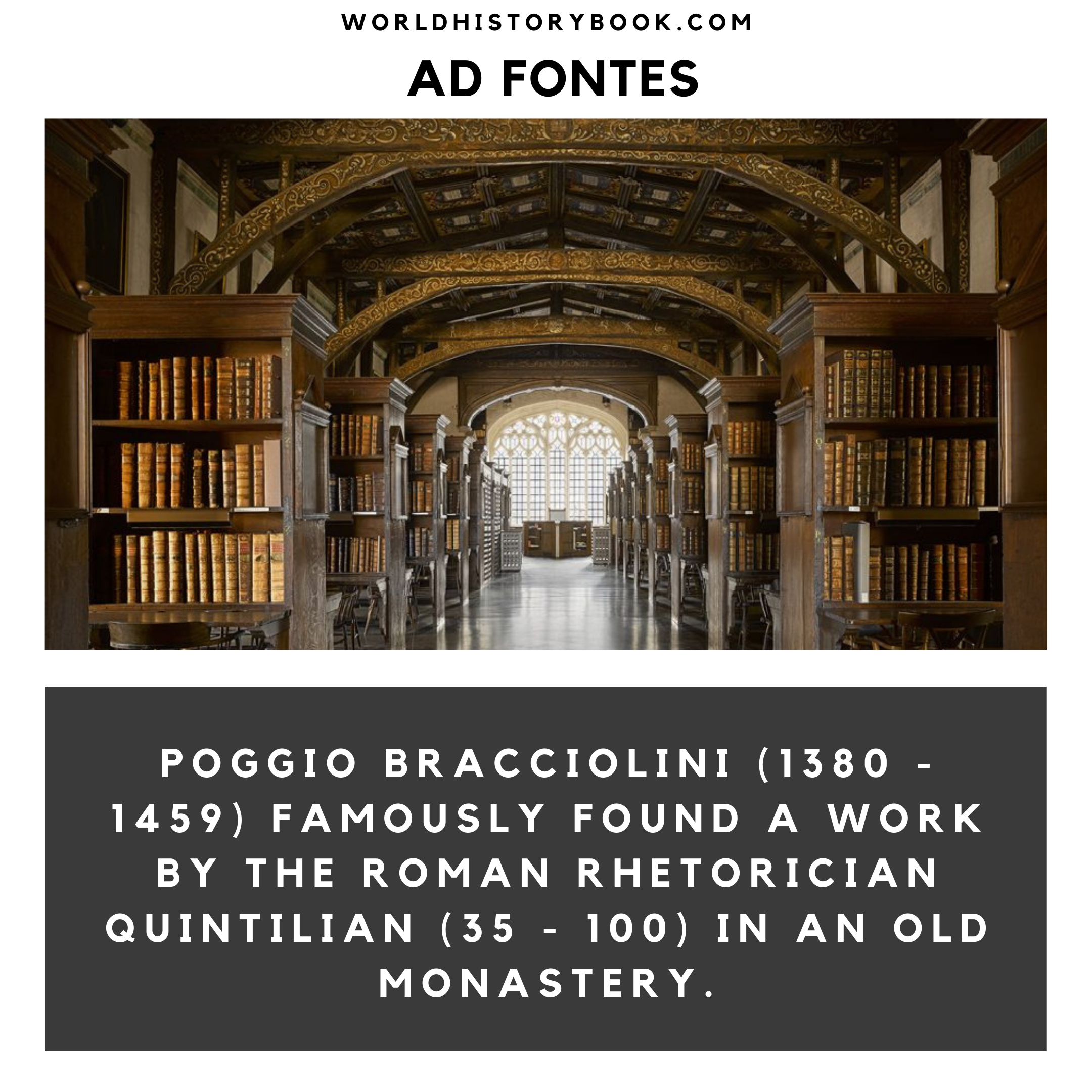 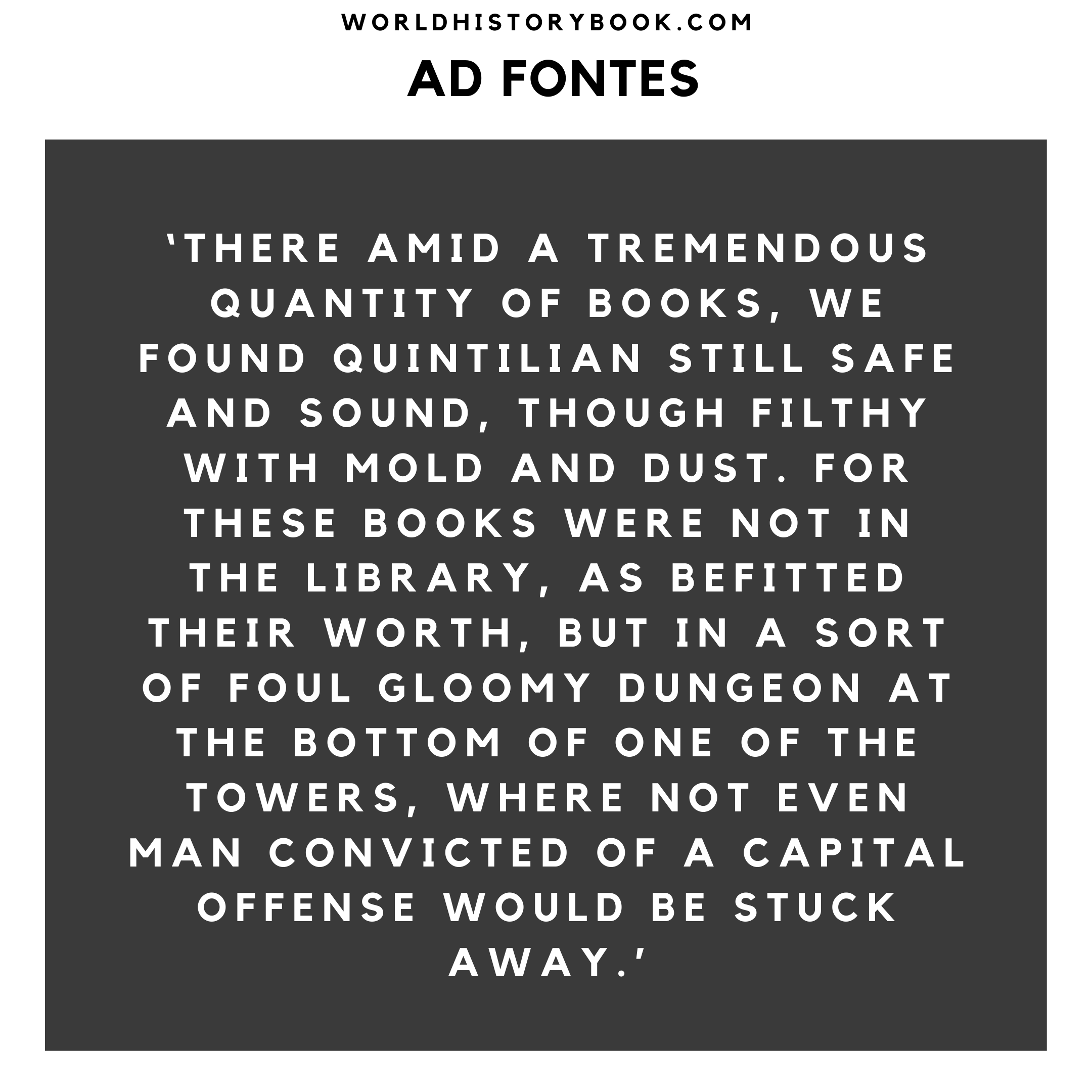 Today, we call the ideal product of a humanist education a Renaissance Man, the most famous example being Leonardo Da Vinci. Baldassare Castiglione (1478-1529) described the Renaissance Man as a polymath versed in both intellectual, practical and cultural matters. He was skilled at philosophy, science, music, art and war. 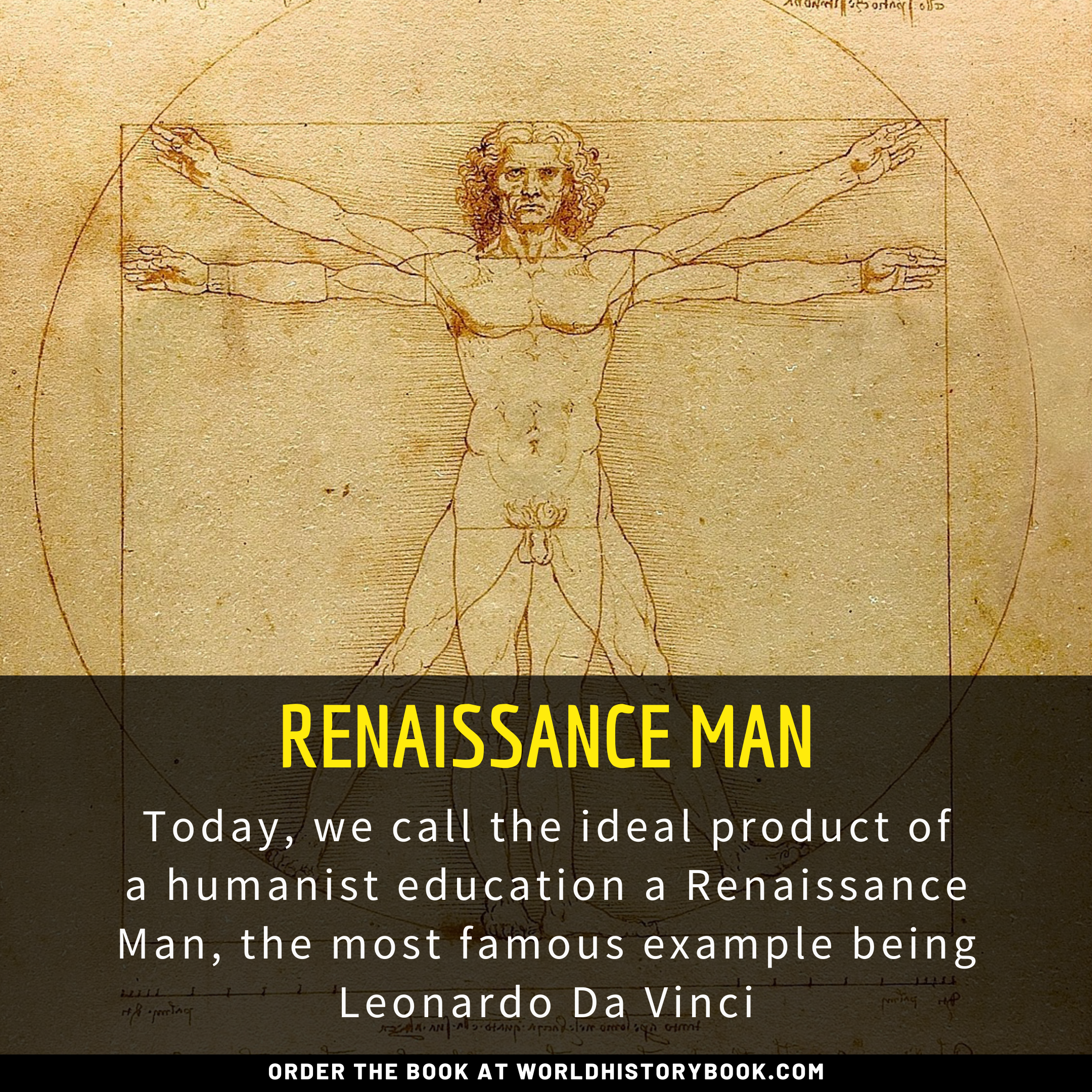