As you probably know from your high school days, the Pythagorean theorem can be used to calculate the lengths of the sides of triangles.

Although the Babylonians never described the theorem, we know they used it, since we have found tables with Pythagorean triples, which are whole numbers which satisfy the equation a2+b2=c2.

For instance in the top row of the depicted clay tablet we read 119 and 169, which are part of the following Pythagorean solution: 1202+1192=1692. Every row contains another triple like this. 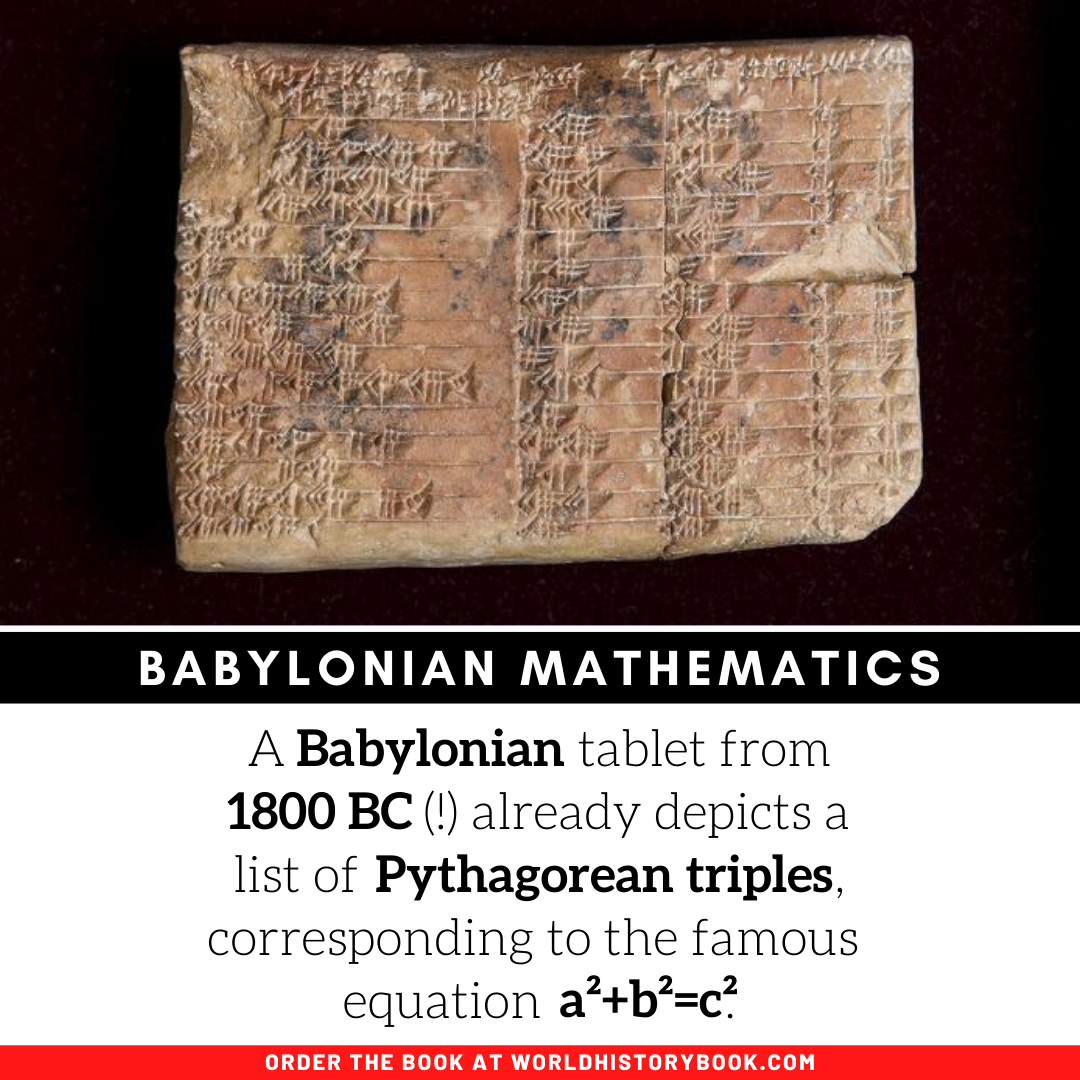 The Pythagorean rule seems to have been used for practical construction problems by the Babylonians and the Egyptians from around 1800 BC (see previous post), yet we find no sources stating the theorem in full.

This changed around 800-600 BC, when Baudhayana in India stated the theorem explicitly. We read:

'If a rope is stretched along the diagonal's length, the resulting area will be equal to the sum total of the area of horizontal and vertical sides taken together.'

Baudhayana had discovered the theorem for practical purposes. At the time, Indians began to construct religious altars in various geometric shapes. When trying to construct an altar with the same area as two smaller ones, he found the pythagorean theorem (remember the image from highschool with the triangle and the three squares attached to each side).

This type of investigation also gave him the value of the square root of 2 as 1 + 1/3 + 4×1/3 - 1/34×1/4×1/3, which is correct to five decimals! (For the mathematicians who read this, Baudhayana didnt give a proof, but the sequence suggests he used a clever geometric demonstration, which can be found with a simple google search).

Baudhayana also attempted to make a circular altar with (approximately) the same area as one of his square altars. For this he needed an rough approximate value of pi. 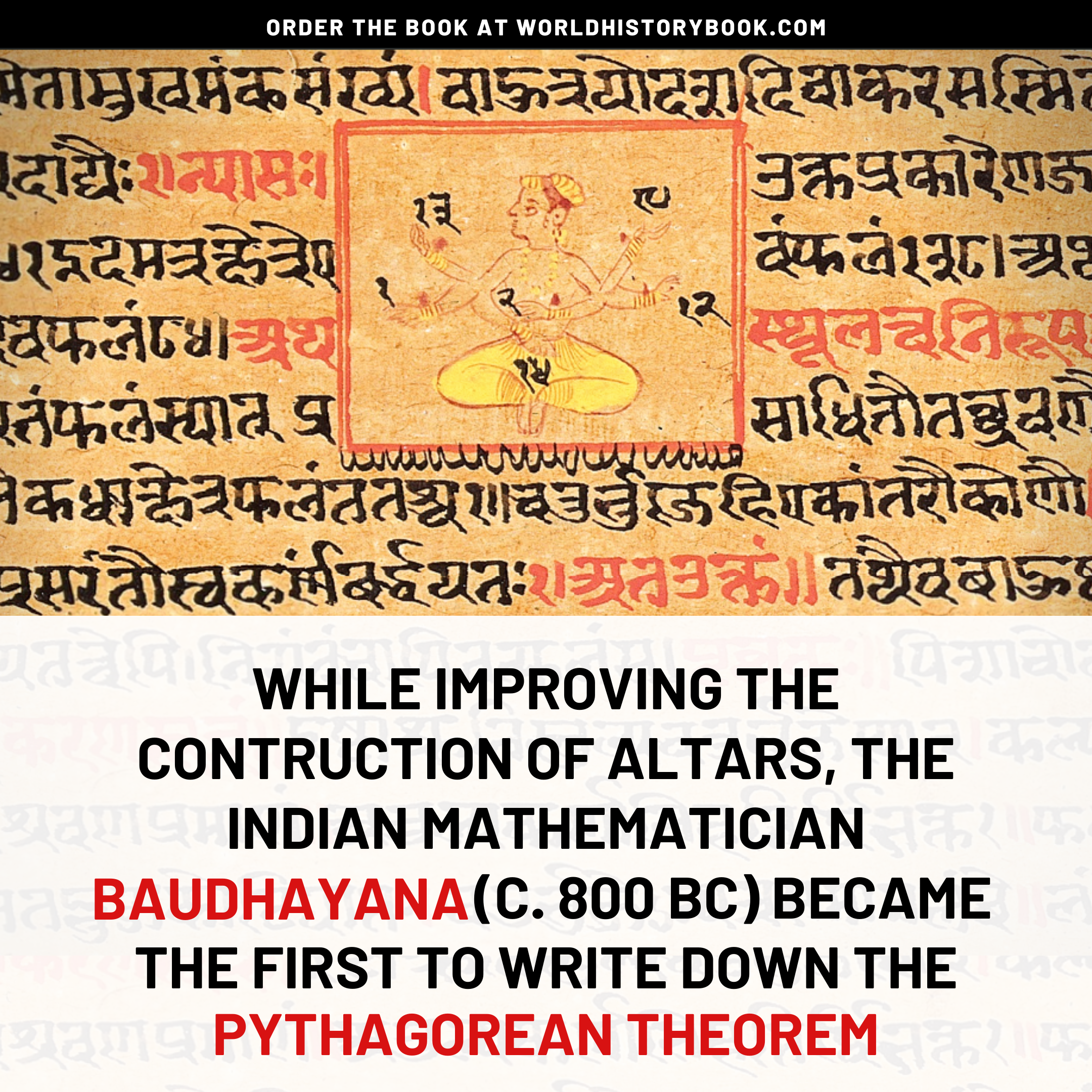 The Pythagorean Theorem in China

There might also be a proof from China, which might even predate Pythagoras. It can be found in the Zhoubi Suanjing, a book dated to c. 100 BC, but which might contain earlier material and is attributed to Shang Gao, the astronomer of the influential Duke of Zhou, who lived in the 11th century BC.

Finding out what the deal was, I had to dive deep into the literature and I even contacted a historian who had worked on the translation of the document. It finaly led me to update the wiki page on the topic.

These were my conclusions. The book definitely makes use of the Pythagorean Theorem on various occasions and might also contain a geometric proof of the theorem for the case of the 3-4-5 triangle (but the procedure works for a general right triangle as well). But unfortunately, the text isn't very clearly written and only a favorable interpretation, with commentary by a modern scholar makes it possible to read a proof in the text (See Geometrical Figures and Generality in Ancient China and Beyond by Karine Chemla). Given this interpretation, however, it does give an elegant proof of the theorem!

In the 3rd century AD, Zhao Shuang (3rd century CE) did add a commentary to the text, which included the diagram depicted in this post, which might correspond to the geometric figure alluded to in the original text (although Zhao only refers to the image in another context). The image does make the interpretation of a proof more plausible, as this figure can indeed be used to proof the theorem. 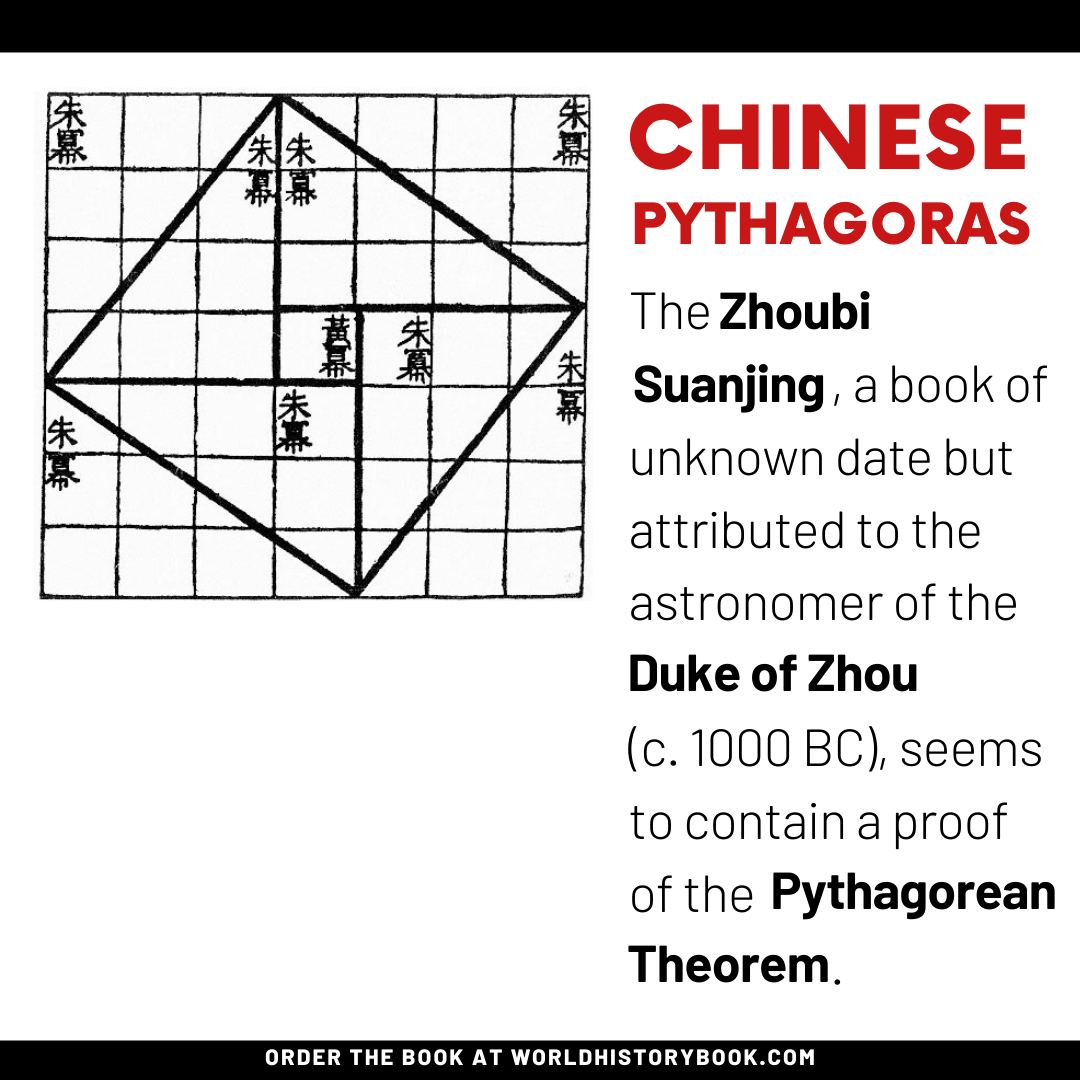 Thales is considered the first person to practice math for its own sake and not for some practical reason (for instance, for building projects or to record economic transactions). Thales studied math because he wanted to understand math, and for no other reason.

He was also the first person to formally proof a theorem, meaning that he purposefully set out to show with absolute certainty that his theorems were true, starting with self-evident axioms (assumption) and using accepted logical steps.

Earlier mathematicians often gave specific numerical examples to make it plausibe their theorem was valid in general. In cases where rigorous logic was used, such as in India, there was no conventional structure of proof consistently invoked as essential to the validation of mathematical theorems.

His most famous proof is of a theorem now called Thales' theorem, in which he proved that a triangle with one side being the diameter of a circle and all corners of the triangle on the circle, always has an angle of 90 degrees (the proof can be found in my book in small steps understandable for the general public). 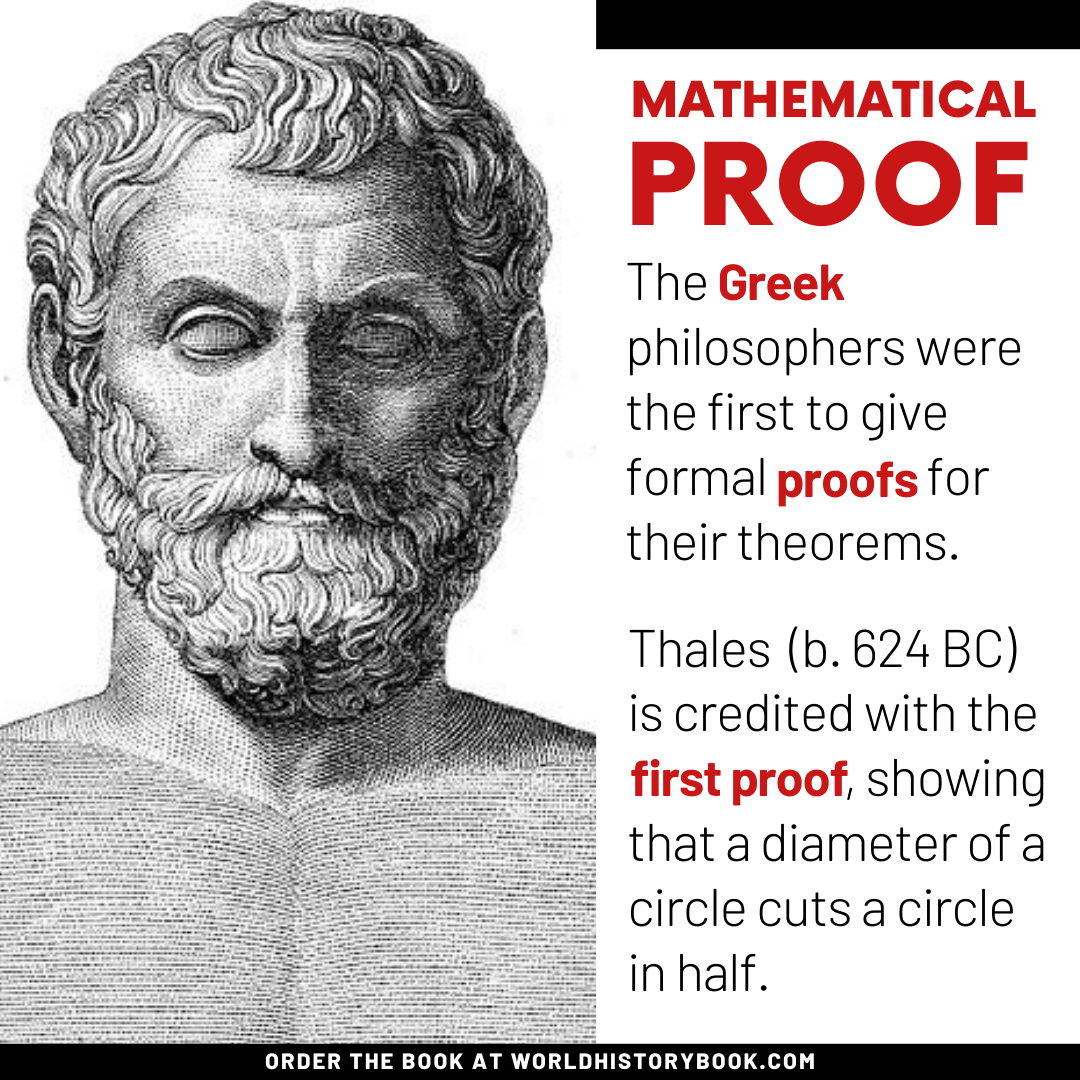 Geometry reached its mature form around 300 BC, when Euclid connected all proofs that had been developed up to that point and showed they could al be derived from just 5 self-evident assumptions, known as axioms.

One of the axioms, for instance, tells us we can always connect two point with a line. Who could doubt that? Accepting the axioms, logic makes it necessary that the all of Euclids theorems are also correct. 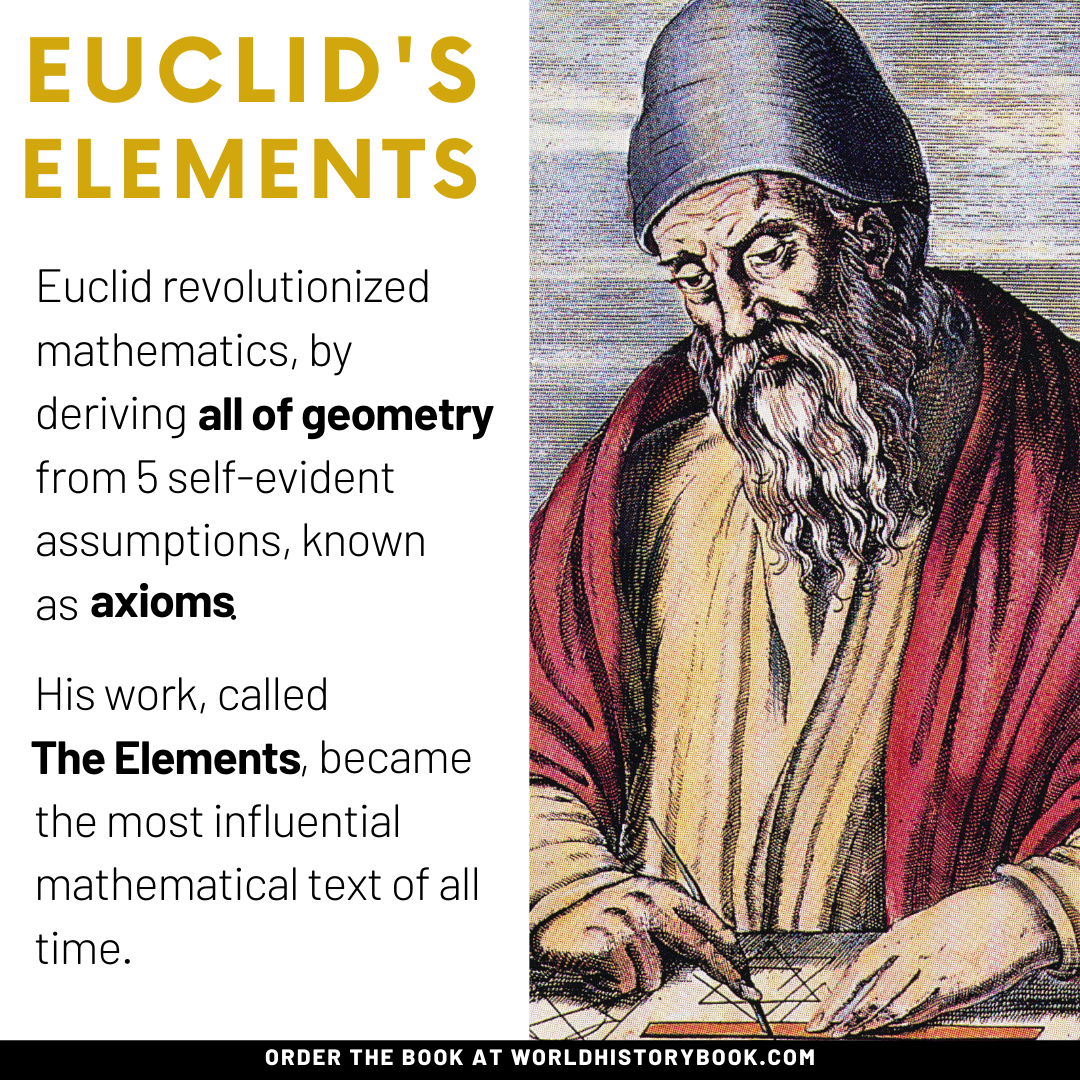 The Discovery of Zero

The Babylonians had simply left a space open when they needed a zero in writing down large numbers. The Egyptians had a symbol for zero ("nfr"), which they used it in bookkeeping to denote "no money," and in architecture to denote the ground level (the layers of stones of a pyramid were counted in "cubits above nfr").

The first person to use the zero not just as a placeholder or a symbol for "nothing," but as a number to be used in calculations was Brahmagupta (c. 598-668). He gave the rules of calculating with zero that we are still familiar with today, such as:

Somehow, the Greeks had never considered either the zero nor negative numbers. Their focus had been geometry, where numbers corresponded to lengths of lines. Since lines cannot be negative, they never considered negative numbers as viable solutions. Also, Roman numerals dont require a zero in larger numbers (for instance "10" has a zero in it, but in Roman numerals this is simply "X").

The image in the post is the first use of the zero as a placeholder, predating Brahmagupta. 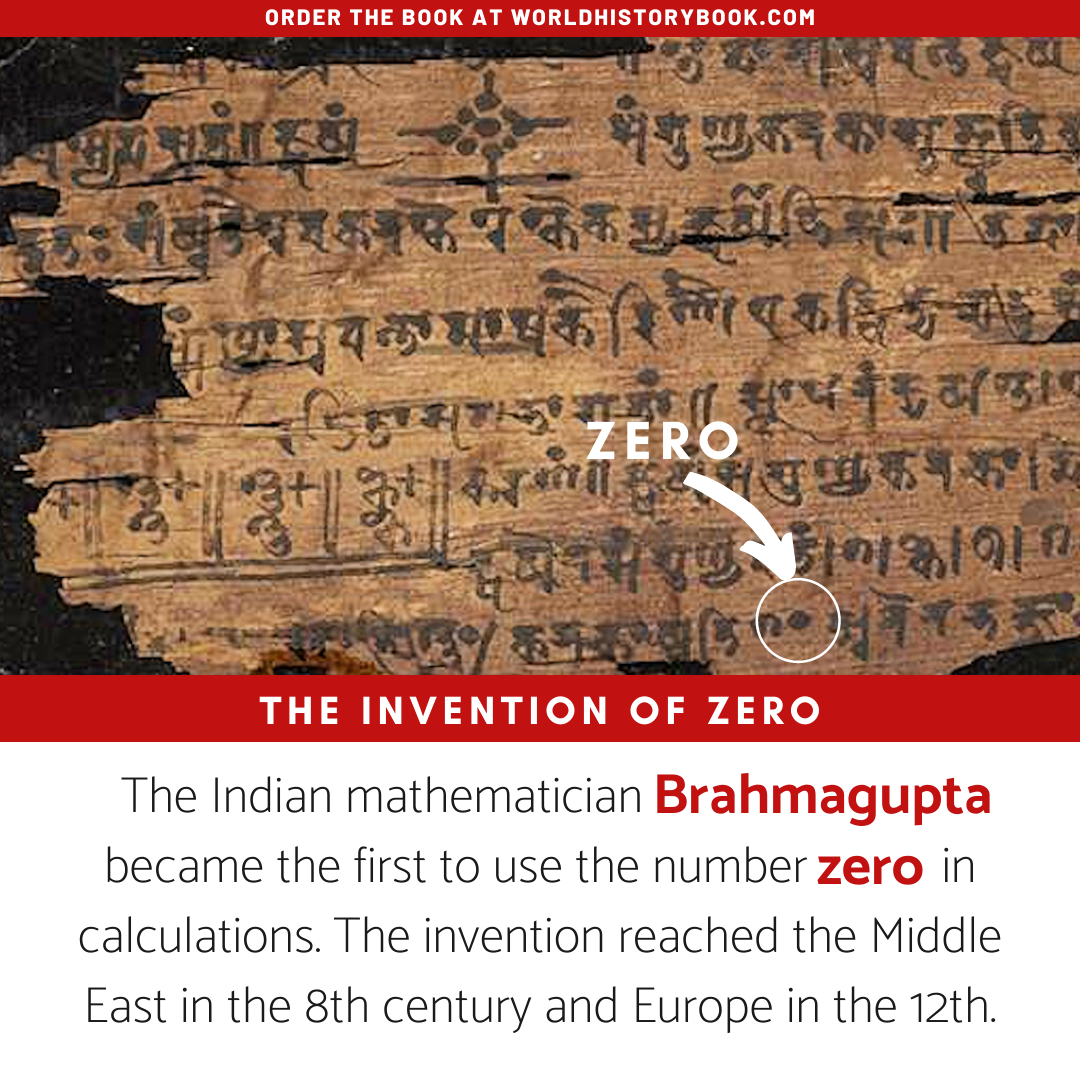