A few periods in world history stand out far above others in terms of human achievement. One of these rare periods was the Islamic Golden Age which started in the 8th century Abbasid caliphate.

More in this in the next posts!! 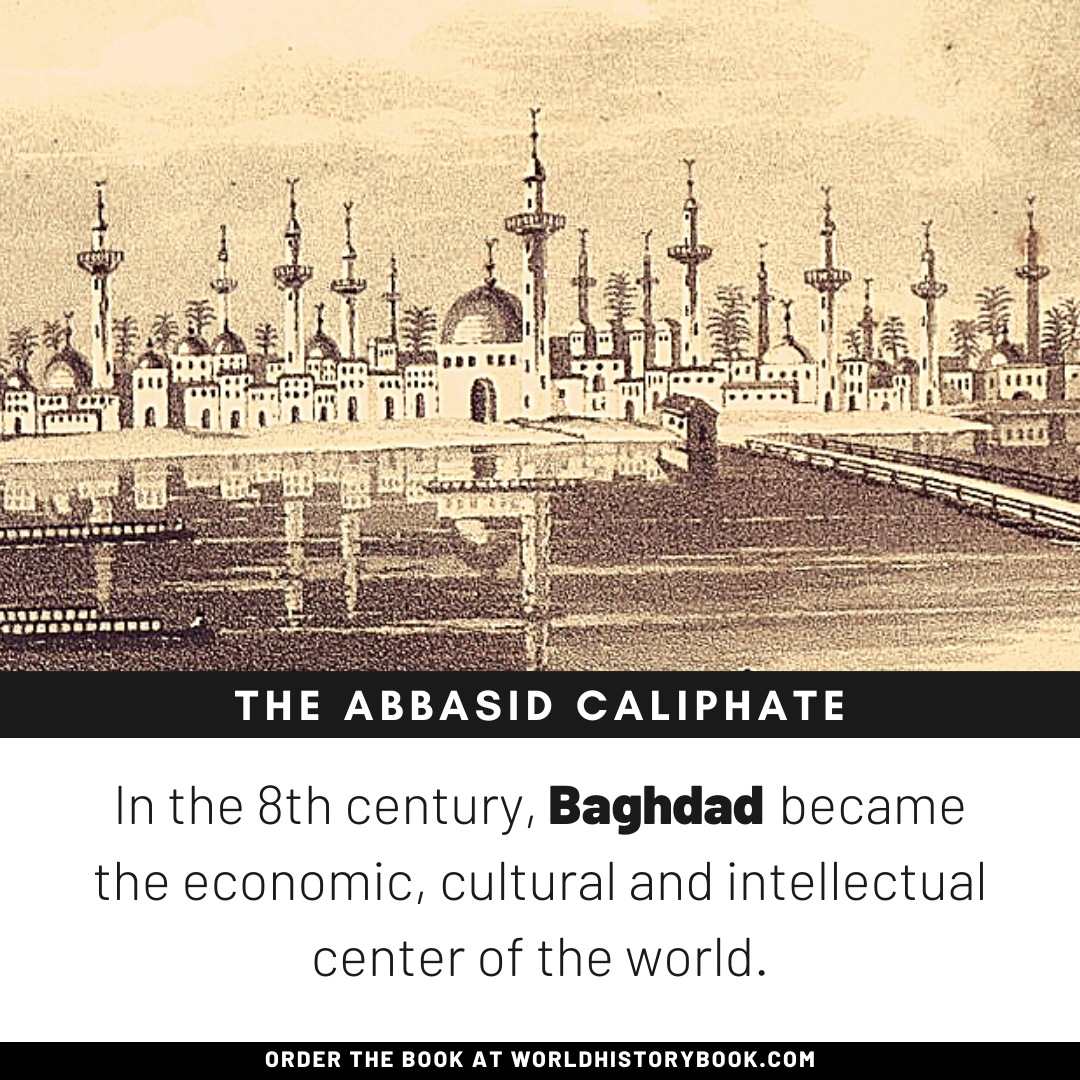 The House of Wisdom

While Europe was in decline and had lost most of its intellectual heritage, the intellectuals of the House of Wisdom (8th century) translated many of the Greek works into Arabic, preserving them for later generations. With an incredible openness to new and different ideas, they also were inspired by Jewish, Christian, Persian, and Indian knowledge.

The image is beautifully illustrated Maqamat, which can be look into for free in the Bibliotheque Nationale de France. It depicts intellectuals reading in a Baghdad library. 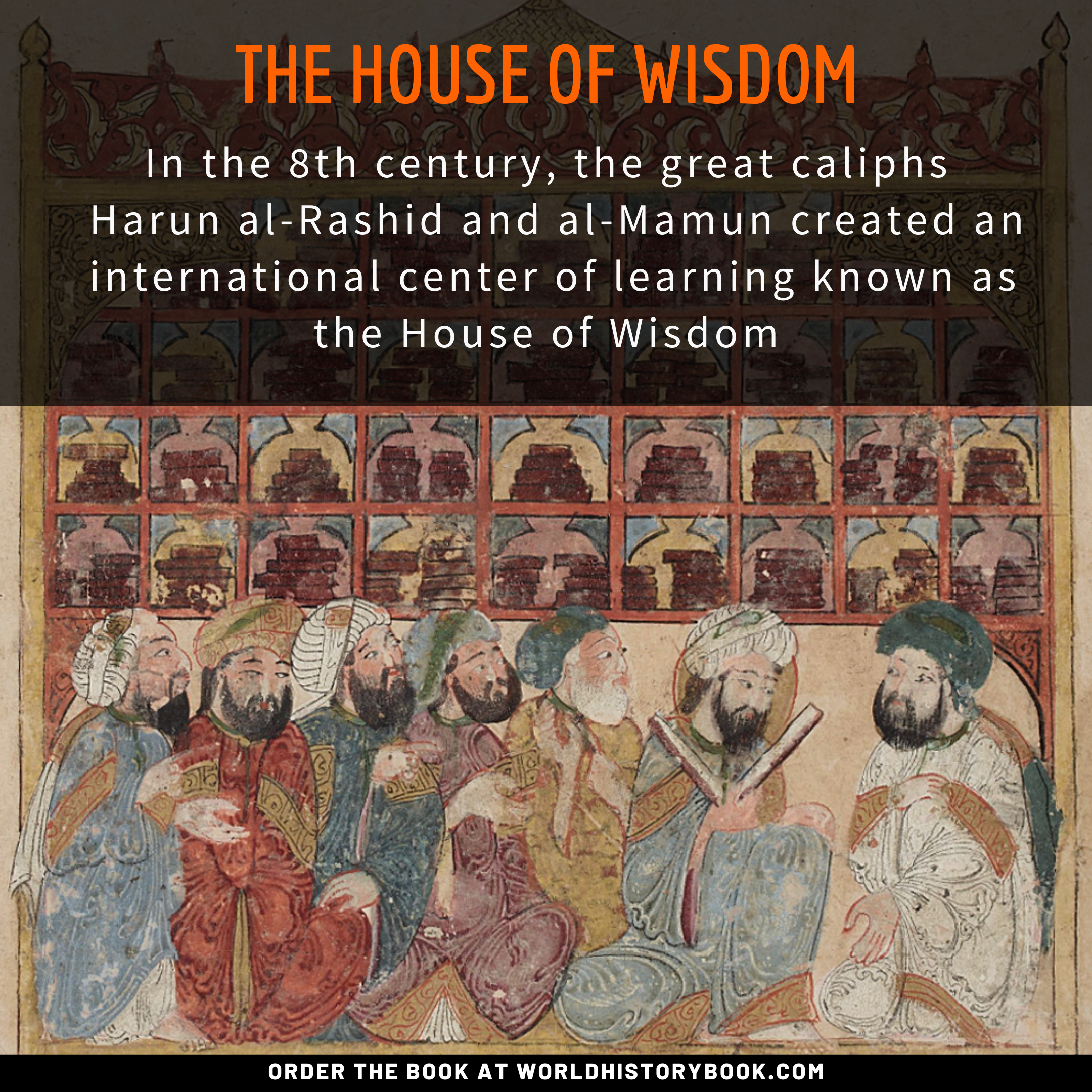 The Islamic Conquest of Spain

From the 8th till the 15th century Spain was controlled by Muslim forces (first all of Spain and later part of Spain).

Surprisingly, the occupation wasn't all bad for Europe, as the Arabs brought in a lot of the ancient texts from Greece. The English scholar, Adelard of Bath, for instance, went to Spain and translated the Elements, a great work of mathematics by the Greek mathematician Euclid.

Depicted is a battle from a European Spanish manuscript. Notice the European Christians held crosses and a flag witb Maria and child. 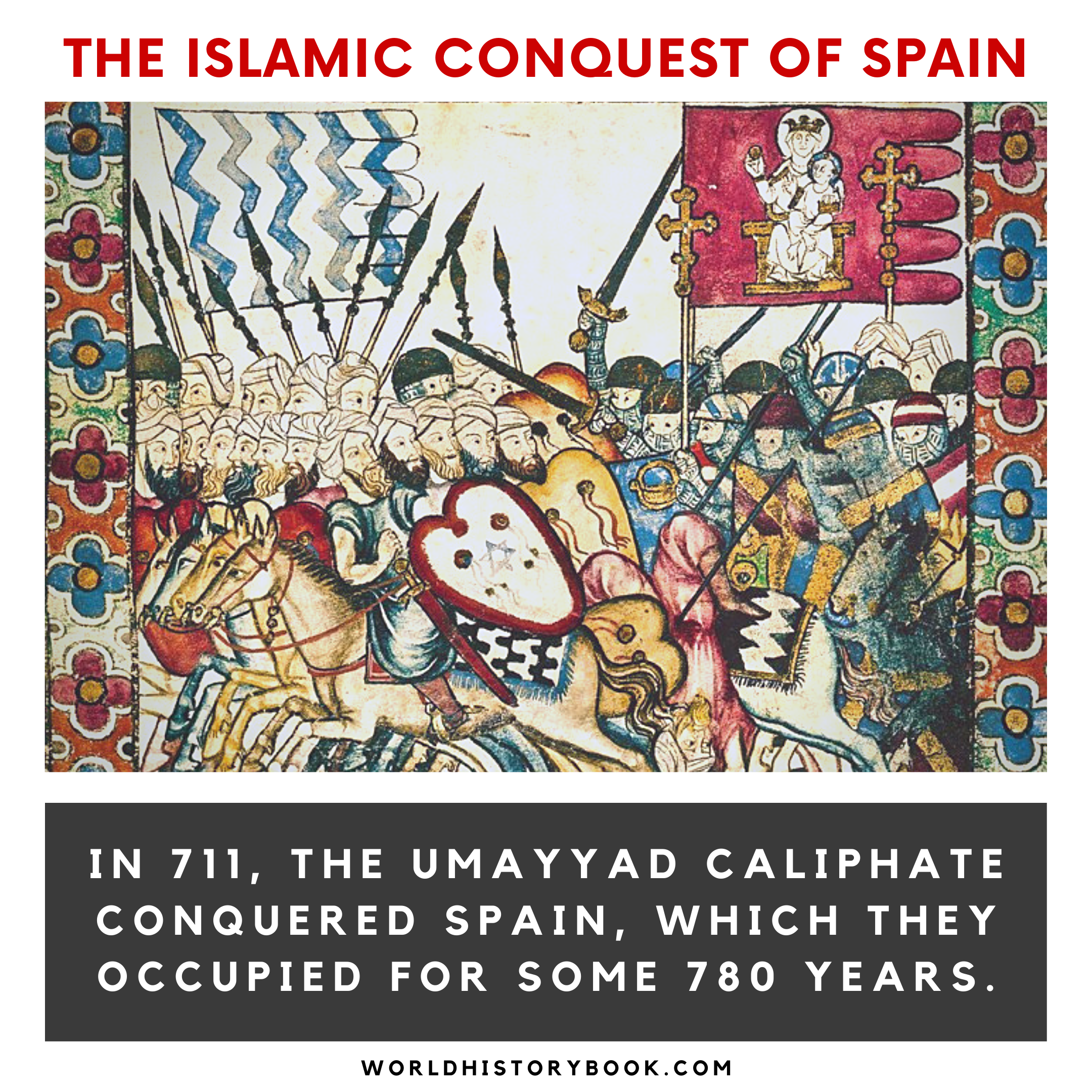 After the Umayyad Muslims had conquered the Visigoths of Spain, they planned an invasion of France. Their advance was finally halted in 732 by Charles Martel (meaning "the Hammer," named this way because of his power on the battlefield).

With this victory, Charles Martel consolidated the power of the Franks. His grandson, Charlemagne (literally "Charles the Great") would conquer a large part of Europe for the Franks and reclaimed the title Roman Emperor.

Al-Hambra in Granada, Spain, is one of the most beautiful examples of Islamic art and archtecture. In this post, I have focused on abaresque—the intricate reptetitive geometric and floral patterns that can be found in the form of mosaics abd relief in much of the walls of the palace. 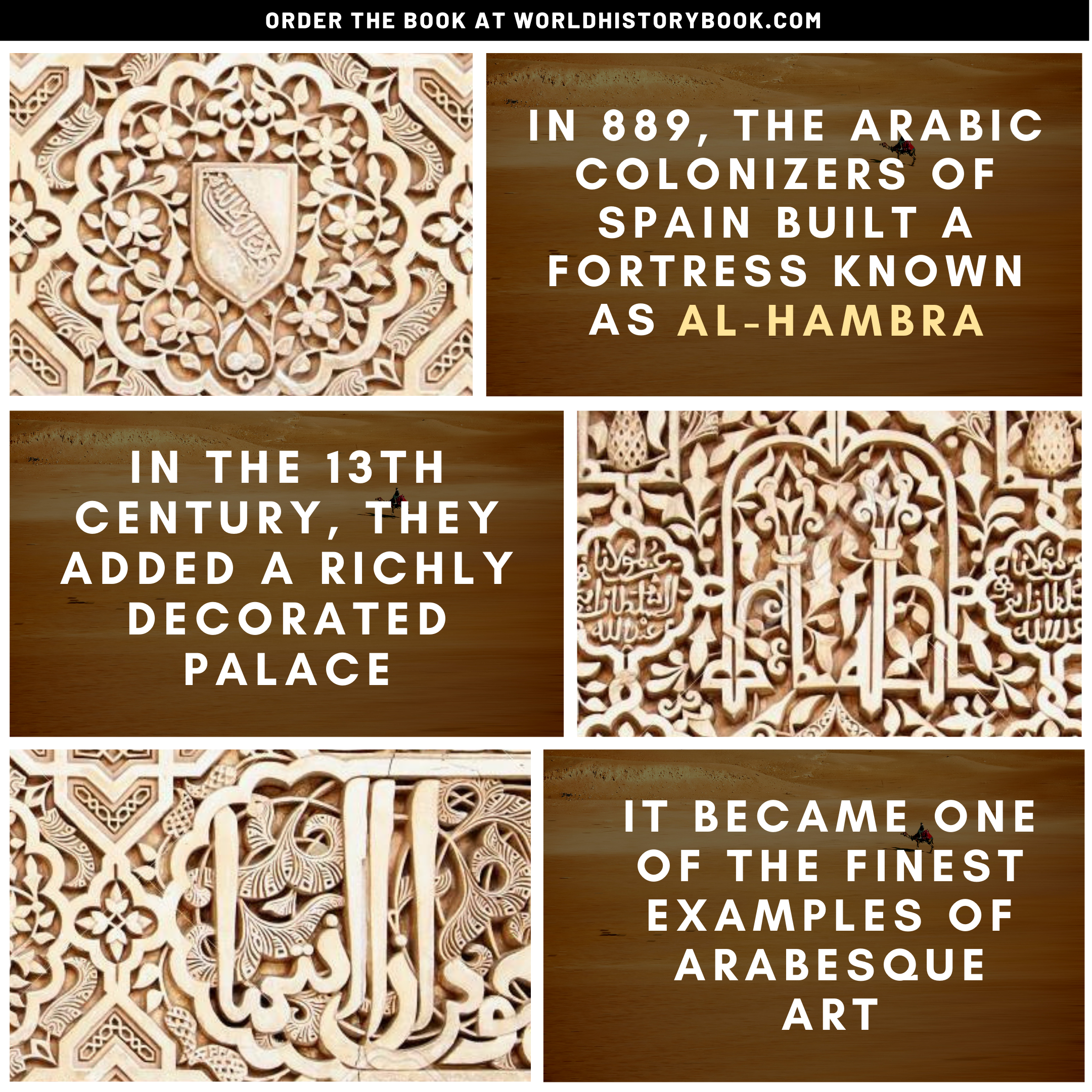 The Alcazar of Seville

The Alcazar in Sevilla is a royal palace designed by Muslim architects, but comissioned by the Christian king Peter of Castile. It was built on the site of a Muslim fortress that had been destroyed when the Christians had taken back Sevilla.

The adoption of Islamic architecture by Spanish Christians—a style called Mudejar—was common in medieval Spain. It was called Mudejar. 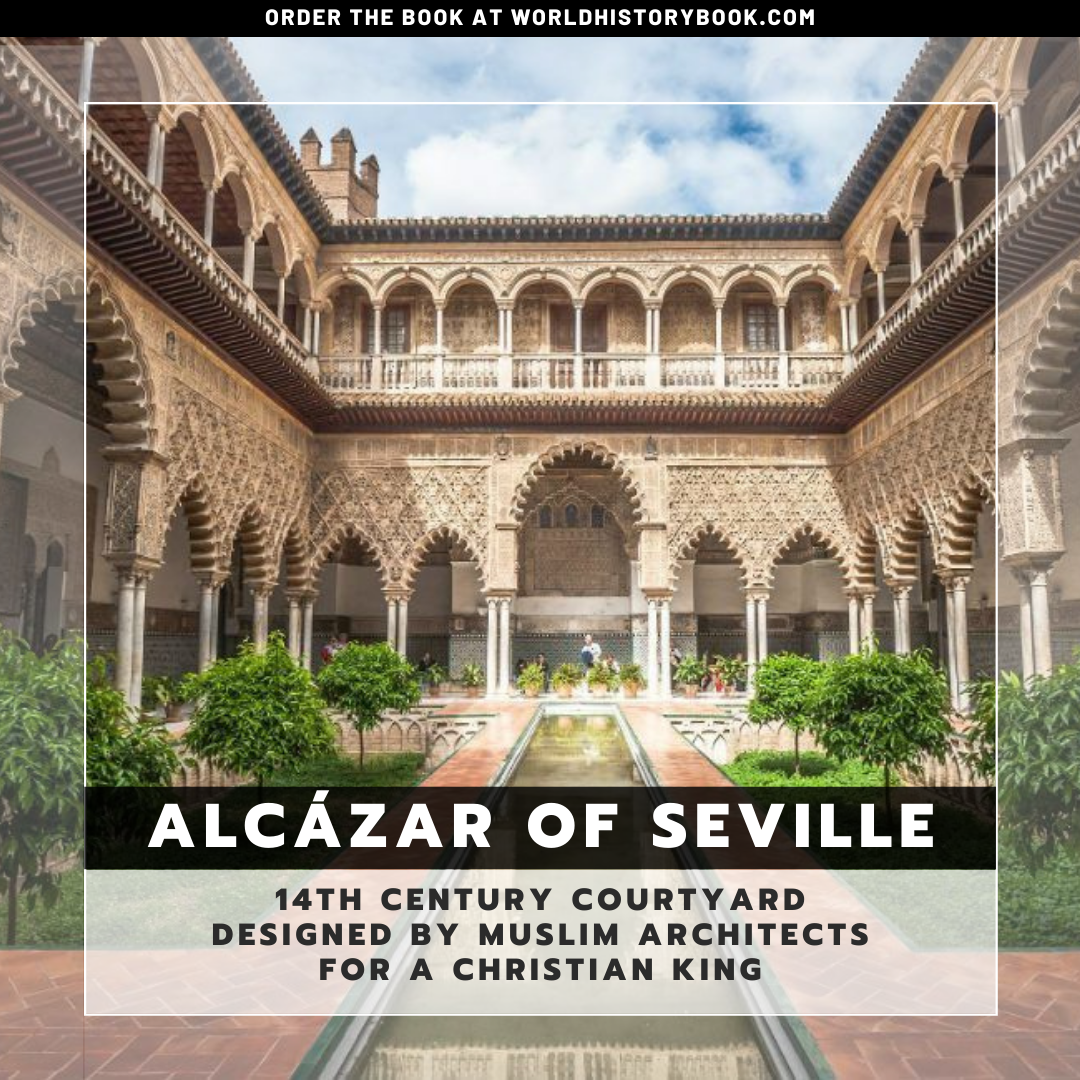 The Abbasid Caliphate brought Islamic civilization to its highest point. It was founded by As-Saffah in 750, but was properly stabilized by his successor Al-Mansur, who also founded Baghdad. During his rule, an embassy of Indian scholars brought the influential work Brahmasphutasiddhanta, which contained information on how to calculate with negative numbers and with zero and introduced the Hindi numeral system to the Arab world (this is the numeral system we use to this day! 0-1-2-3-4-5-6-7-8-9)

His successor Al-Rashid (who is depicted in the post as one of the stars of the "1001 nights" fairytales) and his son Al-Mamun founded the House of Wisdom to which they invited intellectuals from many of its surrounding cultures.

Al-Mamun went to great lengths to collect works of science. In a peace deal with the Eastern Roman Empire (the Byzantine Empire), he acquired the highly valued "Algamest", a work about the motion of the planets in the solar system by the Greek philosopher Ptolemy. Ptolemy's system could accurately predict the complex motion of the planets. Only in the 15th century did Copernicus manage to improve on the system. 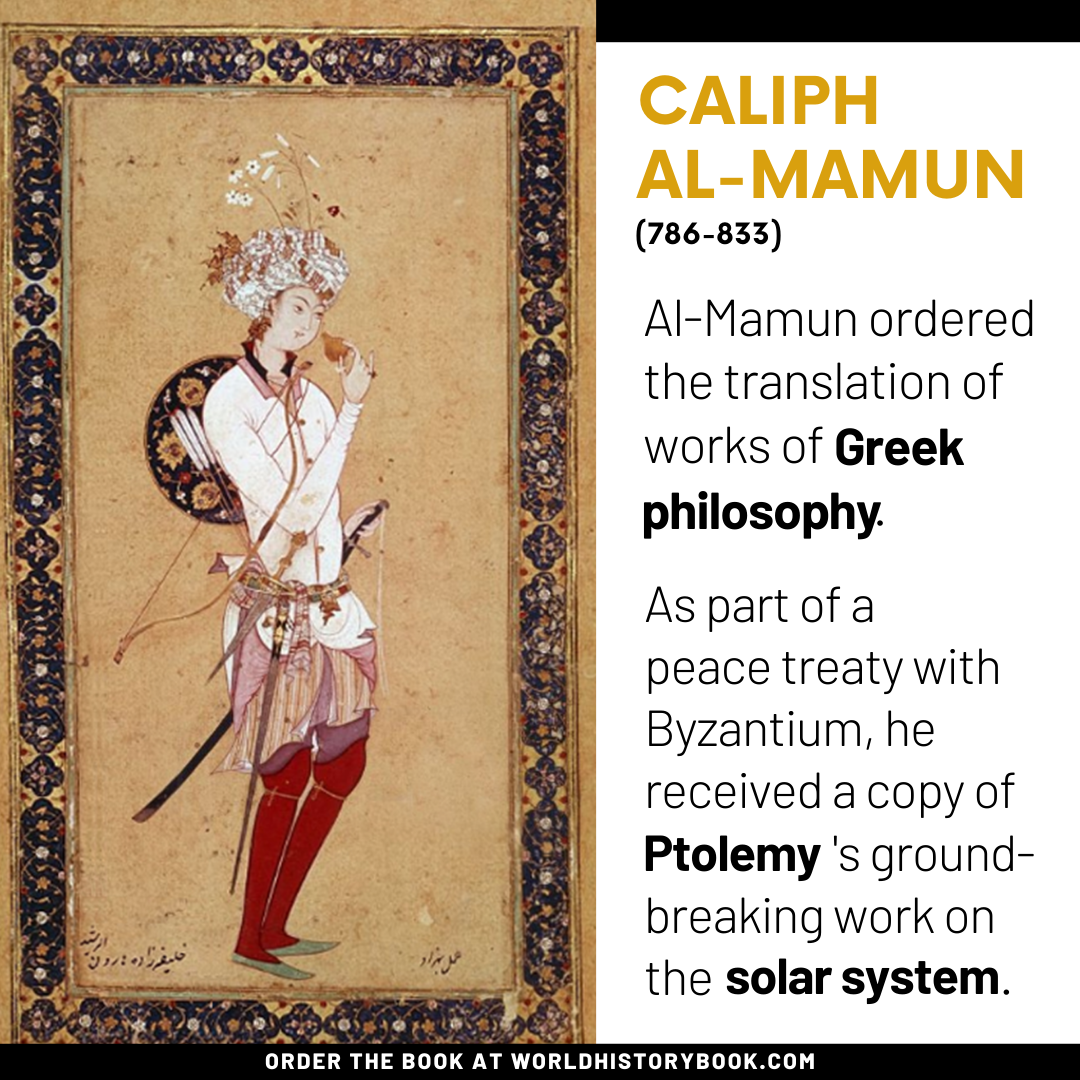 In the High Middle Ages, a vast amount of Arabic texts were translated into Latin. Impressed by Arabic science, various Western intellectuals used Arabic pseudonyms to make their work seem more authoritative. A common pseudonym in alchemy was Geber, a westenized version of Jabir, the greatest medieval (al)chemist. In modern historical research, these authors (from the 13th and 14th centuries) are referred to as "pseudo-Geber". 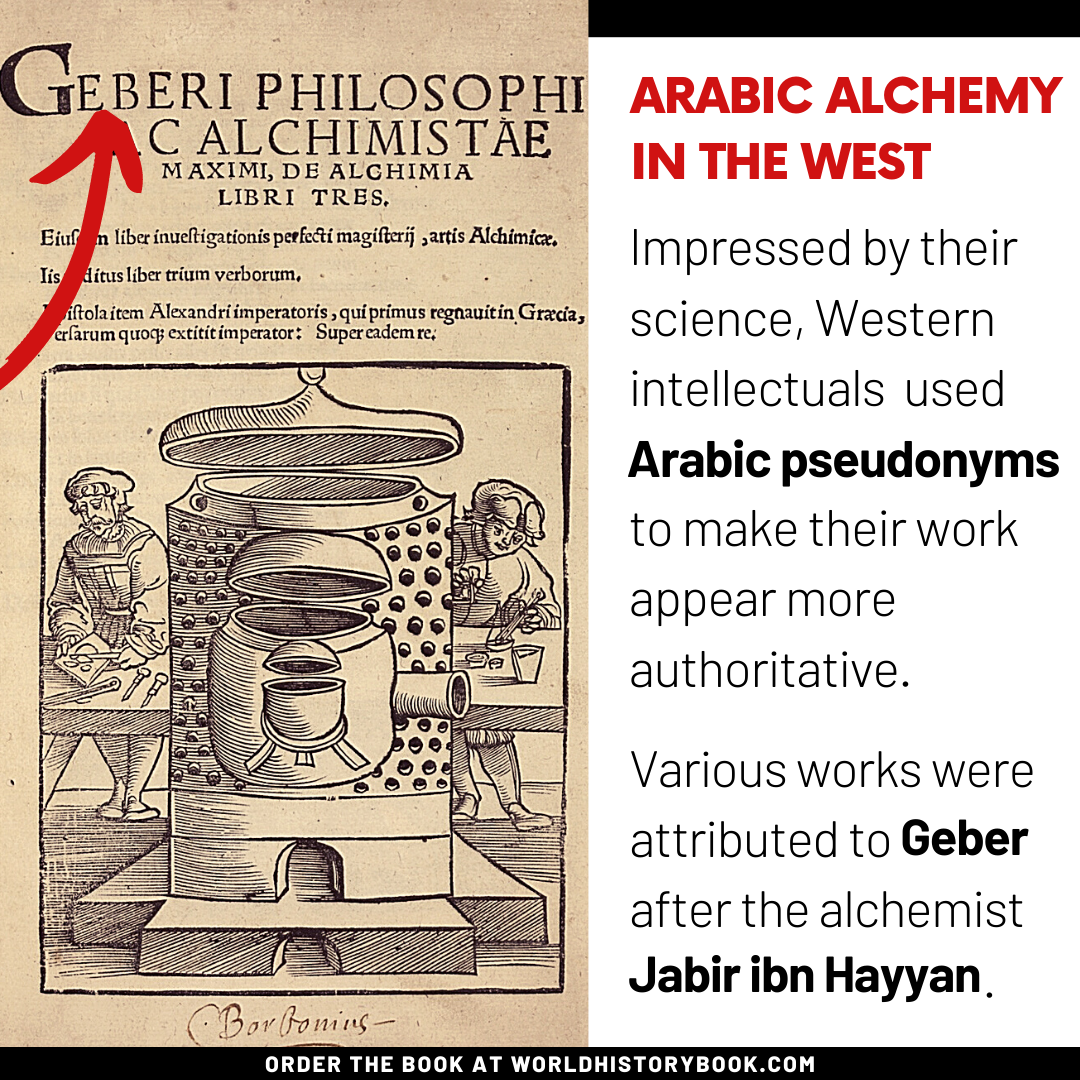 One of the most important mathematicians of the Islamic Golden Age was al-Khwarizmi (780-850). He made his most important contribution to the field of algebra.

Algebra refers to the process of manipulating equations to find the value of unknown variables (in high school, this often boils down to "finding the x").

The Babylonians had already found solutions to various equations, but algebra truly took off when the Greek mathematician Diophantus of Alexandria (third century AD) wrote a series of books called Arithmetica, in which he studied various equations to find their integer (whole number) solutions.

Al-Khwarizmi systemetized this way of thinking when he discovered systematic ways of solving equations, which he described as "abandoning the practice of solving particular [math] problems" and instead focusing on "a general series of principles and rules." Today such a procedure is called an algorithm, named after al-Khwarizmi.

Al-Khwarizmi is also credited with introducing the Indian numeral system to the Arabic world and later to Europe.

Oh, and the statue depicted is of course totally modern. There arent many depictions of the medieval Islamic scholars unfortunately. 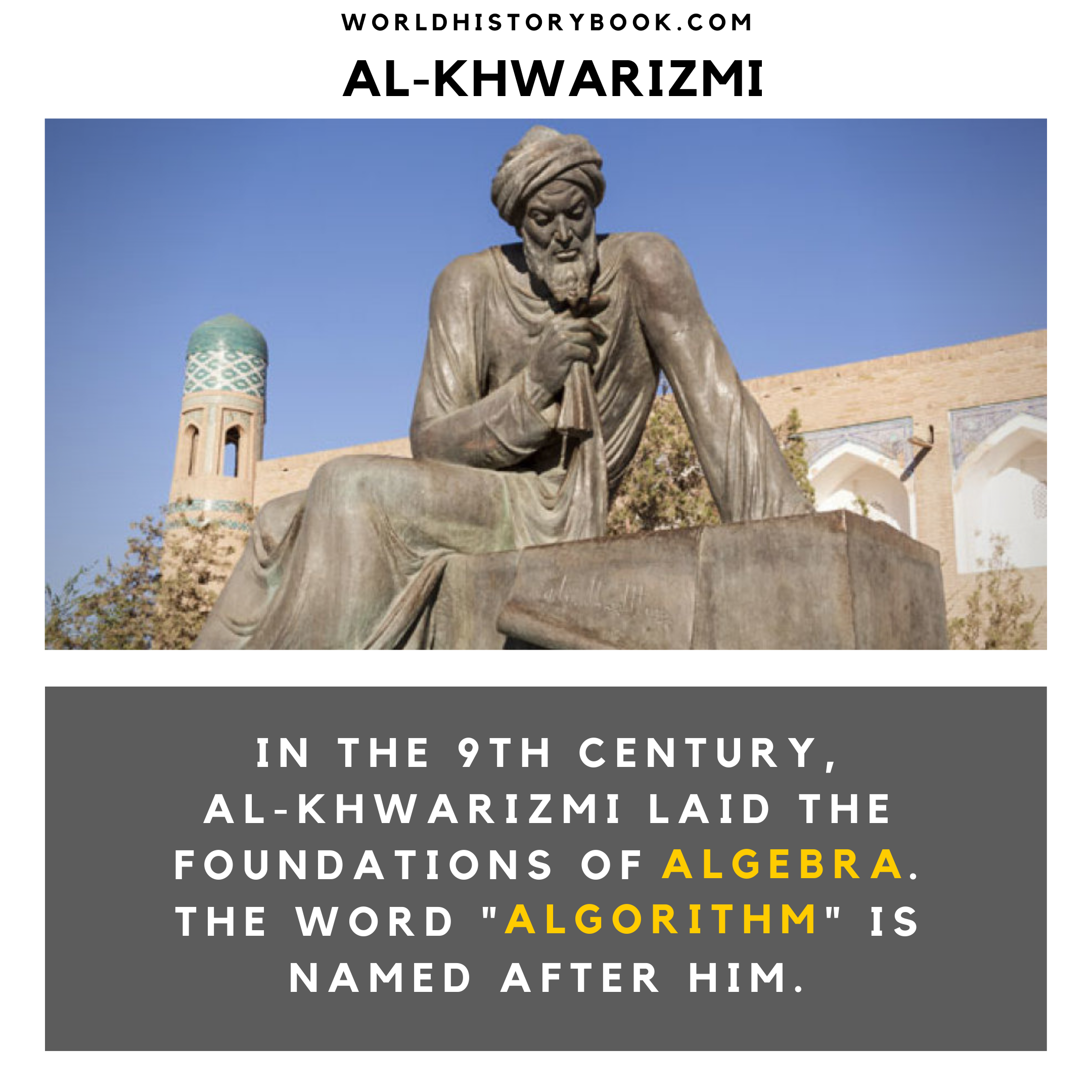 The Muslim engineers of the Middle Ages were known for their wildly creative machines, such as intricate clocks with many moving parts, simple robots that played tunes and pumps to displace water (more details in later posts)

In 803 AD a delegation of Arabs arrived in Germany to meet with Charlemagne with gifts from Caliph Harun al-Rashid. One of the gifts was a water clock that chimed every hour. The Europeans had never seen anything like this before! Some of the people at the court thought it operated on satanic magic, but after inspection they concluded:

'[It is a] marvelous mechanical contraption in which the course of the twelve hours moved according to a water clock, with as many brazen little balls, which fell down on the hour and through their fall made a cymbal ring underneath. On this clock there were also twelve horsemen who at the end of each hour stepped out of twelve windows, closing the previously open windows by their movements'. 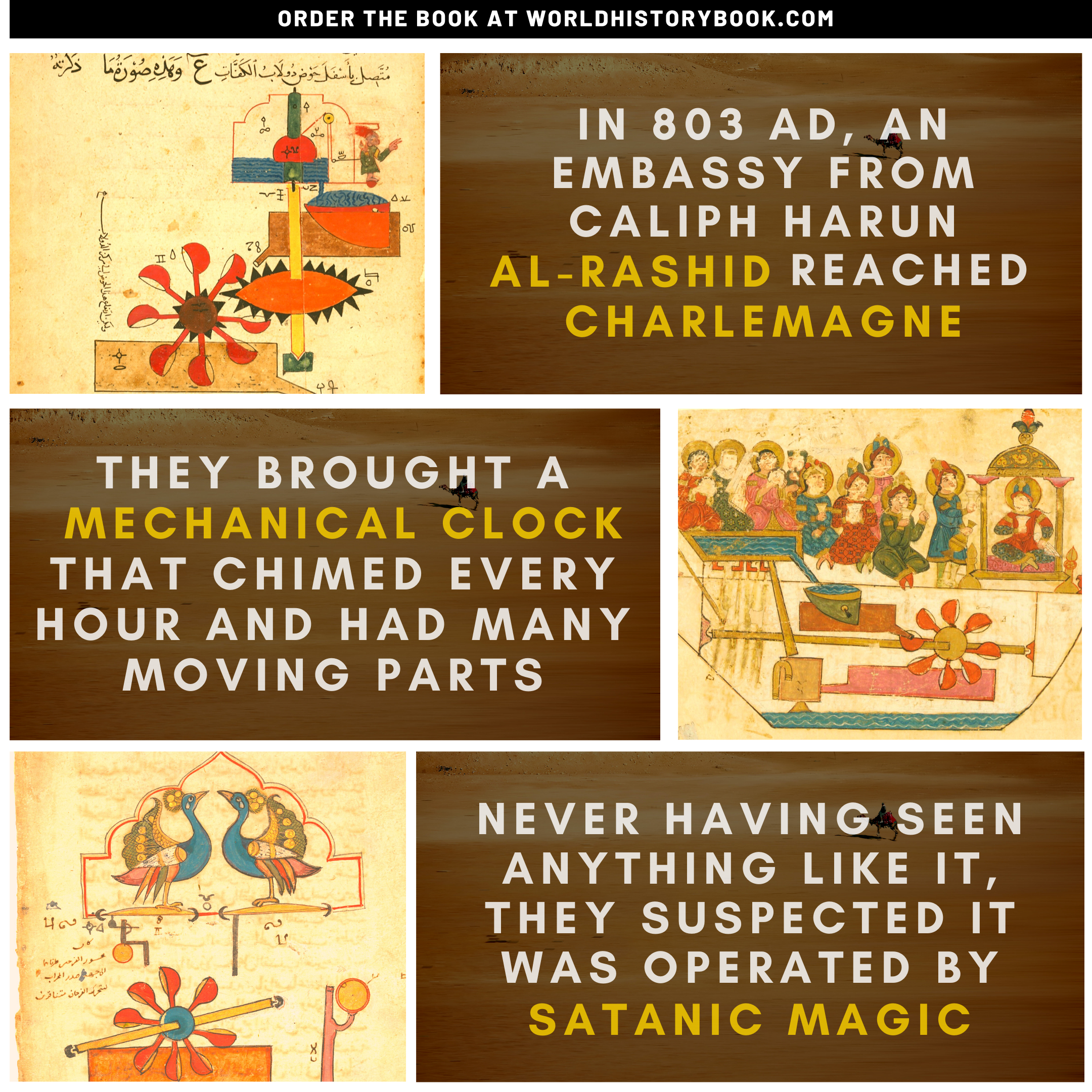 The Muslim engineer Al-Jazari (1136-1206 AD) created a number of impressive mechanical devices, recorded in his 'Book of Knowledge of Ingenious Mechanical Devices'.

One of his most ingenious designs was his elephant water clock. The timing mechanism of the clock was based on a water-filled basin hidden inside the elephant. A deep bowl floated in the water, but with a small hole in the center. The bowl took half an hour to fill through this hole. In the process of sinking, the bowl pulls a string attached to a see-saw mechanism in the tower on top of the elephant. This released a ball that dropped into the mouth of a serpent, causing the serpent to tip forward, which pulled the sunken bowl out of the water via strings, allowing it to empty. At the same time, a system of strings caused a figure in the tower to raise his hand and the elephant driver to hit a drum every half an hour. The cycle then repeated itself for as long as balls remained in the upper reservoir to power the emptying of the bowl.

Upon finishing the elephant clock, he wrote: "The elephant represents the Indian and African cultures, the two dragons represents Chinese culture, the phoenix represents Persian culture, the water work represents Greek culture, and the turban represents Islamic culture". This statement examplifies the open intellectual attitude of the Islamic Golden Age. 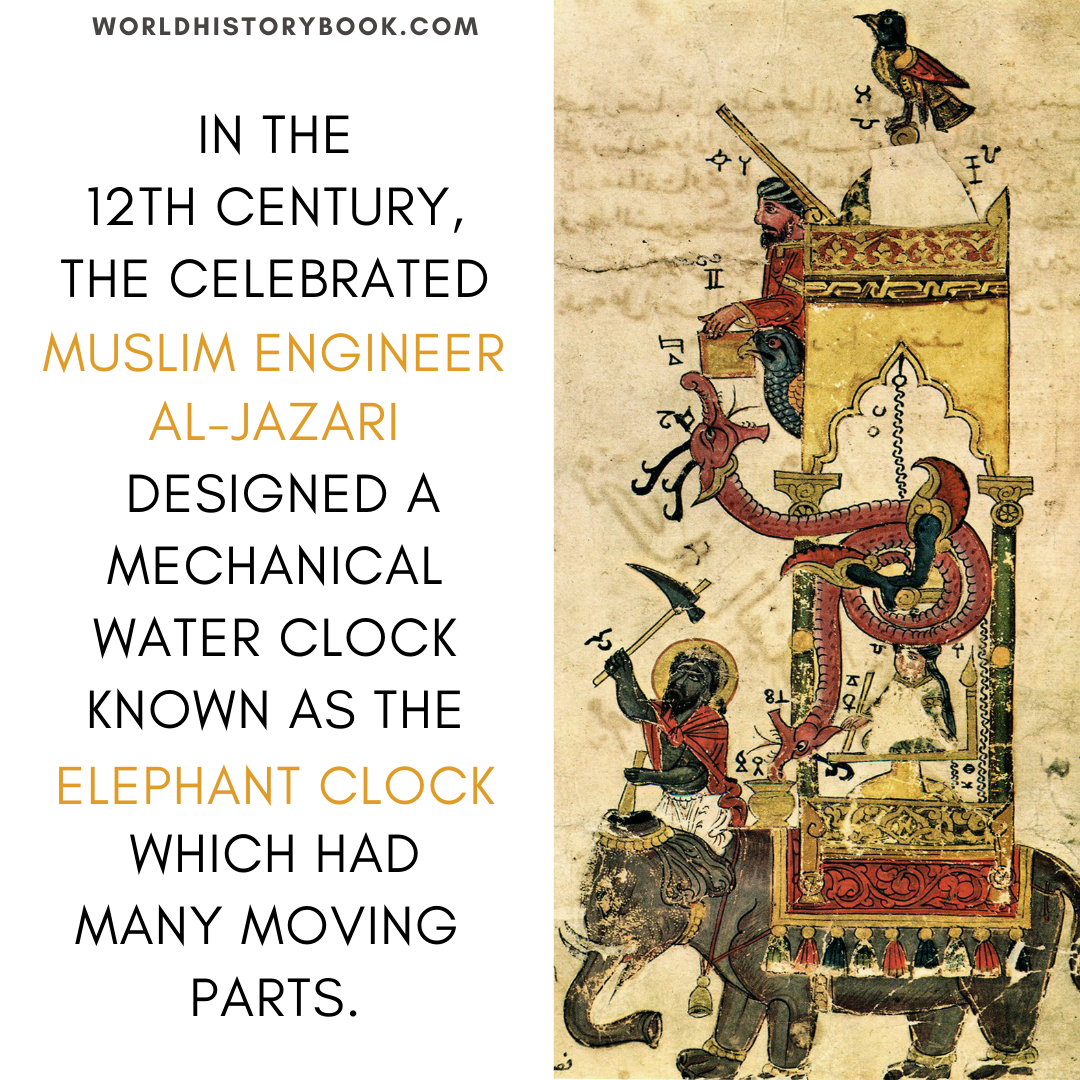 The Islamic engineer Al-Jazari (1136-1206 AD) invented several machines to lift water from a lower to a higher place. One of them was a hydro-powered pump. The flow of water in a river would cause a water wheel to rotate, which caused another wheel to move a pair of copper pistons back and forth. The pistons were attached to pipes that used suction to draw water up to a height of 12 meters. This was the first working example of a double-action piston motion, putting Al-Jazari hundreds of years ahead of his time. 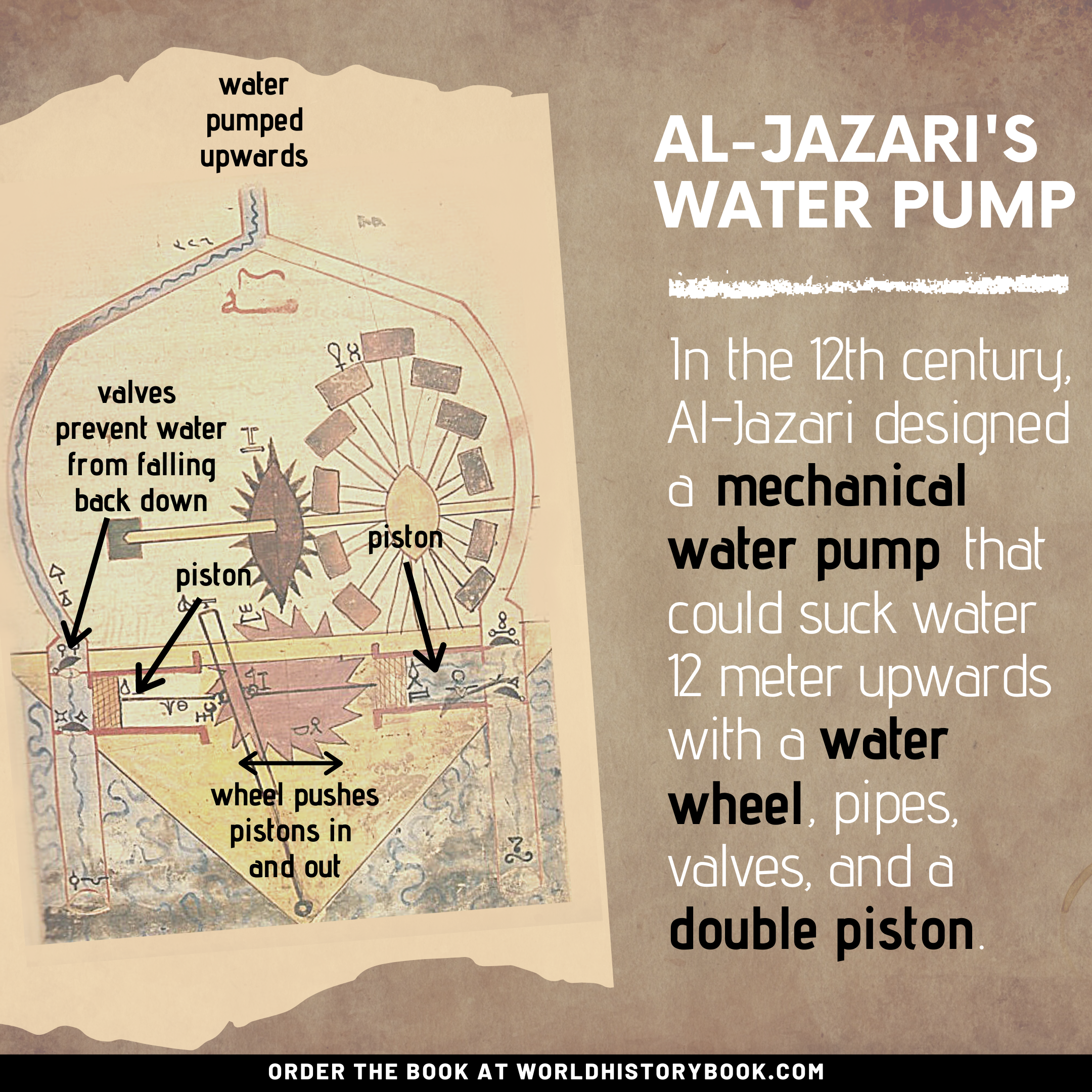