The Origins of Indian History

My next posts will be about the foundations of Indian history, including the ancient civilizations on the continent and the development of Eastern philosophy.

This topic has faaaascinated me since my teenage years and I have studied it ever since.

In the image, you see a famous bust from Mohenjo-Daro, an important city of the first civilization of India, called the Indus Civilization. 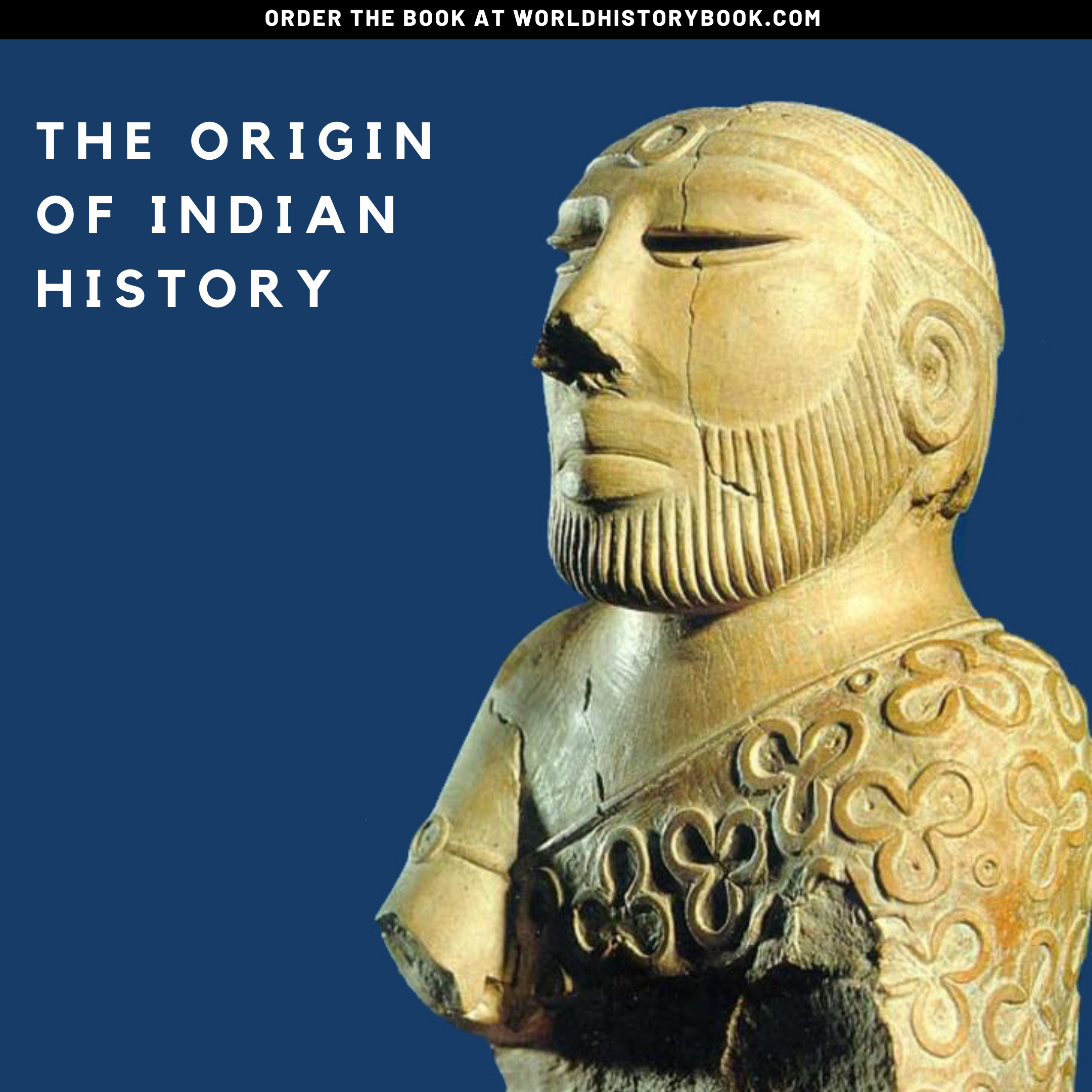 The Great Baths of Mohanjo-Daro

The Bronze Age in India started around 2500 BC. Around this time, small villages grew out to large cities, forming the so-called Indus Valley Civilization. The cities of the Indus Valley are in many ways different from those of Mesopotamia. In its main cities, Harappa and Mohenjodaro, we find no elaborate palaces or temples nor do we find any references to important leaders. However, we do find beautiful baths, lined with bitumen and surrounded by colonnades. 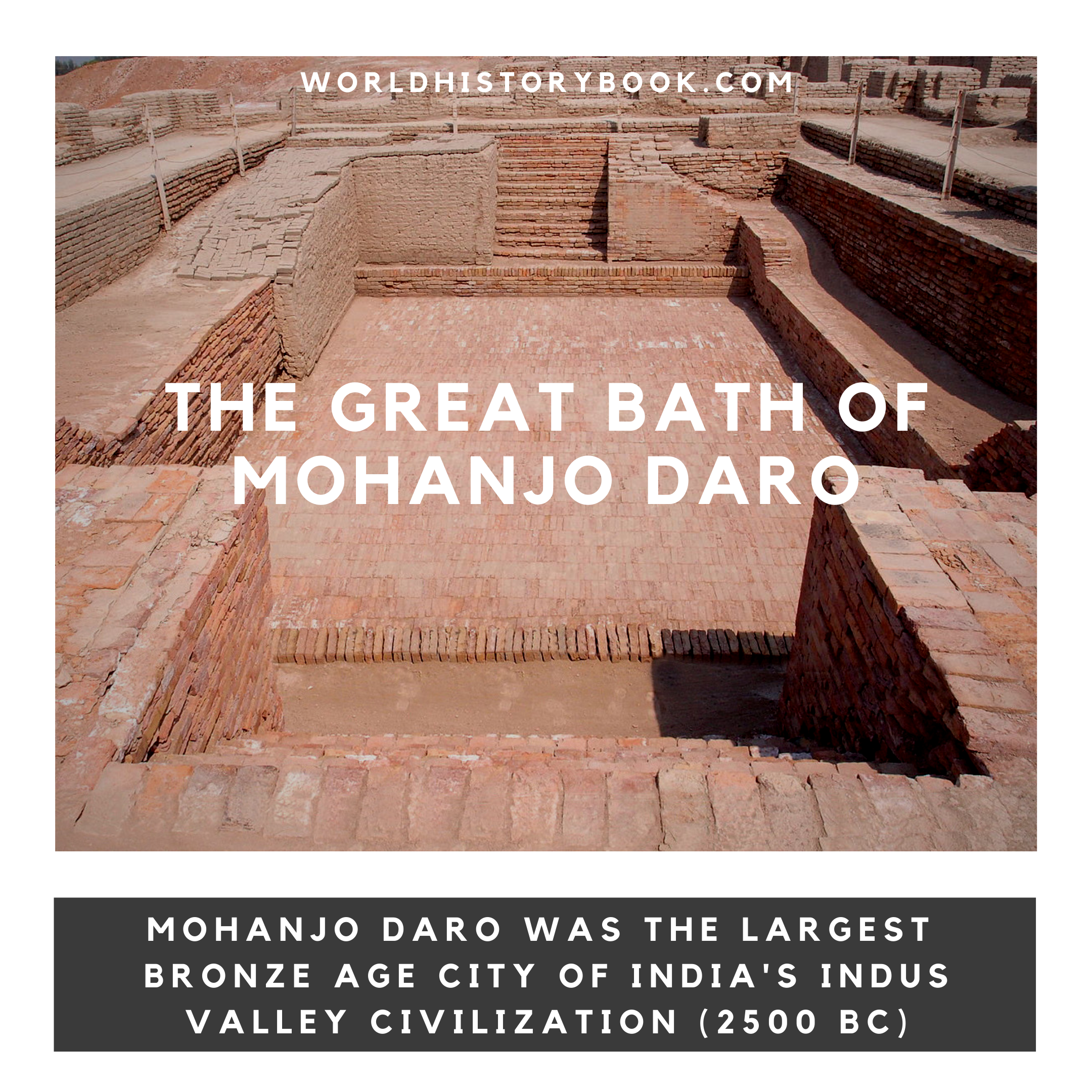 The Indus Valley Civilization that had its peak from about 2600 till 1900 BC is still shrouded in mystery. That the script is still undeciphered doesn't help here.

The top right image depicts one of the most controversial finds. Many claim it depicts a horned god in yoga posture with three faces - similar to images and sculptures we find in mature Hinduism. If so, this might mean that some form of meditiation might already be part of this ancient culture (c. 4000 years old!!!)

Lets's go through the facts. Show this picture to almost anyone and they will recognize the meditative posture, but is it? Seals from Denmark show a horned being in a similar posture and here nobody things of yoga. What about the three heads? Zooming into the picture, a case can be made that the shape of the nose and lips are repeated on the sides of the head. However, people don't usually recognize this until they are pointed to it.

Of course, one image is not enough to make strong claims about the Indus culture, but we can have opinions. I'm always hopeful that this interpretation pans out. What is you opinion? Love to hear from you in the comments. 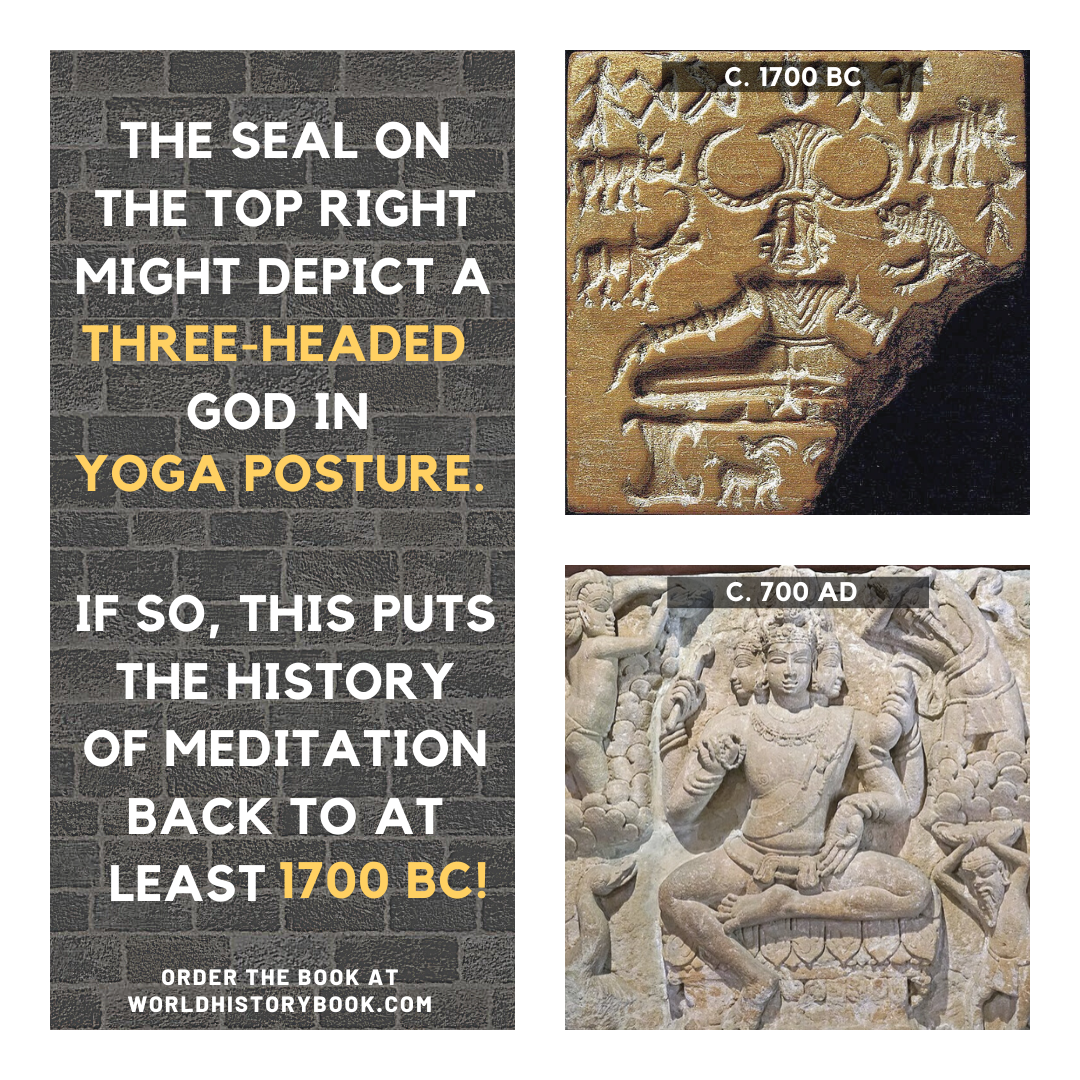 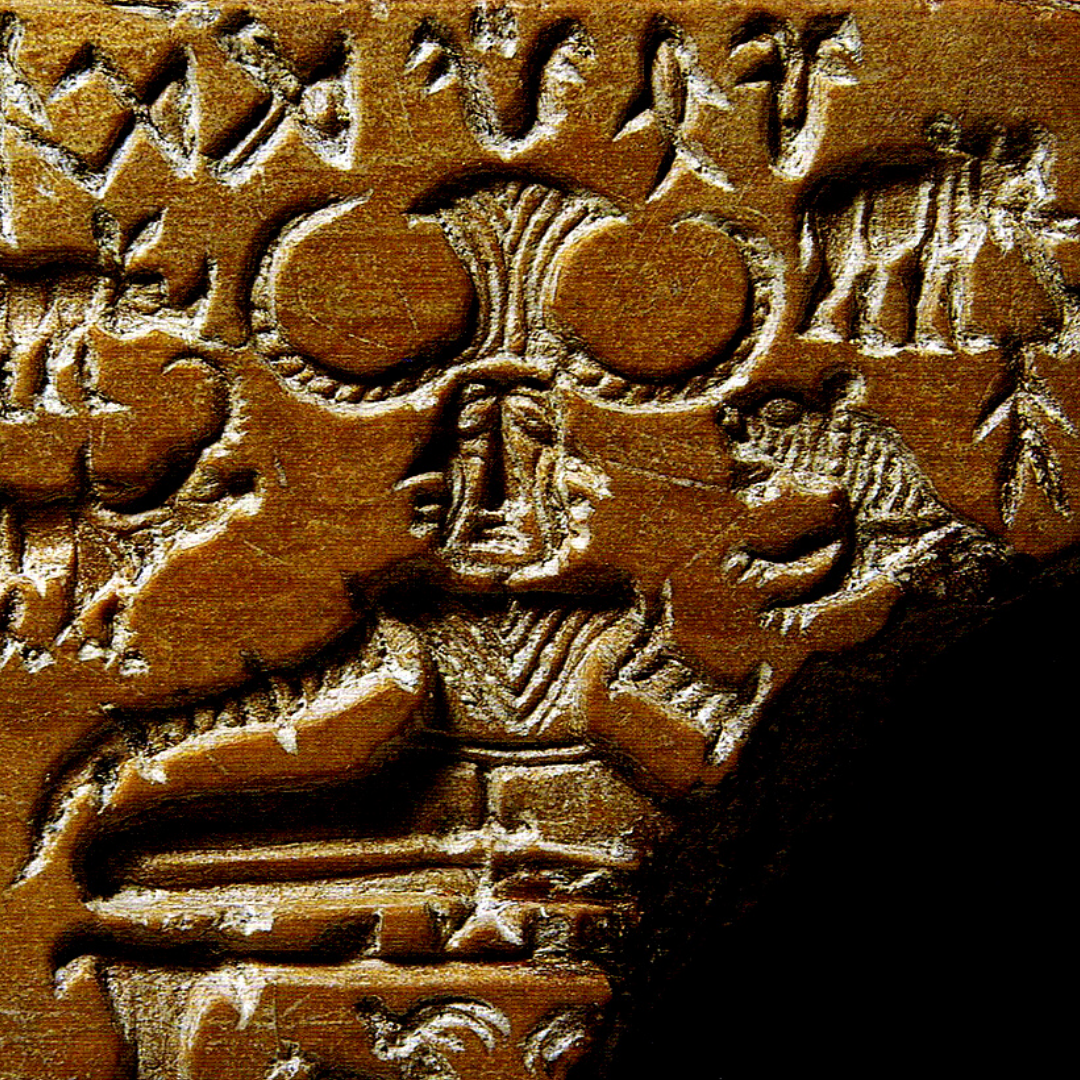 A farming culture in the steppes of Russia discovered the war chariot and started expanding in all directions, spreading westwards to Europe and eastwards to India, where they arrived around 1500 BC.

This migration has been traced by historians by studying the changes in language over time. Its turns out that languages as diverse as Indian sanskrit, Persian, Greek and English share a common root. For instance, the Indian word for demon is 'asura', which is related to the Avestan (Persian) word for god 'ahura'. The Indian word for god is 'deva', while the Avestan word for demon is 'daeva'. In this way, many words are linked.

Gods in this area are also similar. The strongest comparison is between Indra (from India), Zeus (from Greece) and Thor (from Scandinavia). All are warrior gods, that live in the sky and wield of the thunderbolt. They are also in king of the gods. 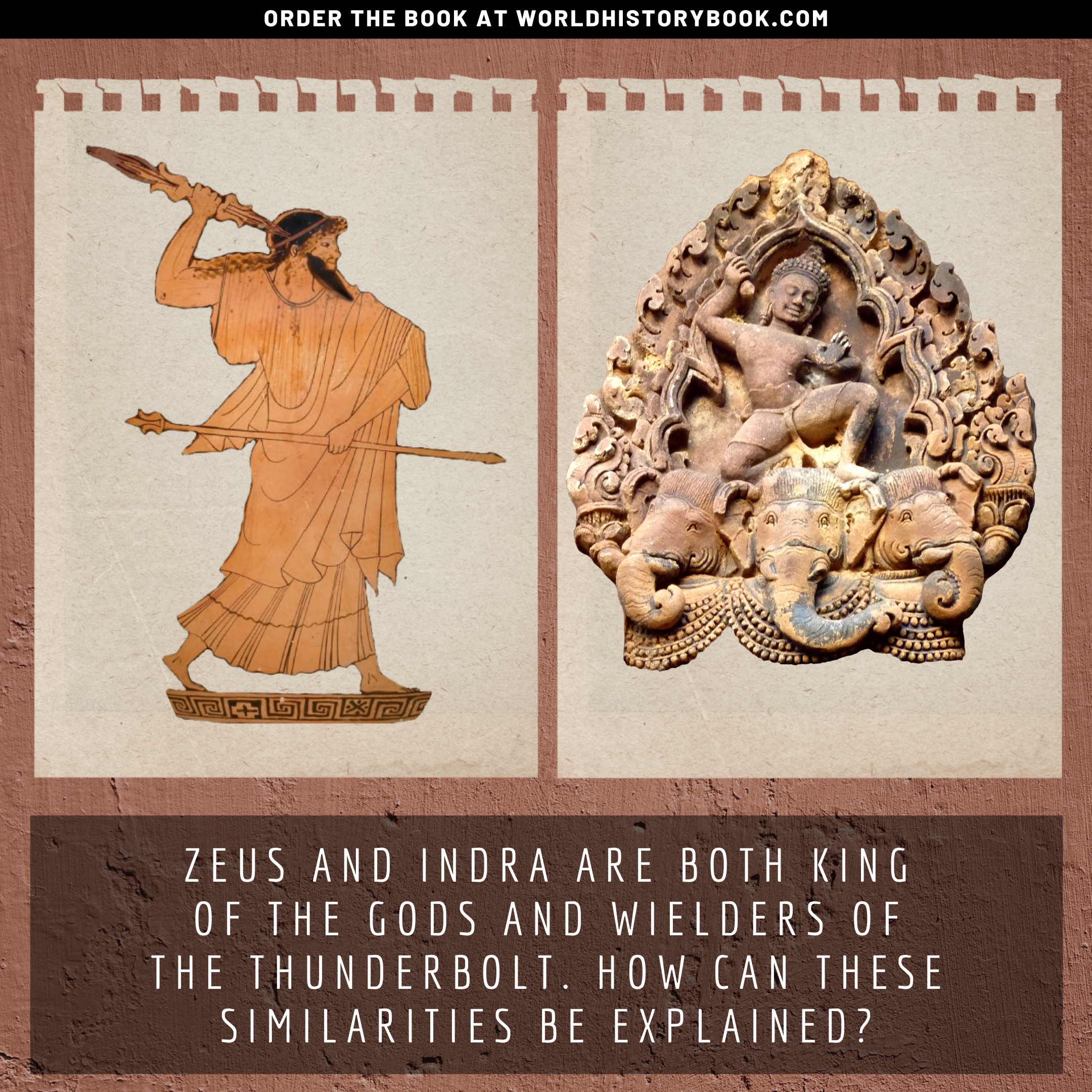 The Vedas are the oldest remaining texts of the Indo-European tradition. The oldest text is called the Rig-Veda and was composed about 1500 BC. This text contains over 1000 hymns in praise of various gods (deva), among them Indra, Agni, Soma and many others. Soma, by the way, was also the name of a hallucinatory drink made from a plant.

The words in the Veda's were considered absolutely authoritative and of supernatural origin. It was believed that they were not simply made up by their authors, but that they were heard (sruti) by seers (rishi). The syllables of the text, when spoken out loud, were considered sacred and powerful and sometimes even dangerous. In fact, only the brahmin (the priests), were allowed to speak them. They did so during rituals, which often contained altars, sacred fires and offerings of plants and animals to invoke the aid of the gods. 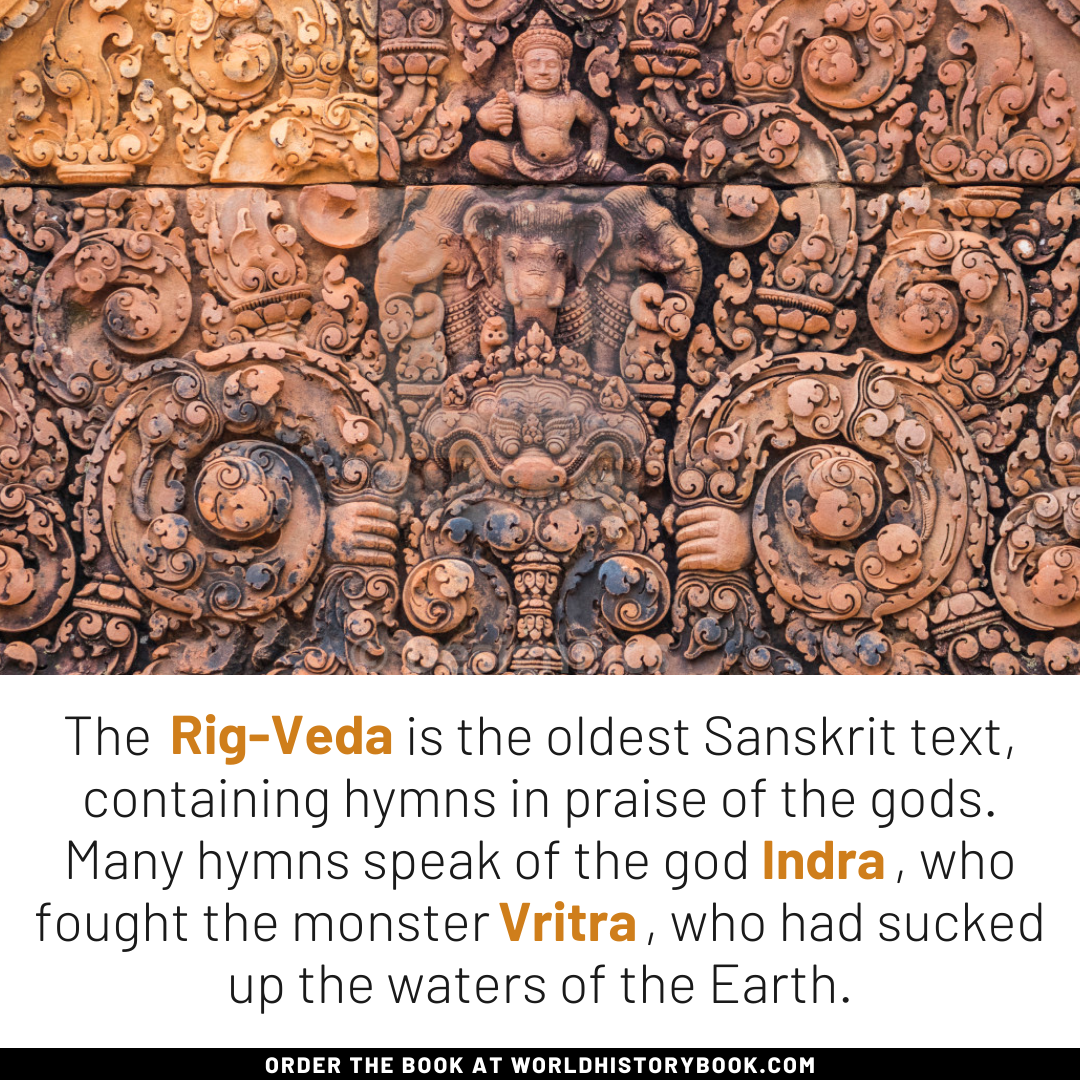 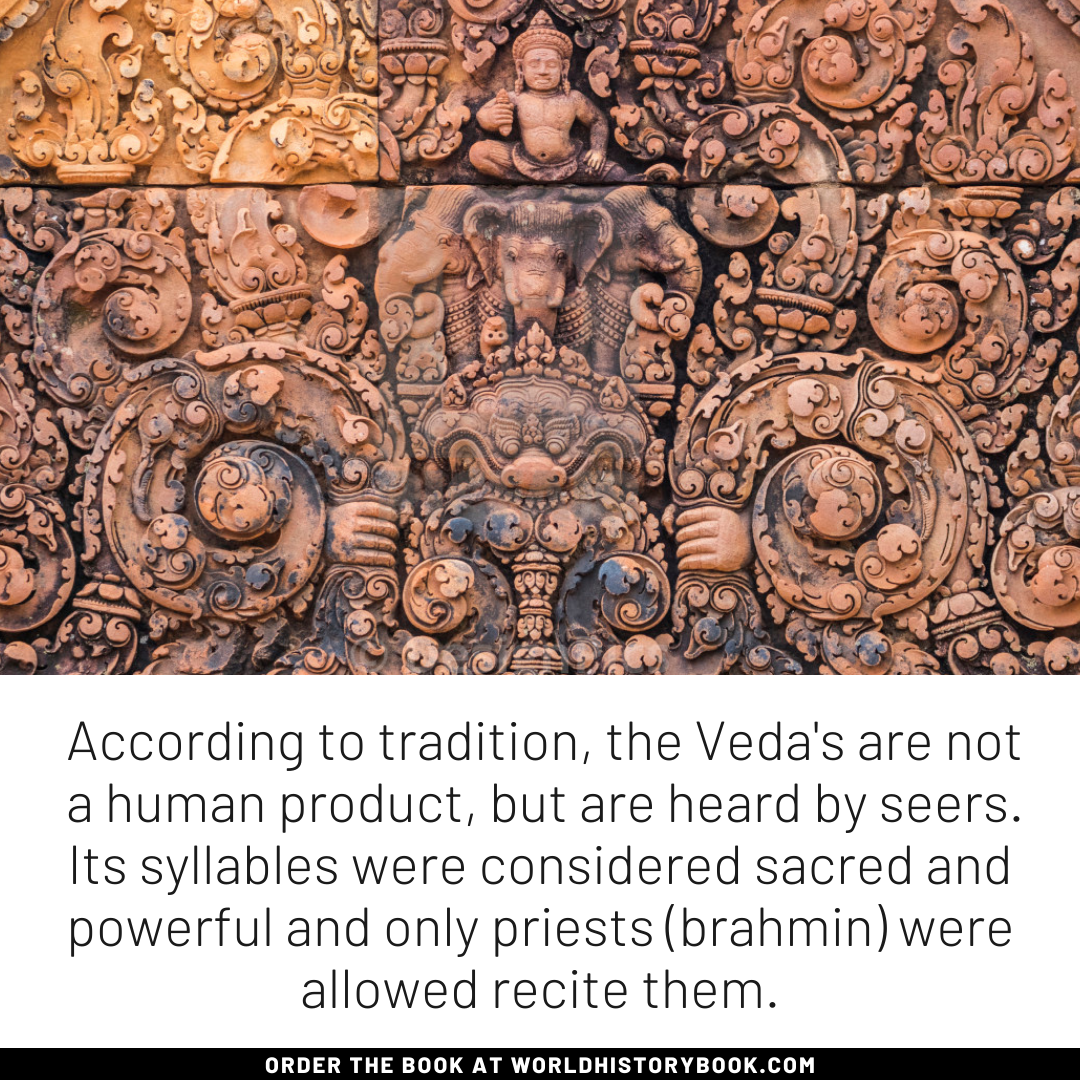 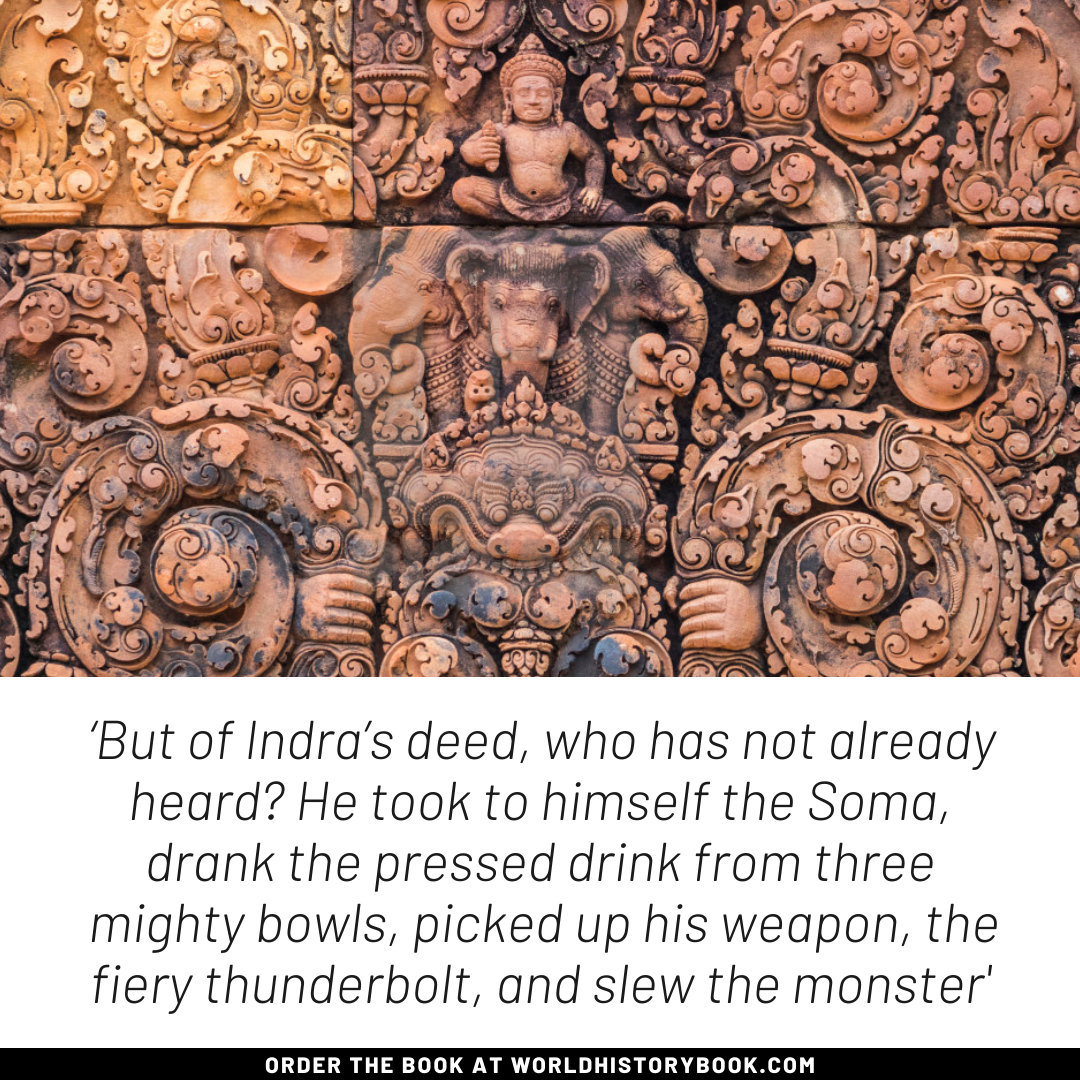 he Rig-Veda, dating to about 1500 BC, speaks of Brahman, the power inherent in the spoken syllables of the Veda. These syllables when spoken aloud were thought to contain great magical power.

As time went by, the word transformed into a more abstract concept, referring to the essence of the universe, the underlying realilty behind all phenomena that exist.

The seed of this idea, can already be found in the Rig-Veda itself. For instance, in the much-quoted line:

'They call it Indra, Mitra, Varuna, Agni, and it is the heavenly bird that flies. The wise speak of what is ONE in many ways; they call it Agni, Yama, Matarishvan.' 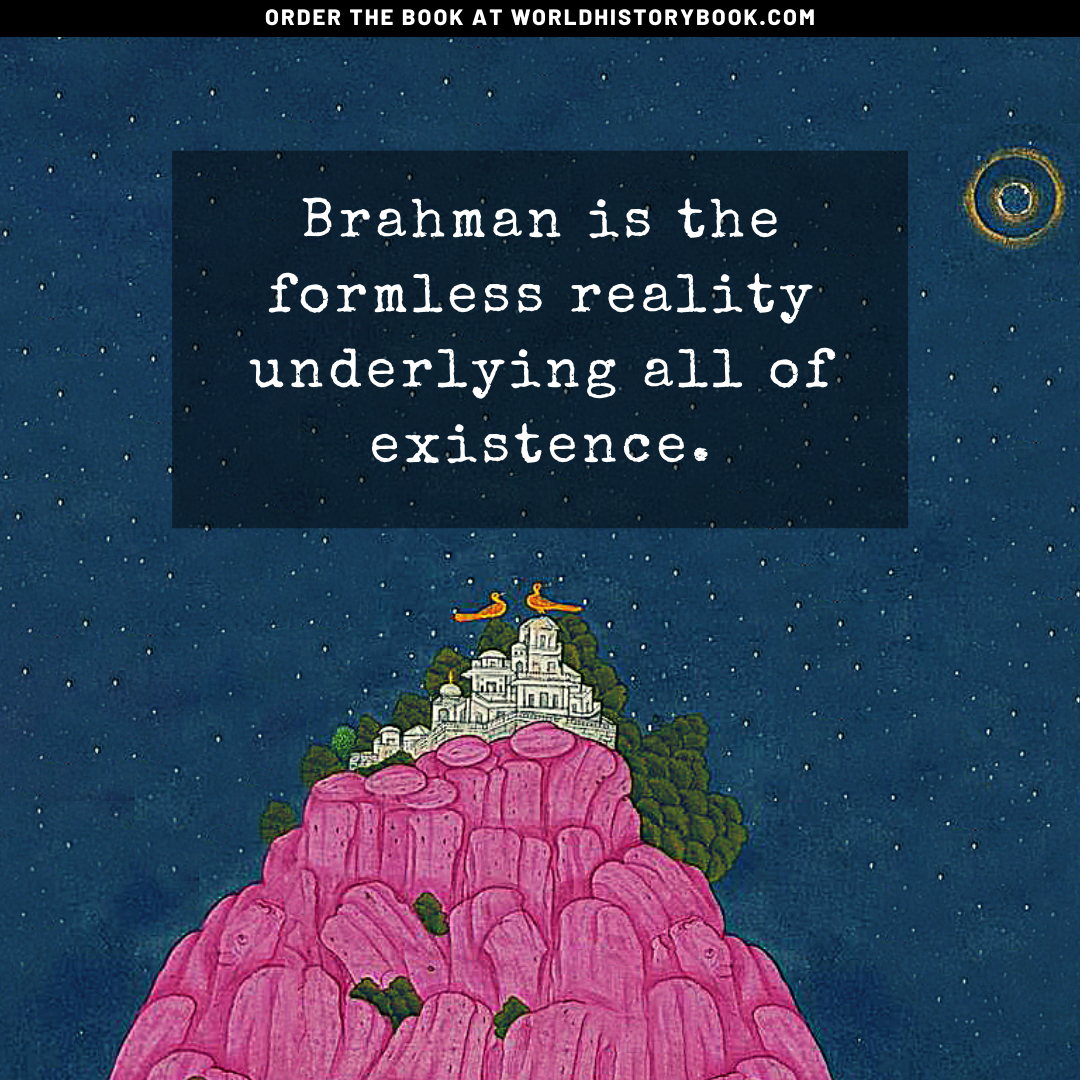 As time went on, the economy grew, allowing students some free time to move over long distances for philosophical and theological debate.

From about 700-600 BC, a number of Indian men stopped relying on communal rituals and instead depart to the forest in solitude, where they engaged in meditative practices to attain salvation.

They began to locate the solution to the problems of their day not in the society as a whole, but in the mind of the individual. These forest philosophers became the ideal of India's spiritual quest.

Since they often left their families, wealth and status and started to live in the wilderness, they are often called renouncers. Others, however, continued to be married and be part of a household, while some even became the personal philosophers of local kings.

Their teachings are collected in a series of texts called the Upanishads. The word 'upanishad' literally means 'to sit down beside', referring to the passing of wisdom from teacher to student. 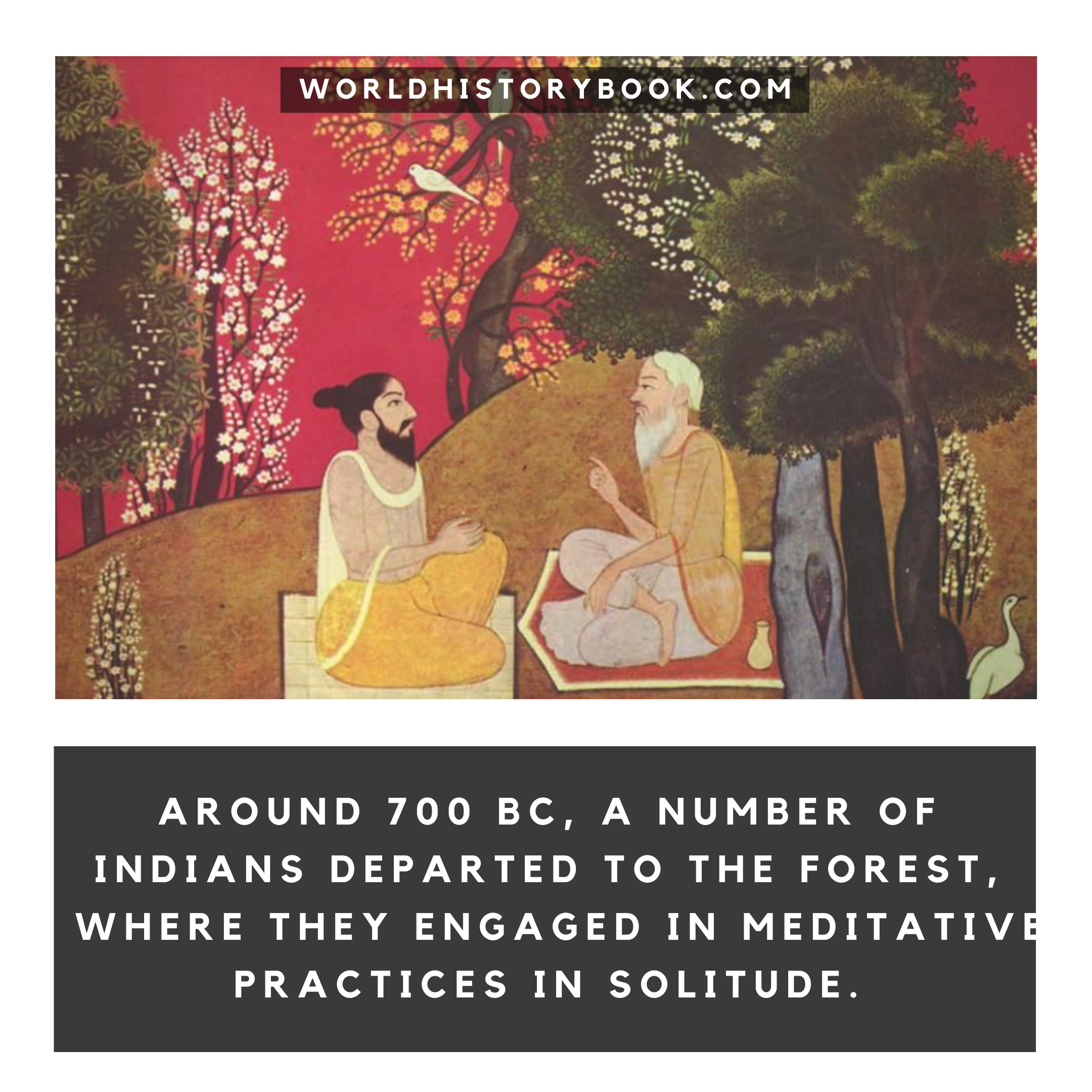 Diwali is a light festival in India that is celebrated at least well over a 1000 years.

In the early 15th century, the Venetian merchant and traveller Niccolo de Conti visited India and wrote about the festival:

"On another of these festivals they fix up within their temples, and on the outside of the roofs, an innumerable number of oil lamps."

The lights symbolize the triumph of light over darkness, good over evil.

Tradition links the festival to the great Indian epic the Ramayana (dating perhaps between 700-400 BC), although other religious groups have come to celebrate the festival for different reasons. In the Ramayana, diwali marks the day that Rama returned to the city Ayodhya after a period of exile and defeated the army of the demon king Ravana.

I wish everyone a happy Diwali.

Finally my favorite quote from Hinduism! The upanishads teach that the source of the universe (brahman) is equal to the source of ourselves (atman). This point was beautifully made by the sage Uddalaka teaching his son Svetaketu. We read:

'AUM! There was Svetaketu Aruneya, and his father said to him, 'Svetaketu, go live as a seeker of Brahman! Verily, dear boy, in our family there is no one without learning.' Having become a pupil at 12 and having studied all the Vedas, he returned at twentyfour, proud, conceited, thinking himself well-schooled.

Then his father said to him: 'Svetaketu, since you are proud and conceited, dear boy, and consider yourself learned, did you ask for that instruction by which that which is not heard, becomes heard, not thought, becomes thought, and not known becomes known?' 'But in what manner, sir, is this teaching?' 'Just as from a single lump of clay, dear boy, one would know about everything made from clay, the difference being a mere verbal distinction, a name, the reality is only clay.'

'Indeed, those worthy men did not know this, for if they had known it why did they not tell me? Sir, please tell it to me.' 'Certainly, dear boy,' he replied. 'So be it,' said the father and he said, 'Bring me a fruit of the nyagrodha tree.' 'Here it is, sir.' 'Break it.' 'It is broken, sir.' 'What do you see there?' 'Some seeds, sir, exceedingly small.' 'Break one of these.' 'It is broken, sir.' 'What do you see there?' 'Nothing at all.' The father said, 'My son, that subtle essence which you do not perceive there - in that very essence stands the being of the huge nyagrodha tree. In that which is the subtle essence, all that exists has its self. That is the True, that is the Self, and thou Svetaketu art That.'

Thanks for reading till the end of the post!

Alexander the Great in India

A clue about the exceptional control the yogis had over body and mind comes from biographies on Alexander the Great (356-323 BC), who invaded India in the 4th century BC. His men found fifteen naked monks sitting motionless on sunbaked rocks so hot that no one of the Macedonian soldiers could step on it without shoes. The soldier in charge asked the monks to share some of their wisdom. They responded by saying that no one wearing their elaborate clothing could be taught philosophy. They should first be naked and learn to sit peacefully on broiling rock. Another of the group of monks was willing to meet Alexander. One of them asked for a great pyre to be built. The monk mounted the pyre, assumed the cross-legged seated posture and set himself on fire. While flames wrapped around him, he continued to sit motionless, until his body had turned to ashes. 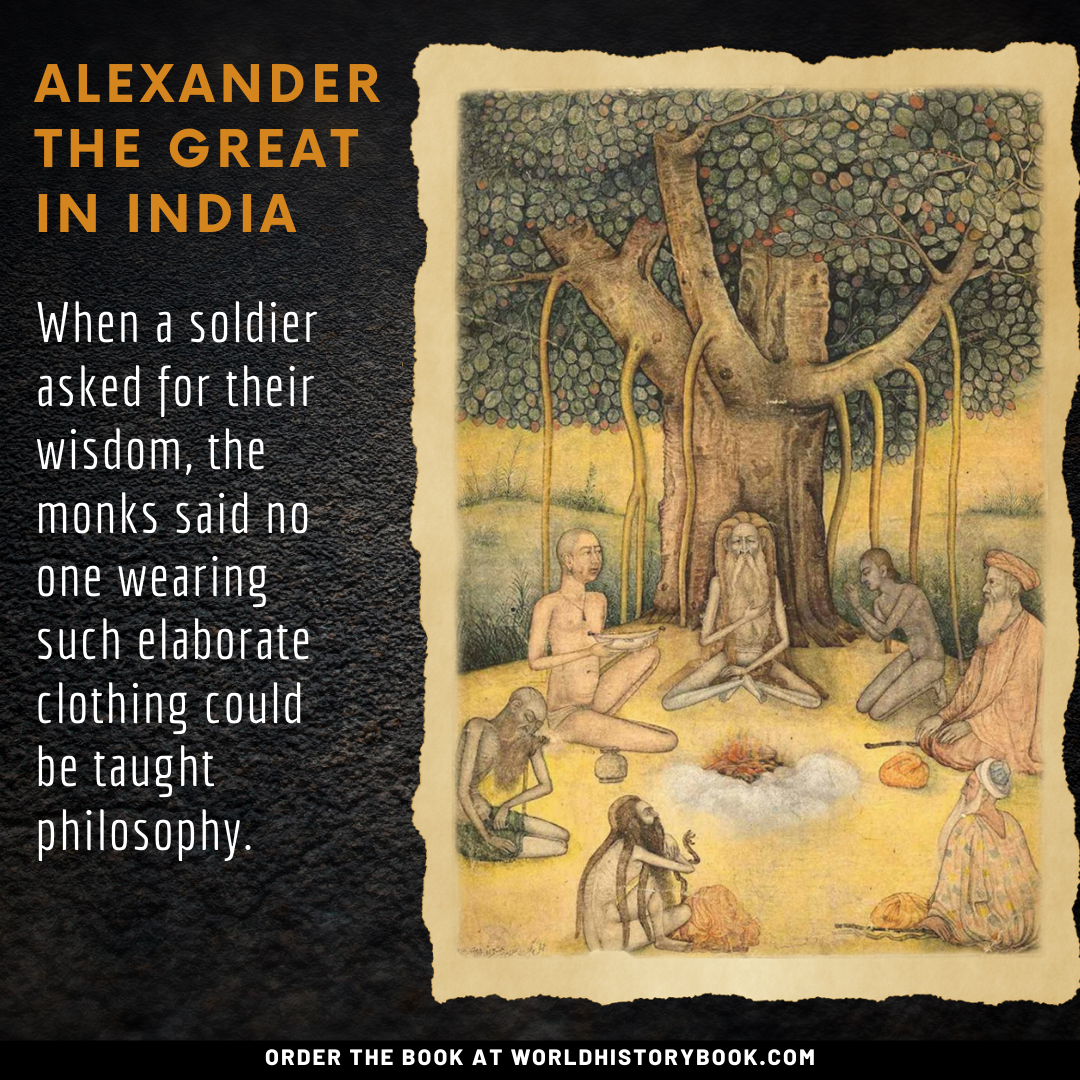 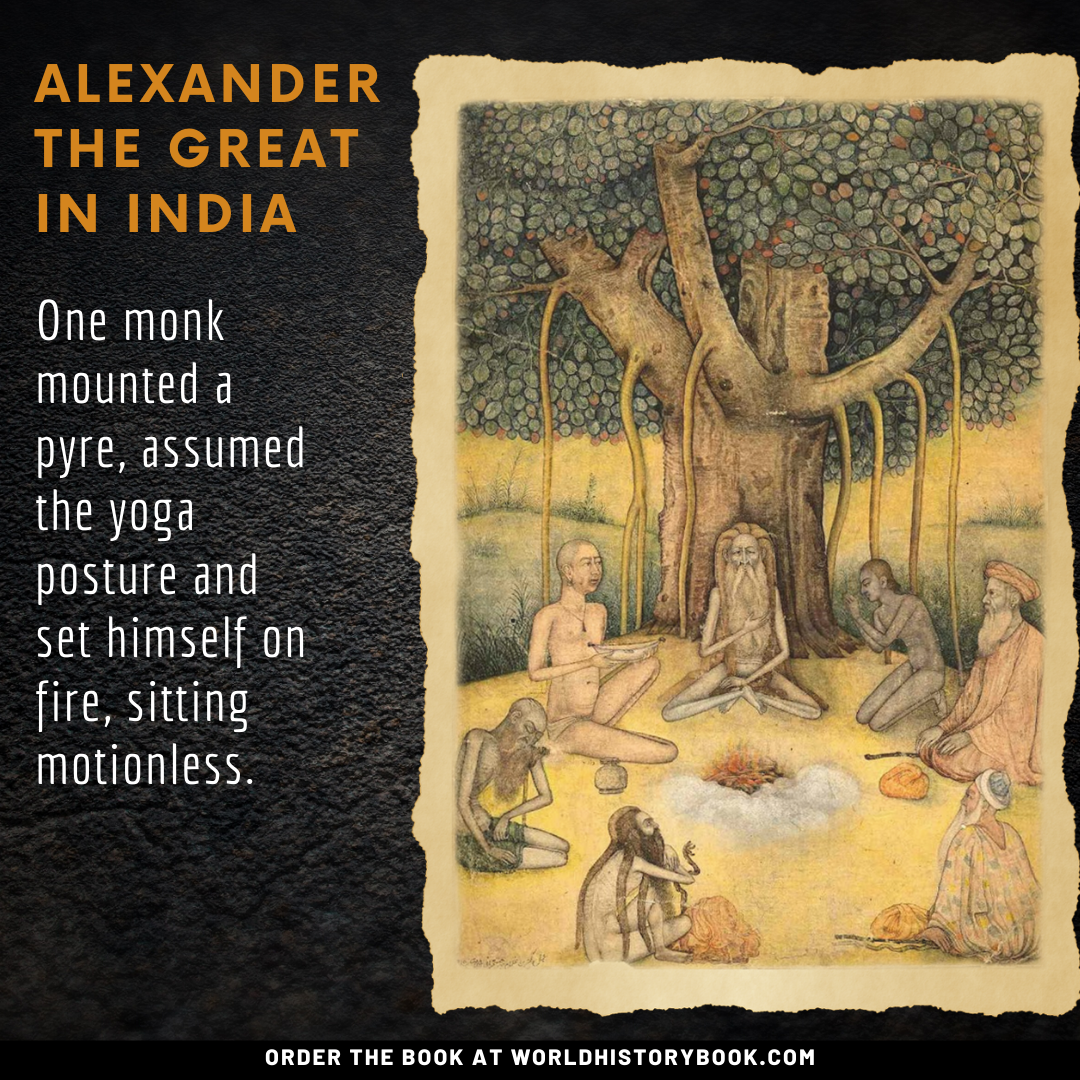