The main complaints against Philip were his attempts to tighten his control over Dutch territory and his relentless persecution of Protestants. In response, 200 Dutch noblemen signed a petition in 1566, asking for more religious tolerance—which remained a staple of Dutch culture.

Militarily, the Dutch initially only had moderate success, but this changed in 1571 when the watergeuzen ("sea-beggars")—a group of fugitive Protestant nobles at sea, who had joined forces with bandits and adventurers, took Den Briel and later various other cities.

In 1581, the Staten-General, the Dutch assembly, felt confident enough to sign the Act of Abjuration ("Plakkaat van Verlatinghe")—the Dutch declaration of independence—in which they claimed Philip had forfeited his right to rule by acting like a tyrant. 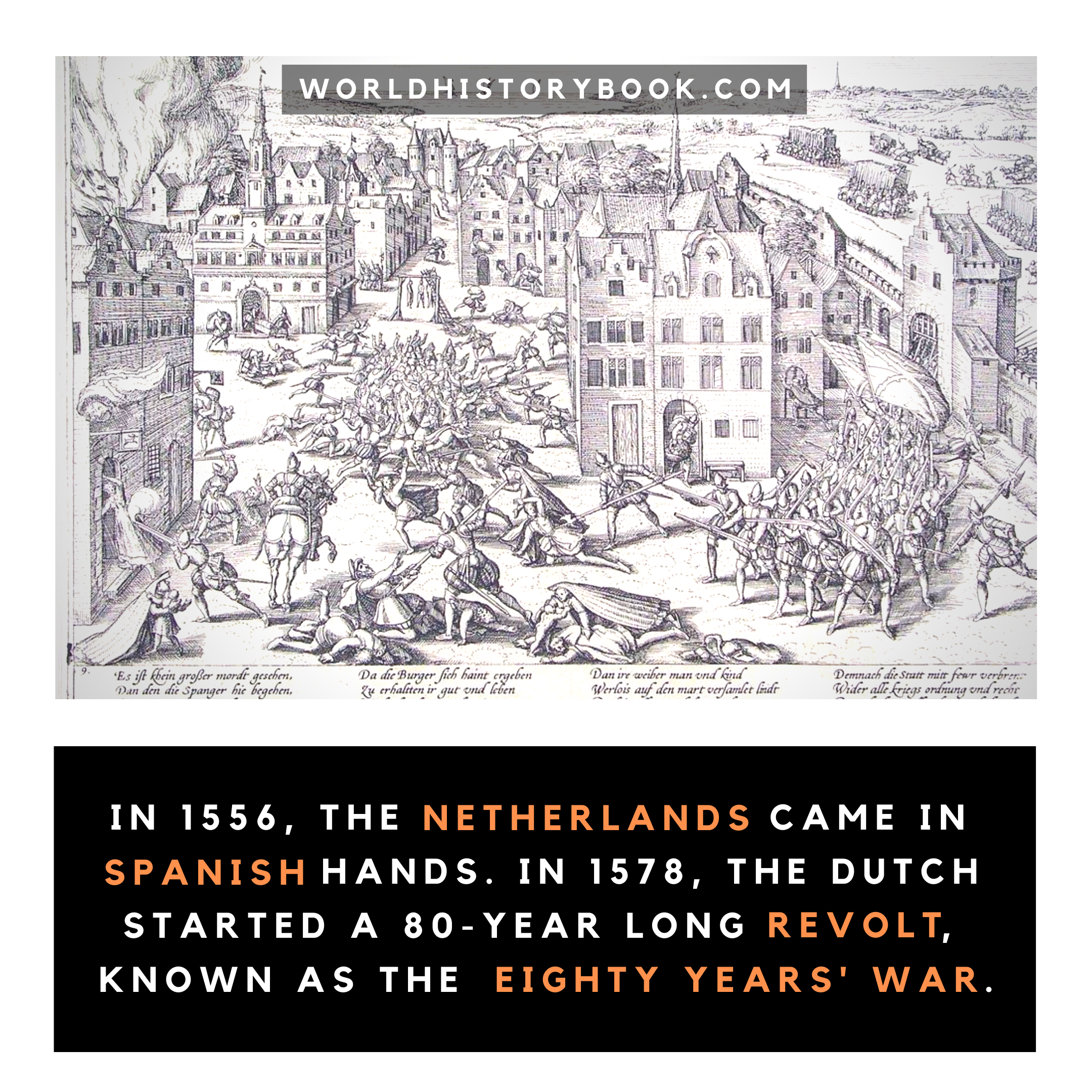 In 1588, the 130 ships of the supposedly "invincible" Spanish Armada sailed out to invade England. King Philip II of Spain had ordered the fleet to meet up in Flanders, were the Duke of Parma awaited them with an army to be used for the invasion.

But then, Dutch boats blockaded the harbours, making it impossible for the armada to reach the army. In the meantime, the armada was gravely damaged by the English fleet, causing them to flee. The winds forced them to take the long route back around Scotland and Ireland, where the fleet was further damaged by a storm and various ships were wrecked on the coastline.

In the end, more than 30% of the ships failed to return home. 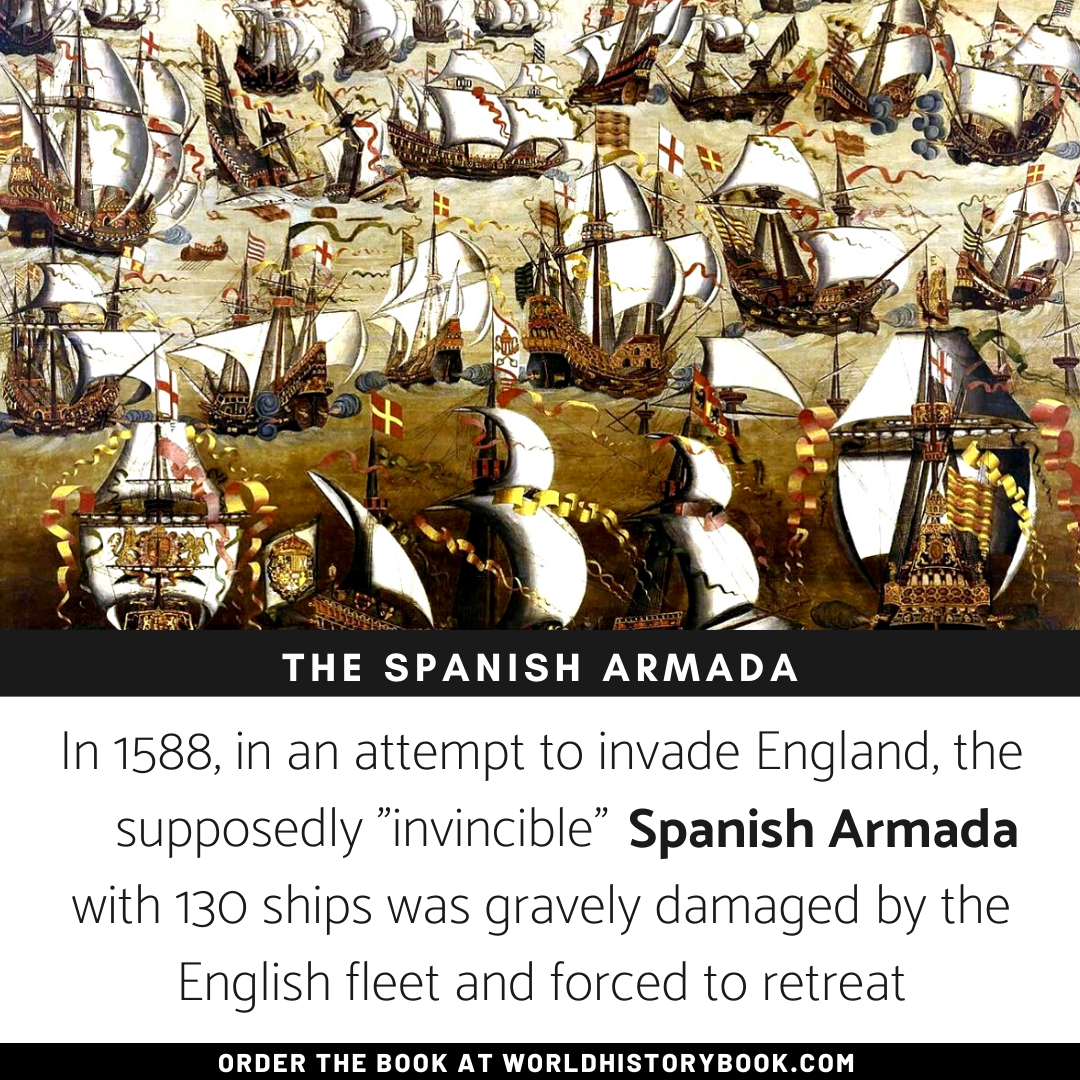 The Capture of the Silver Fleet

In the past, the Dutch venerated their greatest captains as heroes. One of their most spectacular achievements occured in 1628, when Admiral Piet Hein sailed to Caribbean to capture a Spanish treasure fleet, which was transporting huge amounts of silver and gold from the Spanish colonies back to Spain. Piet Hein managed to take over the fleet without bloodshed. The booty allowed the Dutch to fund their army, while weakening their Spanish enemy.

On his return, Piet Hein remarked:

"Now they praise me because I gained riches without the least danger; but earlier when I risked my life in full combat they didn't even know I existed." 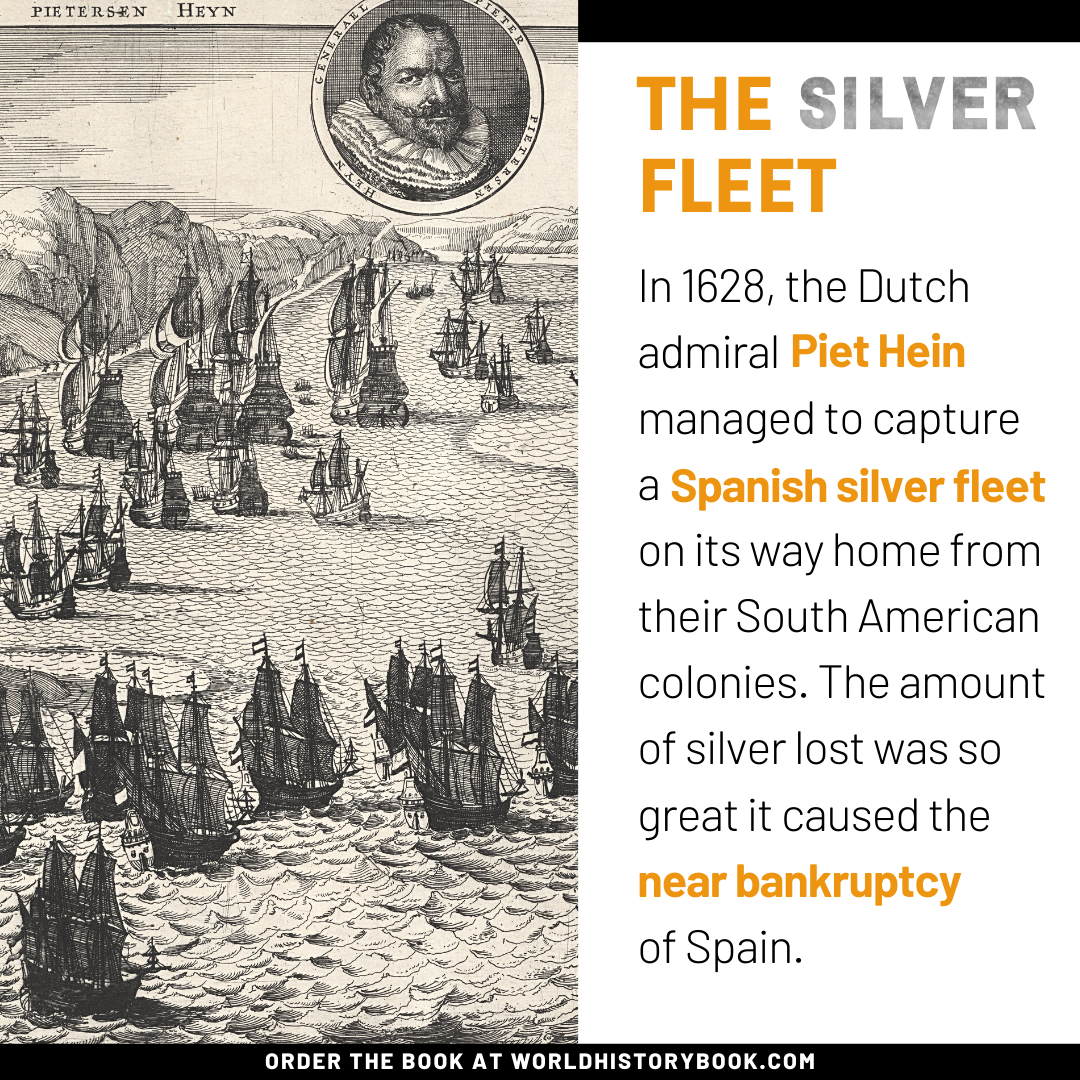 In the 17th century, the Netherlands—a tiny country in Western Europe—became the most commercial country in the world. With the full force of capitalism, examplified by their new stock exchange in Amsterdam (see the next post), businessmen pooled money together to create a fleet which made them the most powerful country on Earth—both in terms of military might and finance. 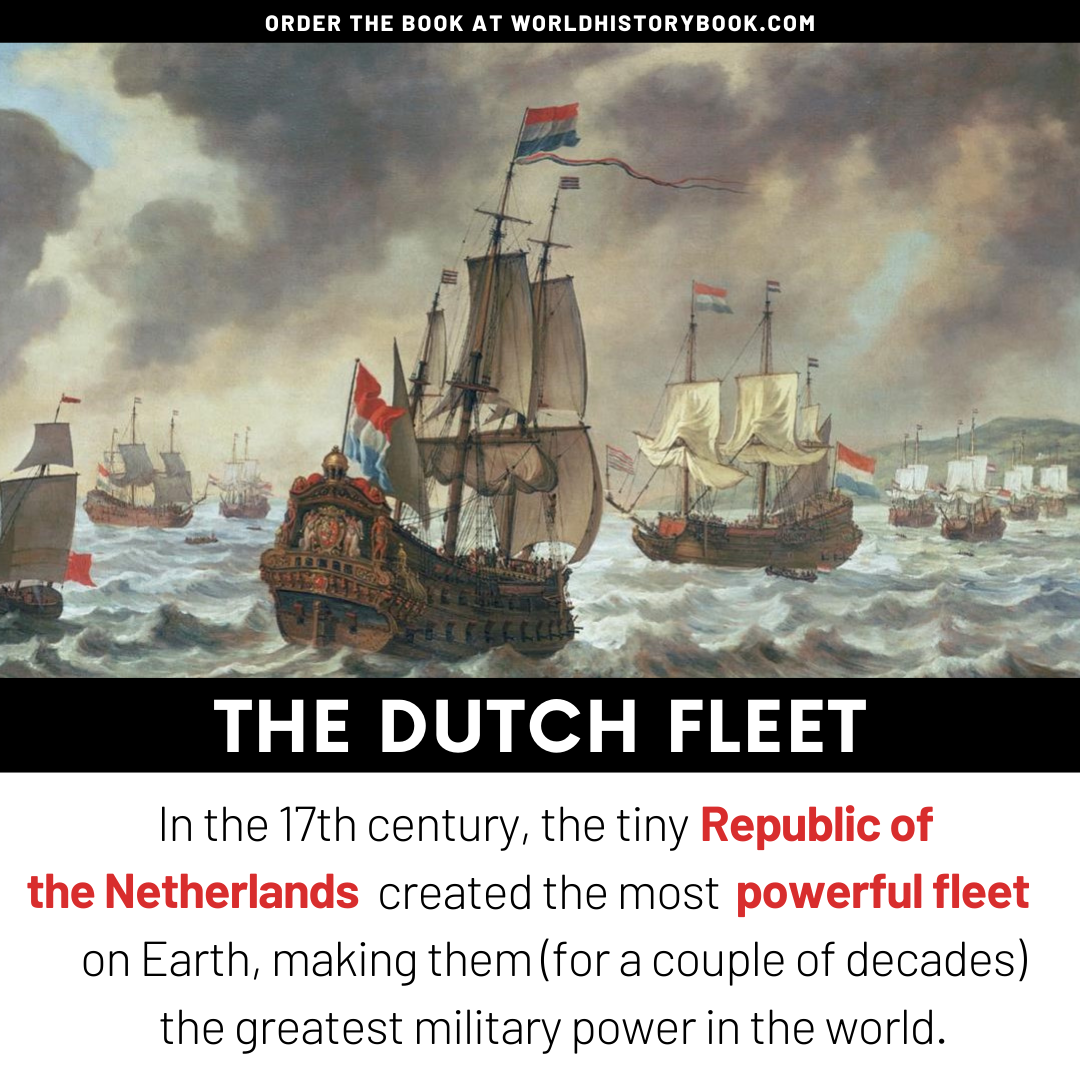 In the 17th century, the Netherlands—a tiny republic in Western Europe—became the most commercial country in the world. This was examplified by the Stock Exchange of Amsterdam, founded in 1611. The exchange allowed businessmen to buy stocks of various companies, allowing these companies to finance expensive projects, including their massive fleet (see the previous post).

Although shareholder companies had existed in earlier times (at least as far back as Ancient Rome), the Amsterdam Stock Exchange is generally regarded as the world's first proper stock exchange.

In 1602, the leading Dutch statesman Johan van Oldenbarnevelt (1547-1619) initiated the fusion of several Dutch trading companies into a megacorporation known as the Dutch East India Company (abbreviated in Dutch as VOC)—the first company in history to issue bonds and shares of stock to the general public.

Suggestive of their enormous wealth, the Dutch investments into the VOC have been estimated to outdo their main competitor—the English East India Company—by a factor of ten.

The Dutch government gave the VOC permission to wage war and settle colonies on their behalf. They managed to expel the Portuguese from Spice Island (now called the Moluccas), created plantations to cultivate sugar, tea, coffee, and tobacco in the East Indies (Indonesia), and established colonies in South-Africa and Sri Lanka. They even gained a monopoly on trade with Japan.

Although a remarkable logistical achievement, the imperial ambitions of the Netherlands were also accompanied by lots of violence and oppression (see the next post). 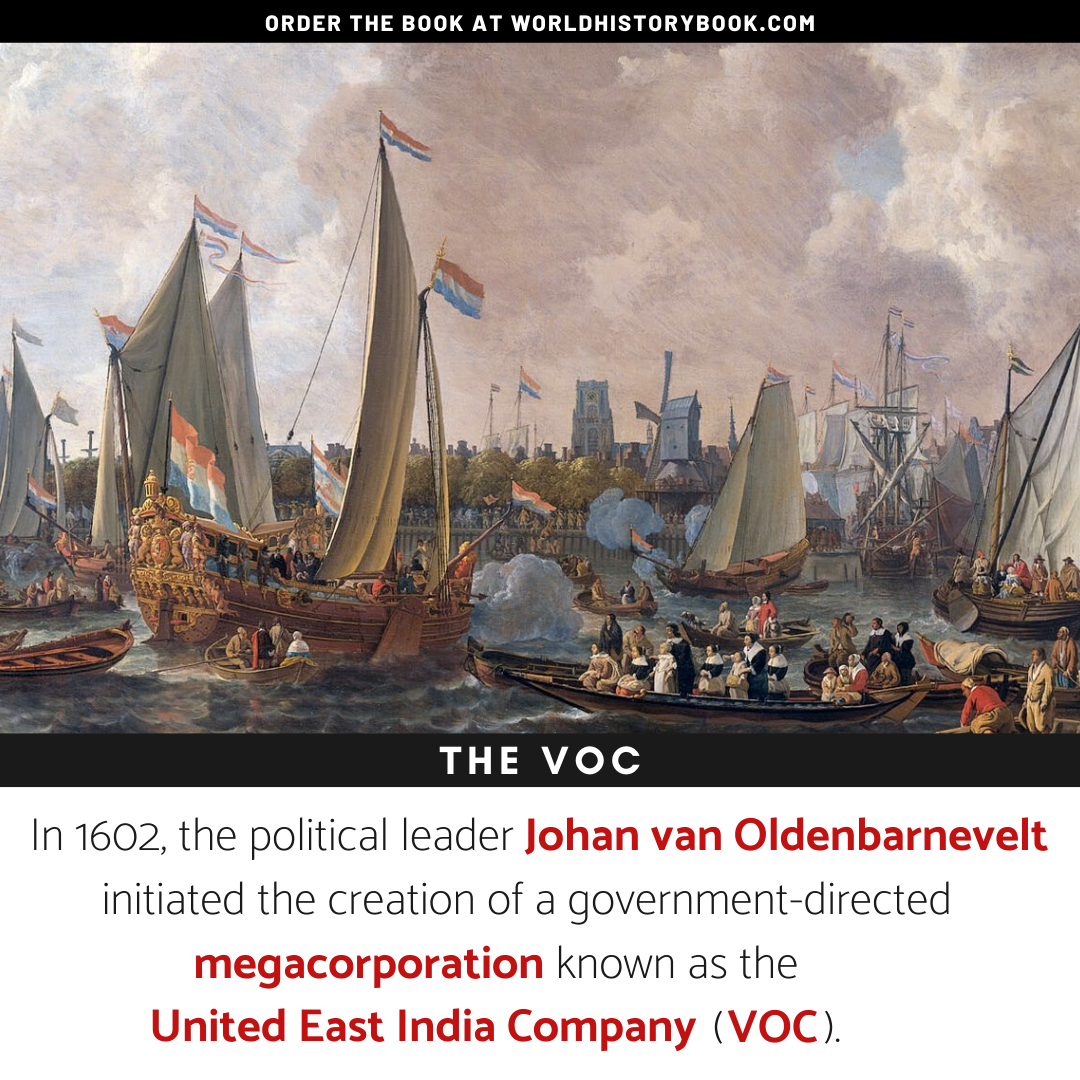 In 1621, the Dutch West India Company (WIC) was founded, which colonized Suriname and the Antilles and gained the Dutch monopoly on the slave trade.

The Dutch were responsible for about 5% of the Transatlantic Slave Trade, which is a considerable amount given the small size of the country. The slaves were picked up along the African coast and then shipped to America in barbaric conditions. An estimated 5% of the Dutch economy ran on slave labor. More details follow in the next post.

The Dutch also participated in the Triangular Trade across the Atlantic Ocean from Europe to Africa, then to America and then back home.

Making use of the direction of the winds, Europeans first sailed to the West-African coast, where they sold firearms, gun powder, iron, and textile in exchange for slaves. As the Europeans only controlled the coastal area, they relied on local African rulers to bring the slaves to their ships. The slaves were then shipped to America under horrible conditions (in an earlier post about Equiano, I describe these conditions). Once in America, the slaves were sold as plantation workers in exchange for luxury products such as suger, rum, coffee, cotton, silver and tabacco, which were brought back home to Europe.

The fort depicted in the image is sitauted in Ghana. Here, Europeans bought the slaves. 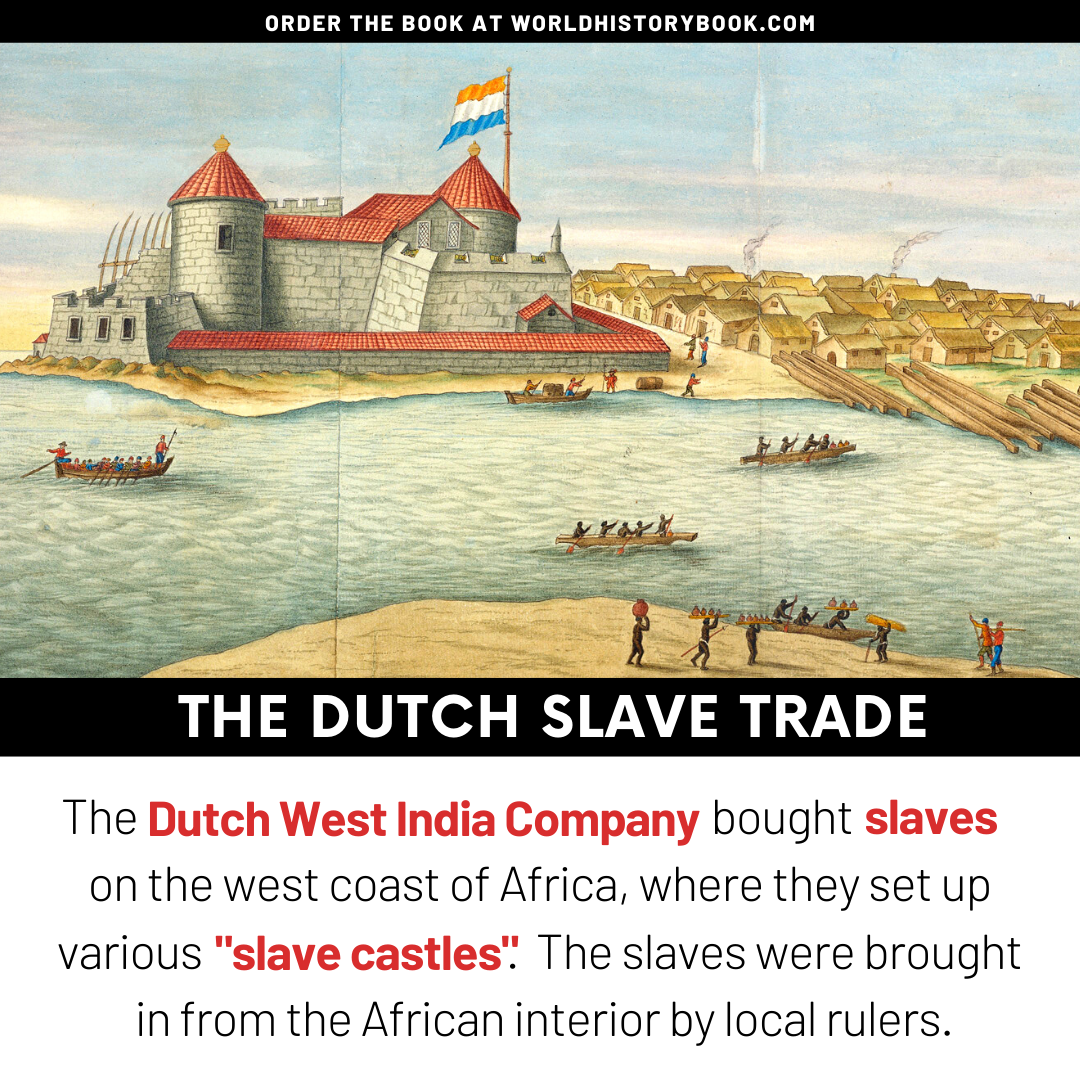 In 1609, the VOC hired the British explorer Henry Hudson. He reached the North American coast, where he sailed up what is now called the Hudson River, hoping it might be a passage to the Pacific Ocean. When he discovered this was not the case, he gave up and went back home. In the following years, the Dutch began to colonize the area, calling it New Amsterdam.

In 1664, a treaty was signed to end one of the conflicts between England and the Netherlands. It put New Amsterdam in the hands of the English, which they renamed New York, while the Dutch gained control over Surinam in South America, with its valuable sugar plantations.

In 1612, merchants and politicians from Amsterdam set out to expand Dutch territory by "creating" new land by draining a large lake known as the Beemster. To do this, they first had to build a strong 38-kilometer long dam around the lake, after which engineer Jan Leeghwater (1575-1650) placed 43 windmills to pump out the water. This method was repeated many times over the centuries. 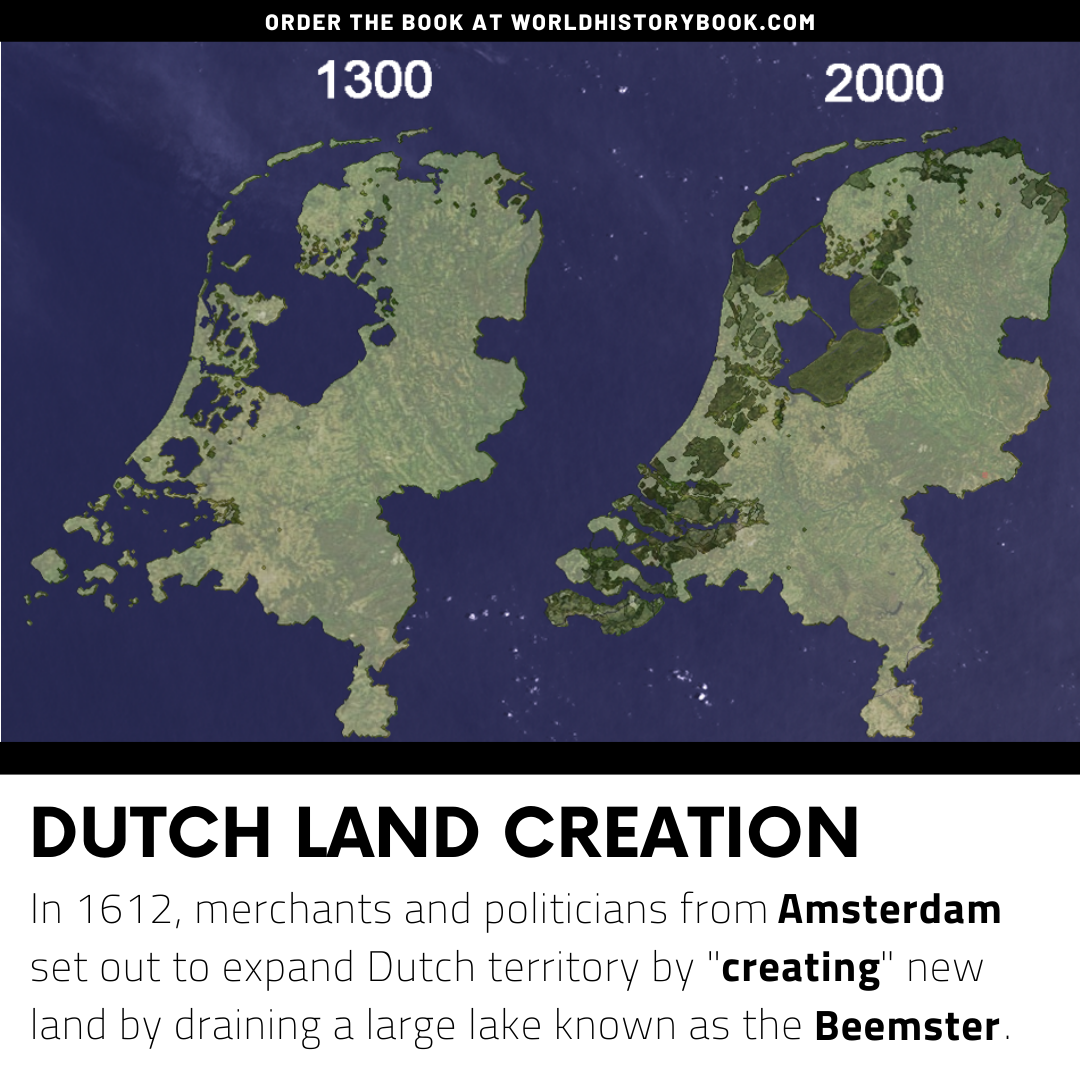 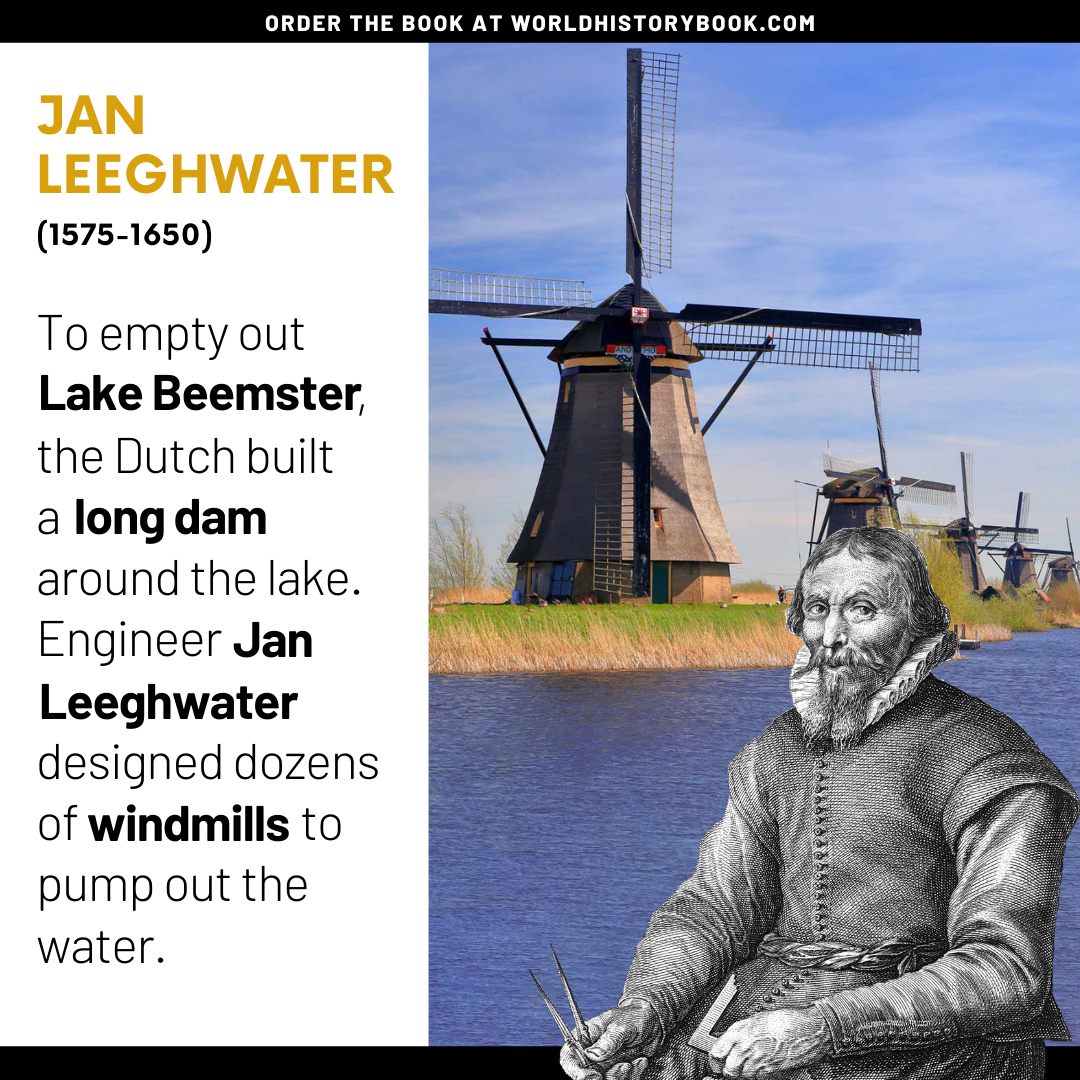