THE TEACHINGS OF CONFUCIUS

The most influential philosopher in Chinese history was Confucius (551-479 BC). The name Confucius is actually a westernized version of "Kong Fuzi," meaning "Master Kong." Confucius was born in the state called Lu as part of the shi-class, just a notch higher than the common folk. When his father died soon after his birth, he was raised in poverty by his mother. Although starting out in this lowly position, he slowly worked himself up, first becoming a keeper of granaries and livestock, then a district officer, then minister of works, and finally minister of crime. Because of his background, he retained a strong connection with the lower classes, taking on both rich and poor students (and even the sons of criminals). 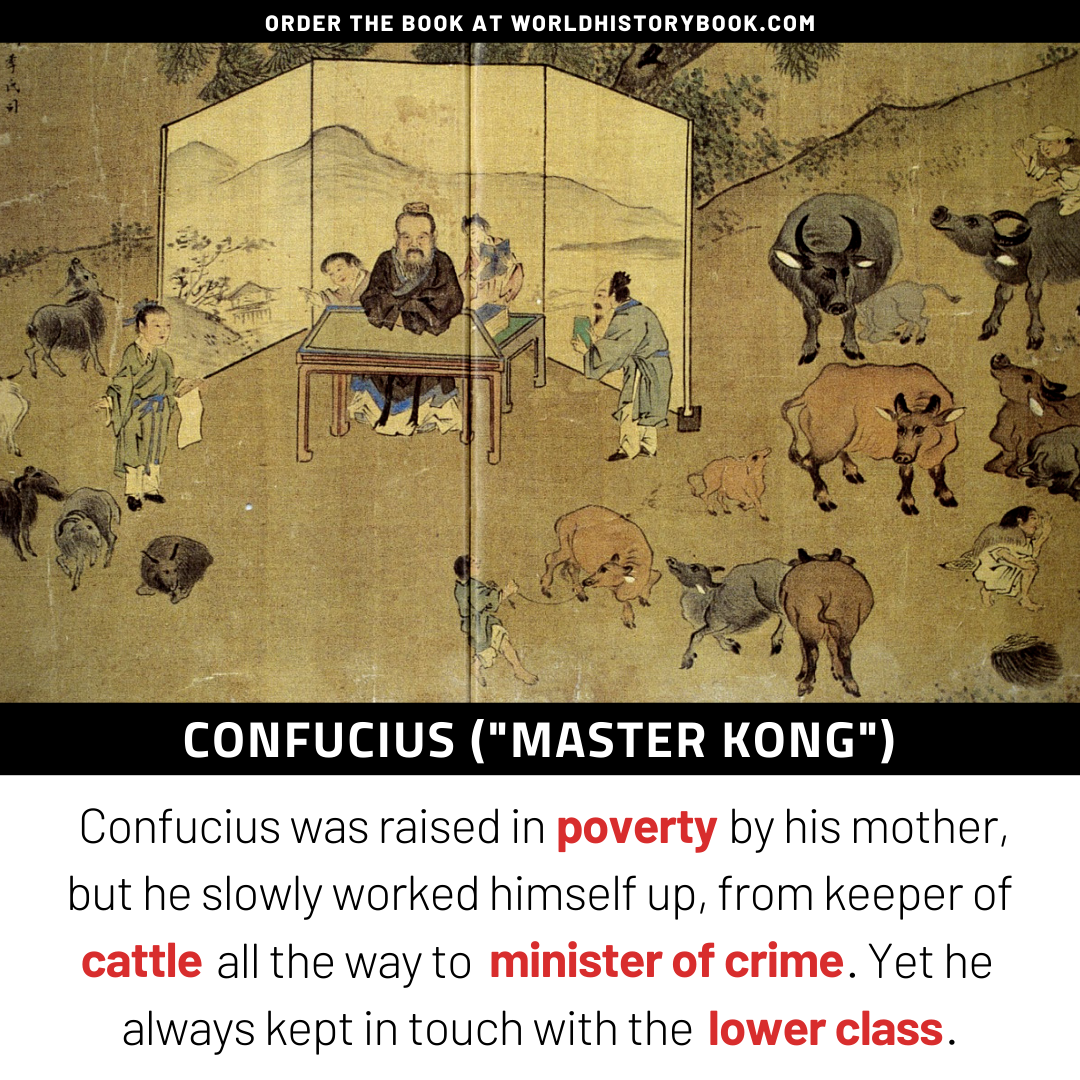 Confucius left Lu and started wandering from state to state for 10 to 12 years with a group of disciples, hoping any leader would listen to his teachings and implement his ideas about virtuous government. Unfortunately, his search was in vain. At the age of 68, Confucius was finally invited back to his home state by the chief minister of Lu. There he finally got some of the respect he had been looking for several government officials treated him as an "elder statesman" and approached him for advice on various occasions. The number of his disciples also grew to about 70. 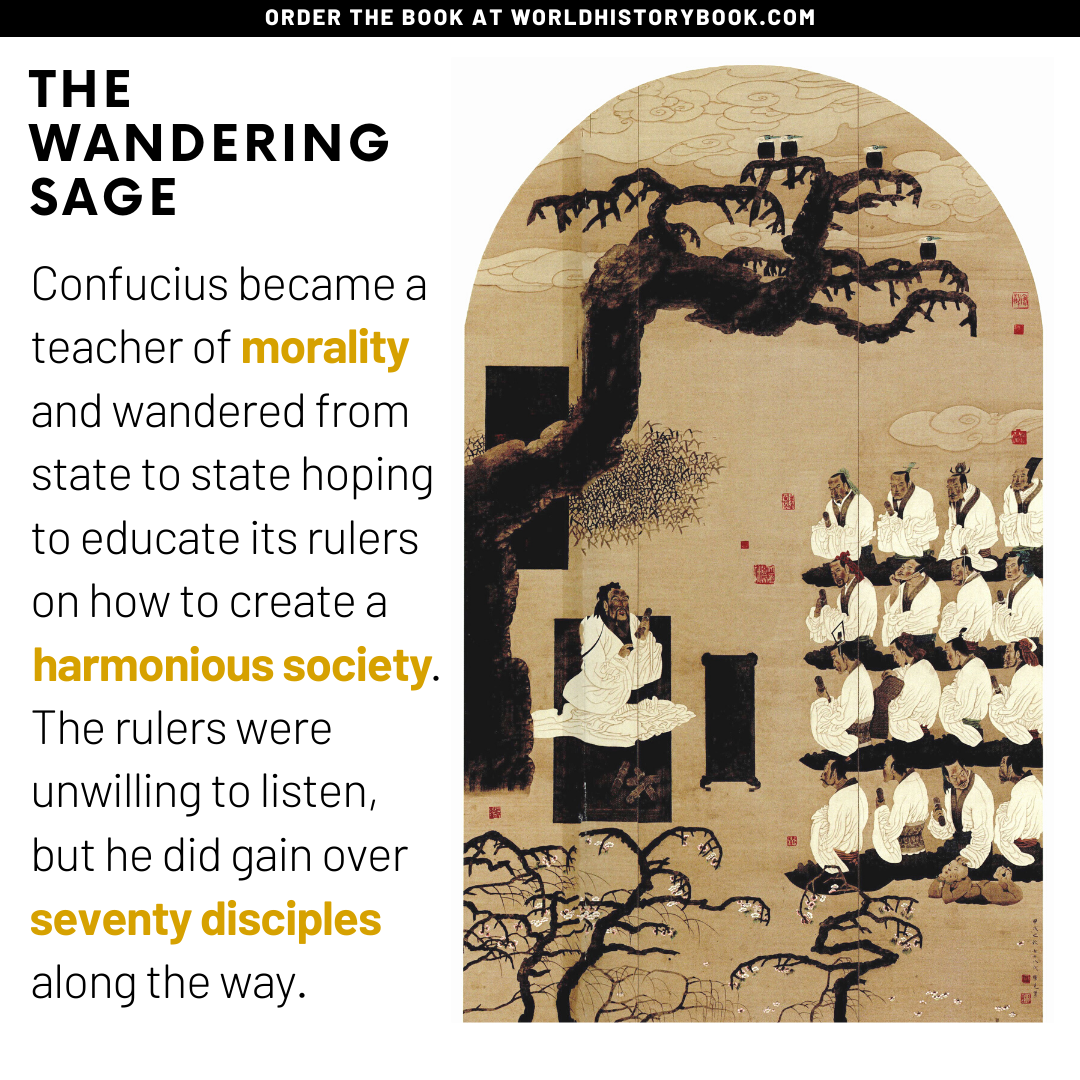 The Love of Learning

Confucius spent his whole life learning and putting what he had learned into practice to make the world a better place. The opening line of the Analects reads:

The Master said, "Is it not a pleasure to learn and, when it is timely, to practice what you have learned?"

In particular, interactions with others were a great opportunity to learn:

Confucius realized that an effective learner should not be afraid to make mistakes and should be open-minded about constructive criticism. Giving a good example, he encouraged his students to call him out whenever he was wrong:

"I have been fortunate. If I make a mistake, others will be sure to let me know."

He even called out students who accepted his teachings without any critical thought. We read:

The Master said, "Yan Hui is no help to me. He is pleased with everything I say."

The greatest of these virtues is ren. Ren literally means "two-man," signifying kindness between people. Ren is about being courteous, respectful, and loyal. Confucius wrote:

On another occasion, he said:

The master said, "Unwavering [in integrity], resolute [in one's moral conviction], simple as wood and hesitant to speak—these qualities come close to being ren."

"When encountering matters that involve ren, do not yield even to your teacher."

In describing this way of life, Confucius taught one of the first formulations of the golden rule:

Zhonggong asked about ren. The Master said, "When abroad, conduct yourself as if you were receiving an honored guest. When employing the people in your state, deport yourself as if you have been put in charge of a grand sacrifice. Do not impose on others what you do not desire for yourself. In this way, you will not incur any resentment whether your work is in the state or in a hereditary family."

Just like Jesus, Confucius concluded that the golden rule was the most important principle in life:

Zigong asked, "Is there a single word that can serve as the guide to conduct throughout life?" The Master said, "It is perhaps the word "shu." Do not impose on others what you yourself do not want others to impose on you." 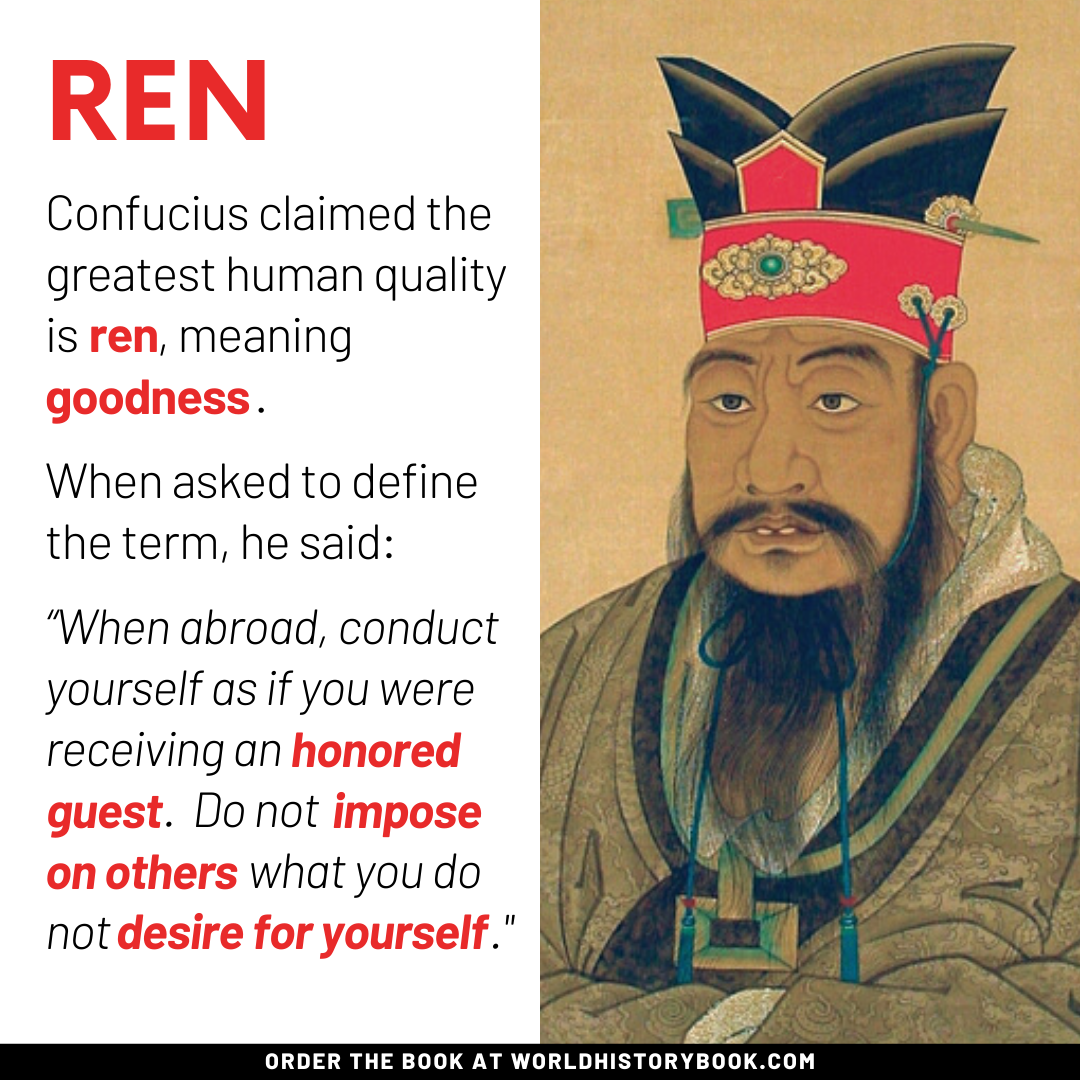 Confucius was primarily a man of this world. He enjoyed wine and good food. He also had no visions, did not meditate, did not claim to have any esoteric knowledge, and avoided postulating abstract metaphysical theories. A disciple wrote:

The Master stayed away from four things. He did not put forth theories or conjectures; he did not think that he must be right; he would not stubbornly refuse to change his opinion; he was not self-centered.

For instance, Confucius preferred not to speak of heaven. One of his students commented:

"We are allowed to hear Master's view on culture and goodness, but about the way of heaven, he will not tell us anything."

Or, in his own words: 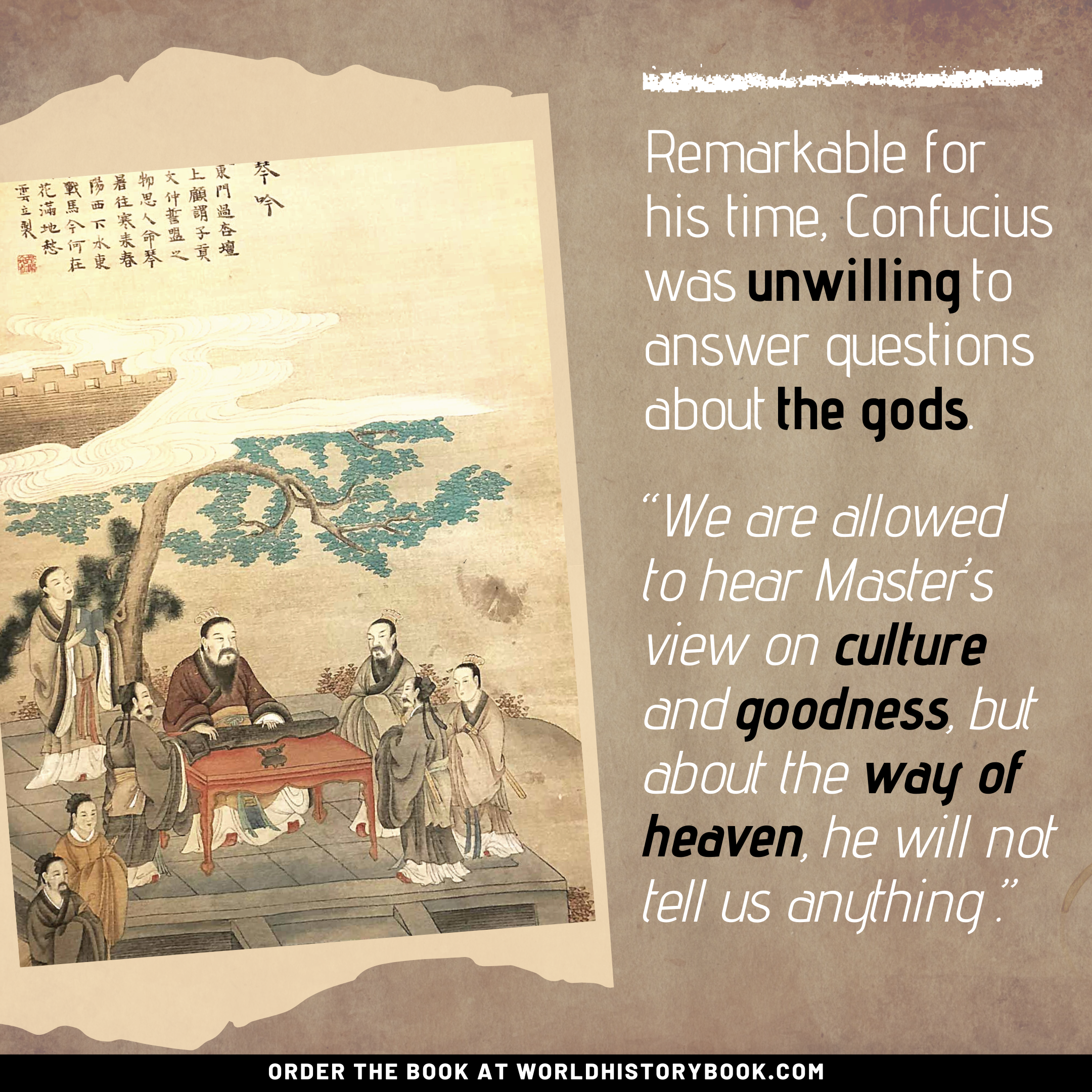 In the last year of his life, Confucius was burdened by the loss of both his son and his favorite disciple, Yan Hui. The relationship between Confucius and Yan Hui was very strong. His disciples wrote:

When Yan Hui died, the Master wept with uncontrollable emotion. His followers said, "Master, you have gone too far." The Master said, "Have I? If not for this man, for whom should I show so much sorrow?" 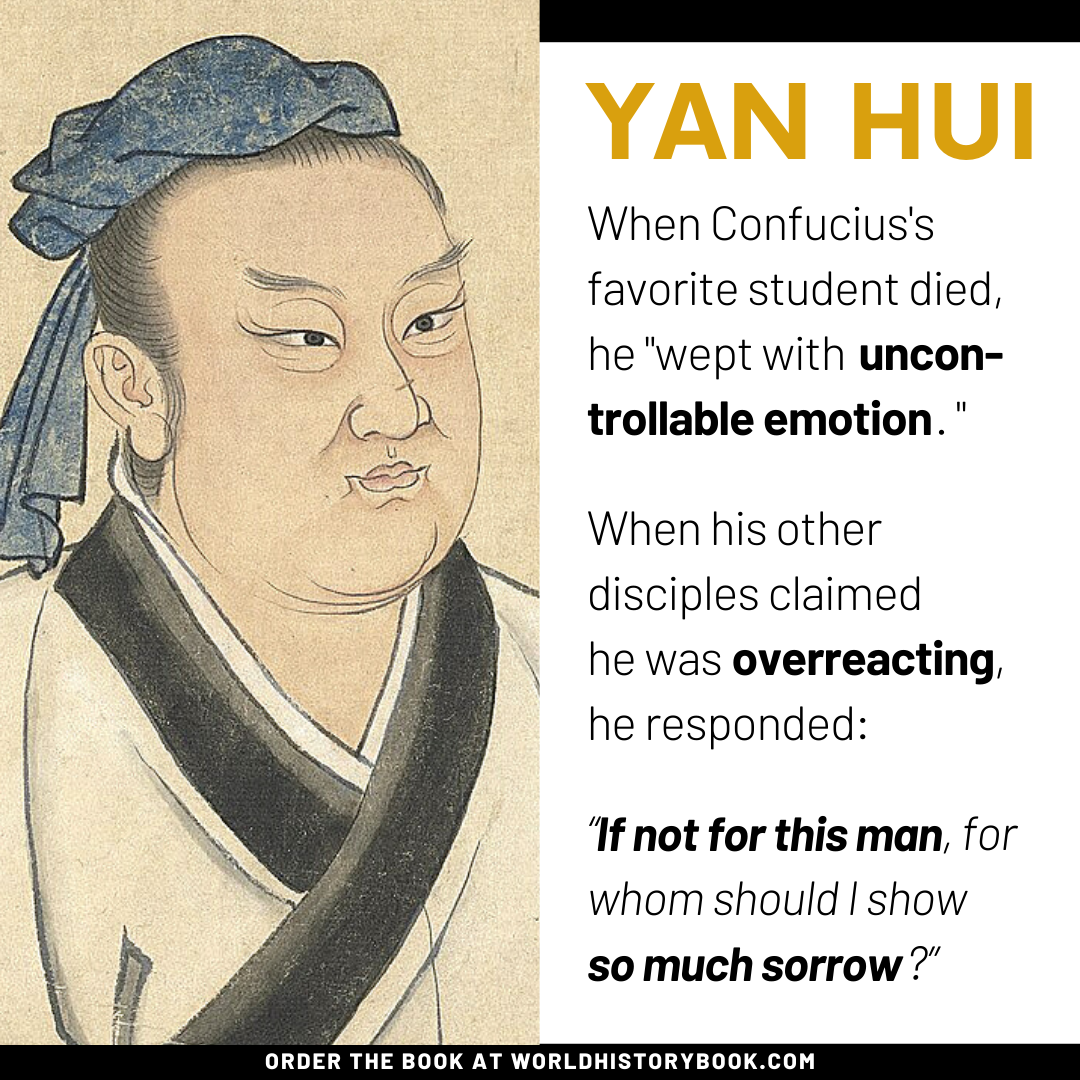