Now, its time for a new topic: Chinese Alchemy! Different from the European tradition, the Chinese alchemists were mostly interested in creating an exilir of immortality. Needless to say, this endeavour was the source of many interesting and exciting stories. I am very excited to share with you the greatest of these stories. 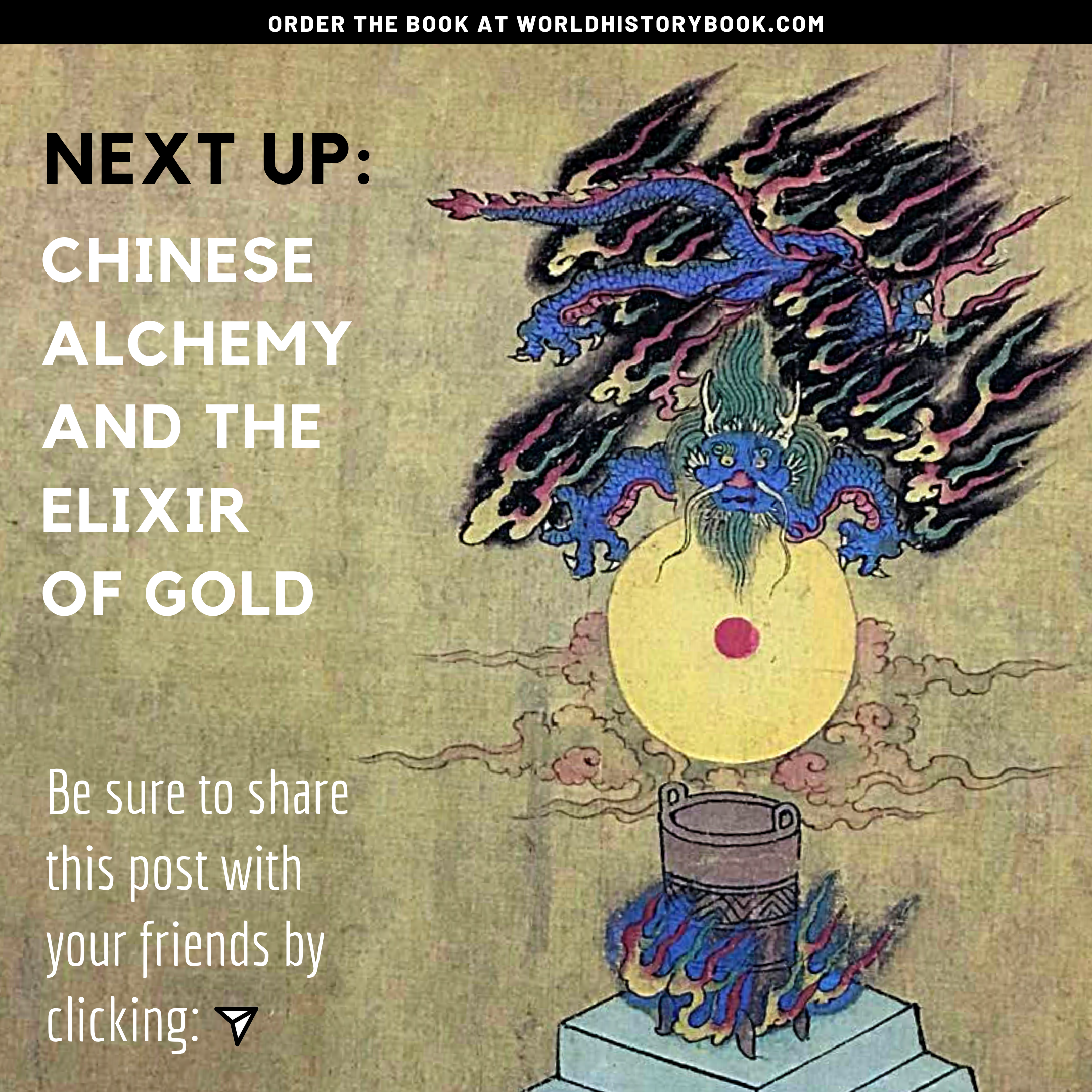 The First Emperor of China

Qin Shi Huang became the first emperor of China in 221 BC, uniting China for the first time. Qin Shi Huang was obsessed with the possibility of attaining eternal life. To this end, he employed alchemists to concoct an elixir of youth. Ironically, his death in 210 BC was probably caused by drinking one of these potions, which apparently contained dangerously high quantities of mercury. To secure his place in the afterlife, he already ordered the creation of the famous terracotta army. 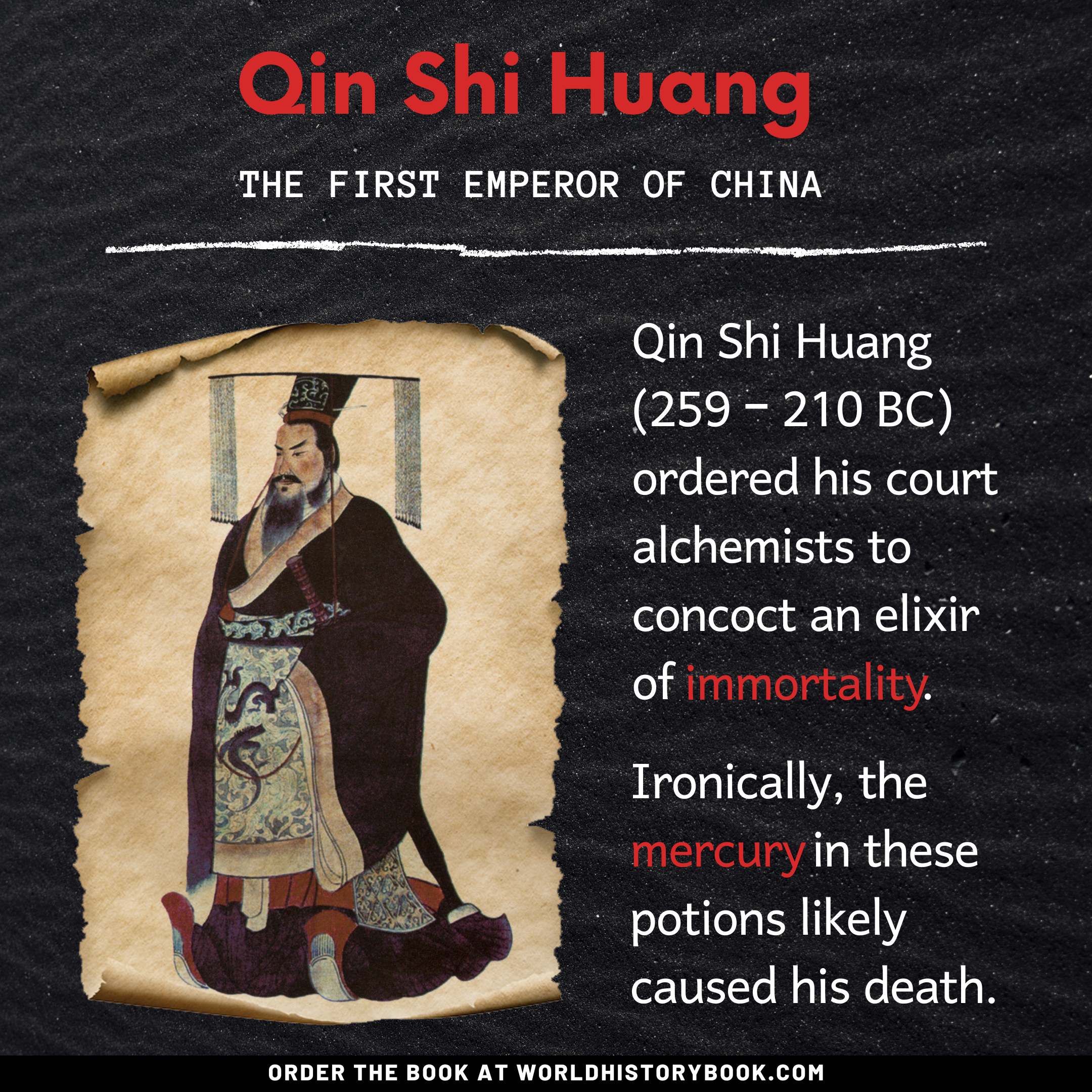 The Elixir of Immortality

Xu Fu (b. 255 BC) was a Chinese alchemist and explorer, who served as a court sorcerer in Qin Dynasty China. Later, he was sent by Qin Shi Huang to the eastern seas twice to look for the elixir of immortality that legend said was hidden on a legendary island on which immortals lived. It was believed that the fleet included 60 ships, containing thousands on crew members and virgin boys and girls. 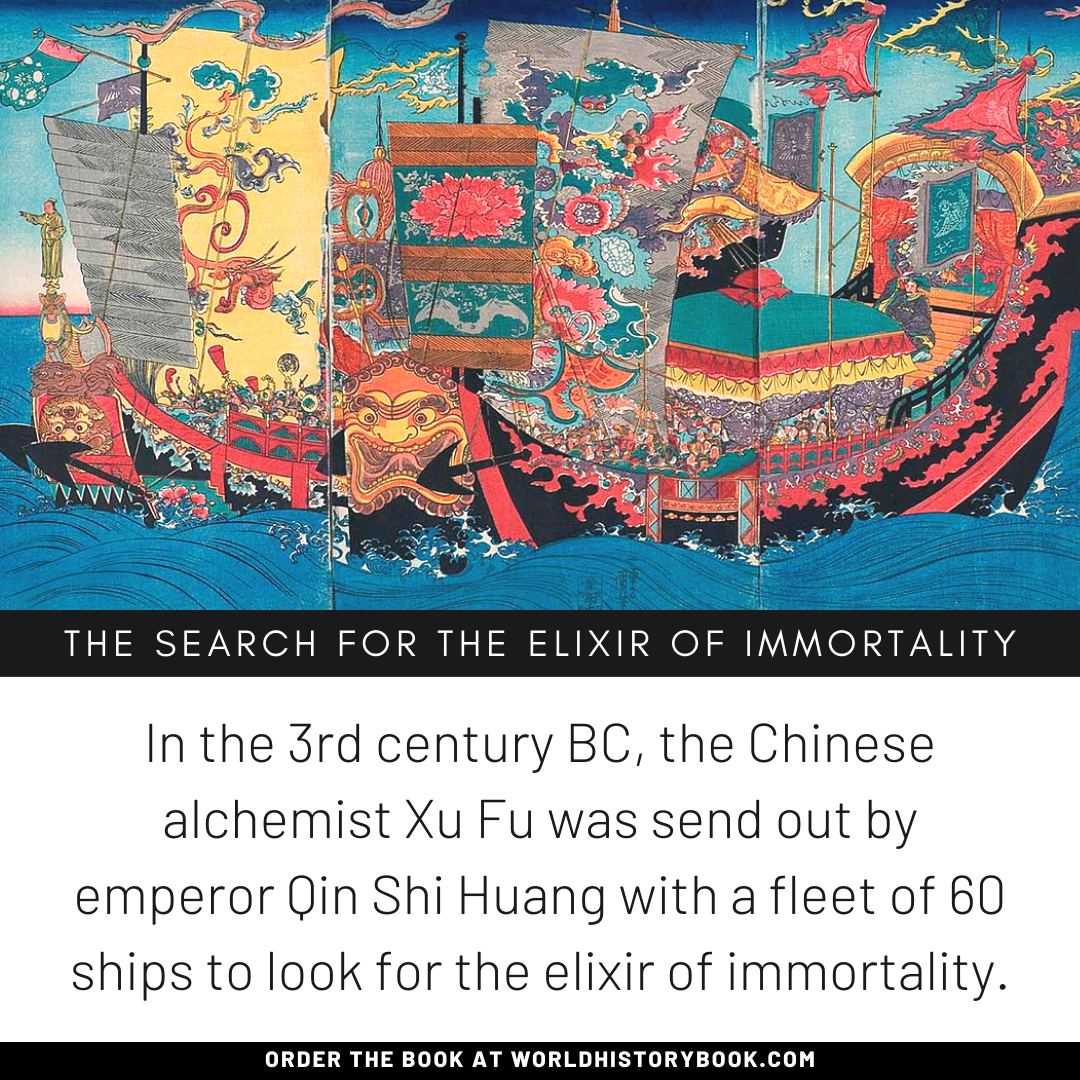 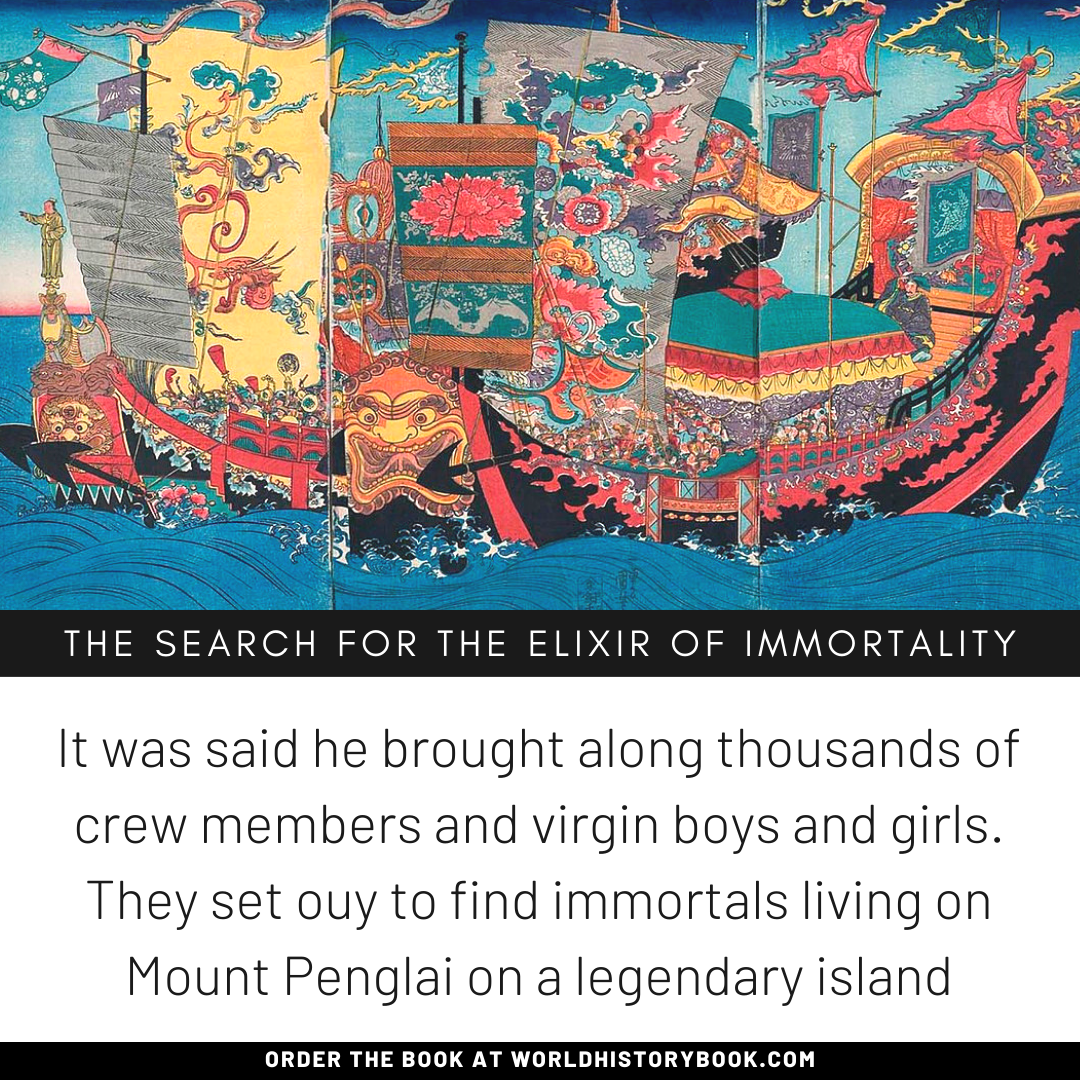 The Alchemist of Emperor Wu

The earliest remaining text from China that mentions alchemy dates from 133 BC. In this text, the alchemist Li Shaojun suggested to Emperor Wu of the Han Dynasty that he should follow the example of the mythical Yellow Emperor, who was said to have performed an alchemical method at the beginning of human history.

Li Shaojun said that the emperor should perform offerings to an alchemical stove in order to summon supernatural beings, in whose presence cinnabar would transmute itself into gold. Eating and drinking from cups and dishes made of that gold would prolong the emperor's life and enable him to meet the Immortals. Then, after performing a ritual, the emperor would obtain immortality. We read:

"By making offerings to the stove, one can summon the supernatural beings (wu). If one summons them, cinnabar can be transmuted into gold. When gold has been produced and made into vessels for eating and drinking, one can prolong one's life. If one's life is prolonged, one will be able to meet the immortals of the Penglai Island in the midst of the sea. When one has seen them and has performed the Feng and Shan ceremonies, one will never die. The Yellow Emperor did just so. Thereupon the emperor for the first time personally made offerings to the stove. He sent several fangshi to the sea to search for Penglai and for those like Master Anqi, and also occupied himself with the transmutation of cinnabar and other substances into gold." 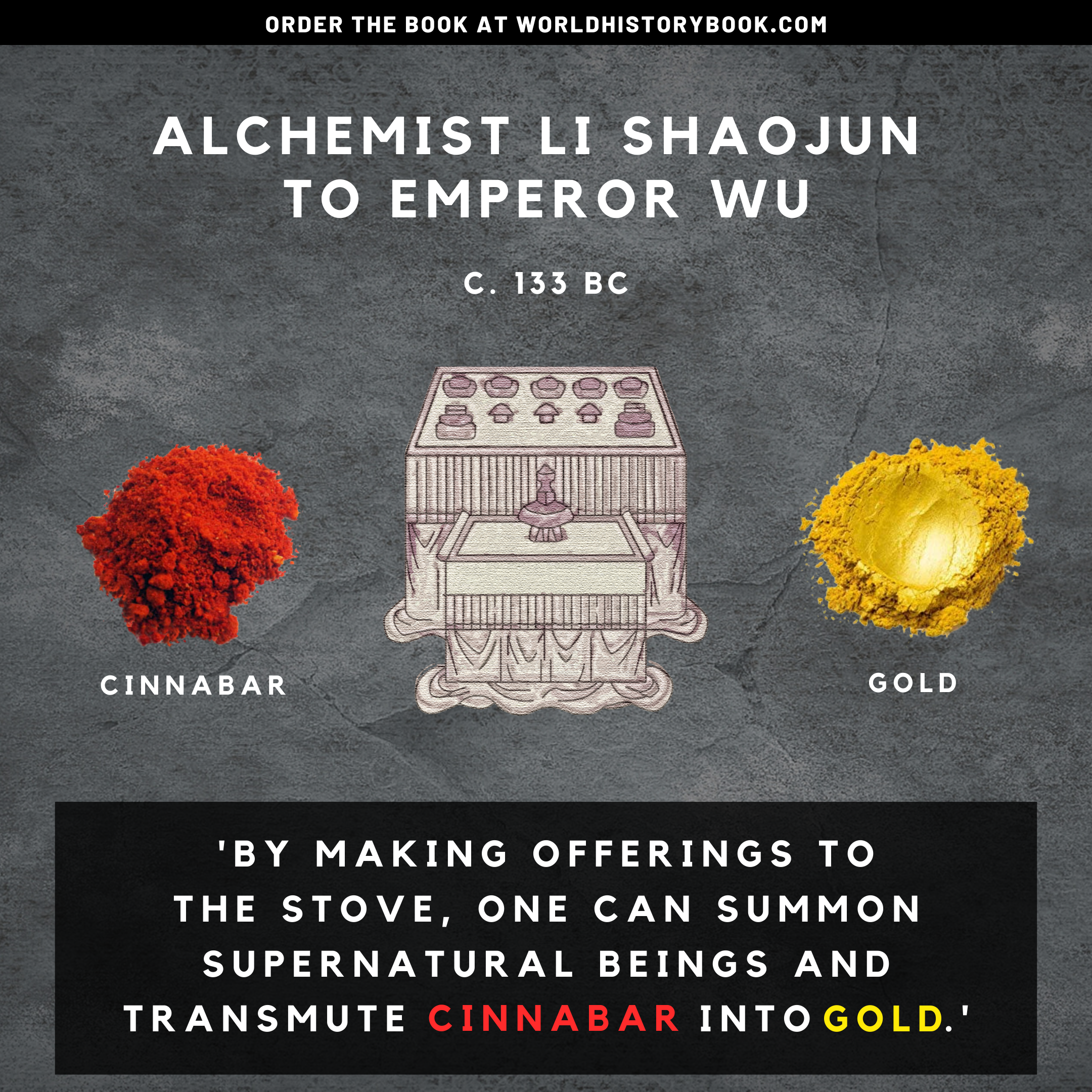 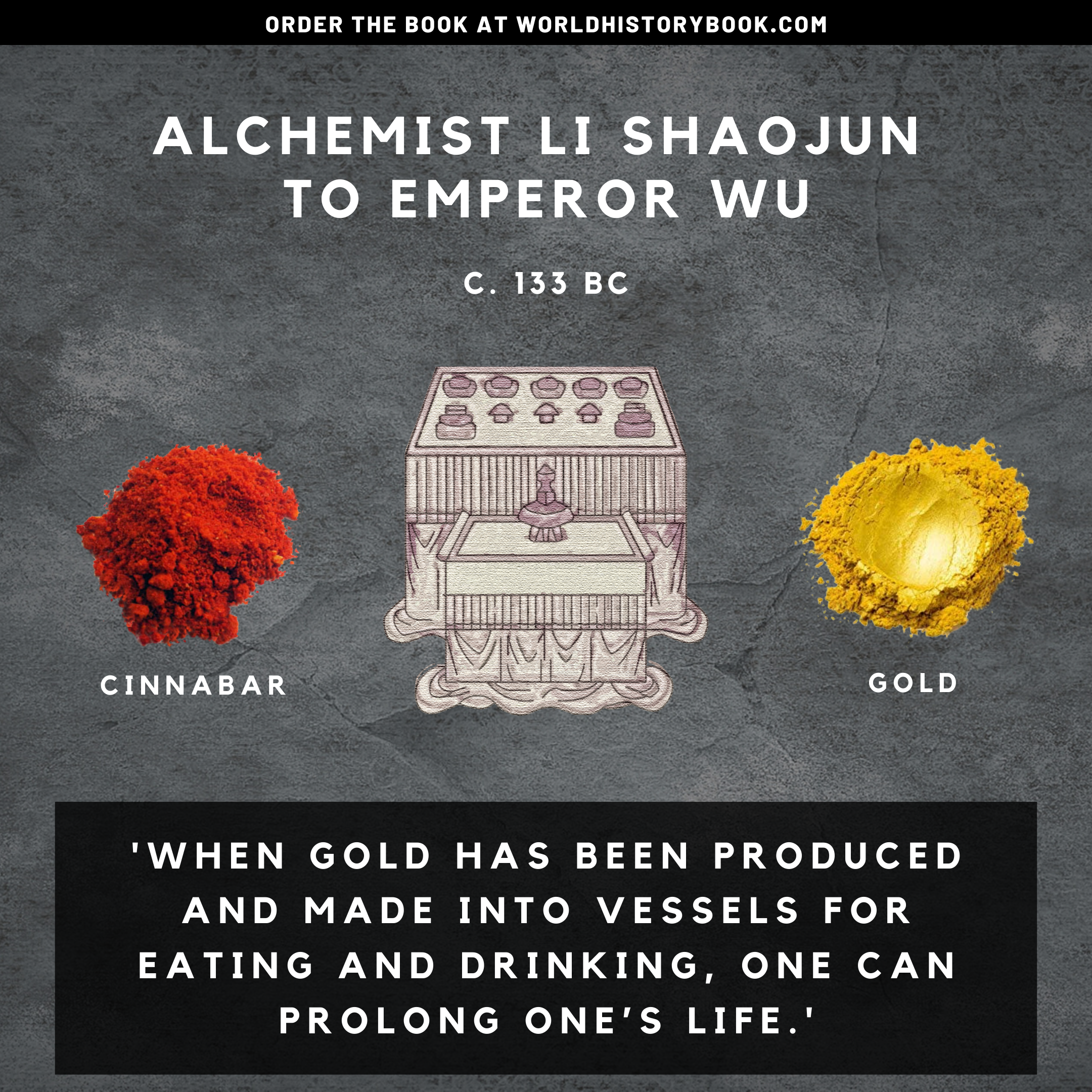 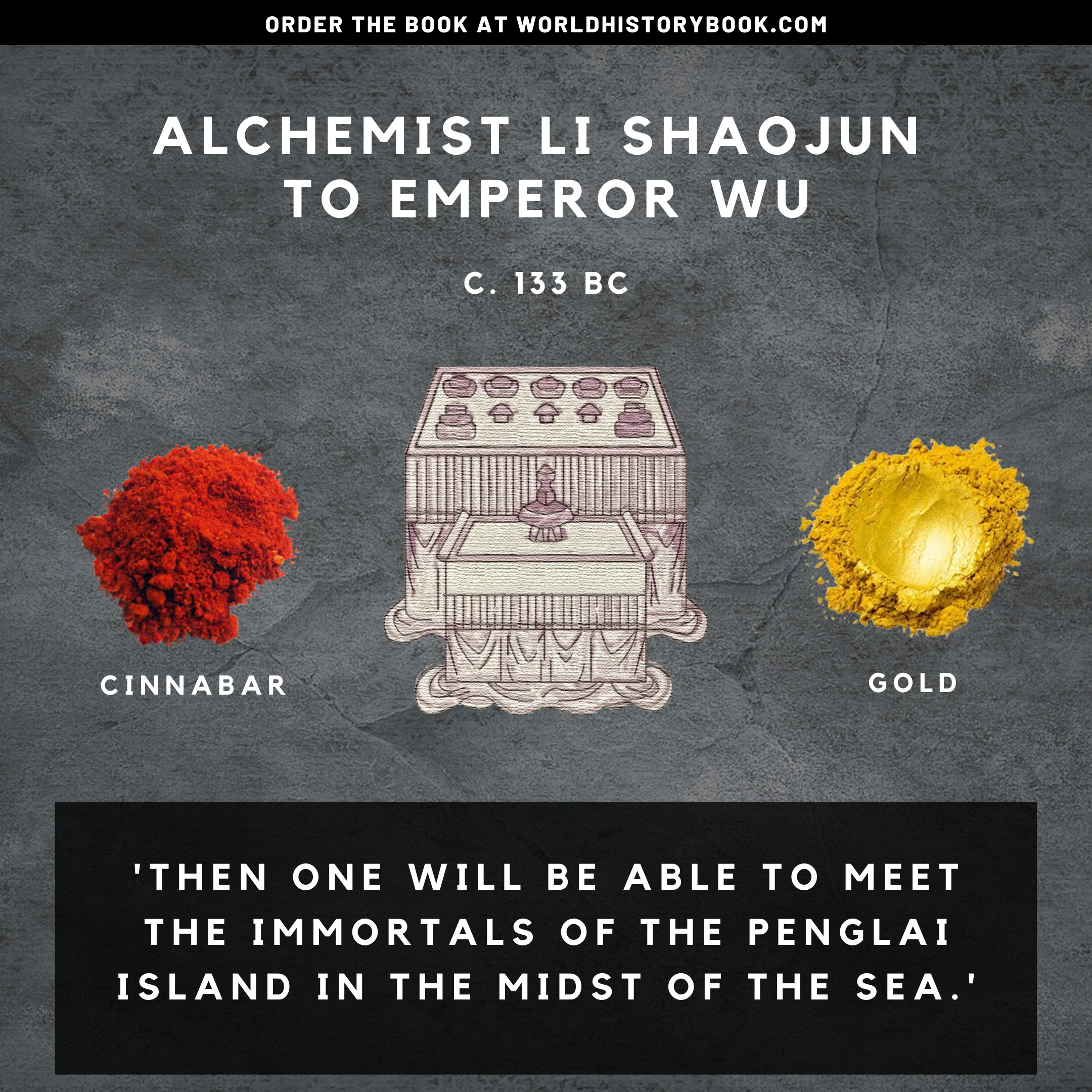 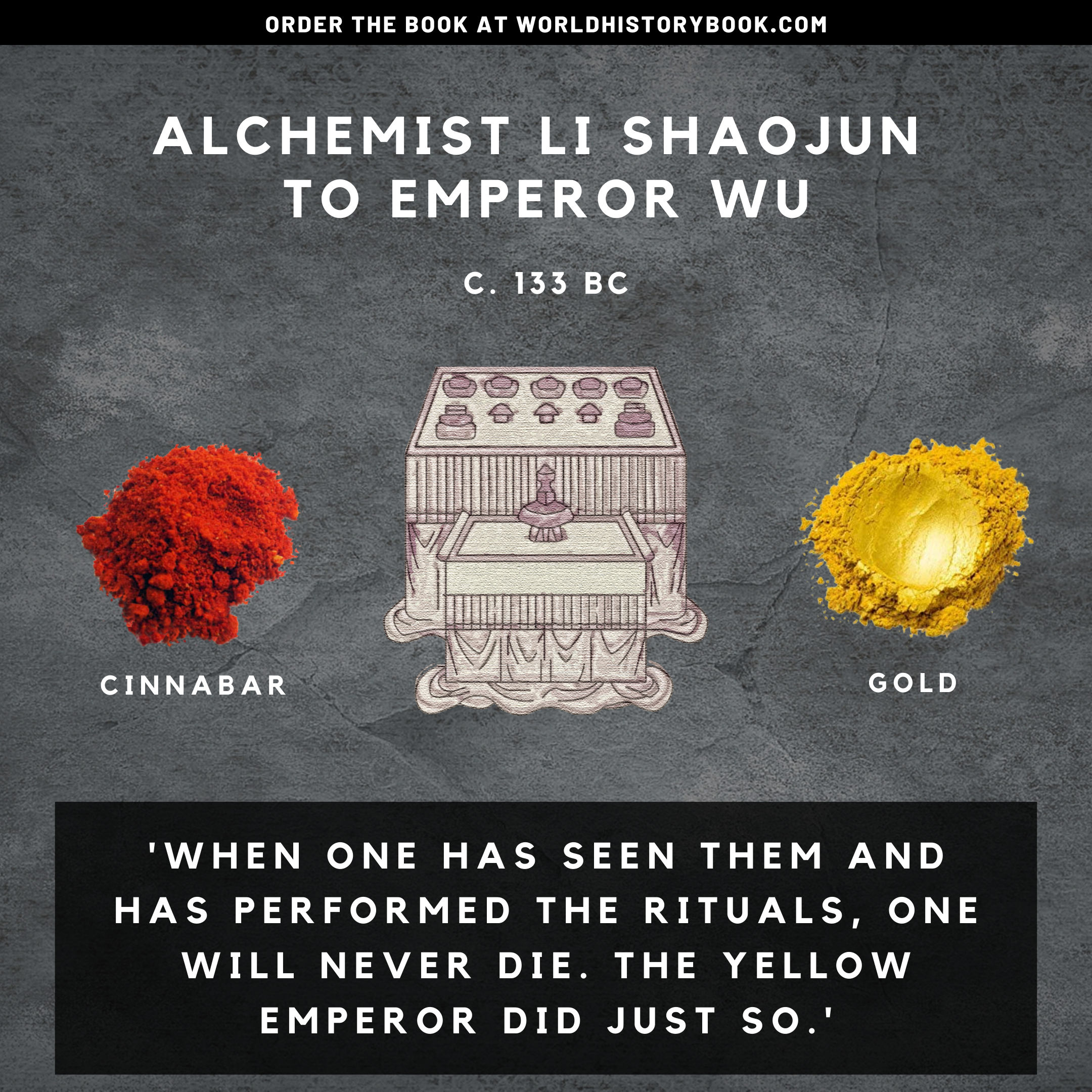 In the previous post, we read that the Daoists believed that the universe formed in a number of steps from unity to duality or yin and yang, to the five elements (water, fire, earth, wood and metal) and finally to the 'ten thousands things' that we see around us in our daily lives.

The task of the alchemist became to reverse this process, bringing matter back to the elements, then to yin and yang and finally to the unity or Dao, from which the world was created.

Since the Dao was consideres eternal, it was believed that ingesting this matter would make someone immortal. 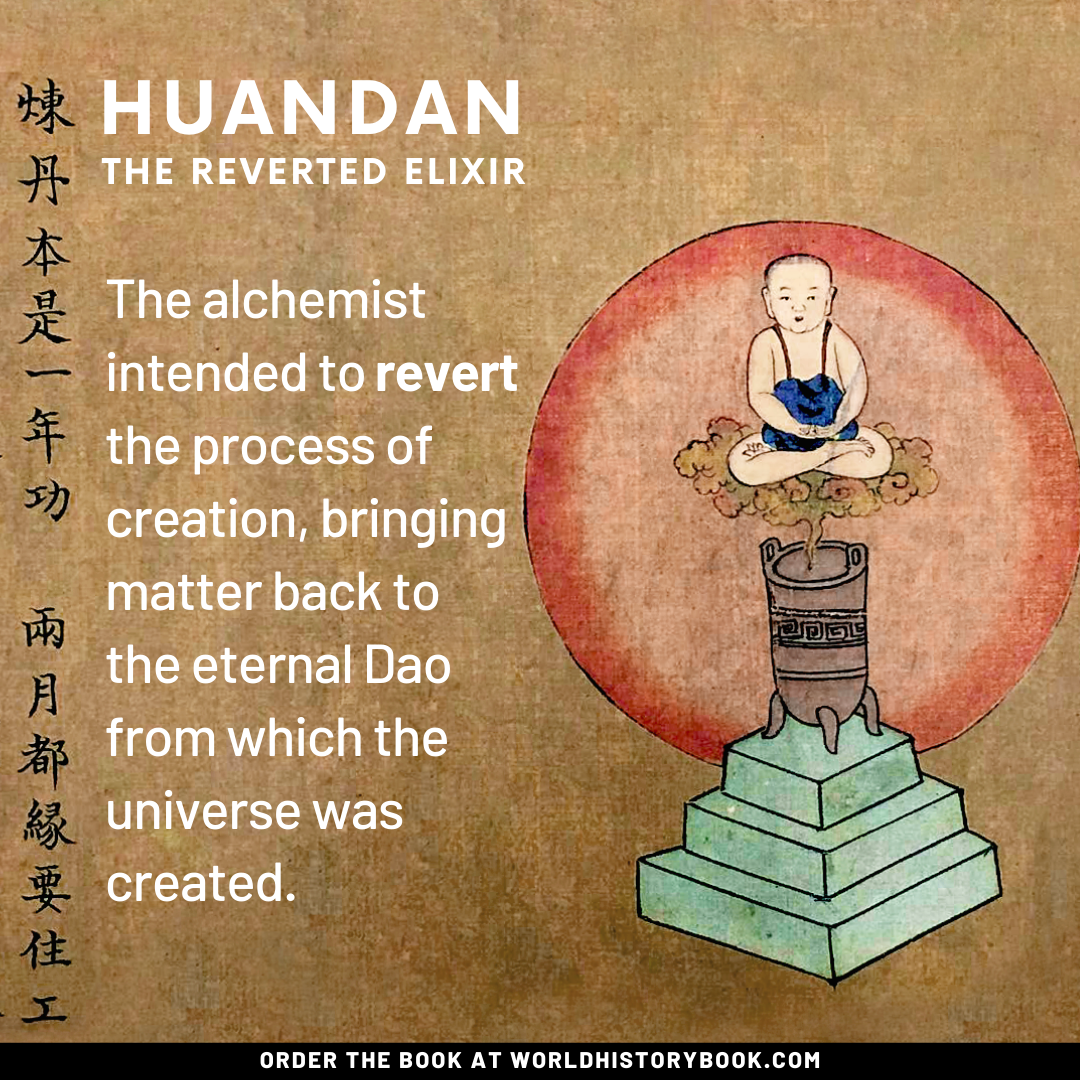 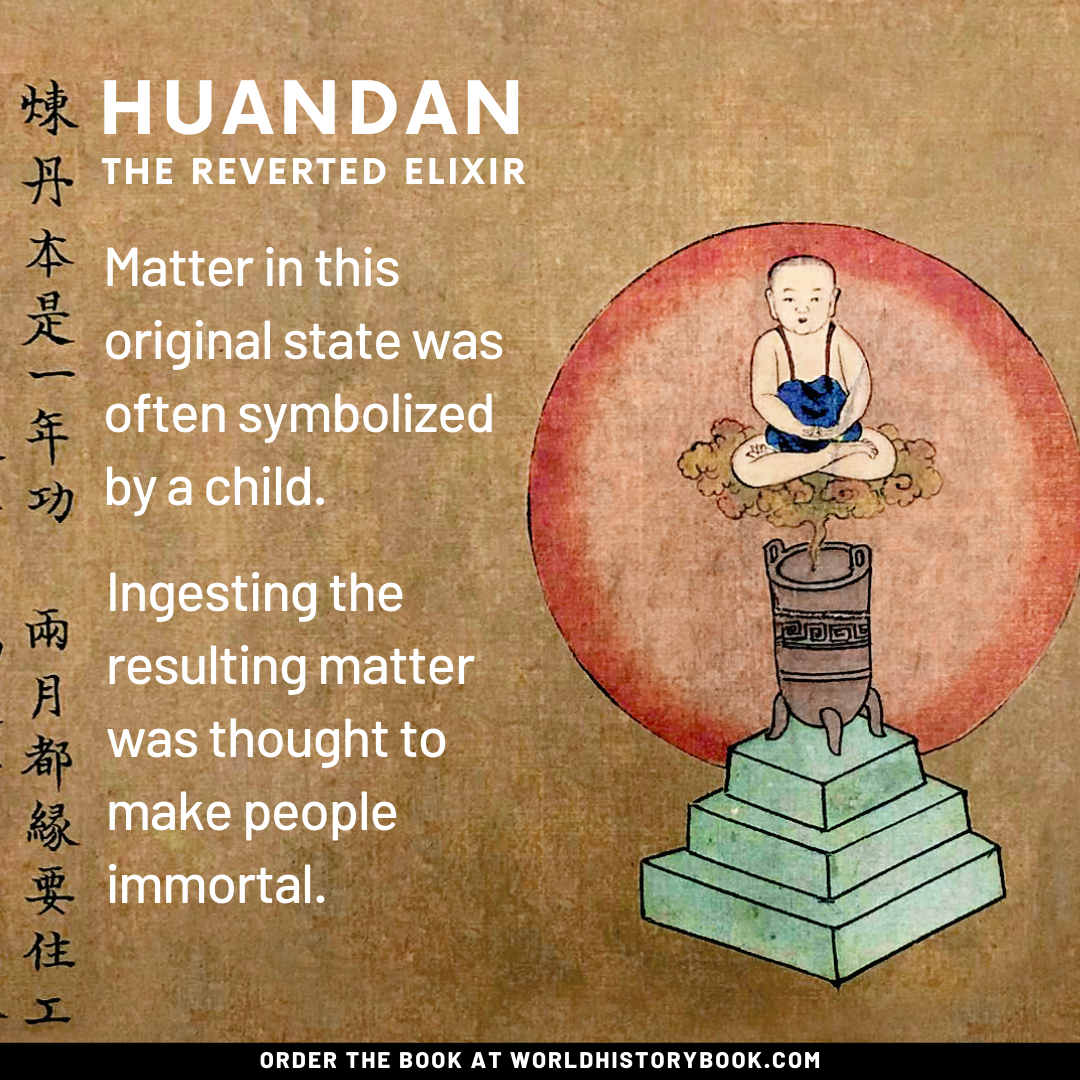 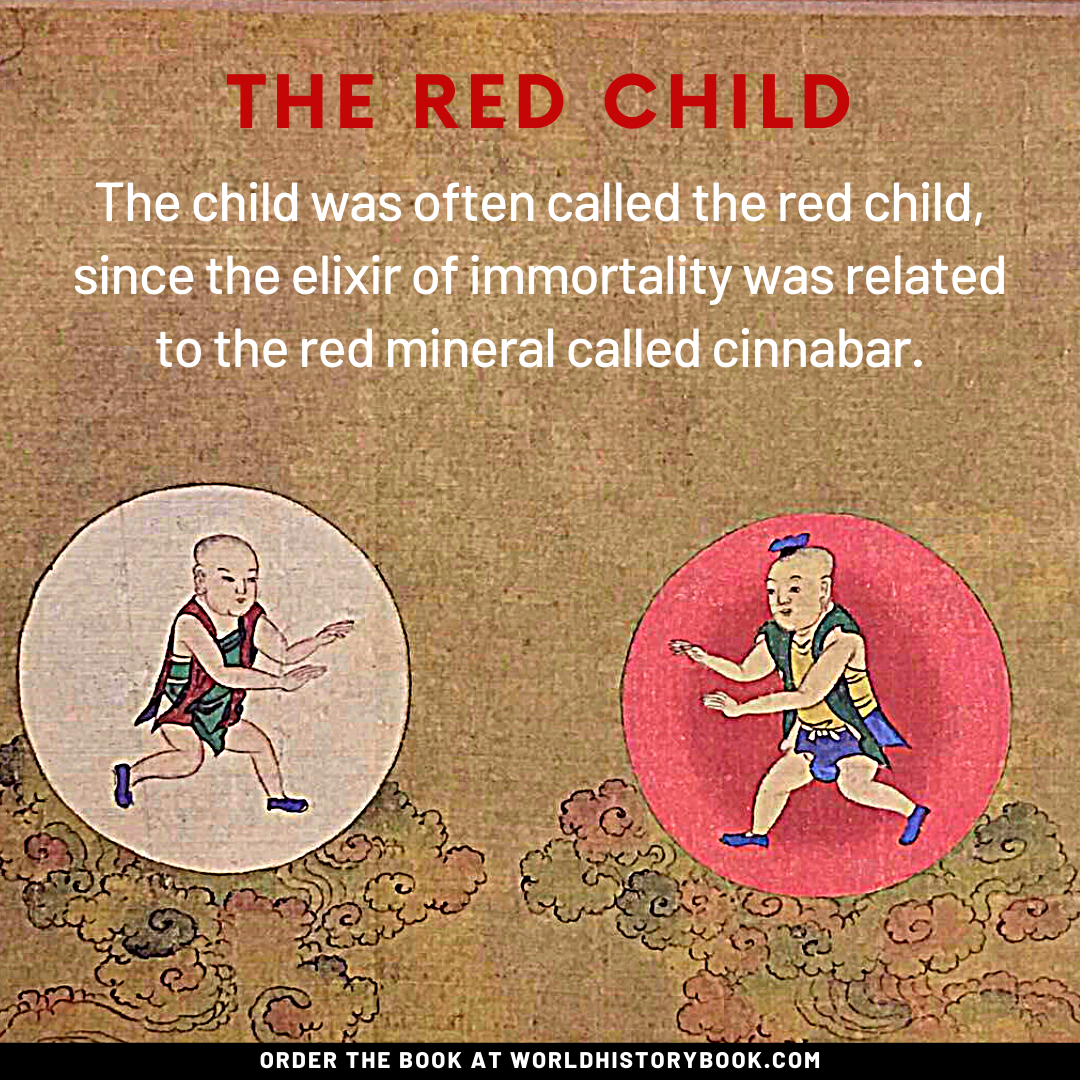 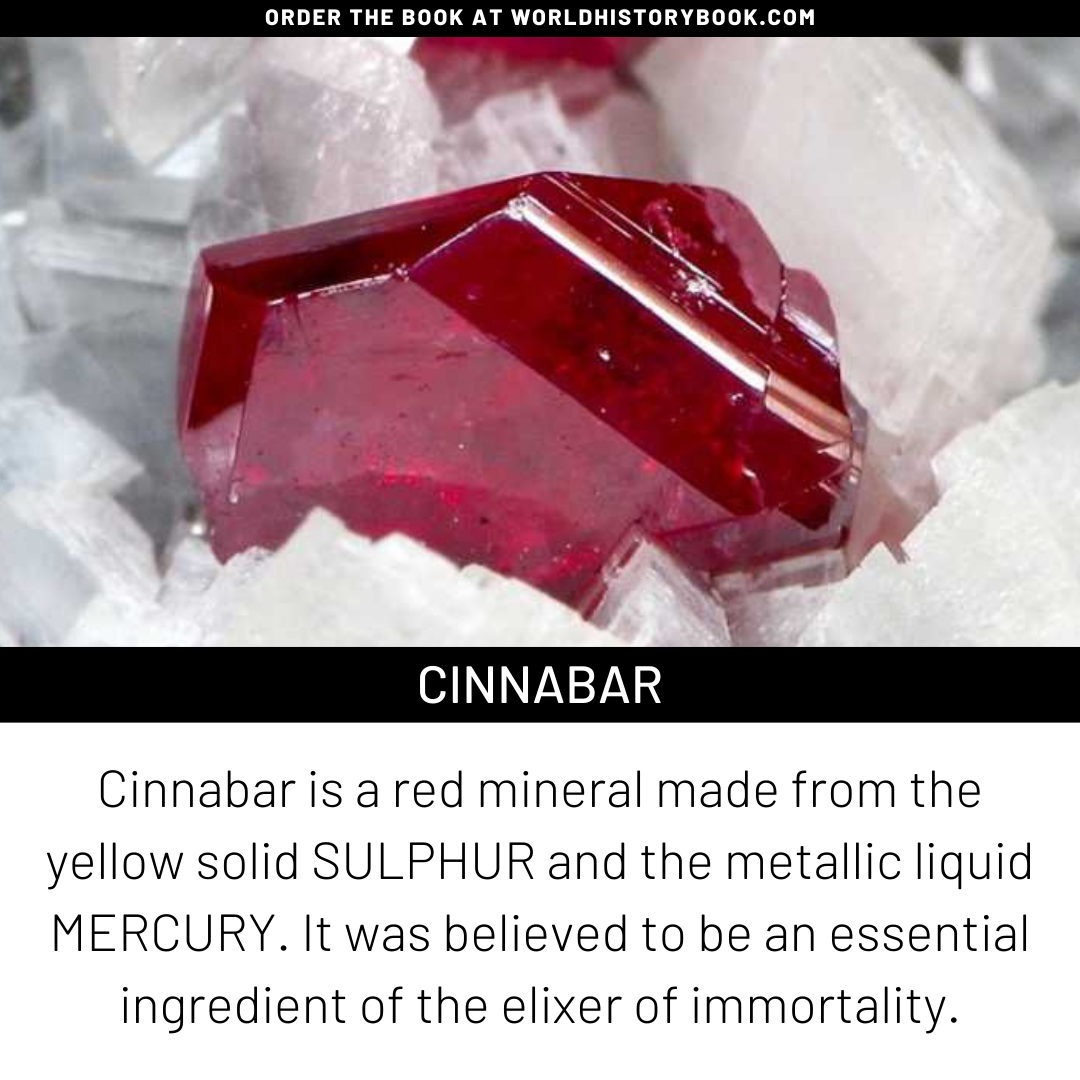 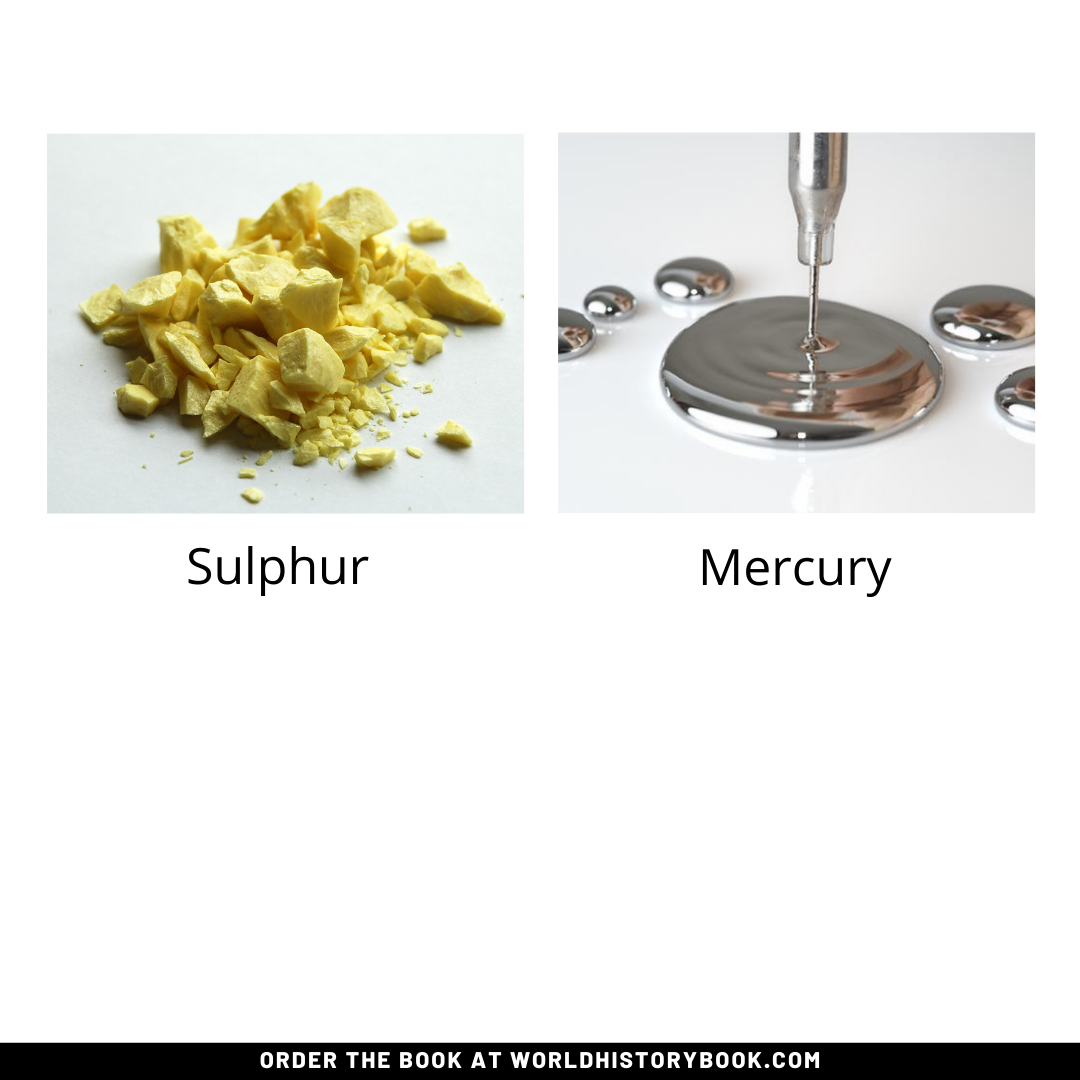 The words yin and yang have a long history. They were already found on oracle bones from the Shang dynasty (1600 BC). At that point, yang was associated with sunlight during the day, while the yang referred to the lack of sunlight at night.

In time, these terms came to attain a deeper more philosophical meaning. Yang came to represents the masculine, active participation, light, hotness, dryness, the good and the positive. Yin the feminine, passiveness, darkness, coldness, wetness, evil and the negative.

Together, as yin-yang, they represented the interplay of these opposites in the world. Their balance ensures the harmony in the cosmos. It was believed that both yin and yang are present in all things and that their interaction causes the variety of things we see in the world.

In the image of this post, we see the first visual representation of yin yang. The full image represents the stages of creation. The first circle represents unity, the second the duality or yin and yang. The third the five elements (water, fire, earth, wood and metal). The fourth male and female and the fifth the 'ten thousands things' that we see around us today. 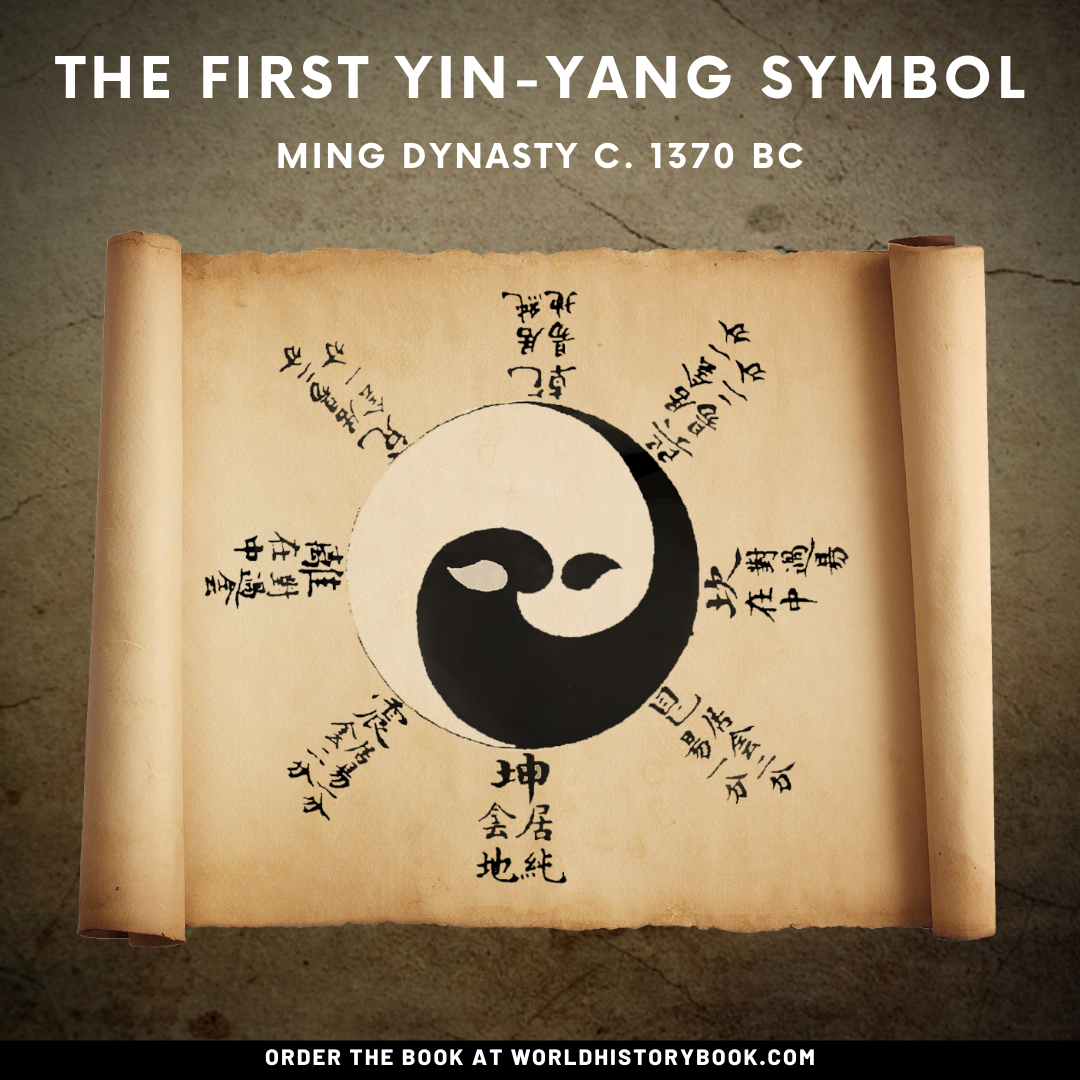 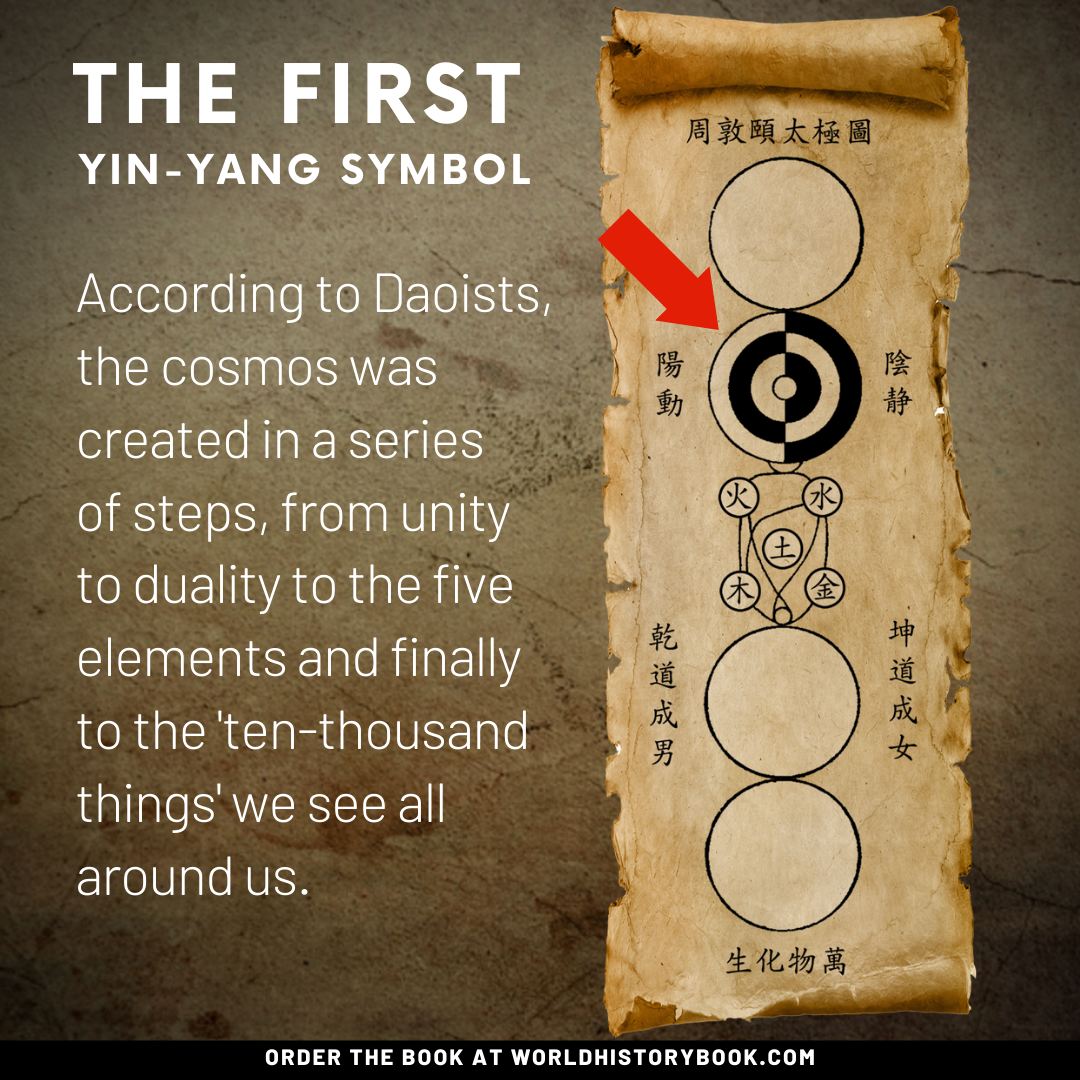 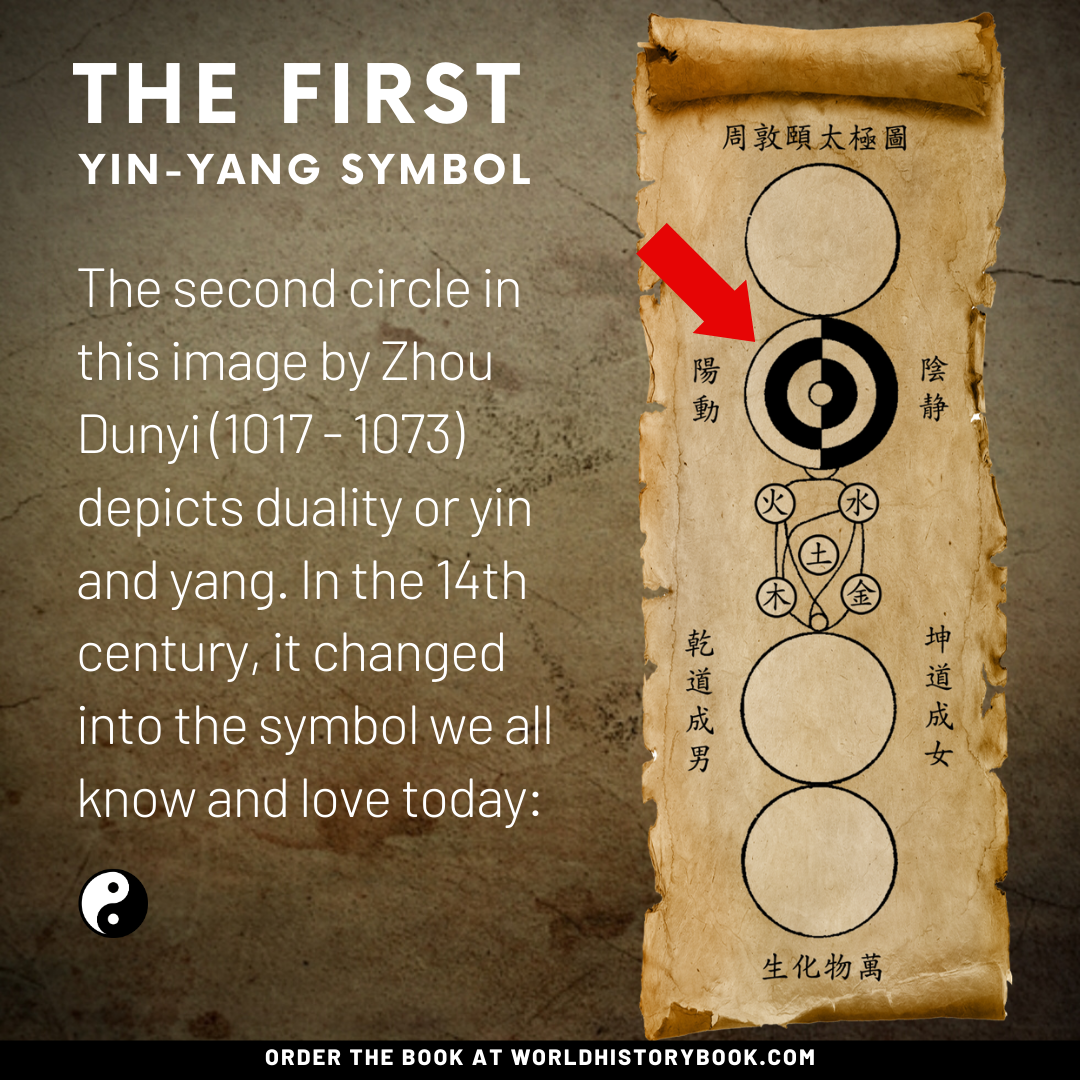 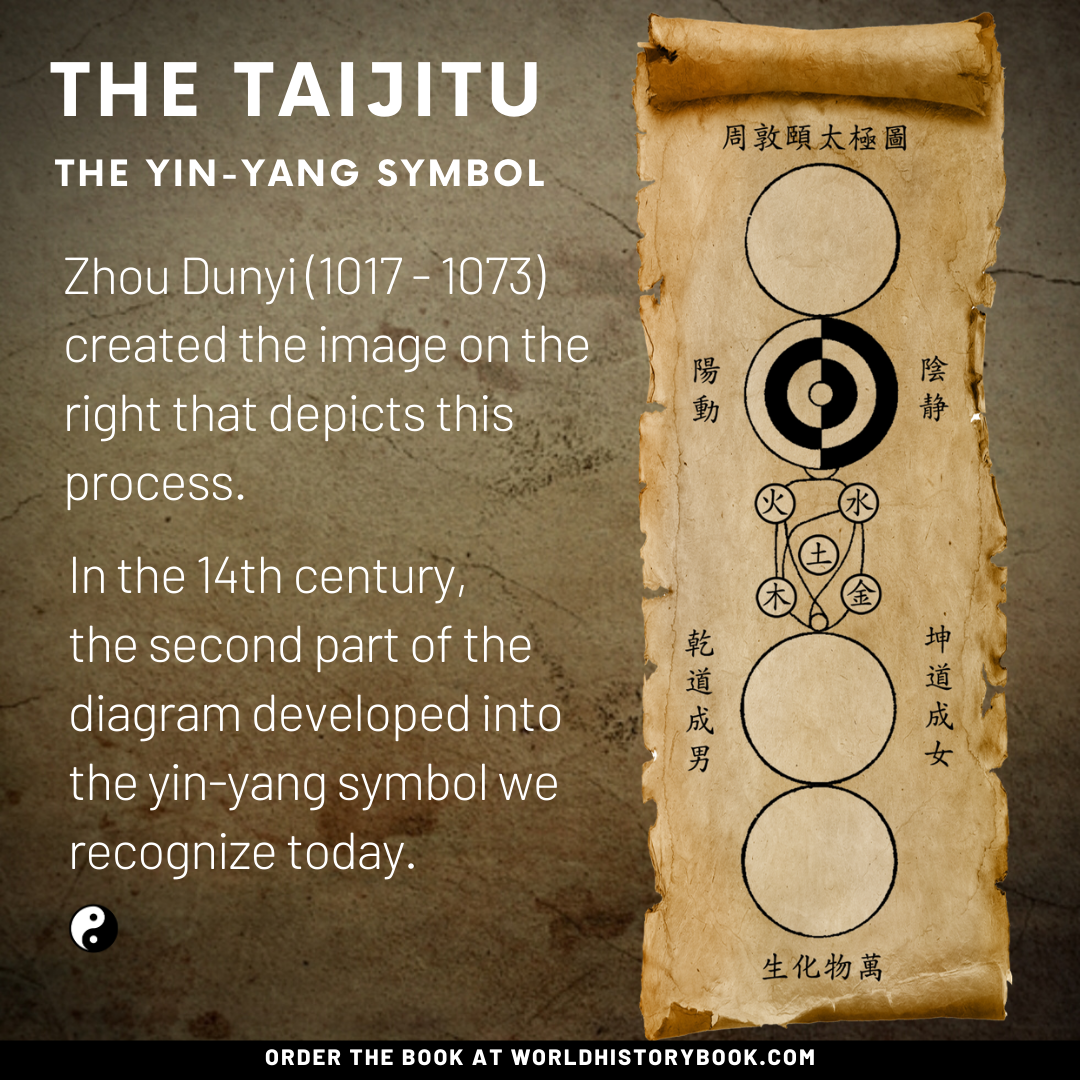 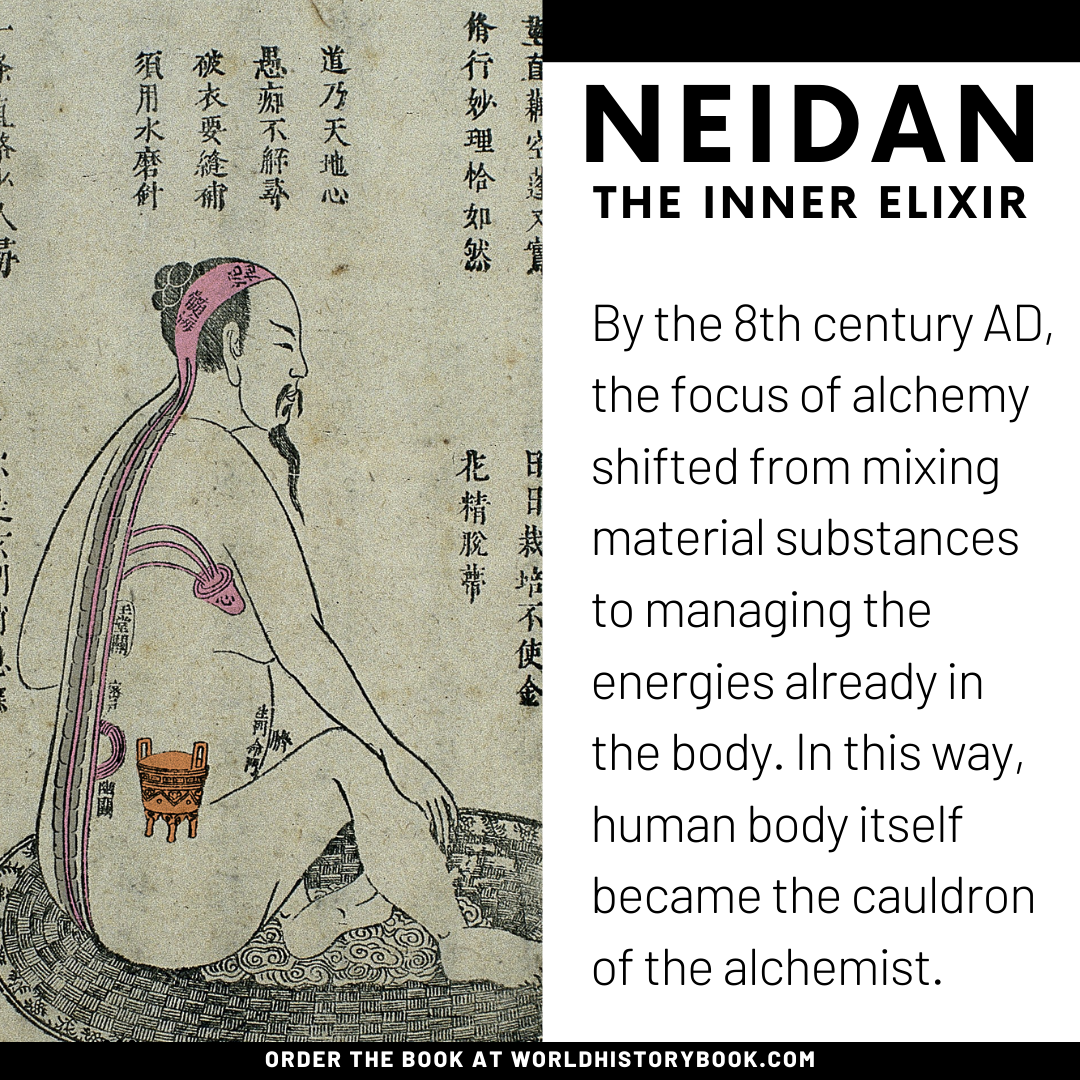 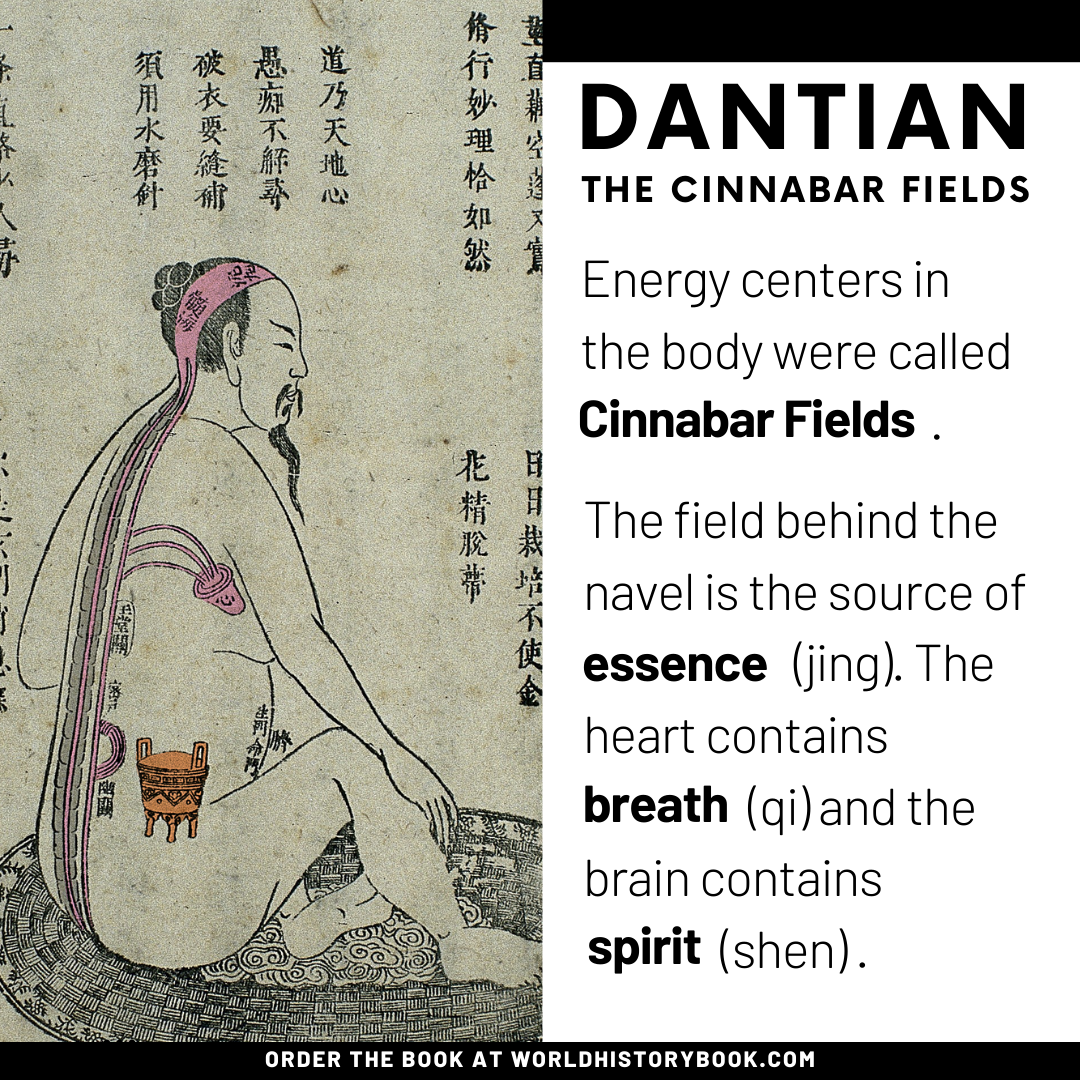 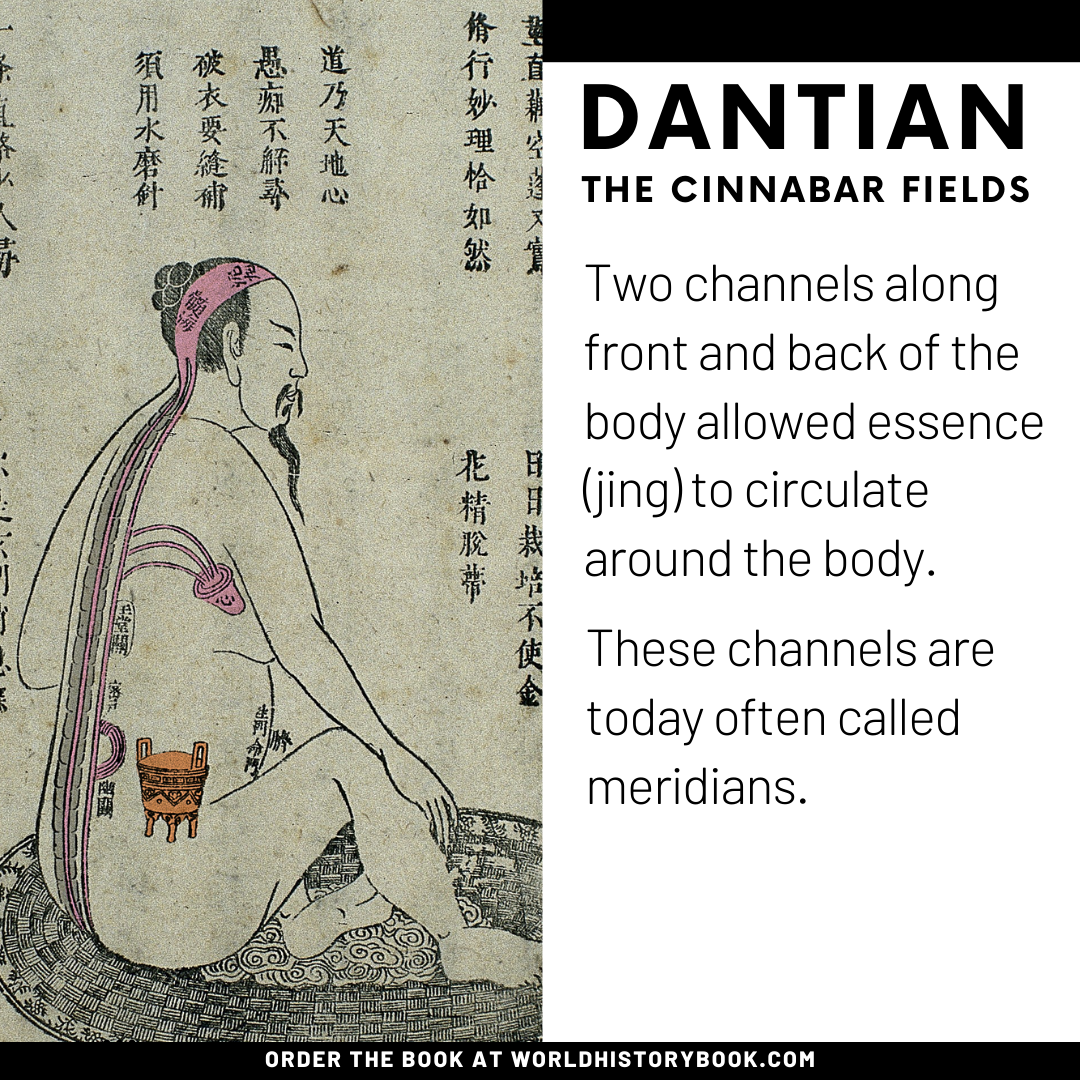 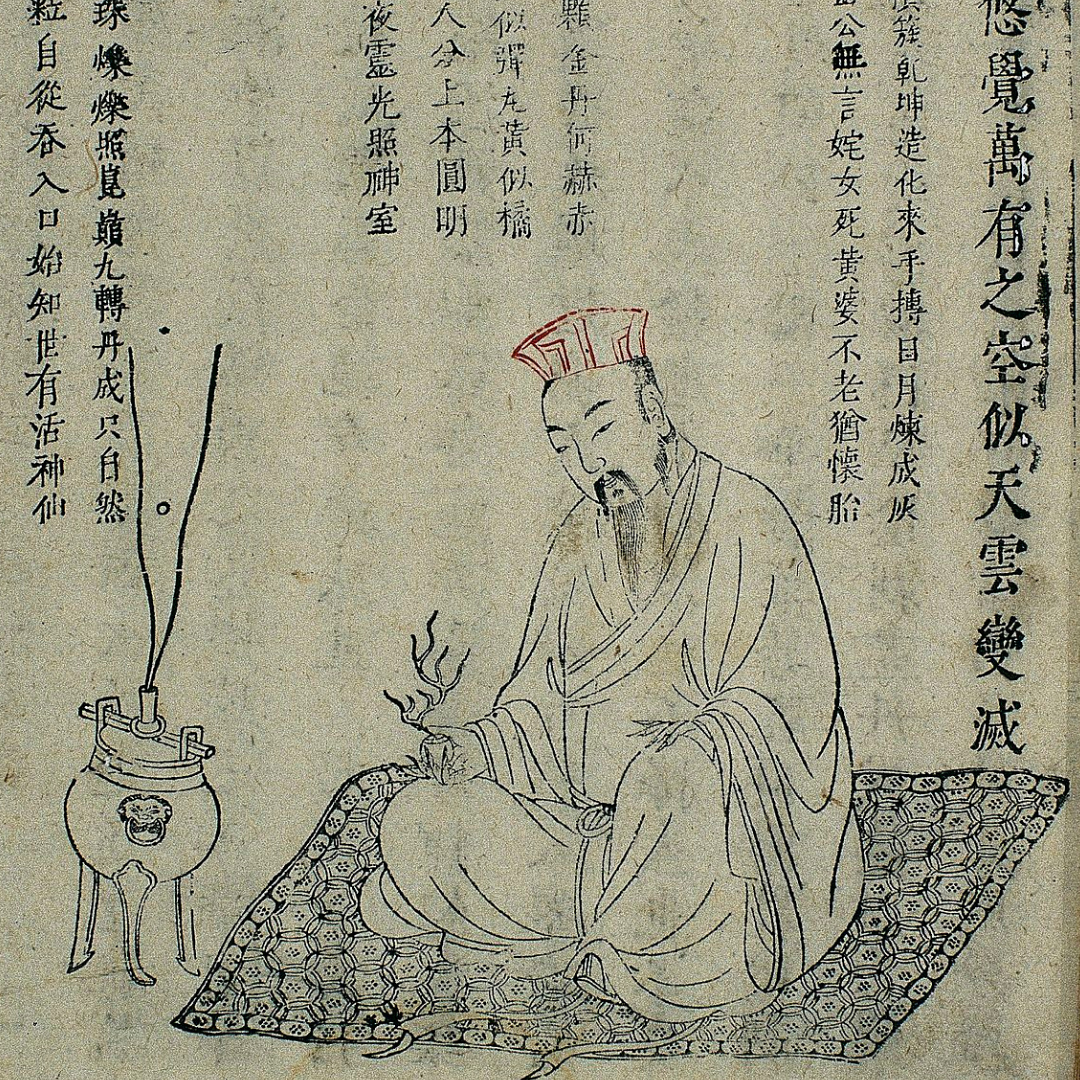