THE LIFE OF THE BUDDHA

In the following posts, we will trace the mythology of the Life of the Buddha. Let's start at the very beginning:

The story starts with a boy named Gautama (sixth or fifth century BC), who grew up as prince in a palace. Shortly after his birth, a seer predicted the boy would become a great spiritual leader.

Gautama's father, King Suddhodana, realized this meant his son would become a hermit and end his royal line. In an attempt to avoid this fate, Suddhodana set out to shield his son from all the suffering in the world, so he would see no need to turn to a religious life. 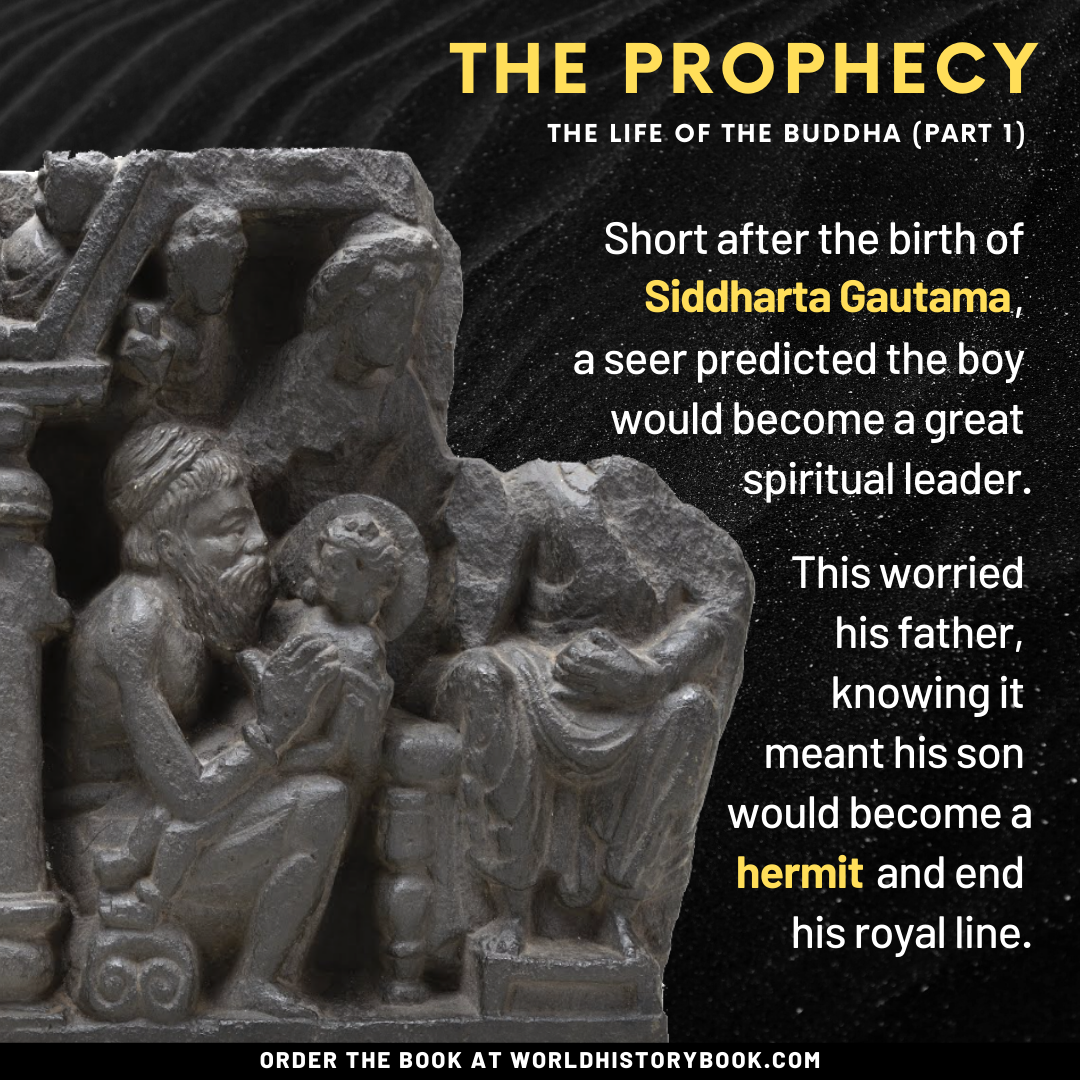 The story starts with a boy named Gautama (sixth or fifth century BC), who grew up as prince in a palace. Shortly after his birth, a seer predicted the boy would become a great spiritual leader. Gautama's father, King Suddhodana, realized this meant his son would become a hermit and end his royal line. In an attempt to avoid this fate, Suddhodana set out to shield his son from all the suffering in the world, so he would see no need to turn to a religious life. He gave him all the delights the world had to offer to ensure he would never think of leaving the palace. Once older, his father made sure to surround him with beautiful women of pleasure who sang, danced, and played music, and arranged for him a beautiful bride, with whom he had a son. 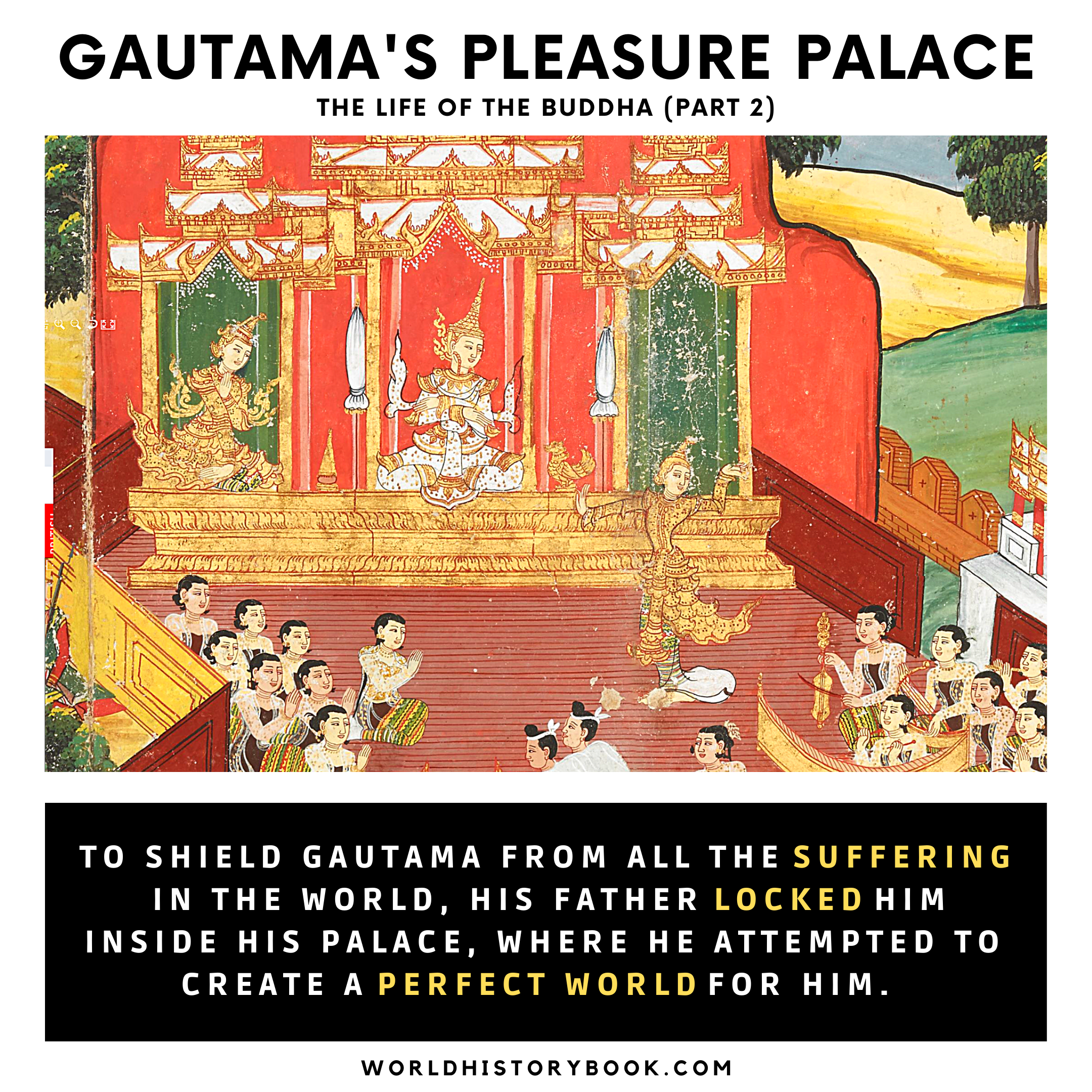 The Four Sights of Suffering

Gautama's father tried to shield his son from suffering, but the boy's curiosity could not be contained. Having heard of the beauty of the nearby groves, he wanted to see them. His father granted his wish, but he staged the trip thoroughly to prevent him from seeing anything that would upset him. He was moved around in a golden chariot on a road covered with flowers, yet the gods had other plans and intervened with four sights of suffering. The first one was the appearance of an old man. We read:

"Who is that man there with the white hair, feeble hand gripping a staff, eyes lost beneath his brows, limbs bent and hanging loose? Has something happened to alter him, or is that his natural state?" "That is old age," said the charioteer, "the ravisher of beauty, the ruin of vigor, the cause of sorrow, destroyer of delights, the bane of memories, and the enemy of the senses. In his childhood, that one too drank milk and learned to creep along the floor, came step by step to vigorous youth, and he has now, step by step, in the same way, gone on to old age." "What! And will this evil come to me too?" "Without doubt, by the force of time," said the charioteer. 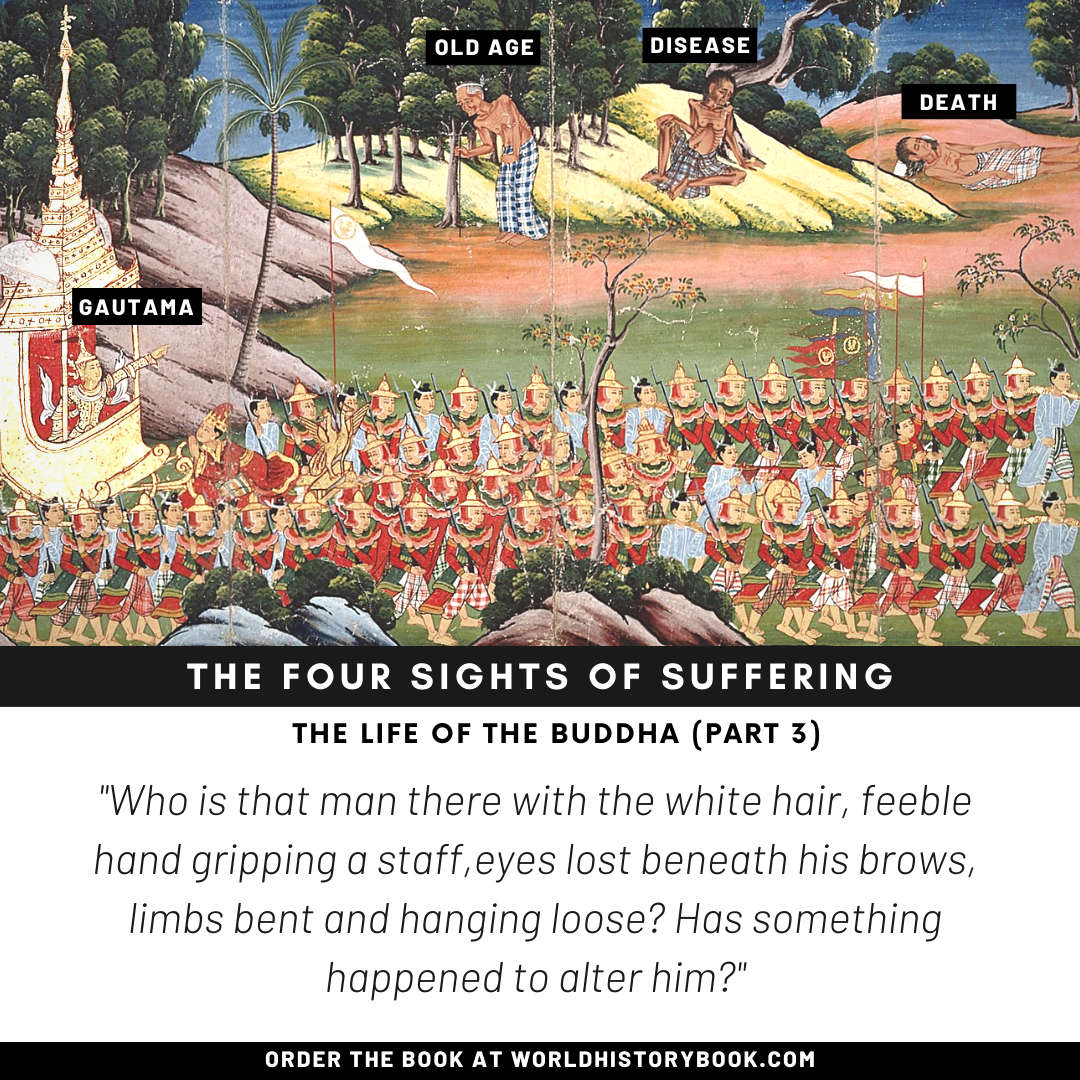 After seeing old age, disease, and death, Gautama knew he had to escape the palace. The gods magically opened the door of the palace, and Gautama rode out with the help of his charioteer. When outside the city, Gautama looked back and roared like a lion. 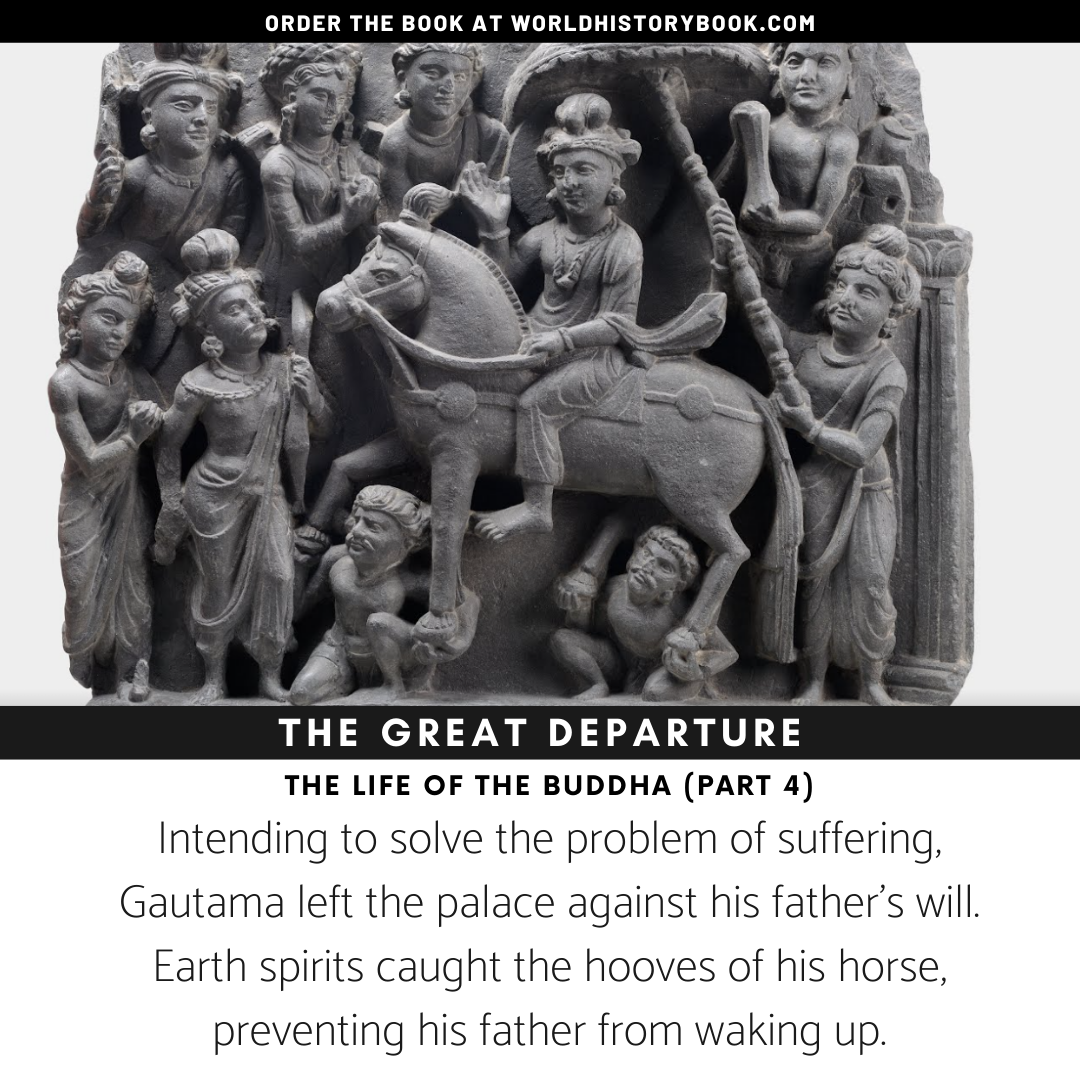 Gautama joined a group of monks who were practicing severe fasting, until he had only skin and bone remaining. At one point, he was so weak he was left for dead on the side of the road. Yet, despite all his effort and all his suffering, it did not help. His body kept asking him for attention, and he still experienced lust and cravings. He then began to question the approach. How was one to attain liberation without any strength left? There was no need for extreme fasting. Instead, the mind should be put at rest by having just the right amount of food to satisfy the senses so that craving disappeared. This path of moderation, he called the Middle Way between pleasure (kama) and pain (mara). 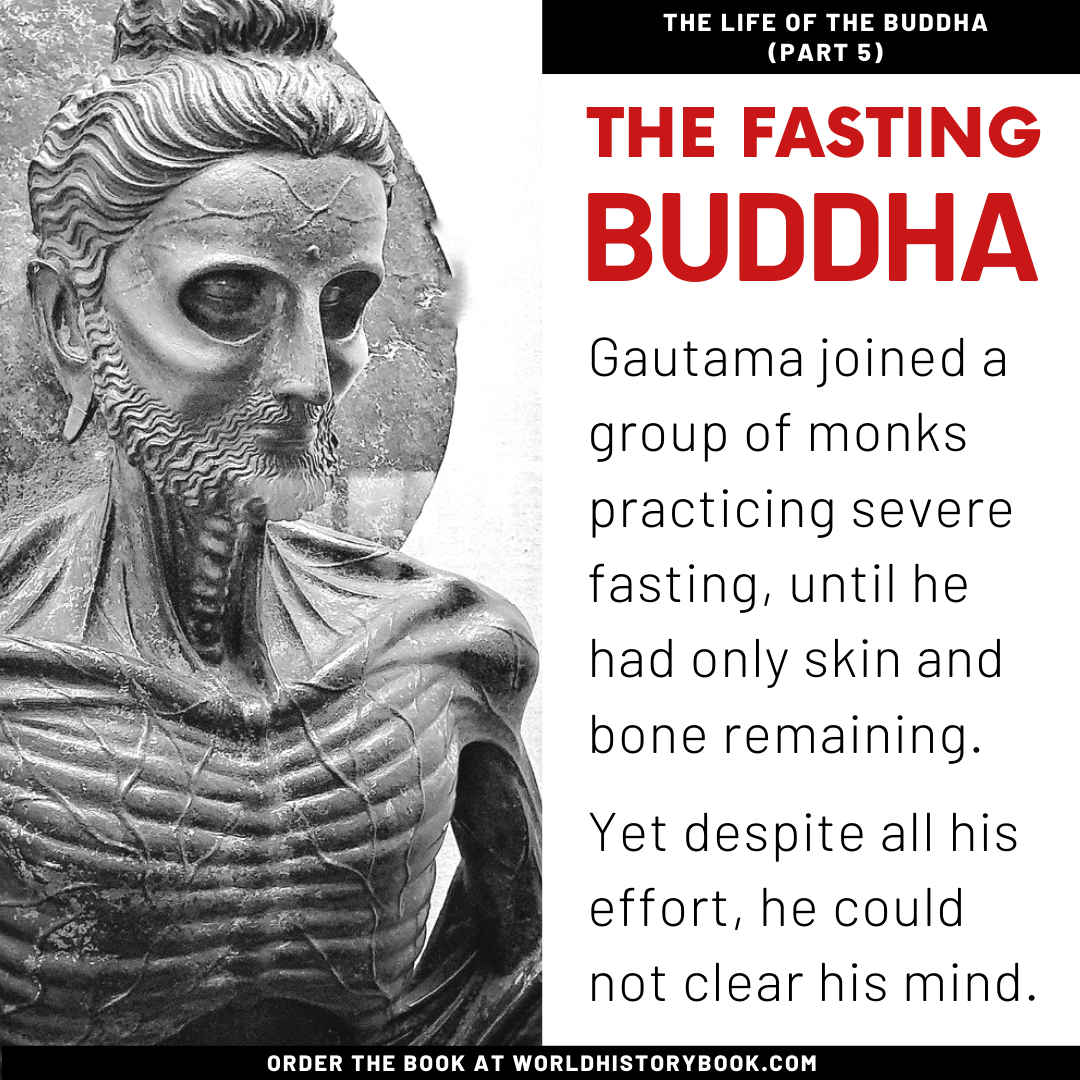 Next, Gautama approached the Bodhi-tree (the tree of awakening). He first positioned himself on the southern side of the tree. Instantly the southern half of the world sank until it touched the lowest hell, while the northern side rose to the highest heaven. "This cannot be the place for the attainment of supreme wisdom," he thought. After trying two other sides with the same result, he came to the east side. He sat down, and here the earth did not move. Gautama said to himself:

'This is the Immovable Spot on which all the Buddha's have established themselves. This is the place for destroying passion's net. [...] Let my skin, sinews, and bones become dry and welcome; and let all the flesh and blood of my body dry up; but never from this seat will I stir until I have attained the supreme and absolute wisdom!'

Then a demon appeared, first as Lord Desire (kama) and then as Lord Death (mara), representing lust and fear. Lord Death sent an army of horrifying demons after him. These demons hurled all kinds of objects at the Buddha, but these projectiles turned into flowers before making their impact. All Mara's move had no effect. We read:

'Mara roused against him the fury of the winds. Fierce gales rushed toward him from the horizon, uprooting trees, devastating villages, shaking mountains, but the hero never moved; not a single fold of his robe was disturbed.' 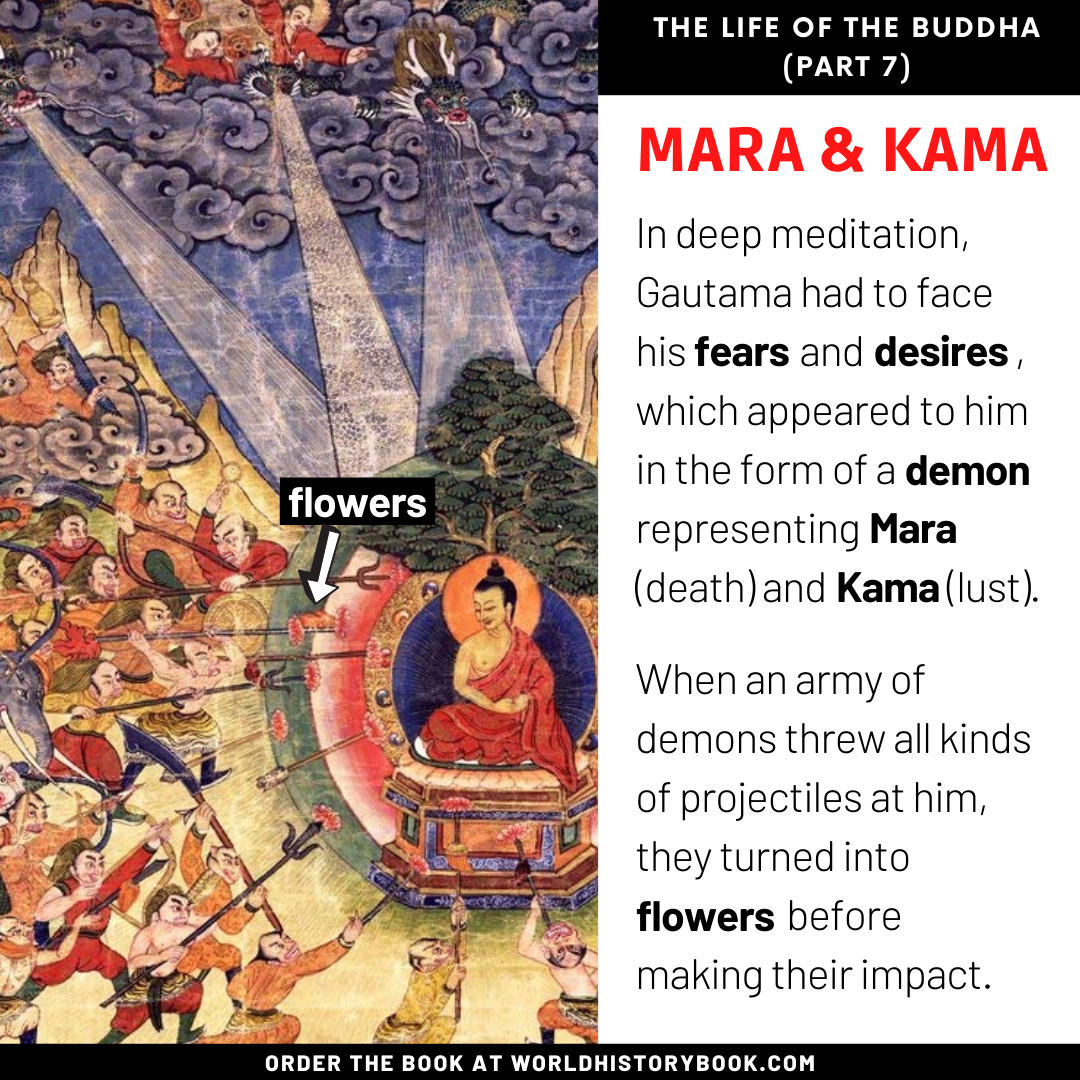 Finally, Gautama overcame the temptations of lust, social duty, and fear of death. And at that moment, he achieved enlightenment (nirvana) and became a Buddha (an "Awakened One") 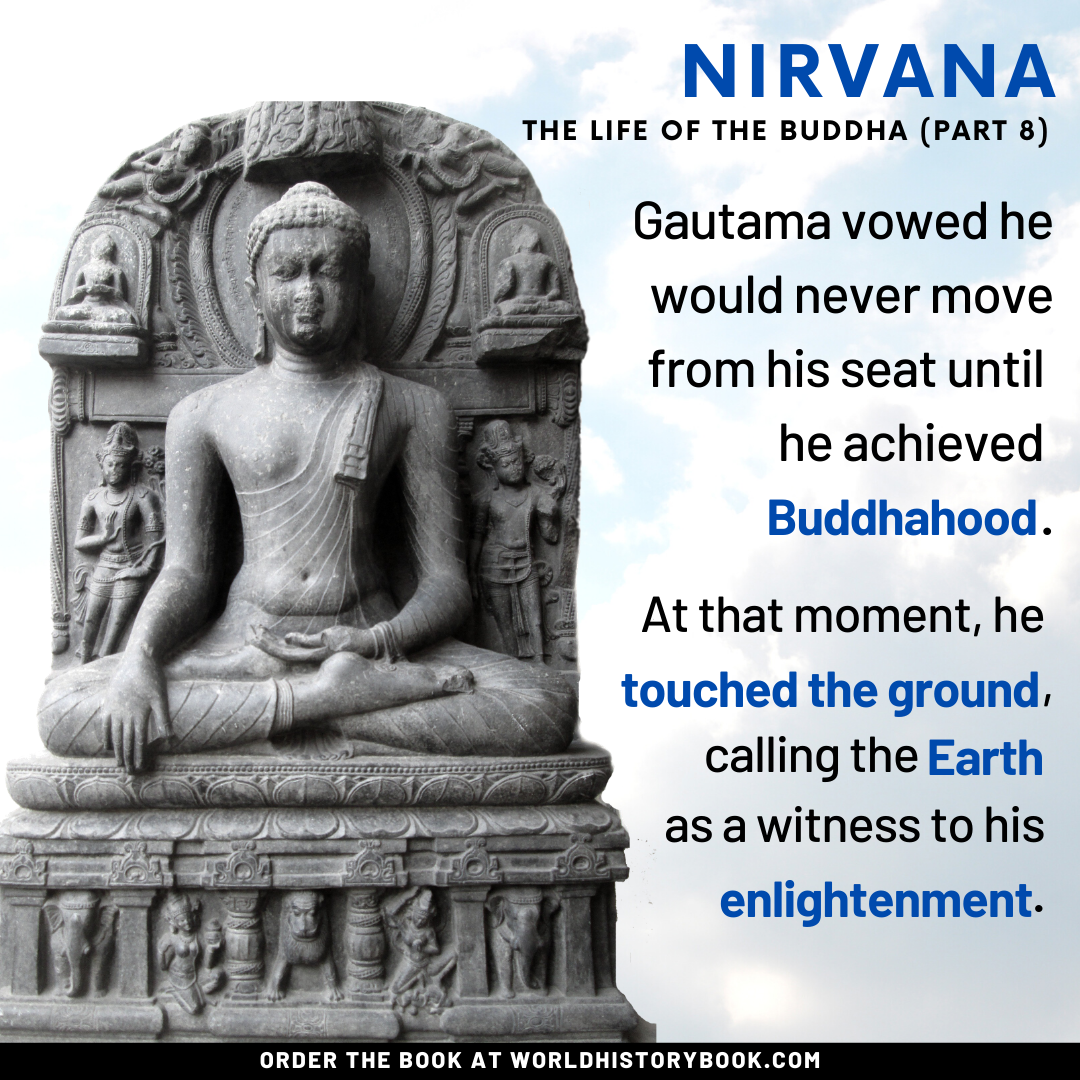