Augustine is the author of a masterpiece of literature known as The Confessions. It recounts his many years of struggle with faith, starting as a "sinful" youth and leading up to his conversion to Christianity.

Revolutionary for its time, The Confessions contains a lot of autobiographical material. Back in the day, people rarely put their private thoughts and feelings on paper, especially when they were embarrassing. His work showed the inner experience of individuals is worth talking about. As a result, the Confessions is often called the first introspective autobiography in history (although it doesn't have all aspects of a modern autobiography). 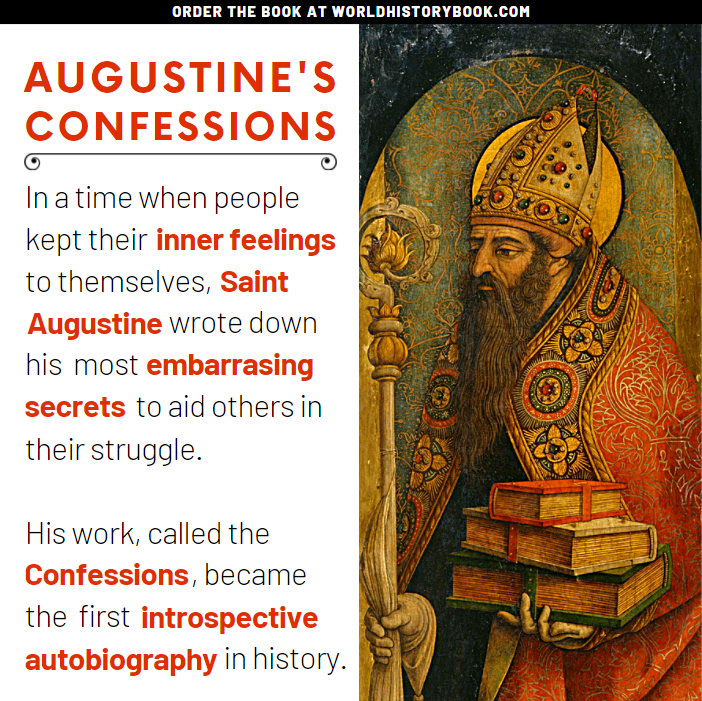 In The Confessions, Augustine is speaking directly to God. On various occasions, he claims to be relieved only God can read his words, for he'd be too embarrassed to reveal them to anyone else. For instance, he writes:

I enter my plea before your mercy, not before a fellow man, who might well mock me. Or do you, in fact, mock me?

This (imaginary) sense of privacy allowed him to speak freely. In an unprecedented way, it allowed him to "travel down into himself," which he managed to do with remarkable clarity and humility. 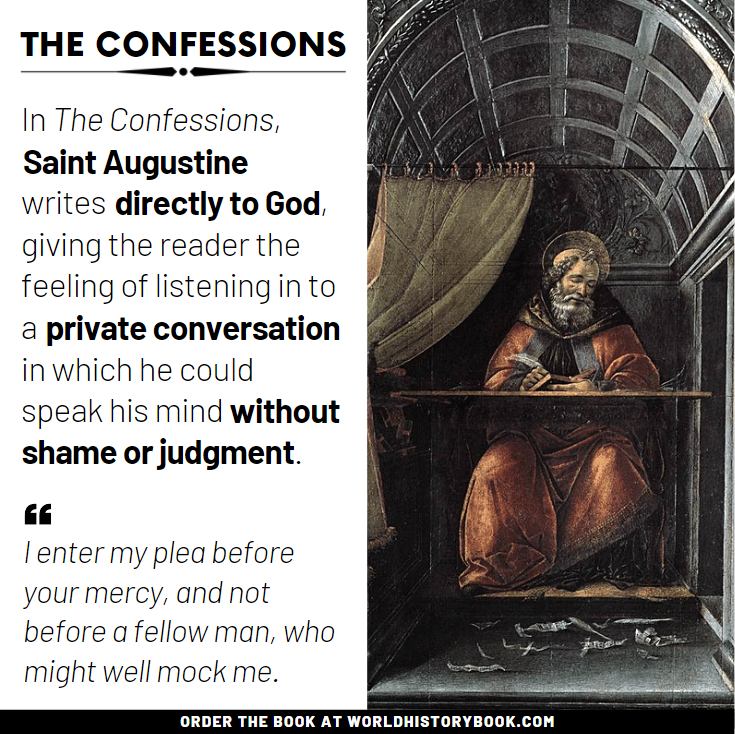 At 16, Augustine and his friends stole pears from a neighbor's tree. We might think of this as a boyish prank, but Augustine took it very seriously. He was especially concerned that he did it without being hungry and that the pears were "not enticing either in appearance or in taste." He even didn't remember whether he ate some or just gave them to the swine. Augustine saw these actions as a slippery slope that could lead to bigger problems in the future, when his influence in society would be bigger. Therefore, it was a sin in need of atonement. He wrote in full honesty:

Robbery is undeniably punished by your law, [and even a] robber will [not] calmly submit to being robbed. [...] Yet I desired to commit robbery, and did it. I was driven by no deprivation—unless by a deprivation of what is right. [I had] no motive for wrongdoing but its very wrongness. The act was ugly, and that is what I loved in it. 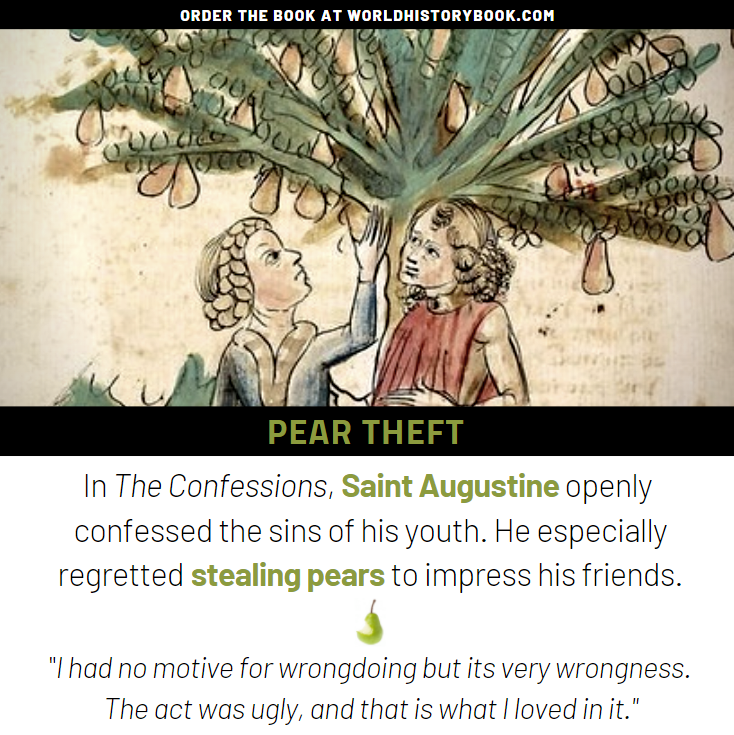 The first great step towards Augustine's conversion came when reading Hortensius, by the great Roman philosopher and statesman Cicero. This text, which has since been lost, awakened in him the search for eternal truths:

I reached a book by a man known as Cicero, whose tongue all praise [...]. This book [...] is known as Hortensius, and it changed my life. [...] I pined for a deathless wisdom. [...] I know longer read this book to acquire a speaker's polish. [...] I did not value it for its effect on style, since I was moved by what it said, not how it said it. [...] Philosophy means the love of wisdom, which that book instilled in me. 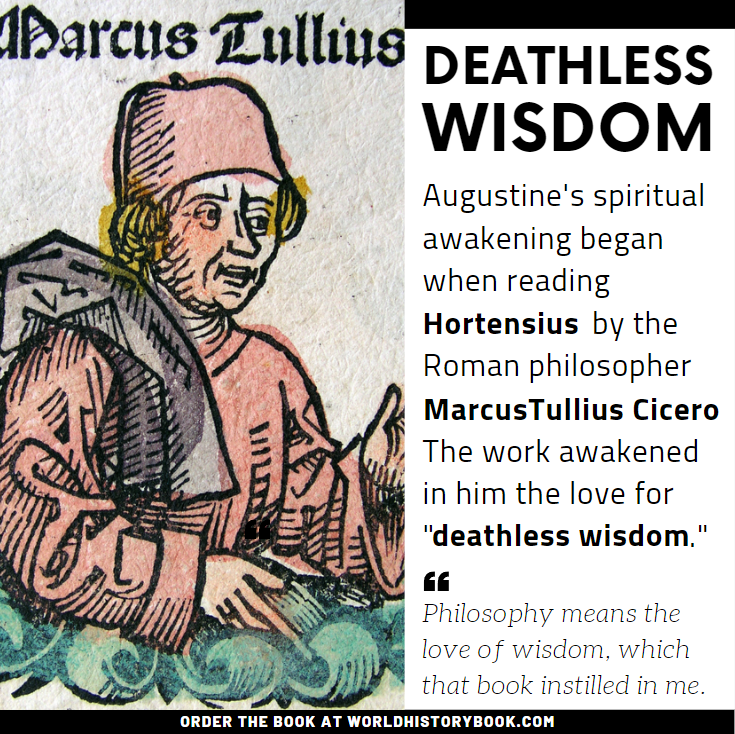 Augustine sought more answers with the Manichaeans, a sect originated by the Persian prophet Mani (3rd century AD). Mani's teachings were intended to succeed the teachings of Christianity, Zoroastrianism, and Buddhism. He stayed associated with them for almost 10 years. The Manichaean worldview also included a lot of astronomy, which was rejected by mainstream Christianity. Eventually, his study of the sciences made him doubt some of the astronomical claims of Mani. He wrote:

Now, I had been reading widely in the philosophers and turning over in my head what they said. When I matched them against the large imagined claims of the Manichaeans, I found them more successful in 'explaining the universe.' [The philosophers] predicted, years ahead, eclipses of the sun and moon, partial or total, down to the day and the hour, and their calculations turned out right. These points I contrasted with what Mani had so extensively written. [...] Belief was demanded in Mani's sayings, whereas rational method was used in the secular calculations, and evidence capable of visible proof. 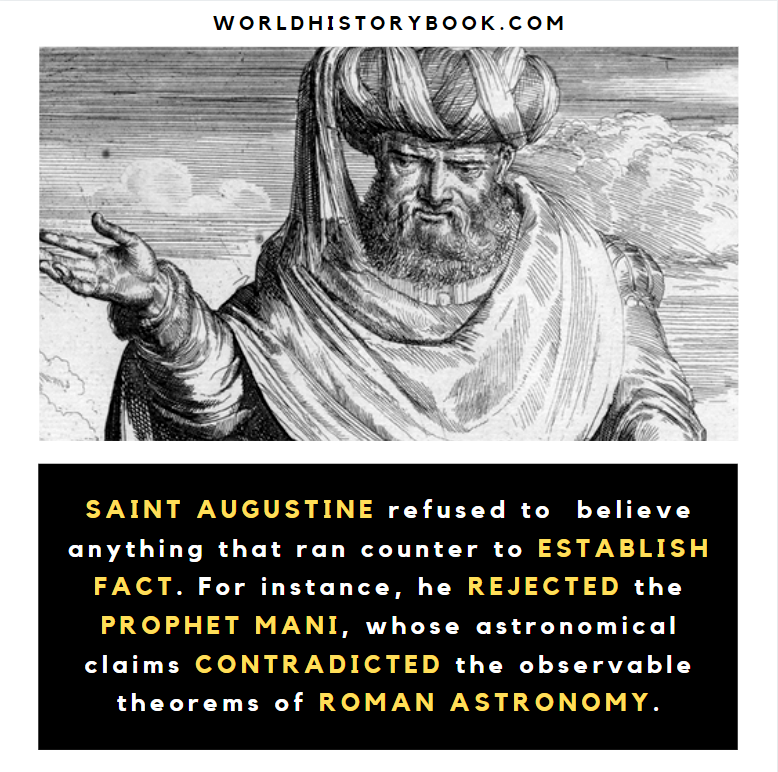 The Temptations of Saint Augustine

Augustine was also plagued by feeling of lust, and even found himself a mistress. They stayed together for over ten years and bore him a son, named Adeodatus. He wrote about their relationship:

I had in those years a woman who could not be called my lawful wife [...] but she was the only one, and I was faithful to her bed.

His sexual desires, he later came to believe, obstructed his relationship with God:

Your anger impended over me, but I was unaware of it, deafened by the clattering of my mortal chains. I wandered farther you. [...] You, the joy I was so slow to hear, said nothing as I ranged farther from you.

As a result, he prayed to God to have these feelings eliminated, but not too soon. Here we have the most famous line of the Confessions:

I used to pray to you for chastity, saying, "Grand me chastity and self-control, but please, not yet." I was afraid you would hear me too soon, heal me too soon, from my sick urges, which I wanted intensified rather than terminated. 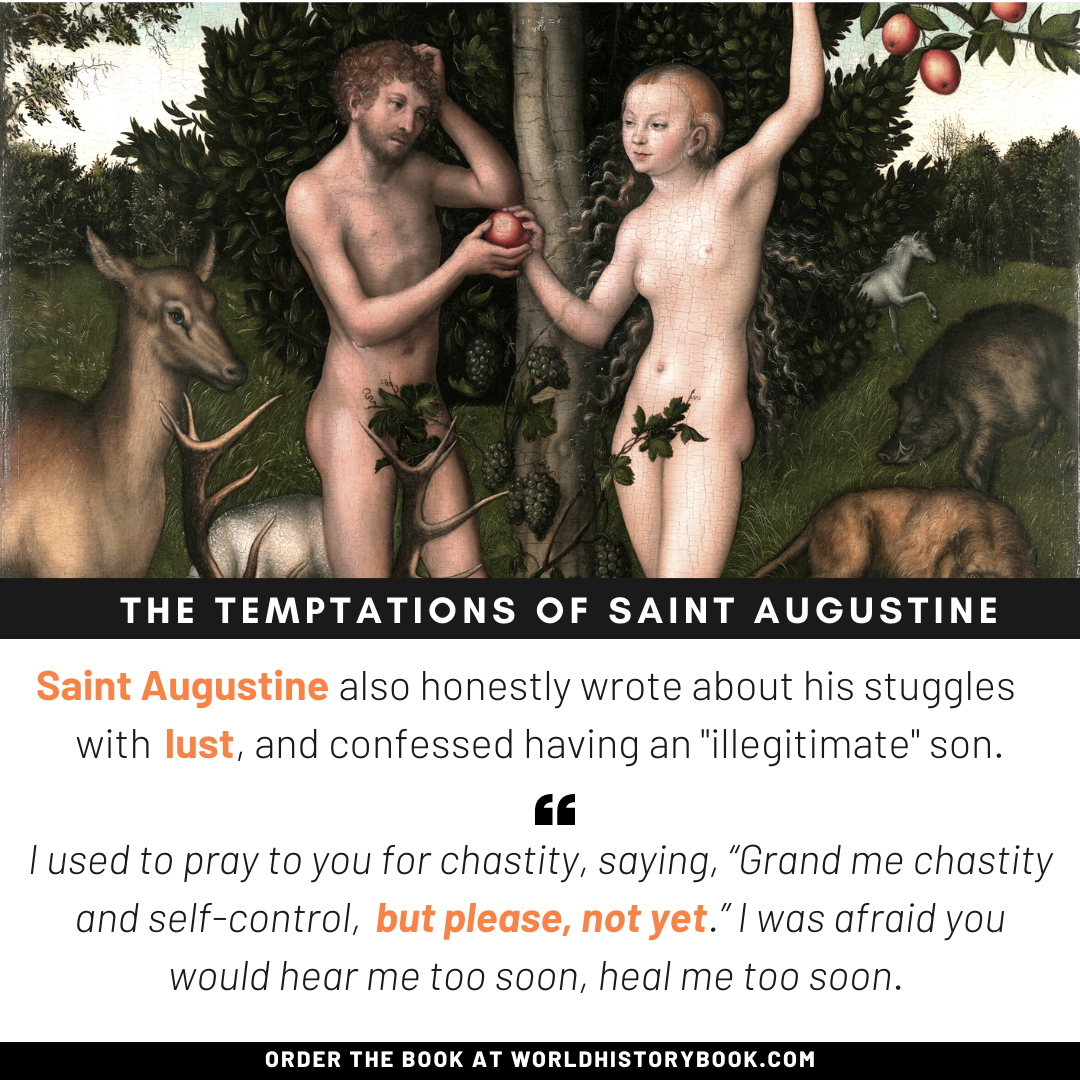 The Bible Versus Reason

Augustine saw a chance to work in Milan, in close association with Bishop Ambrose, "the bishop ranked among the best men in the world." He was more powerful than any of the weak popes of his day. Ambrose showed him that his Manichaean understanding of Christianity had been crude. He told him that Scripture should not be read literally where it contradicted established fact. There was no need to directly contradict reason. He wrote:

Where the literal sense seemed to present absurd things, a symbolic reading opened new meanings 'behind the veil of mystery'.

What was said was at least not unreasonable, but whether it was true I still had no way of knowing [...] I wanted a certainty about unseen things like my certainty that three and seven make ten.

He finally concluded that he didn't have this mathematical certainty in almost any aspect in life. At some point, we have to resort to belief if we want to succesfully operate in the world. 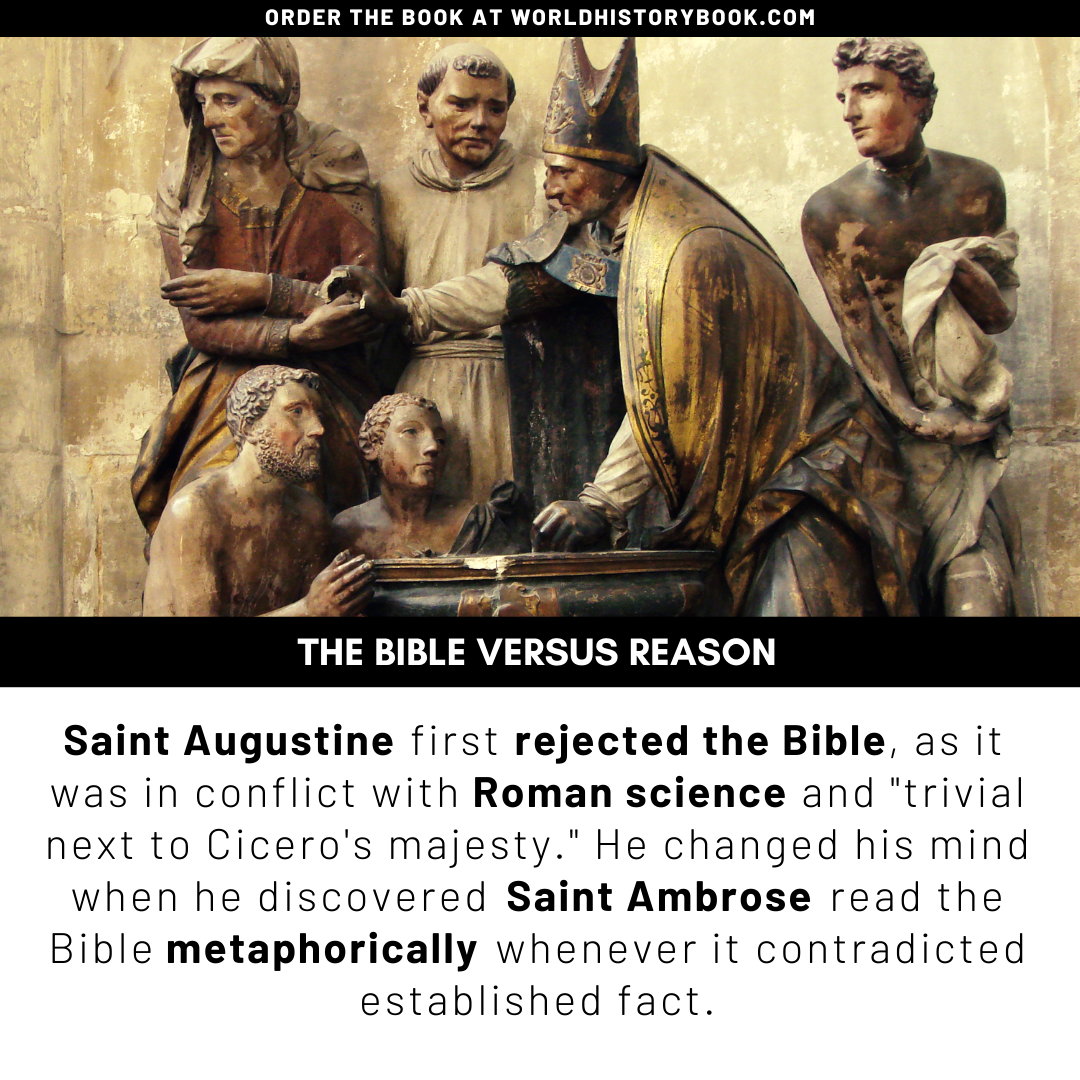 Take up and Read

Feeling his conversion drawing near, Augustine went with his friend to a private garden for some privacy. Hear he experienced something close to a mental breakdown:

By looking thus deep into myself I dragged from my inmost hiding places an entire store of pitiable memories and laid them out for my heart to see. A vast storm hit me at this point, and brought great sheets of showering tears.

And then something happened:

I heard from a nearby house the voice of a boy—or perhaps a girl, I could not tell—chanting in repeated singsong: "Take up and read." My features relaxed immediately while I studied as hard as I could whether children use such a chant in any of their games. But I could not remember ever having heard it. No longer crying, I leaped up, not doubting that it was by divine prompting that I should open the book and read what first I hit on.

I rushed back to were Alypius was sitting, since I had left the book of the Apostle when I moved away from him. I grabbed, opened, read: 'Give up indulgence and drunkenness, give up lust and obscenity, give up strife and rivalries and clothe yourself in Jesus Christ the Lord, leaving no further allowance for fleshy desires.'

The very instant I finished that sentence, light was flooding my heart with assurance, and all my shadowy reluctance evanesced.

His conversion was complete. 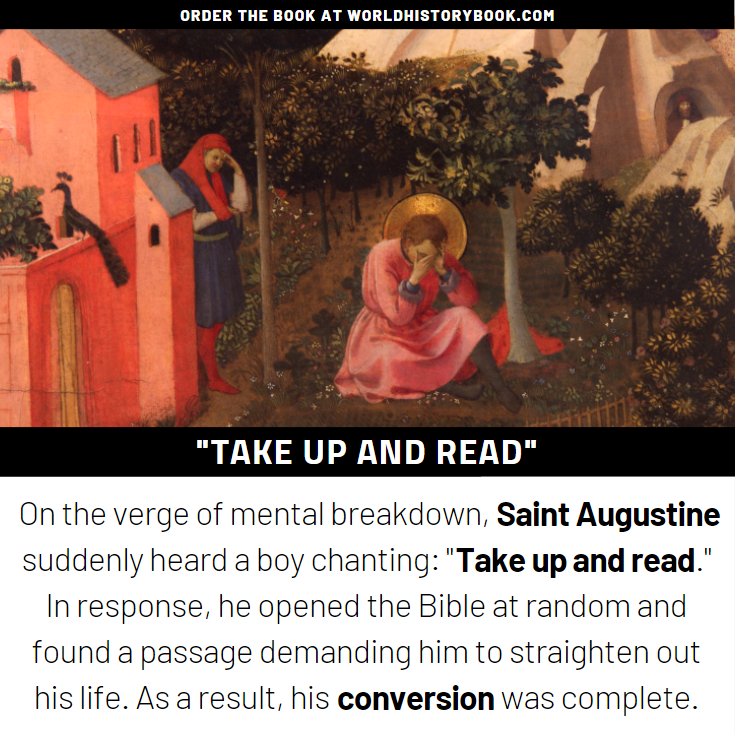