The Truth about Aladdin

Some posts about the Arabian Nights coming up! The Arabian Nights, also known as the 'Book of the Thousand and One Nights', is a large collections of stories from the Arabic world during the Middle Ages. It was once believed that Alladin was part of these stories, but it was later discovered to be a much more recent story that was added to the Arabian Nights by a French archeologist. 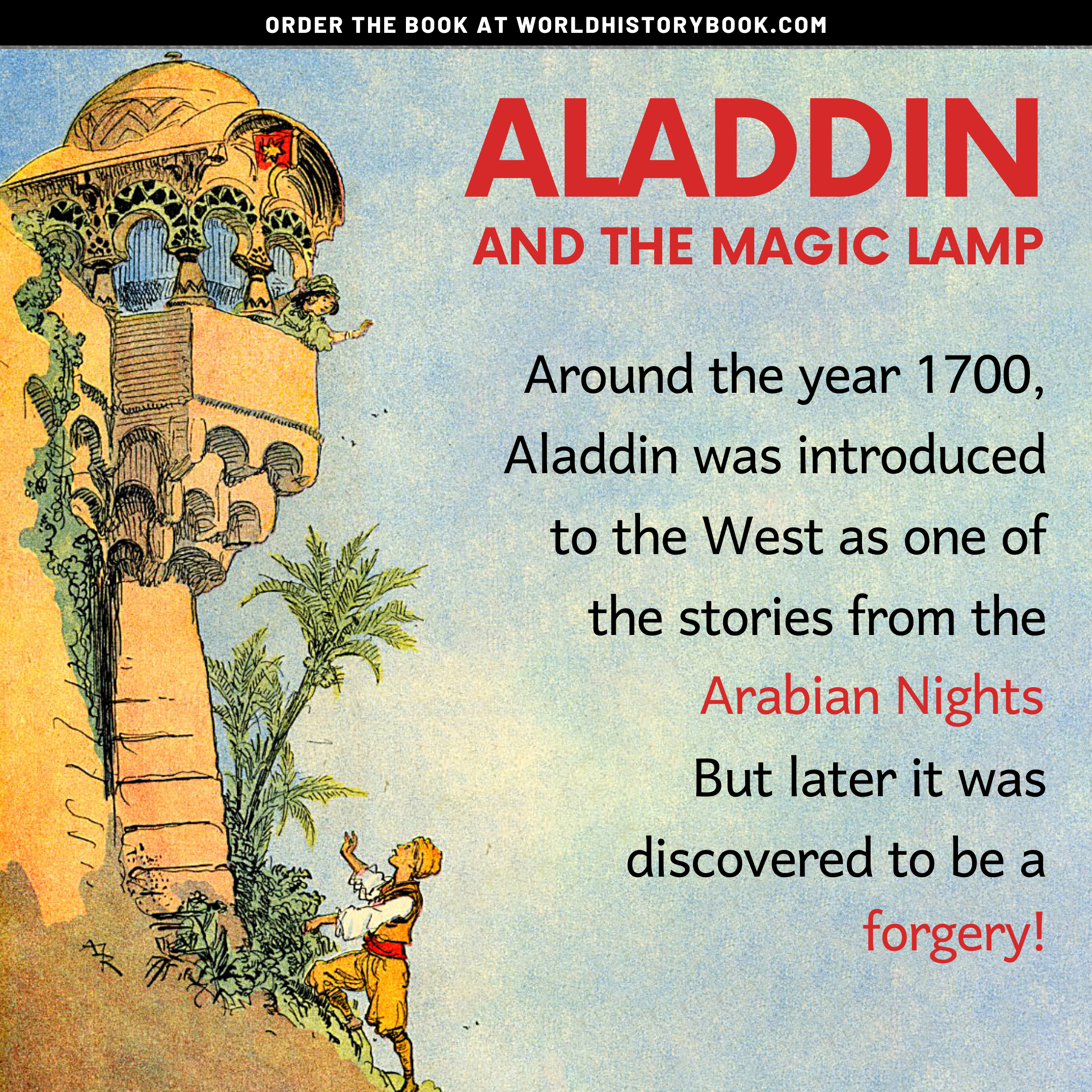 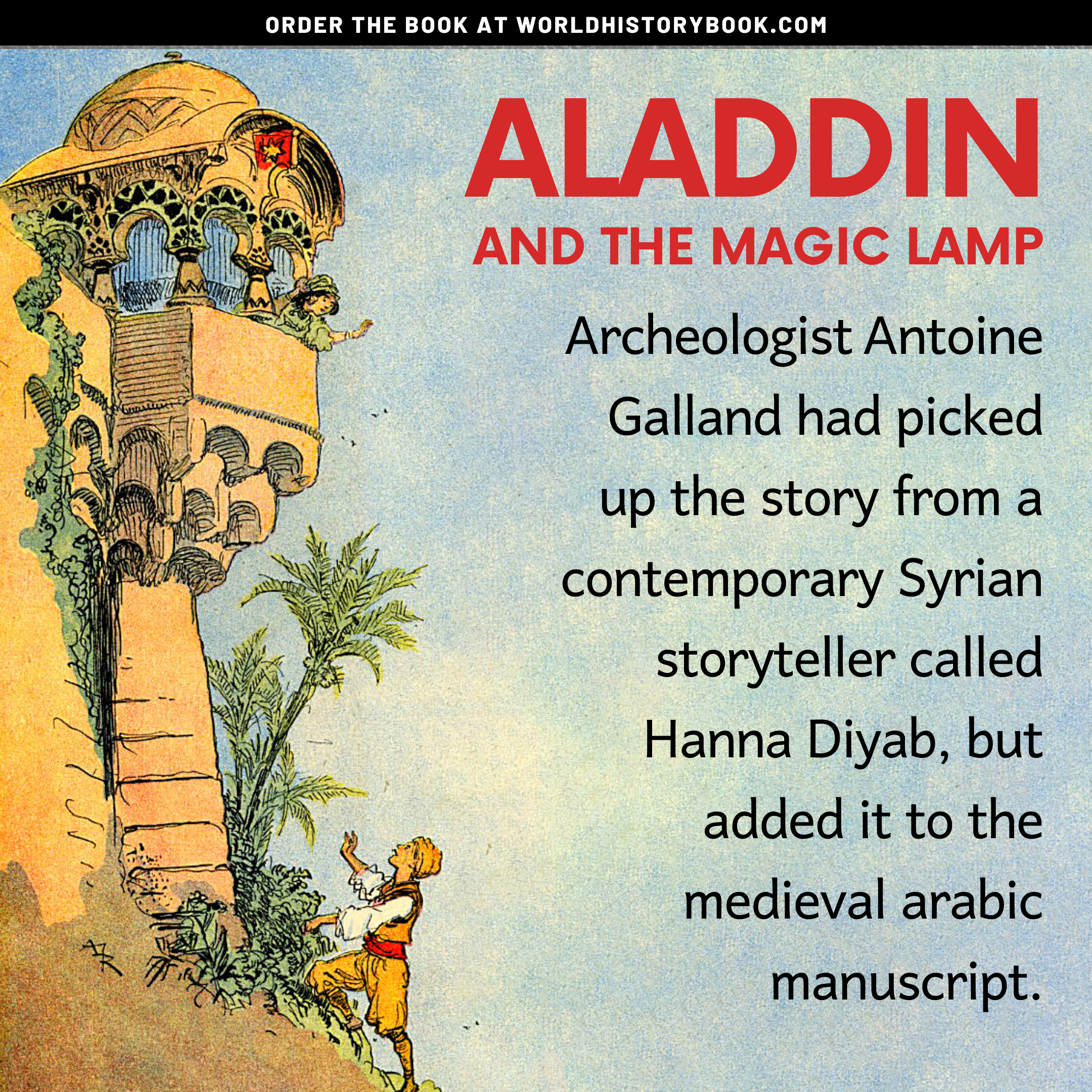 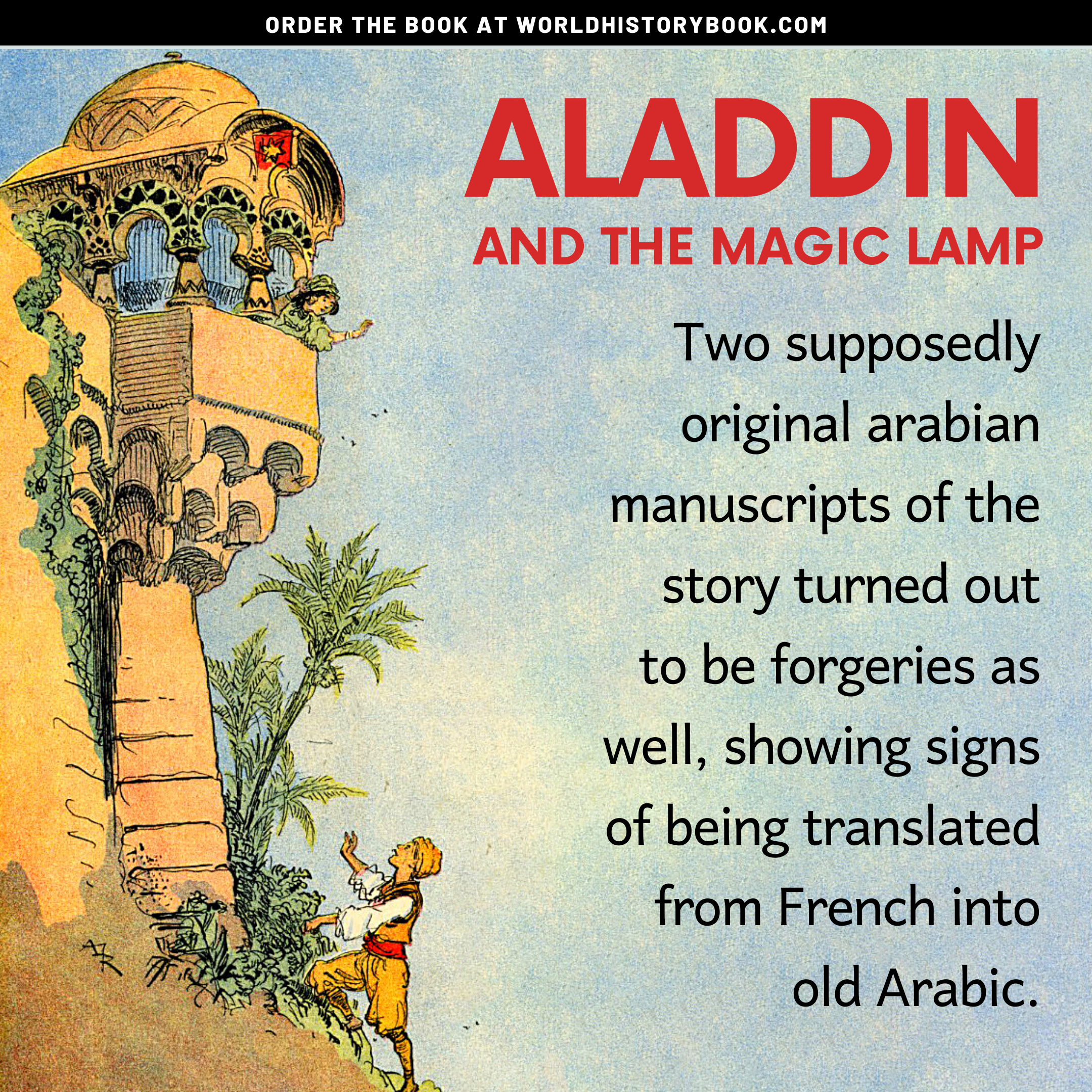 In the original story, Aladdin was described as a young man living in China. Although Aladdin clearly is an Arabic name and although the story was picked up in Syria, the writer decided to situate Aladdin in China. Don't believe me? Google for the original text and read the first sentence: "Once upon a time there lived in a certain city of China an impoverished tailor who had a son called Aladdin."

At the beginning of the story, a sorcerer, claiming to be his uncle, promised to make the boy a wealthy merchant. Instead, he used Aladdin to retrieve a magical oil lamp from a cave of wonders. 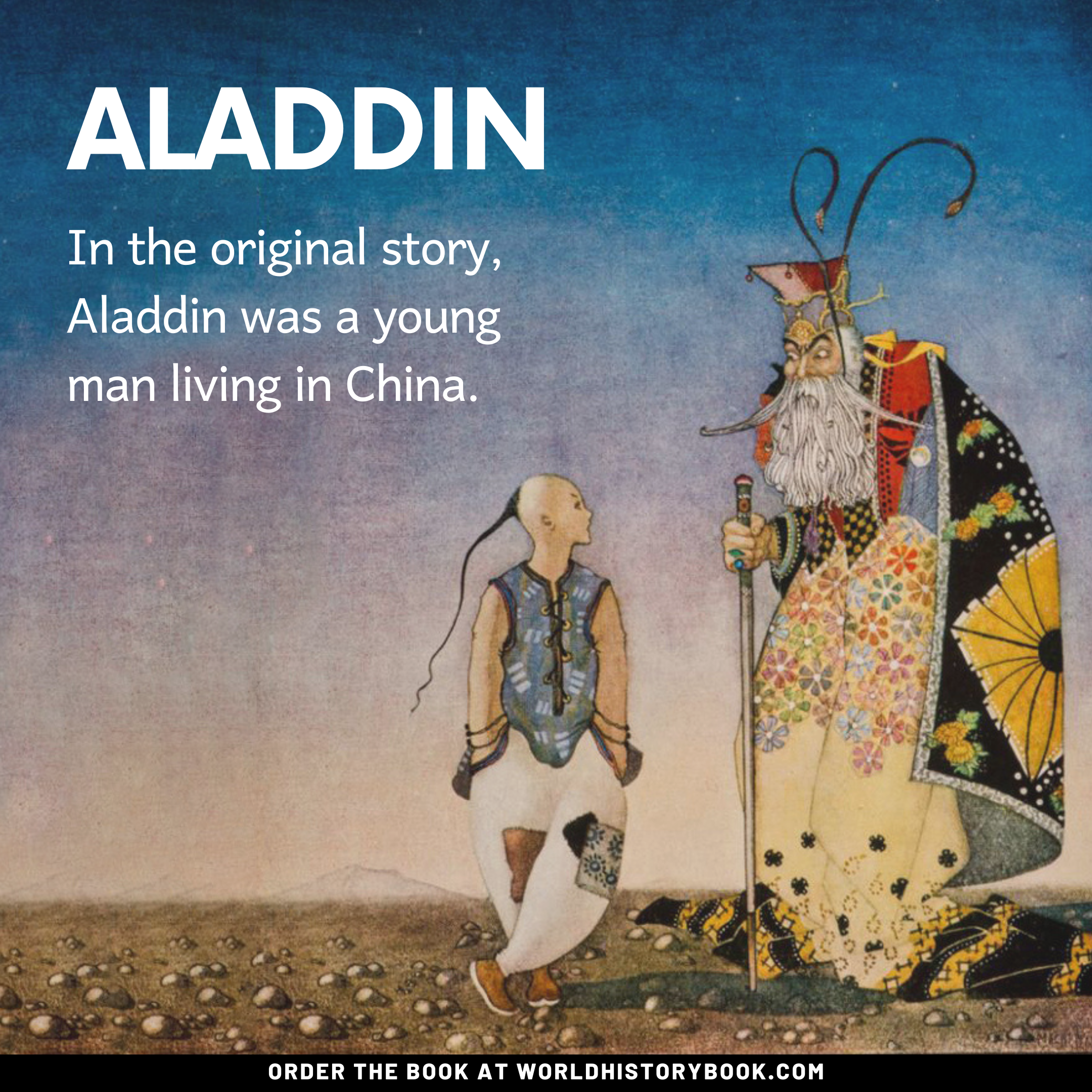 The Cave of Wonders

Aladdin was tricked by a sorcerer who pretended to be his uncle and promised to make him a wealthy merchant. In reality, however, he needed Aladdin to retrieve a magical oil lamp from a miraculous cave of wonders. 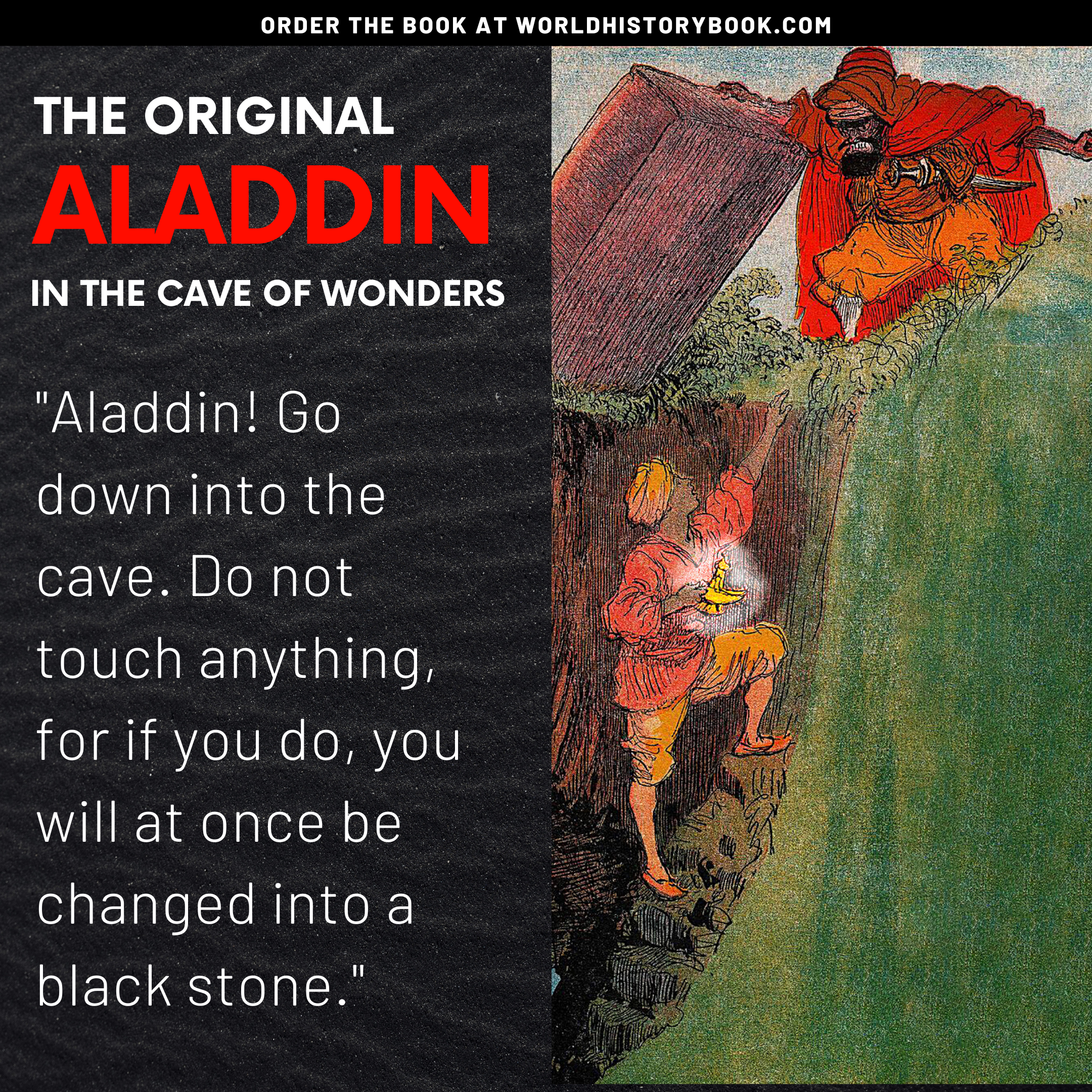 The Cave of Wonders (II)

Aladdin was told told not to touch any of the diamonds until he had reached the lamp. On his way back he was allowed to fill his pockets, but this made him so heavy that he had trouble getting out of the cave or even reaching over to give the lamp.

Believing Aladdin was trying to keep the lamp for himself, the evil sorcerer casted a magical spell out of anger, sealing the door of the cave and locking Aladdin inside. 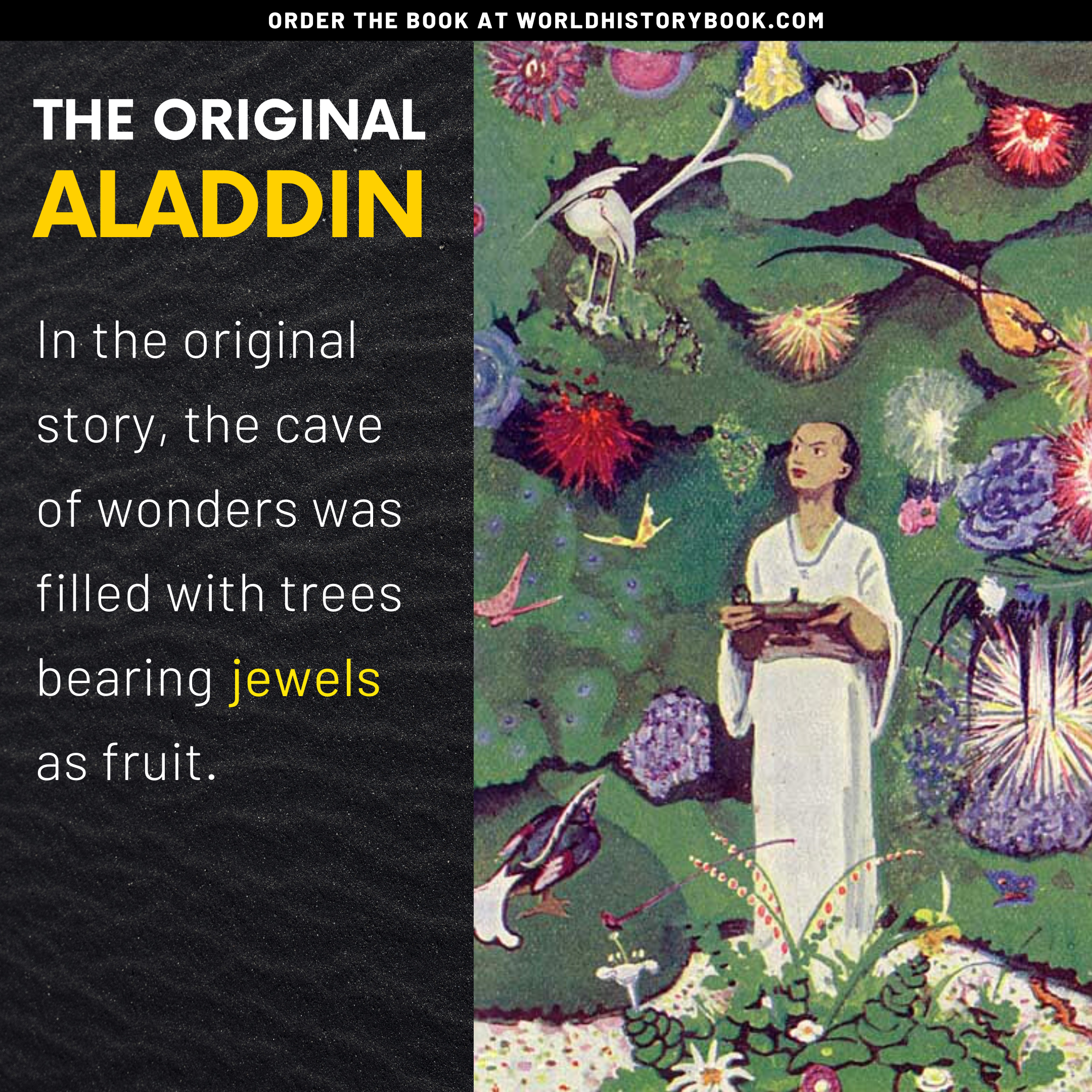 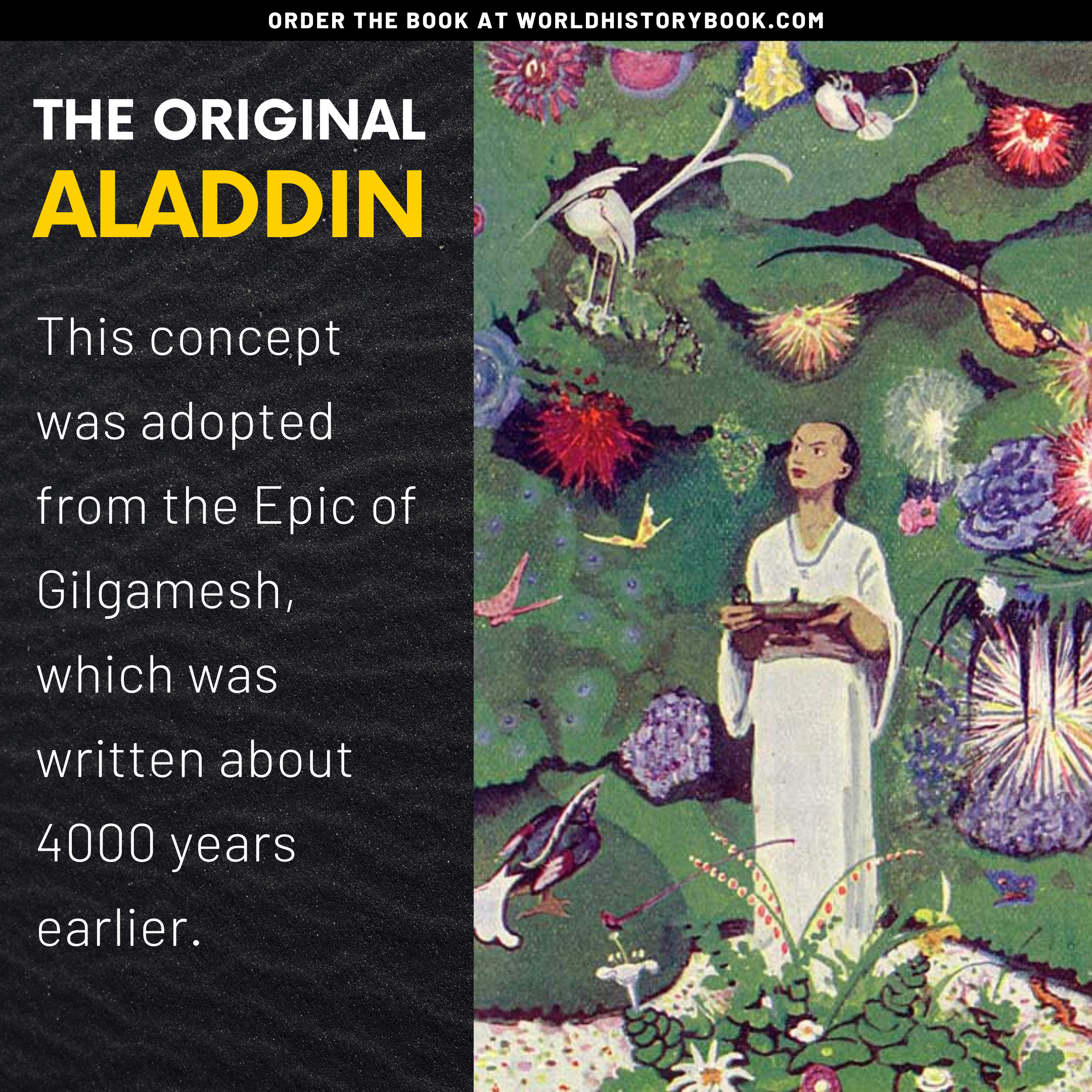 The Genie of the Lamp

There were two genies instead of one in the original aladdin and no flying carpet. 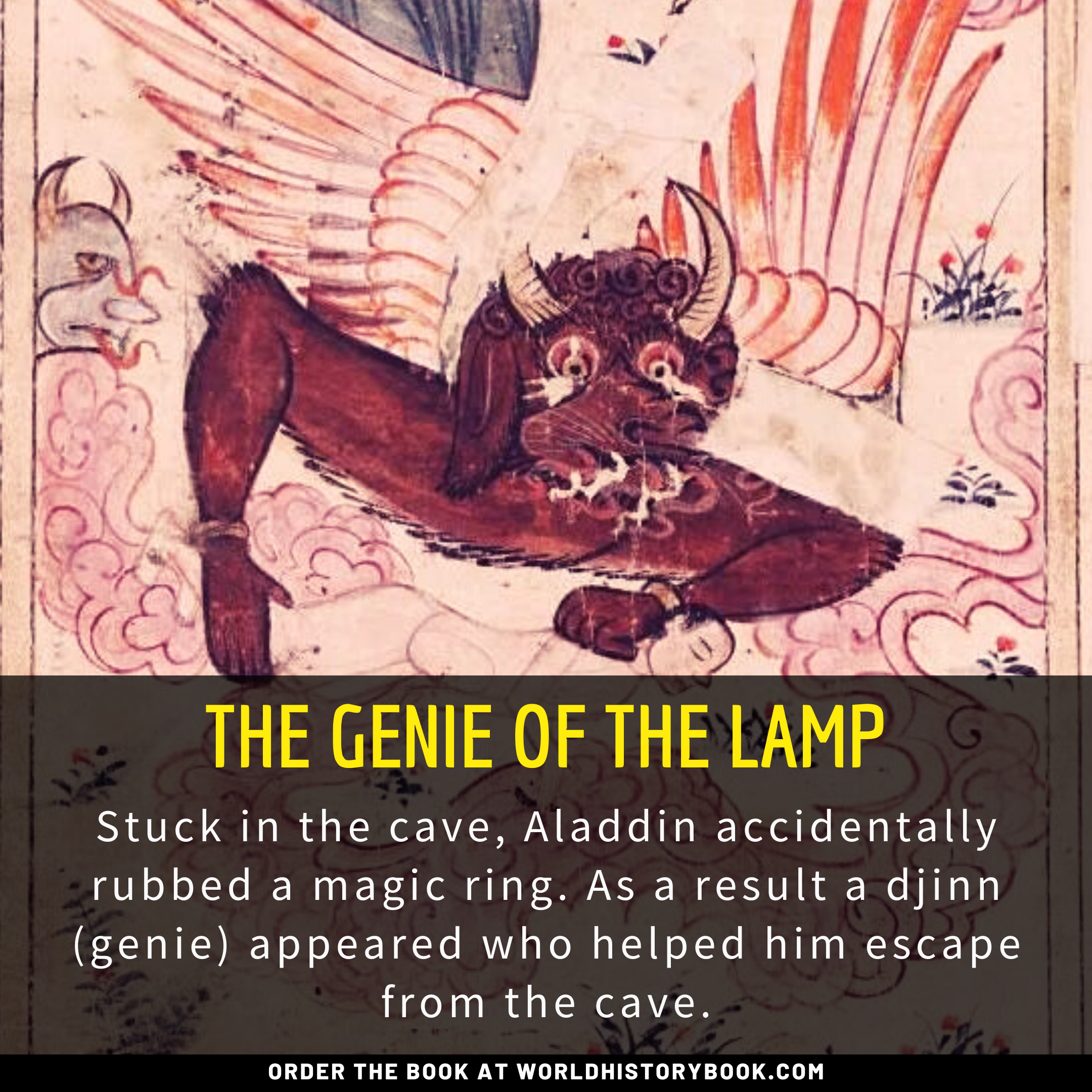 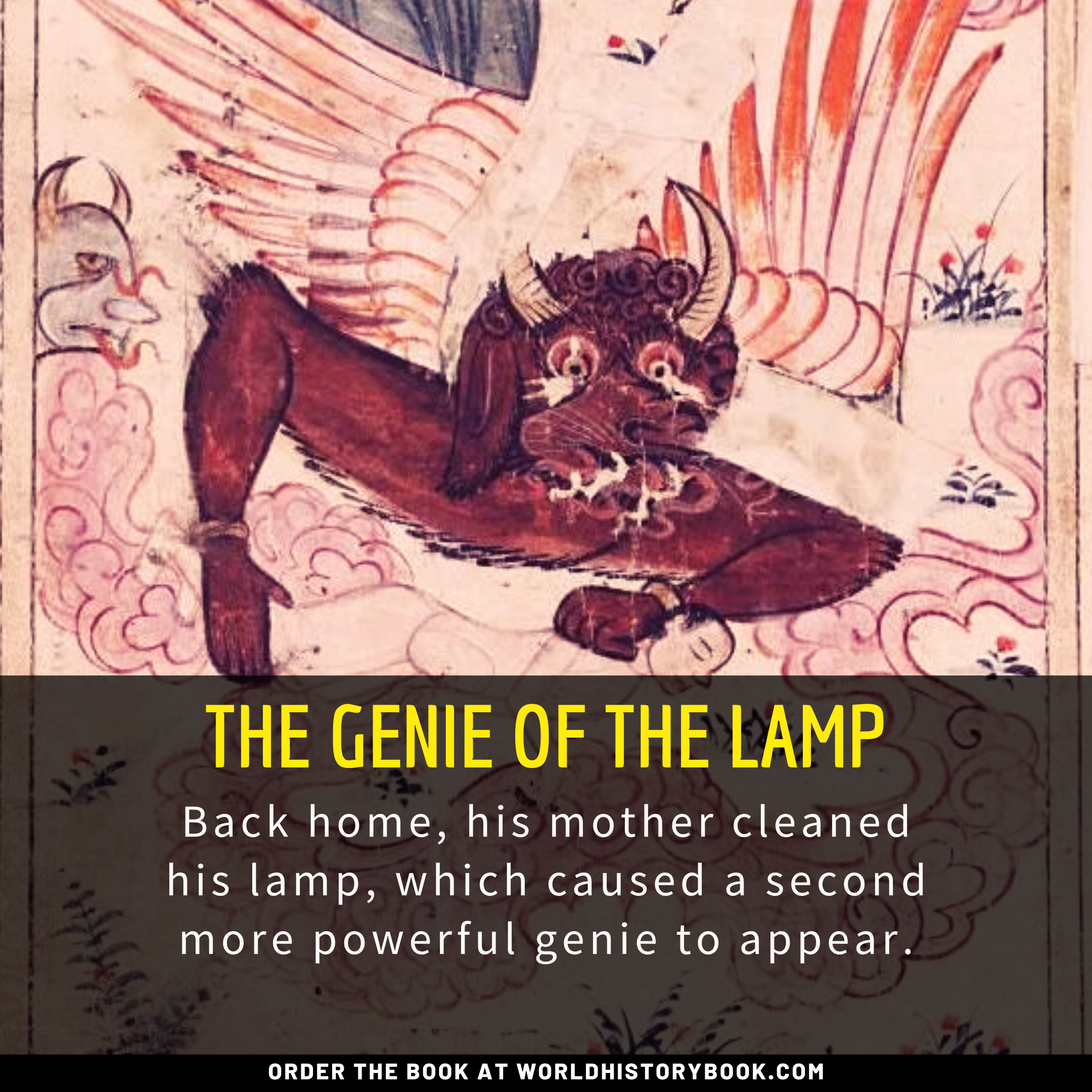 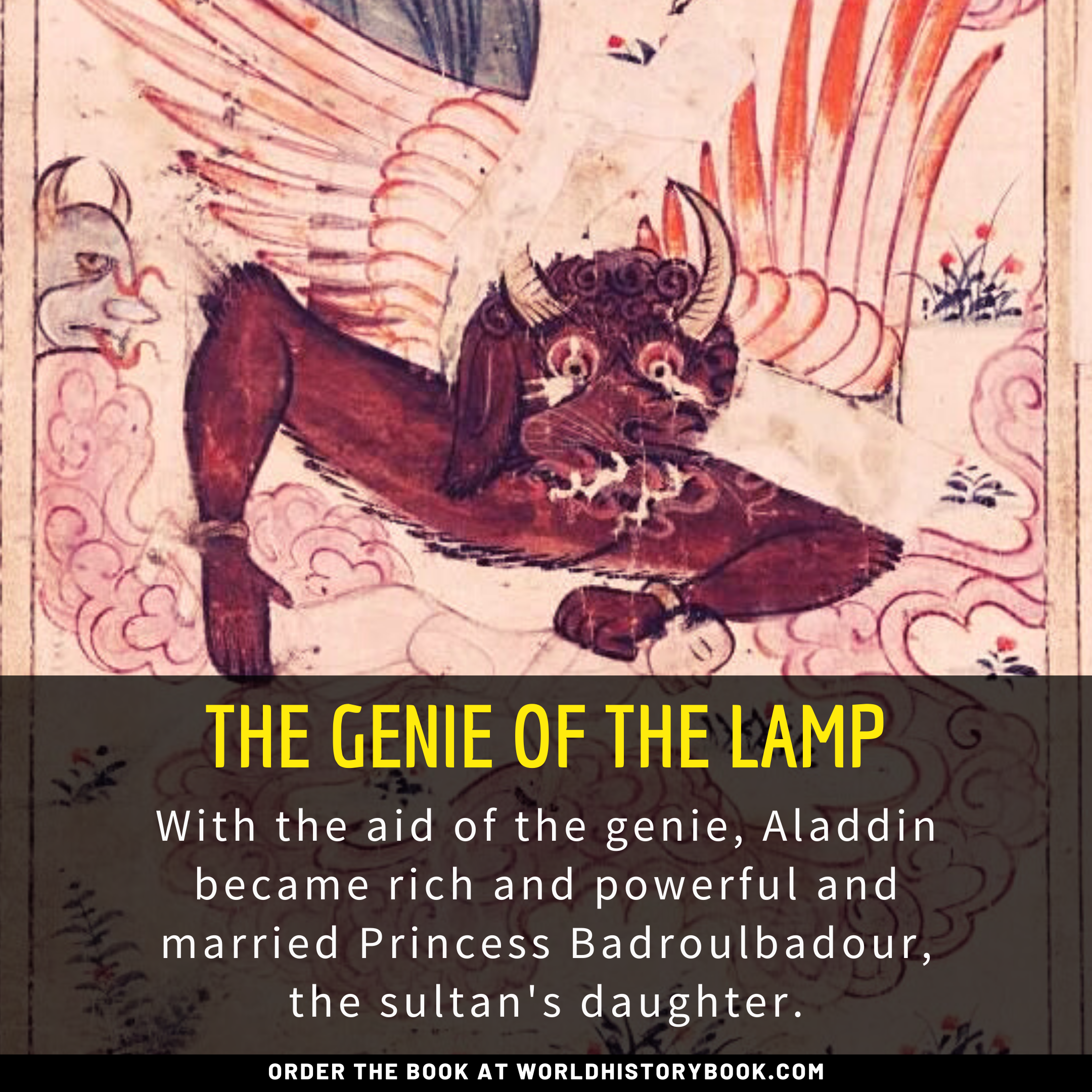 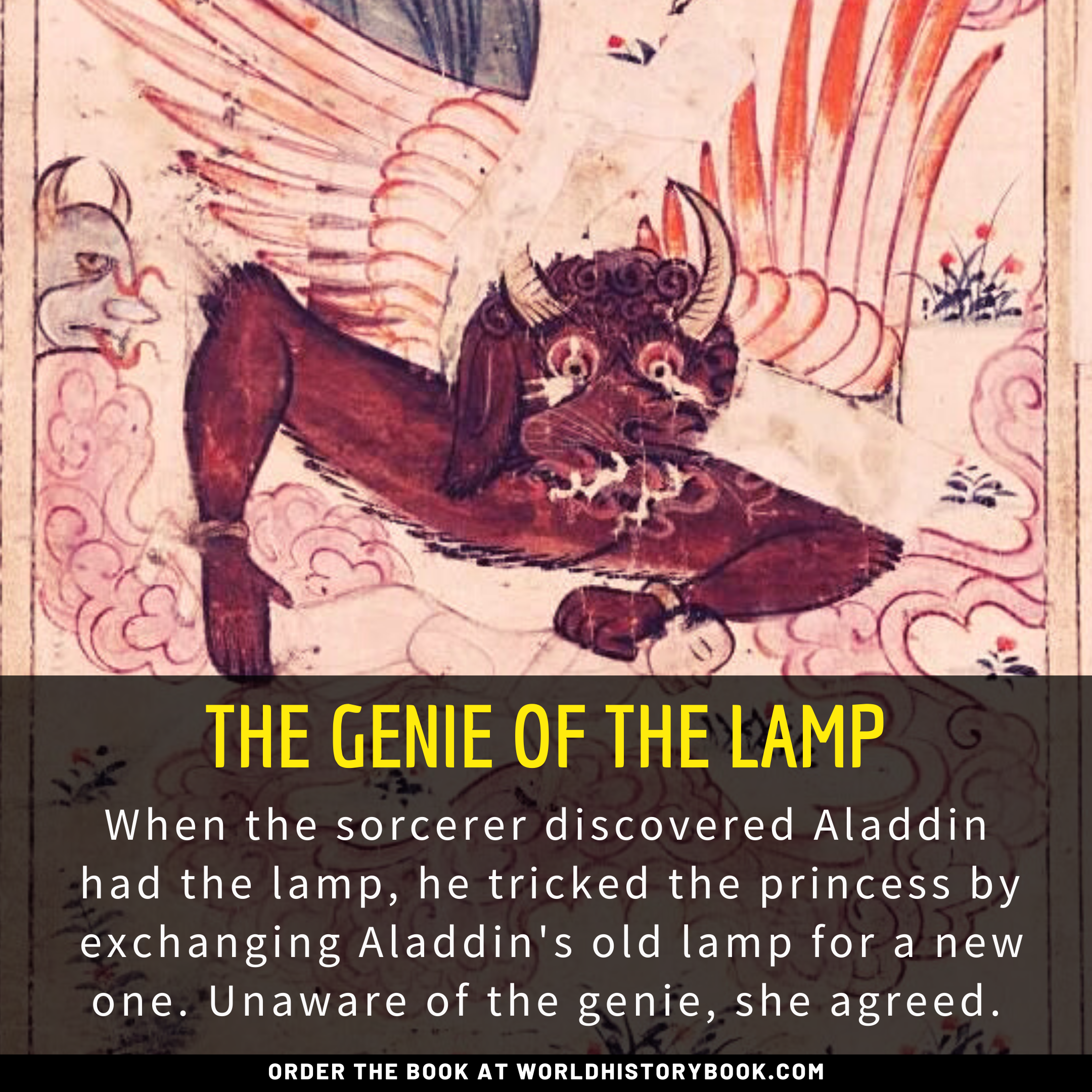 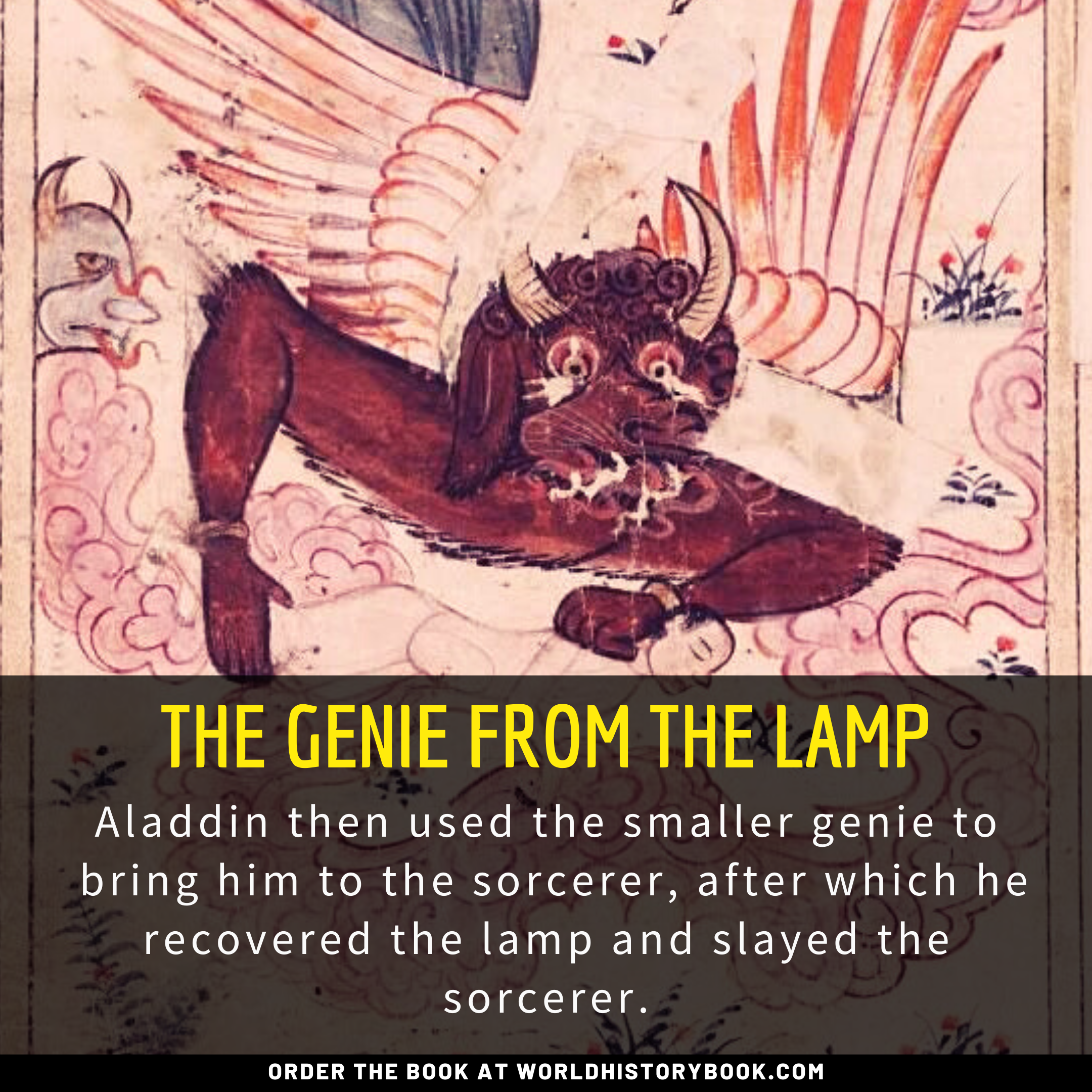 Time to tell you all about the One Thousands and One Nights, a collection of stories from medieval Islam. The star of the story is an intellectual woman named Scheherazade:

'Scheherazade had read the books, annals, and legends of preceding Kings, and the stories, examples, and instances of bygone men and things; indeed it was said that she had collected a thousand books of histories relating to antique races and departed rulers. She had read the works of the poets and knew them by heart; she had studied philosophy and the sciences, arts, and accomplishments; and she was pleasant and polite, wise and witty, well read and well bred.'

Also, be aware that many stories from the Arabian Nights are politically incorrect and sometimes downright immoral. These weren't fairytales for children. I do like to present these stories historically accurate, so we can judge their worth fairly, both the good and the bad. 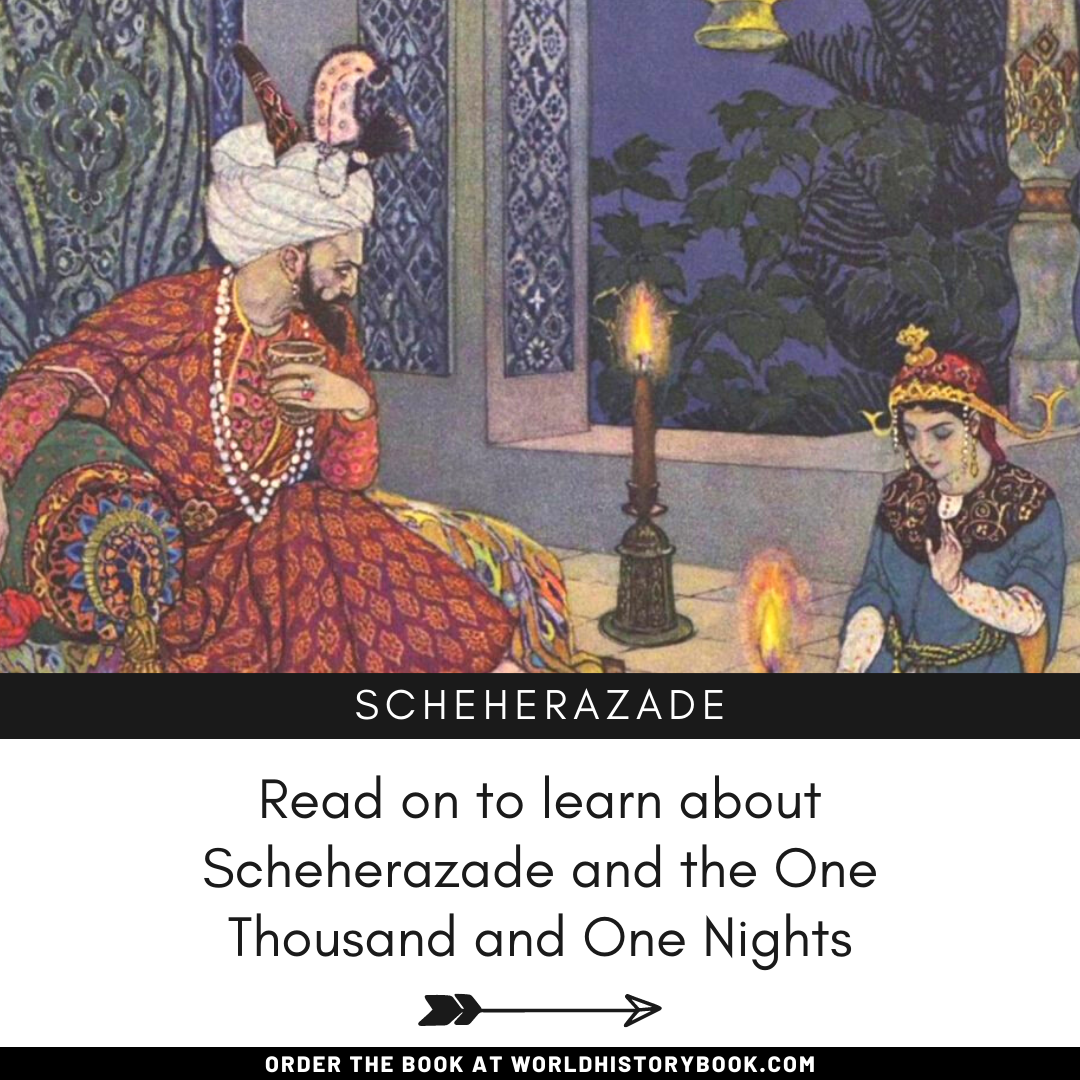 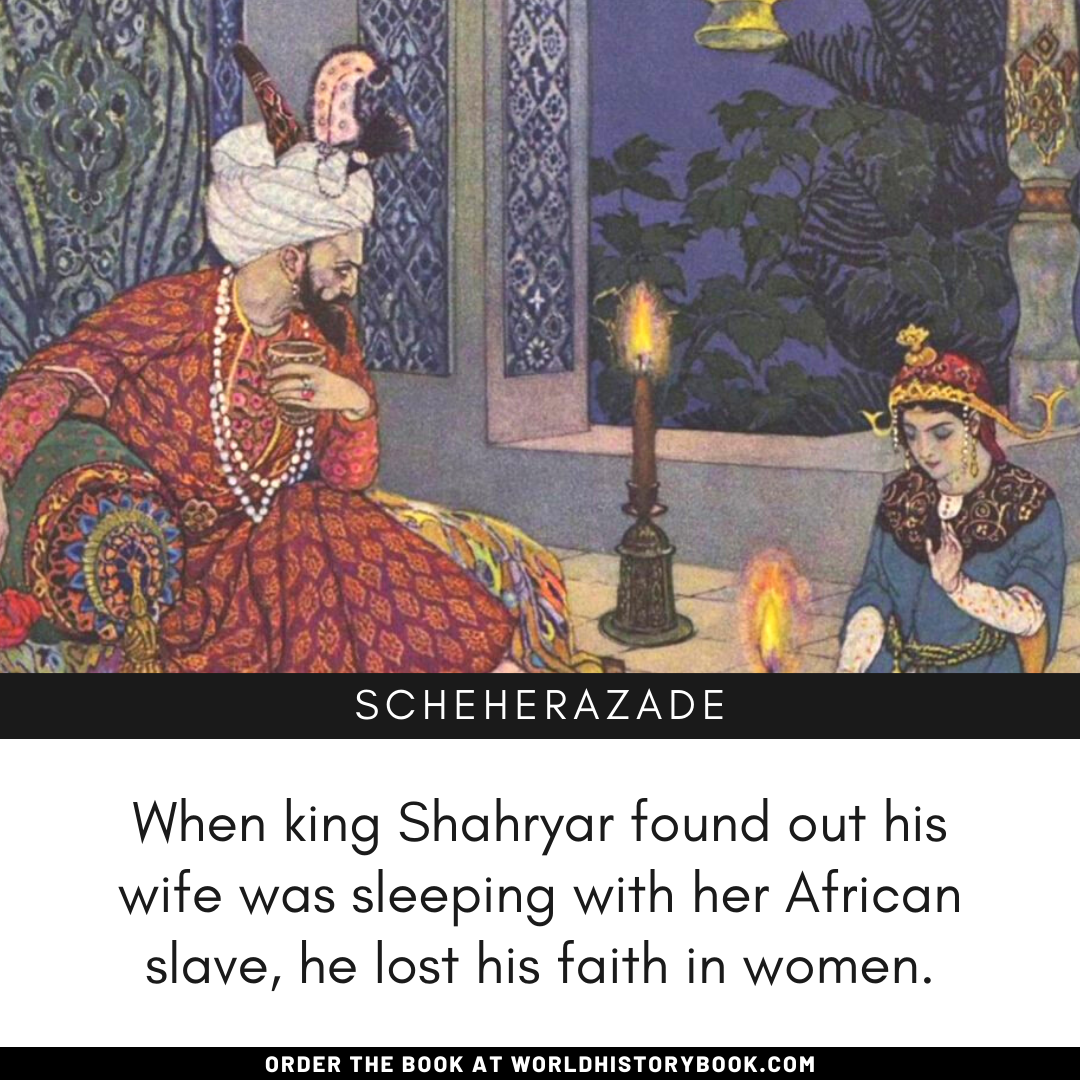 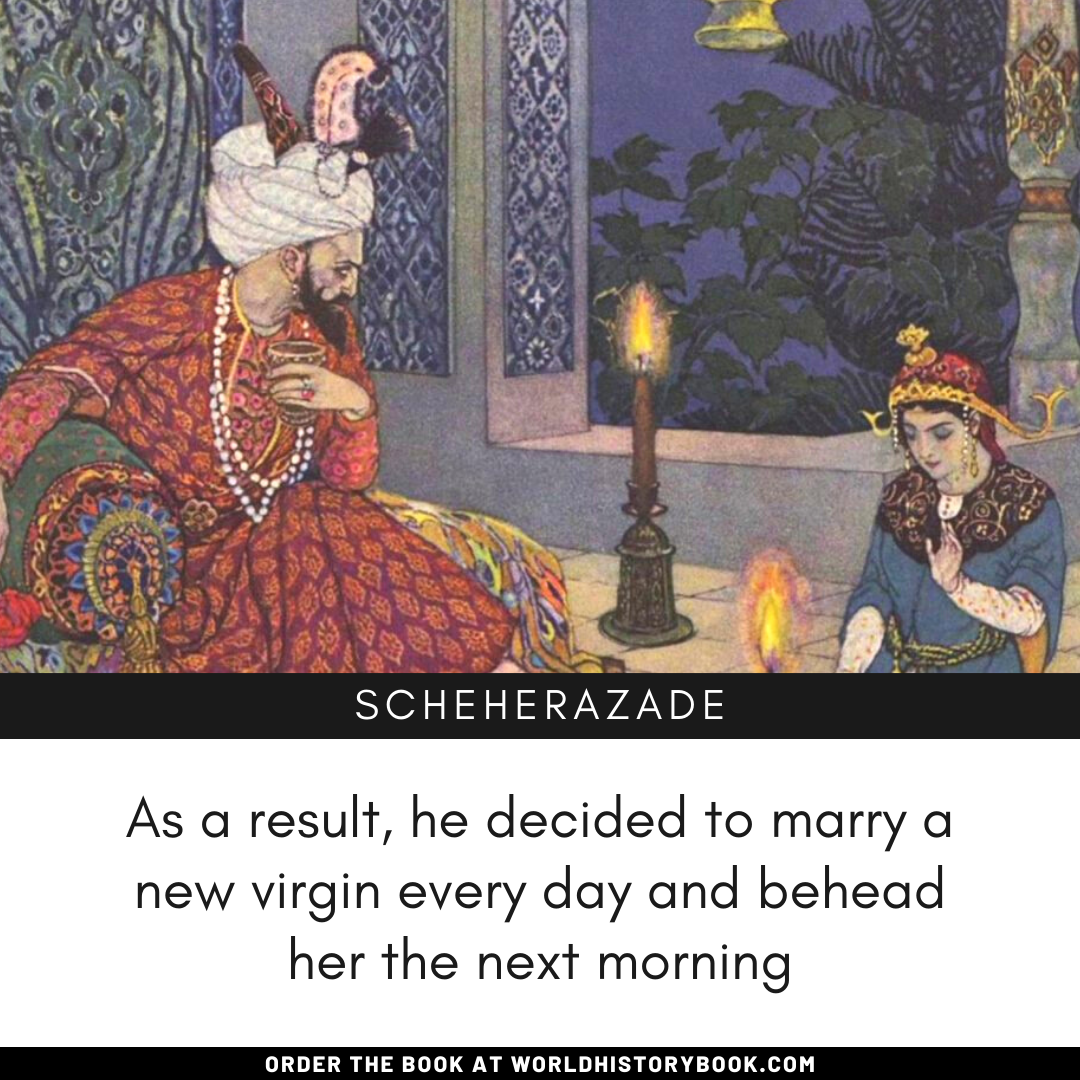 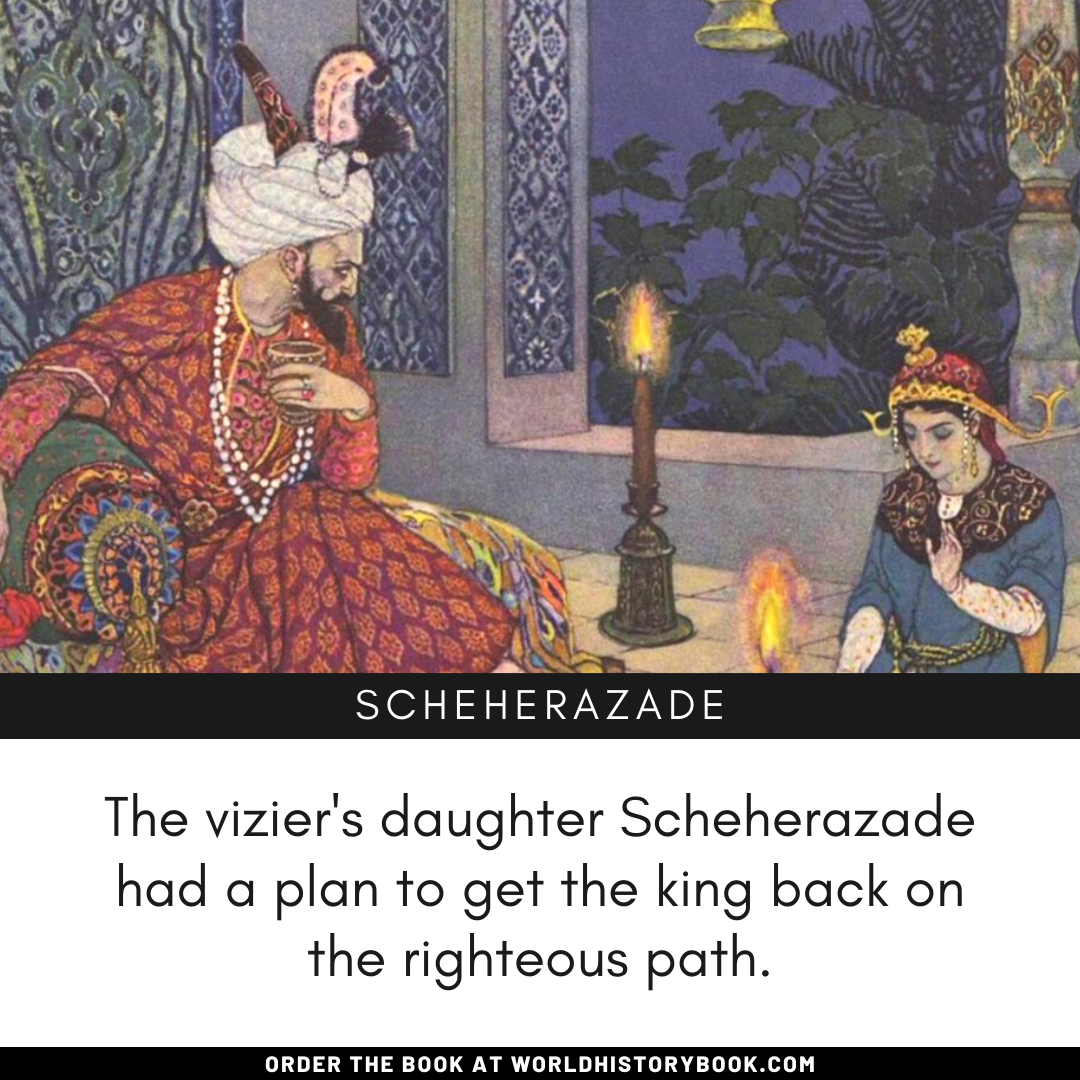 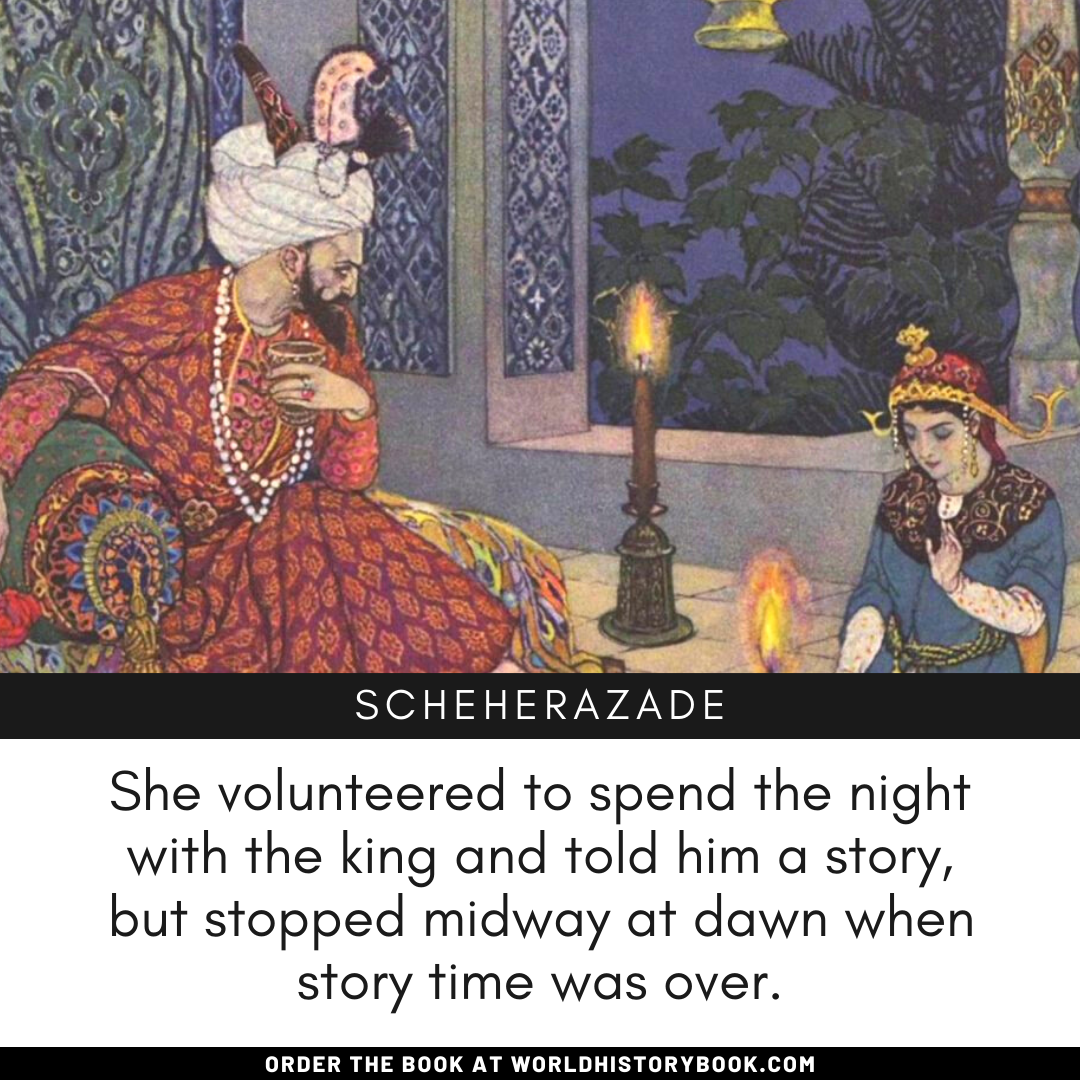 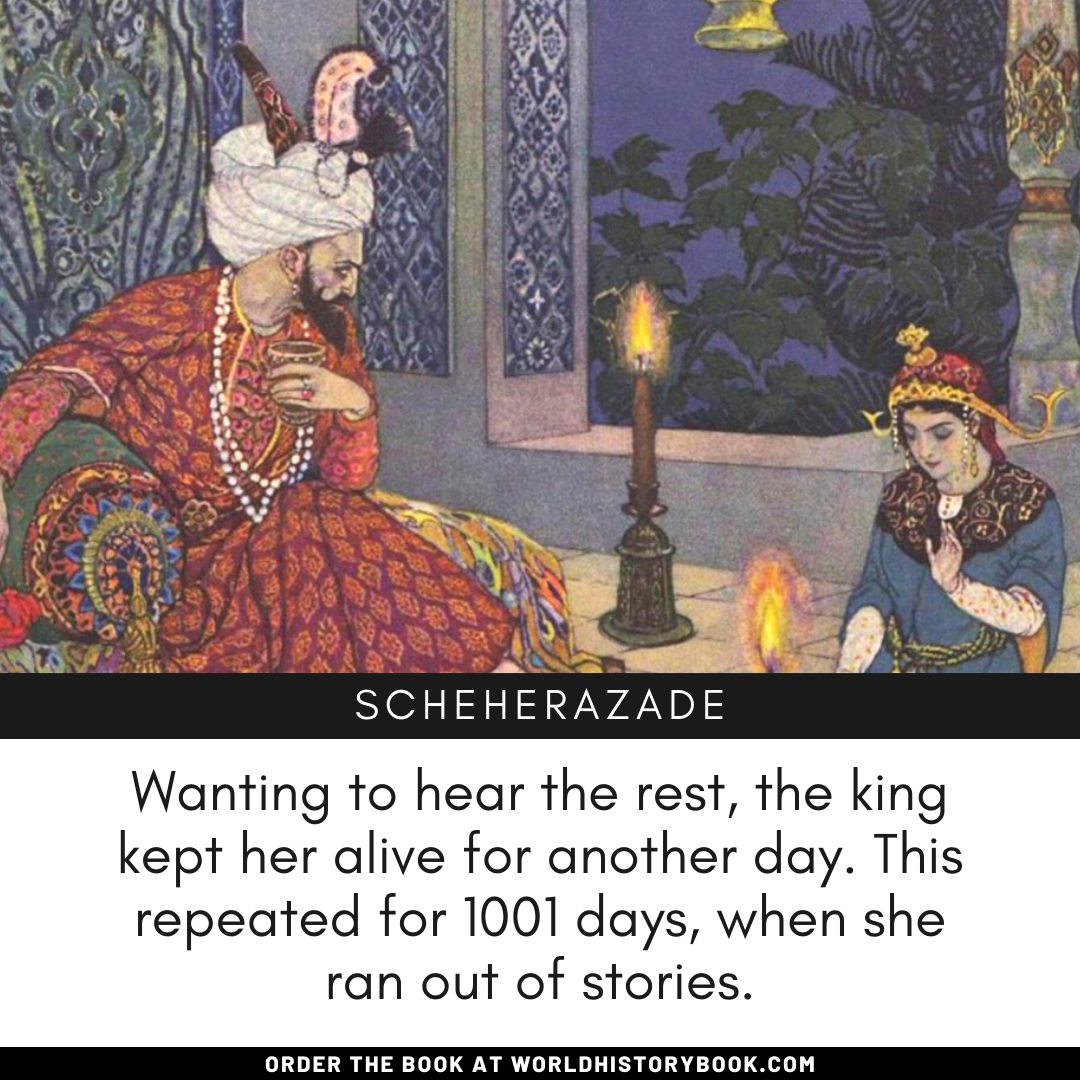 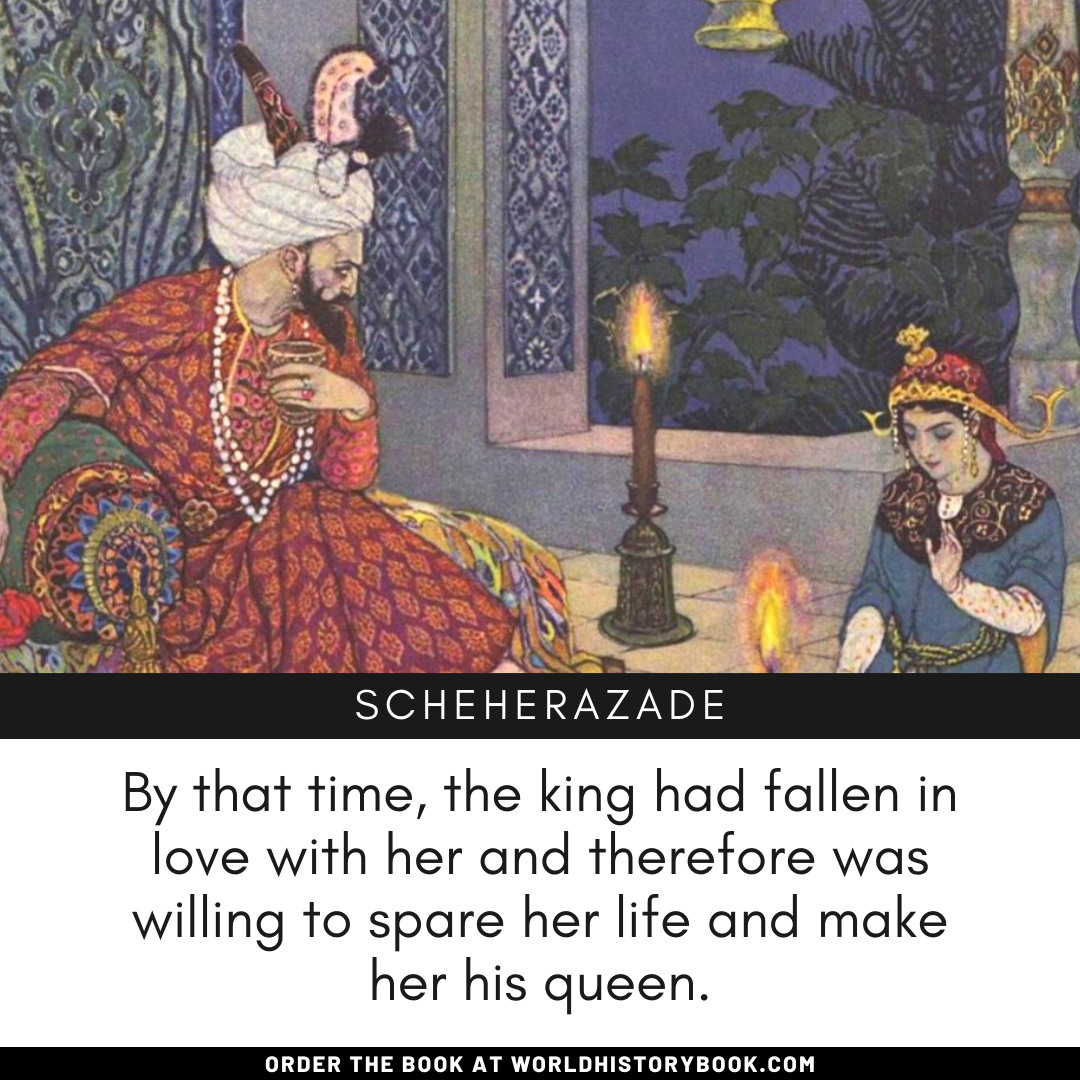 The Fisherman and the Djinn

In one story from the 1001 Nights, a fisherman finds a genie magically sealed in a copper container. Opening the seal, the genie appeared amidst large amounts of smoke. When he discovered the demon was planning to kill him, the fisher tricked the genie by asking him to prove he could truly fit inside such a small jar, after which he returned the seal and dumped the jar back into the sea. 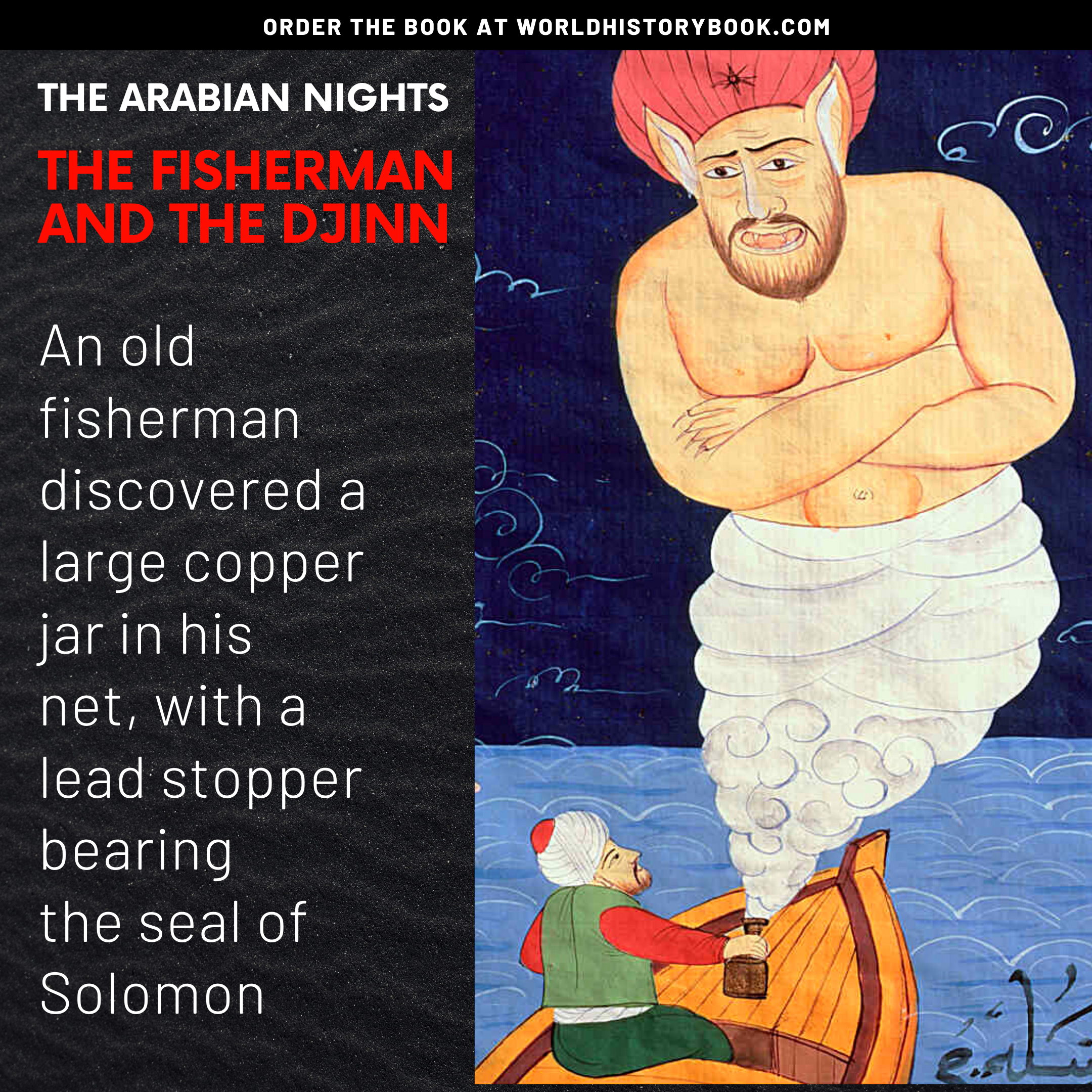 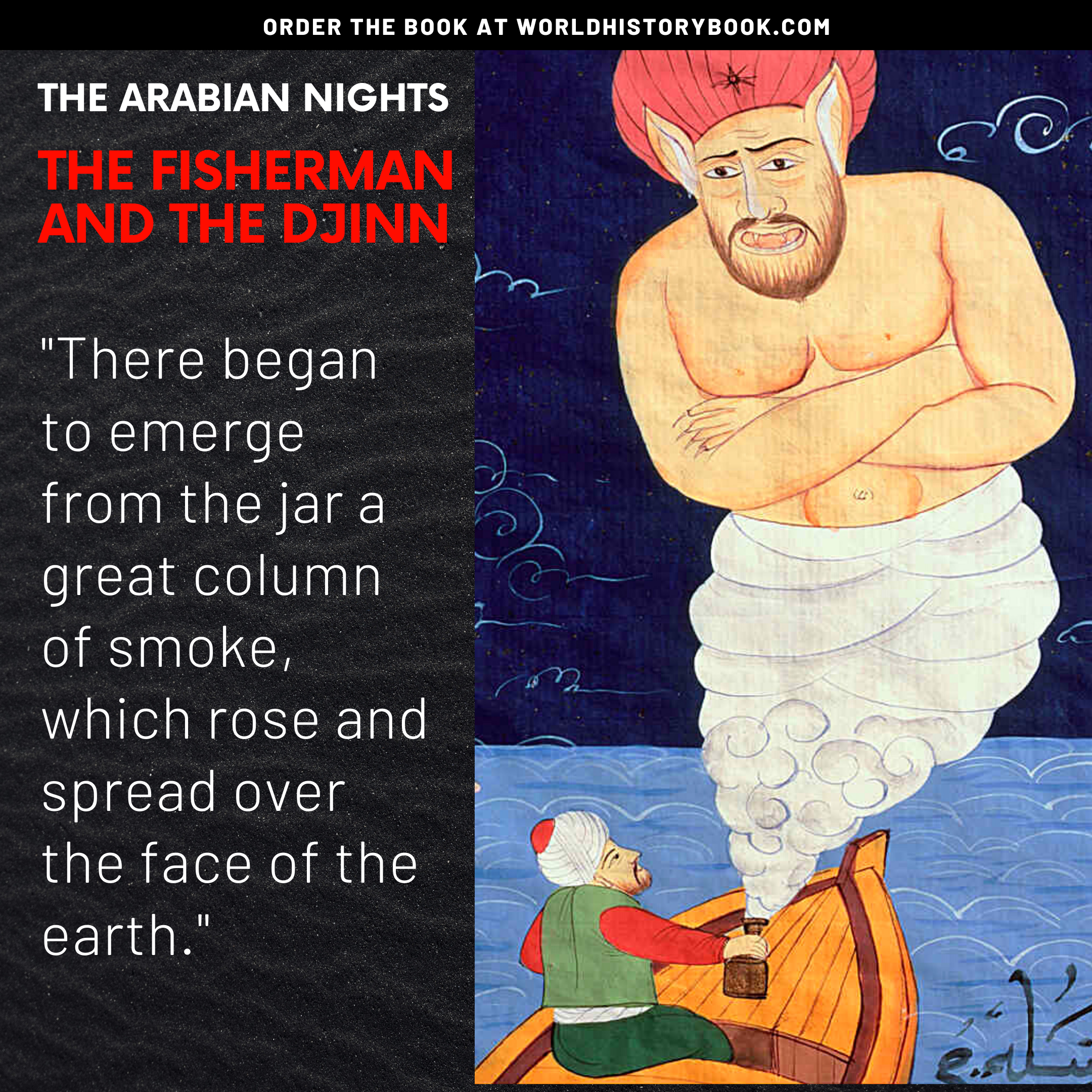 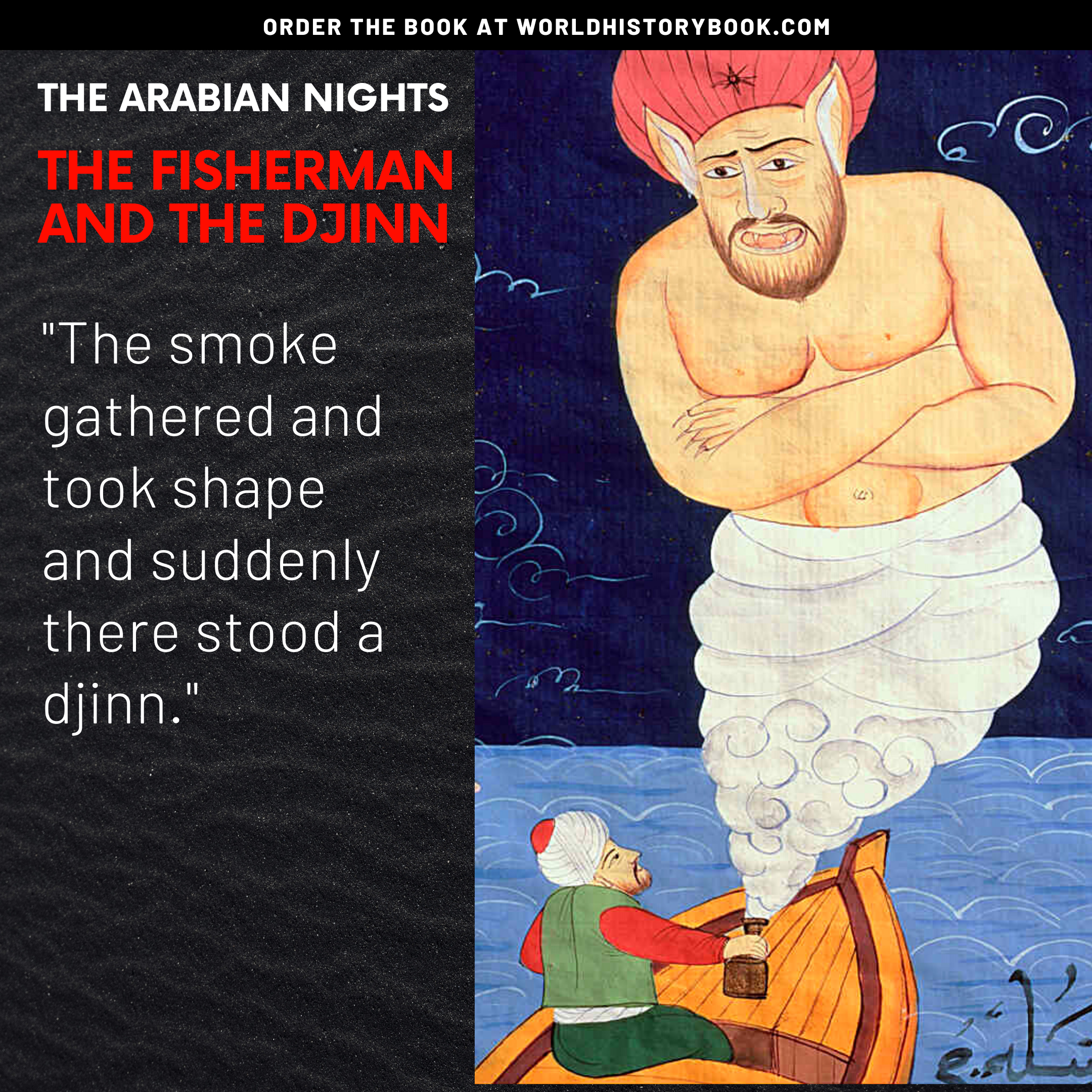 The djinn (genies) were believed to be demons who roam the Earth. Originally, they were part of the pagan relgions of the Middle East and were later adopted by Islam. People often feared the djinn as they were believed to be responsible for causing various diseases and mental health problems. 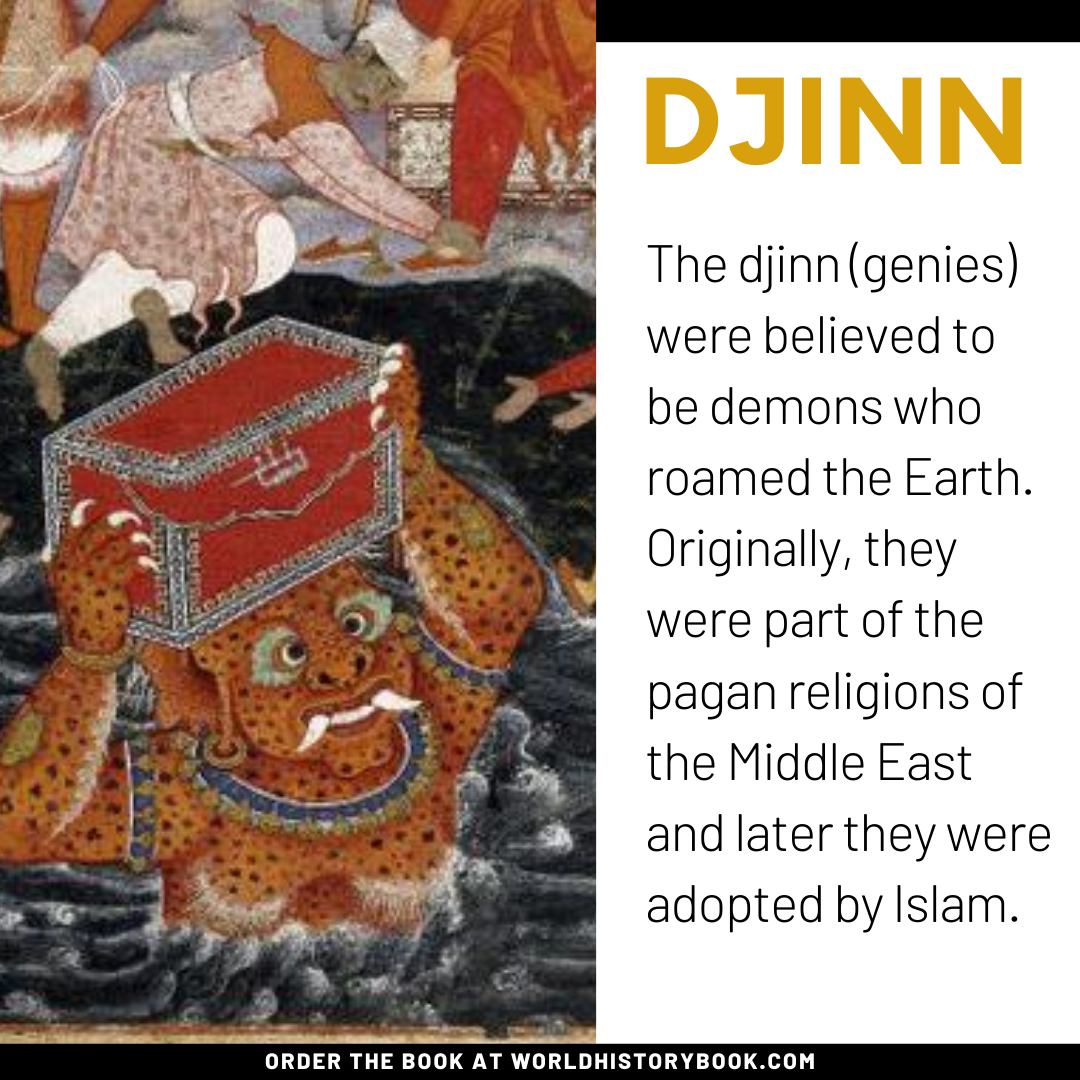 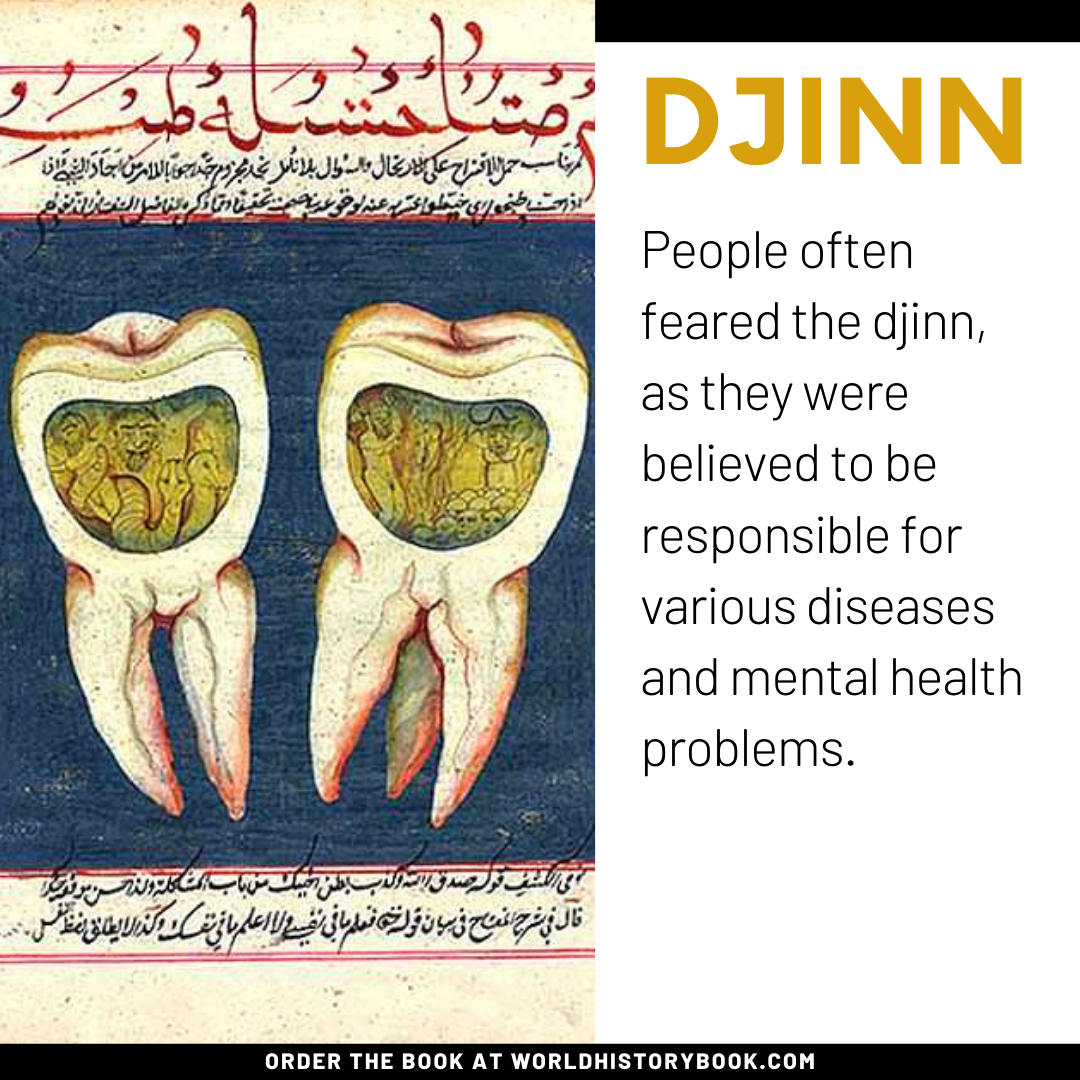 Contrary to popular opinion, the magic carpet is rarely mentioned in the Arabian Nights and does not appear in the original Aladdin. 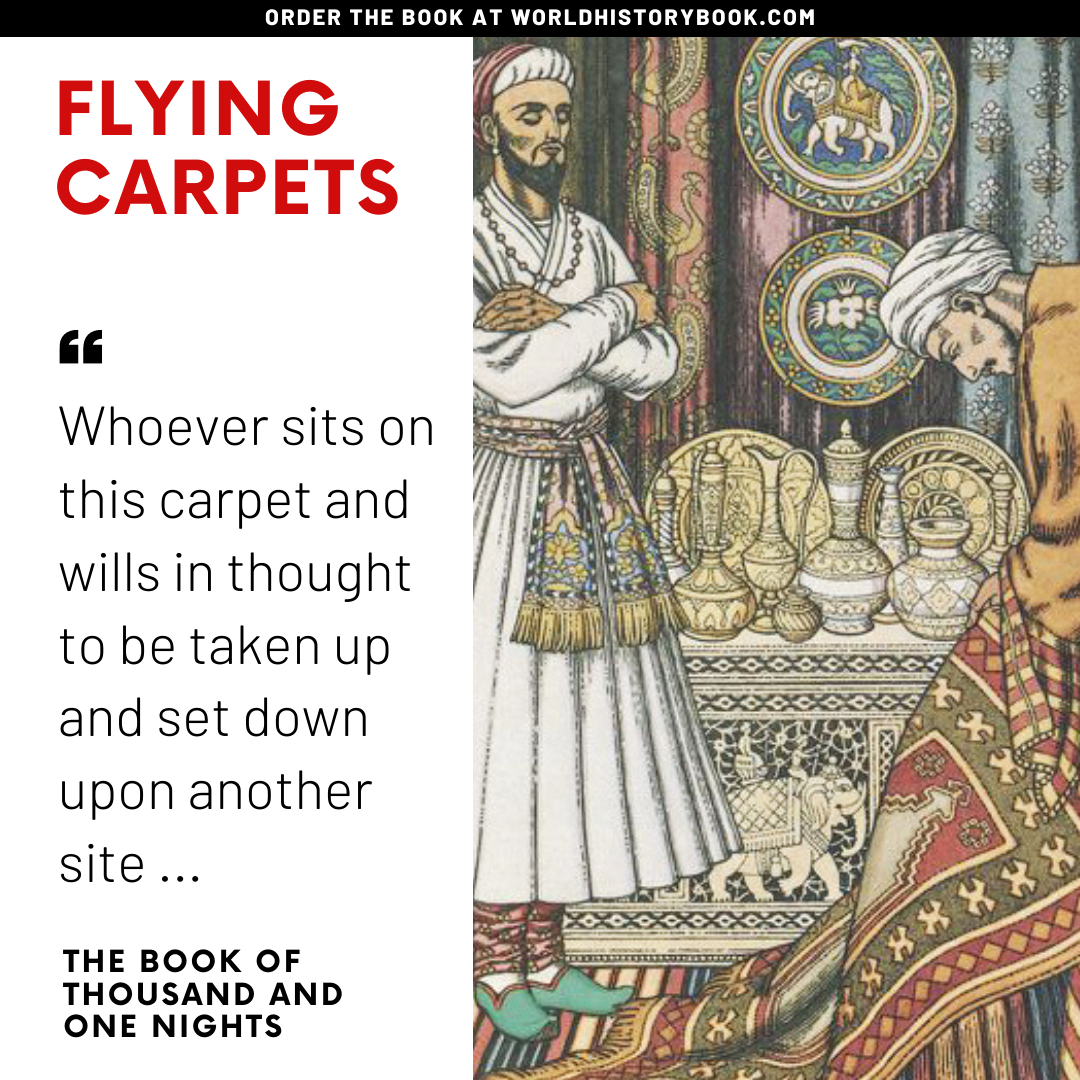 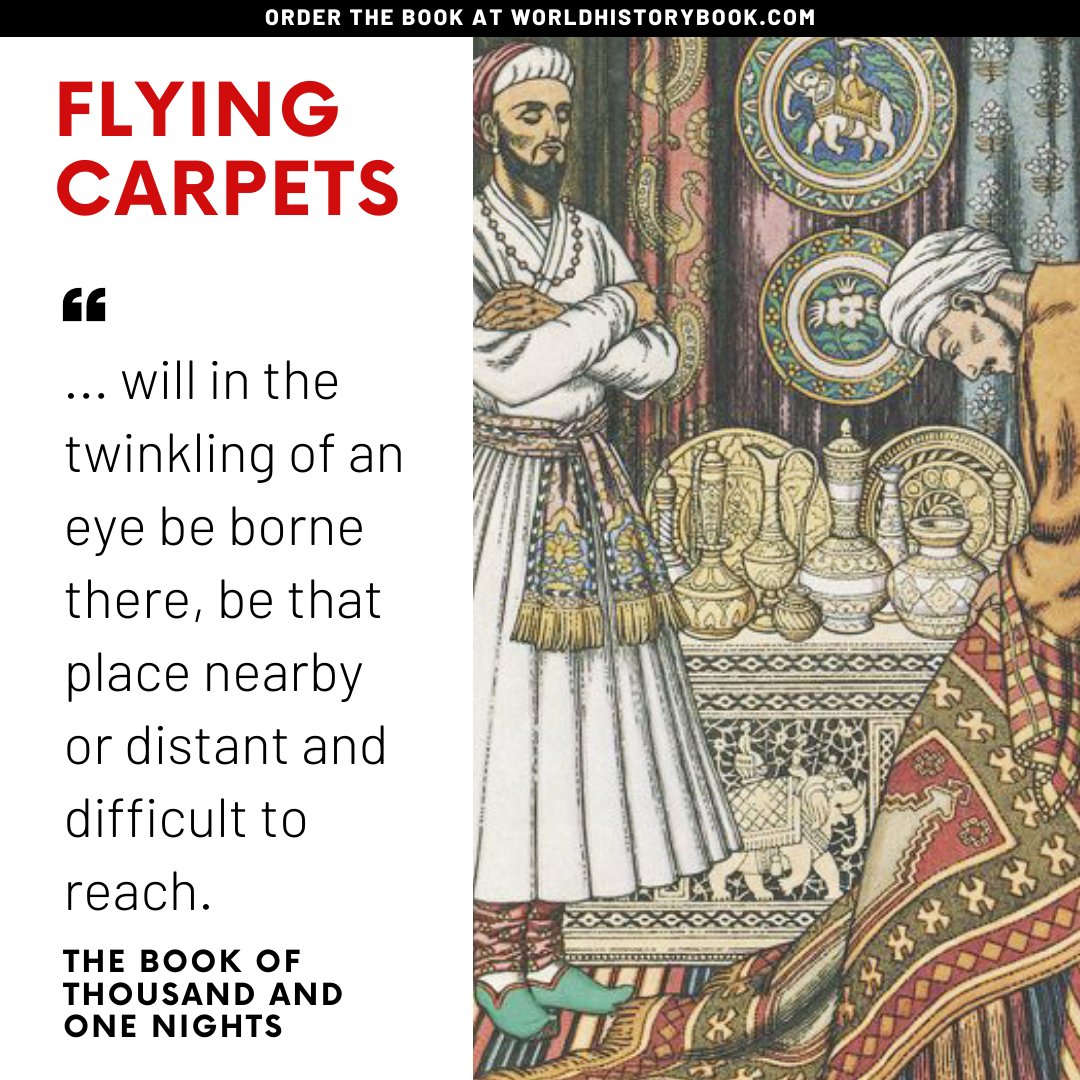 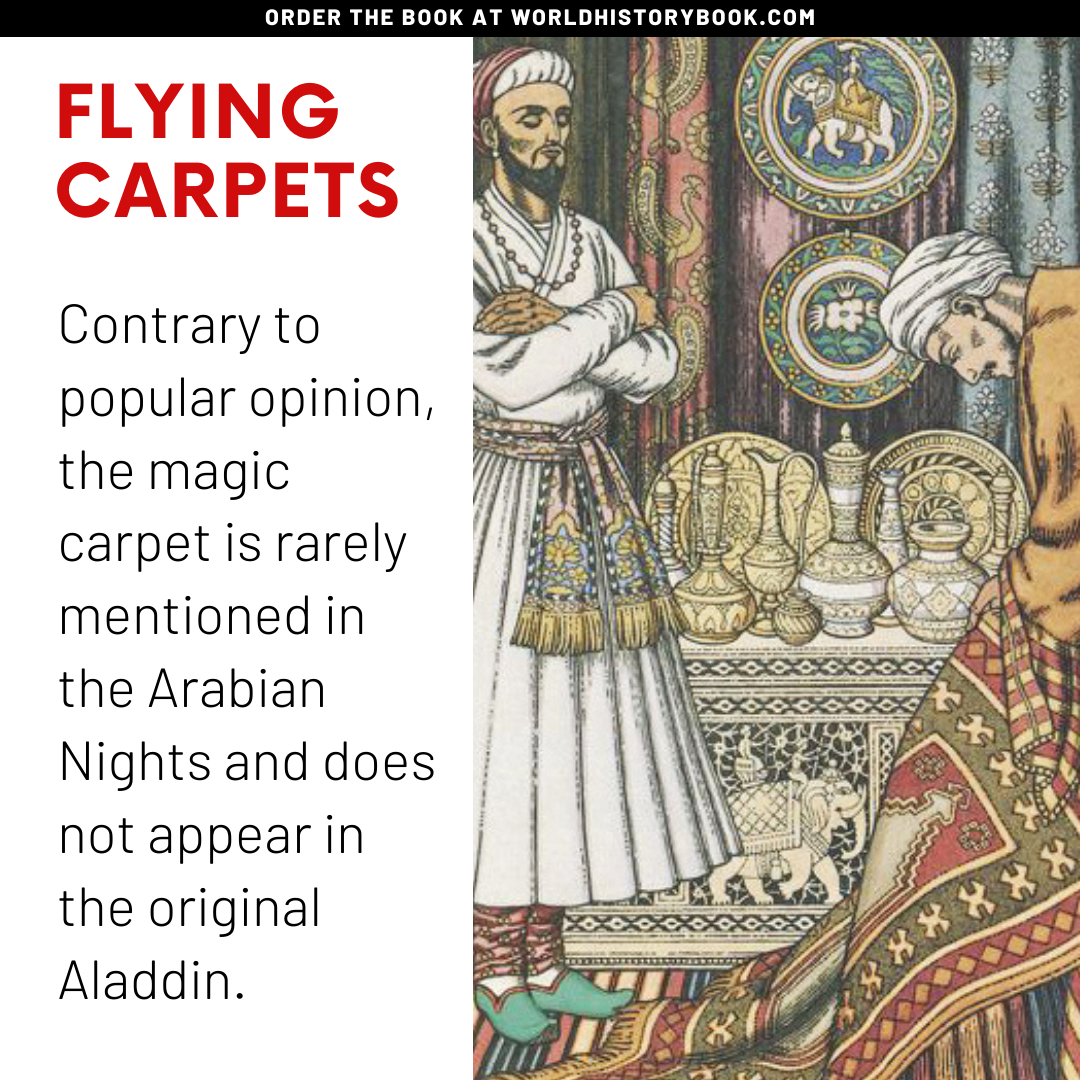